On our journey, through the peculiar world of horology, we have been very fortunate to create new connections and forge lasting friendships. We have also learned a thing or two about what makes a watch stand the test of time. Today, we are beyond proud to present the result of our collaboration with the fantastic people at NOMOS Glashütte: The Atelier DE GRIFF x NOMOS Glashütte Club 36 Limited Edition.

A limited edition (21 pieces) NOMOS Club in 36mm with custom caliberCaliber The caliber ('movement') is the heart and engine of a watch. It consists of a number of interconnected components that work together. Energy is transmitted through the gear train, to the escapement mechanism. The escapement mechanism releases this energy in a controlled manner. This drives the gear train, which ultimately rotates the hands of the watch and keeps time. [More Info], custom specs, and custom dial. It features a customized Alpha caliber, now with NOMOS’s Swing system, their in-house escapementEscapement The escapement is a mechanism in a mechanical watch movement that regulates the release of energy from the mainspring and keeps the watch ticking at a steady rate. The escapement is made up of two main components: the escape wheel and the pallet fork. The escapement is responsible for the ticking sound of the watch, and it ensures that the watch runs at a consistent rate. As the escape wheel rotates forward, it locks and unlocks with the pallet fork, allowing a small amount of energy from the mainspring to be released. This causes the balance wheel to oscillate and the watch to 'tick'. [Learn More]. We also beefed up the specs by doubling the standard water resistance up to 200meters. For the face of the watch, we opted for a gorgeous black sunburst dial and a touch of red on the seconds hand. The watch comes on the fantastic NOMOS bracelet and it ships with a little gift as well. They are available now in our shop. 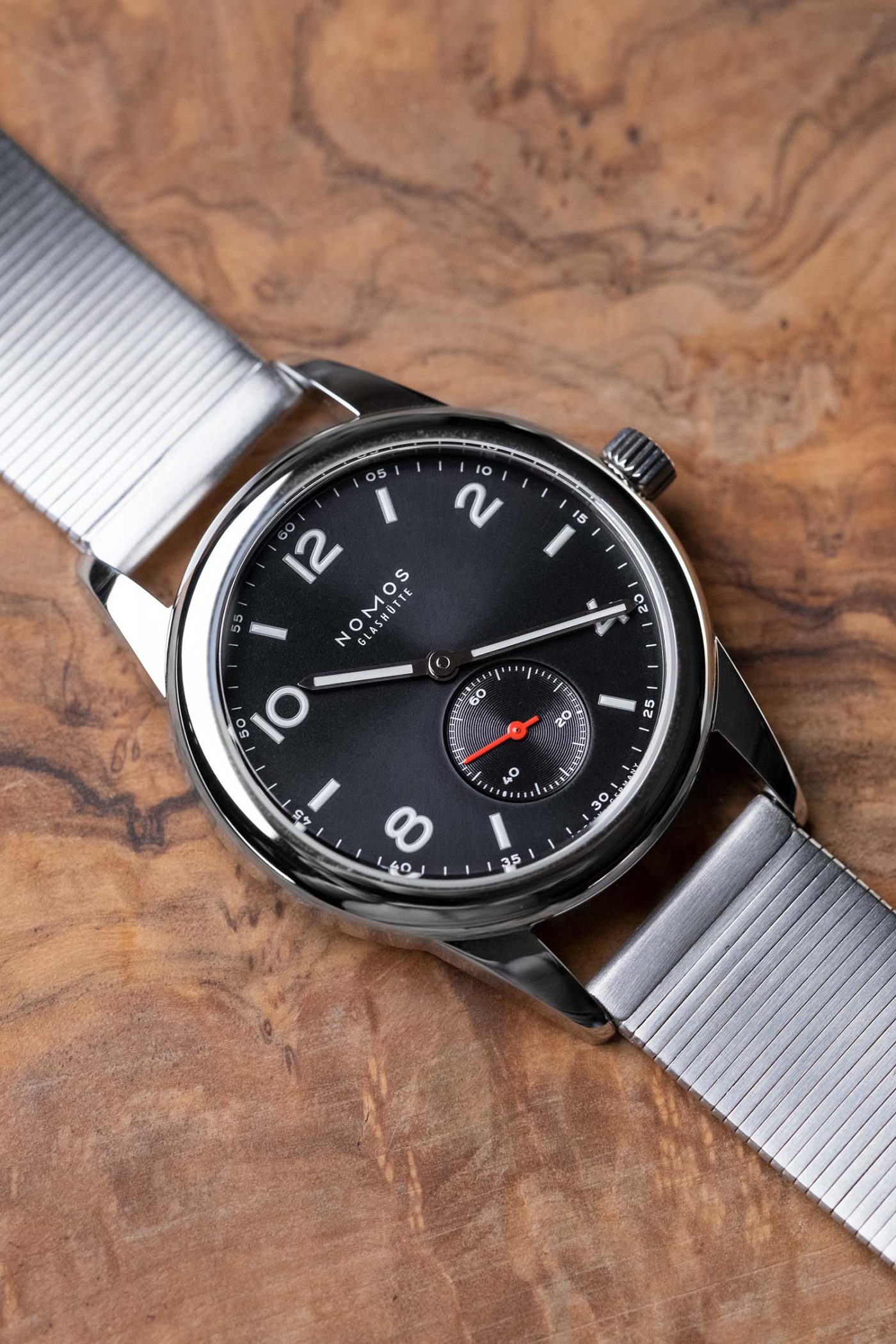 NOMOS Glashütte is the largest manufacturer of mechanical timepieces in Germany. An independent manufacture known for making high quality watches, with a crystal-clear identity and a strong design language (if you have a moment, check out our visit to the manufacture from a while back).

For this limited edition with NOMOS Glashütte we wanted to embrace what makes NOMOS so unique and highlight that in this watch while adding a touch of DE GRIFF magic. 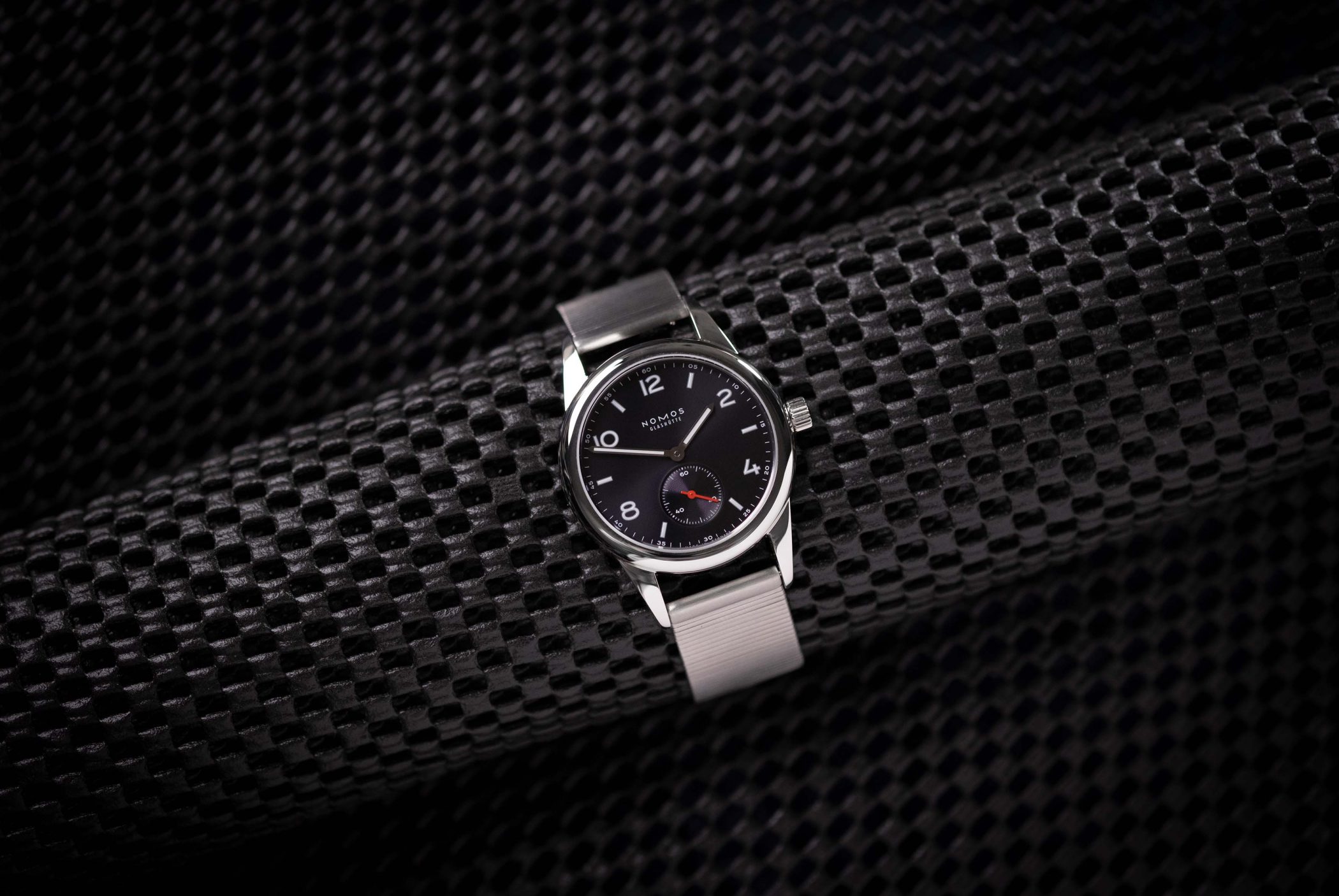 We opted for the Club in 36mm, which is not the obvious choice in today’s watch world. It is the right choice according to us. It has a versatile 36mm by 8.2mm stainless steel case design, and a lug-to-lug size of approximately 47mm. These proportions are right on target for a watch that seeks to answer the fundamental ‘only watch’ question. 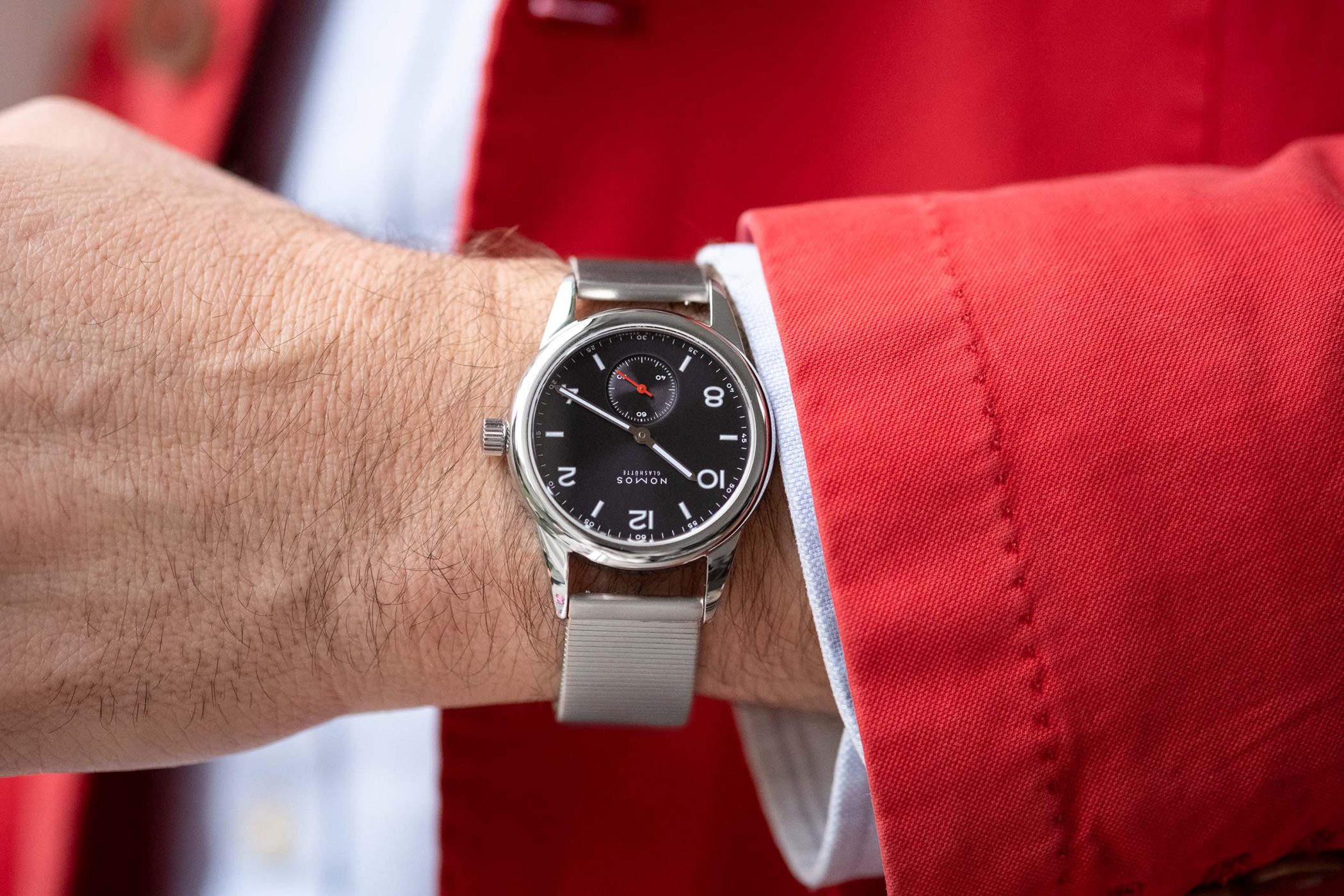 Talking about a one watch collection, such a watch should be able to go anywhere and do anything. As a result, the watch needs to meet a broad range of requirements. From a practical perspective that means we must consider water resistance. Therefore, on this limited edition you will find a new crownCrown The knob on the outside of the watch that you typically use to either wind the mainspring or set the time [Learn More] with a double gasket. The crown, in combination with the screwed in bottom of the Club case, allows us to double the standard water resistance to 200 meters. 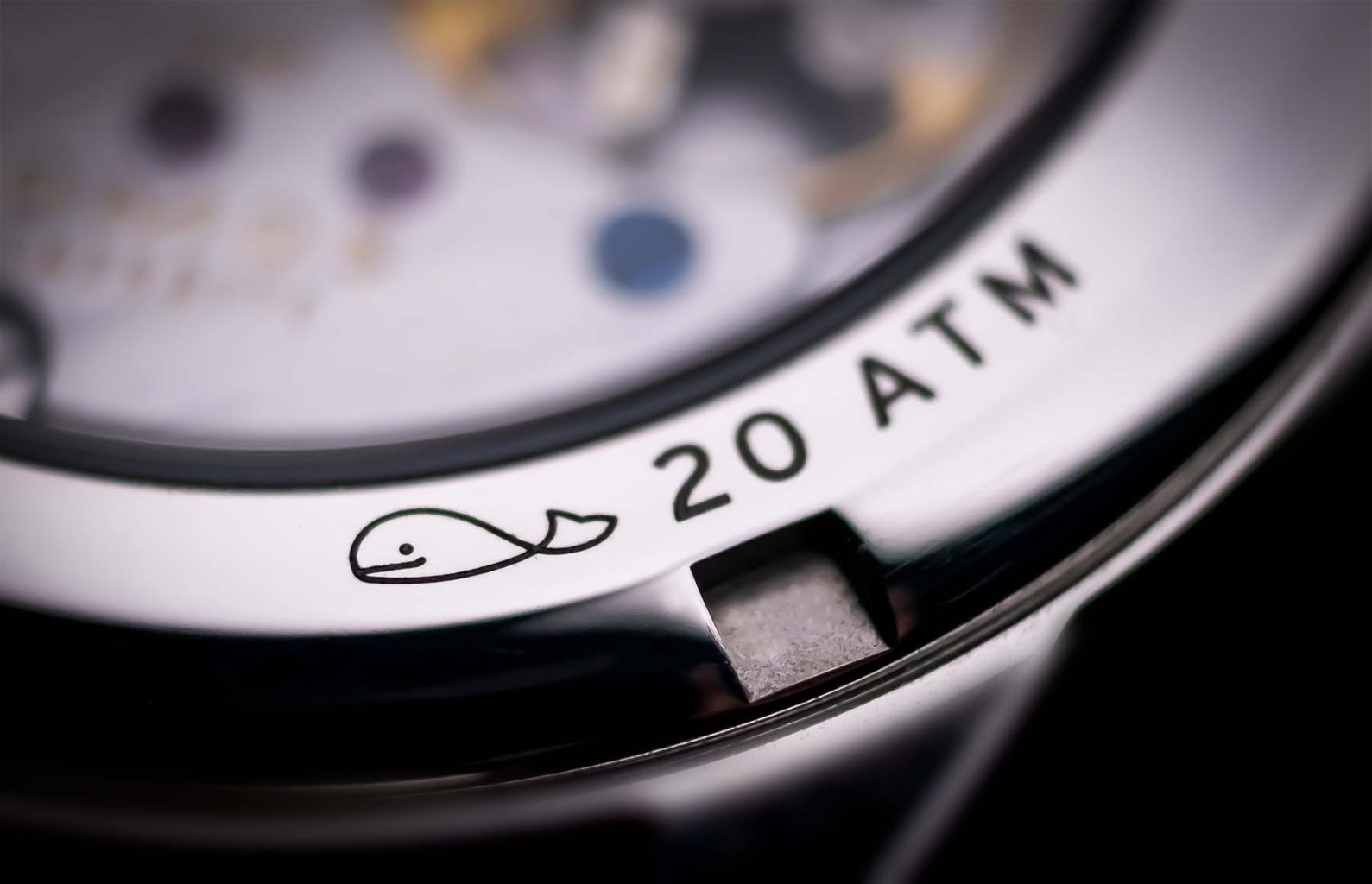 In keeping with the theme, we have also opted for a stainless steel bracelet. The design of this bracelet simply screams NOMOS and also wears very comfortably on the wrist. It features a slide clasp allowing for quick adjustment. The links are brushed and the NOMOS clasp is highly polished. For maximum versatility, the bracelet features quick release spring bars, which makes swapping straps very easy. 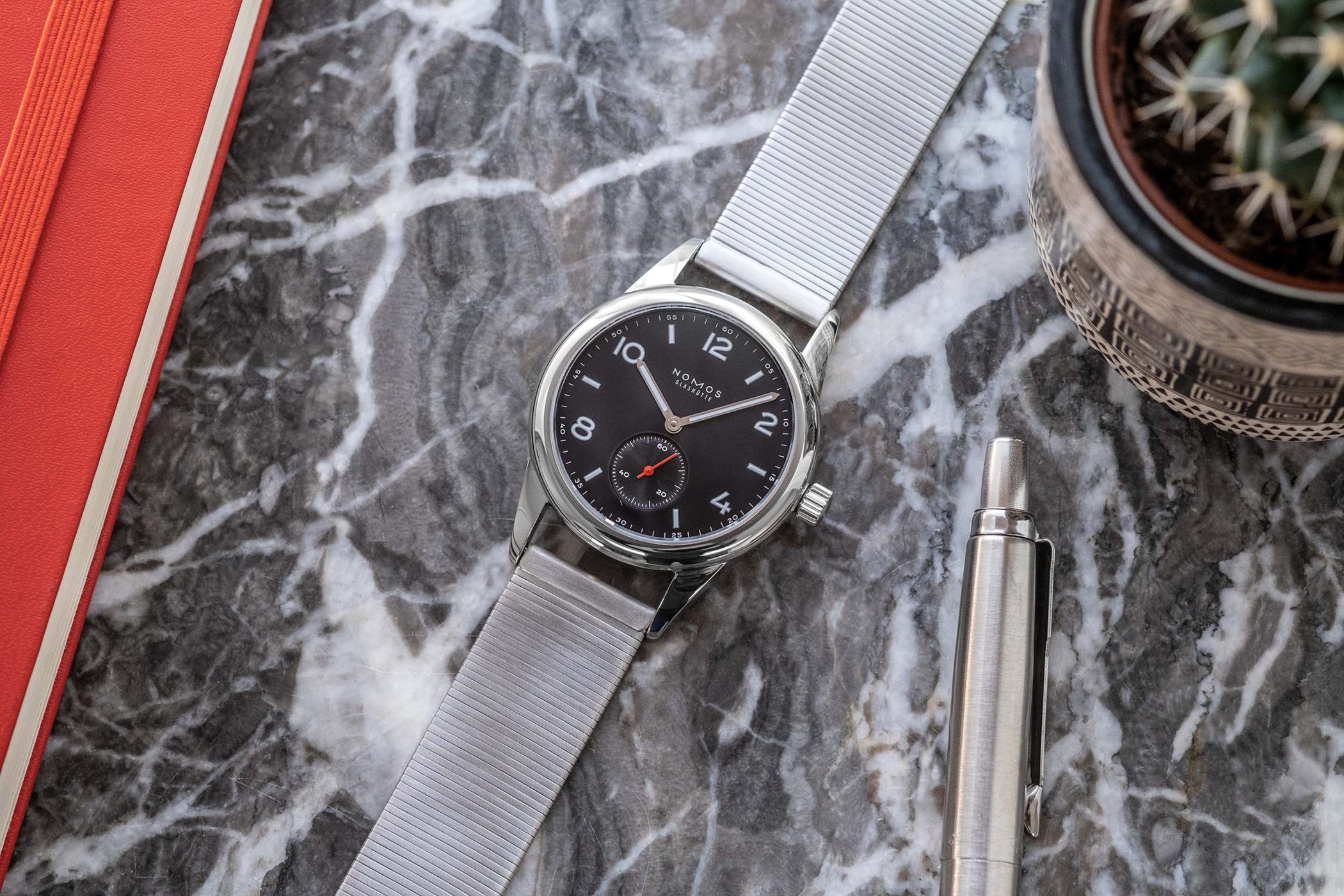 Moving past the case & bracelet properties, we then need to talk about the face of the watch. Presented with a myriad of options we opted for a sunburst black dial which is another first for the 36mm Club. The sunburst effect is first applied on the blank brass dials. This is then followed by metallic refinement with ruthenium in an electroplating bath. Afterwards, a black cellulose lacquer is applied.

As a result, we end up with a warm sunburst effect unlike any other. The soft sunburst effect appears almost matte in broad daylight and it springs to life as soon as an indirect light source hits the dial. 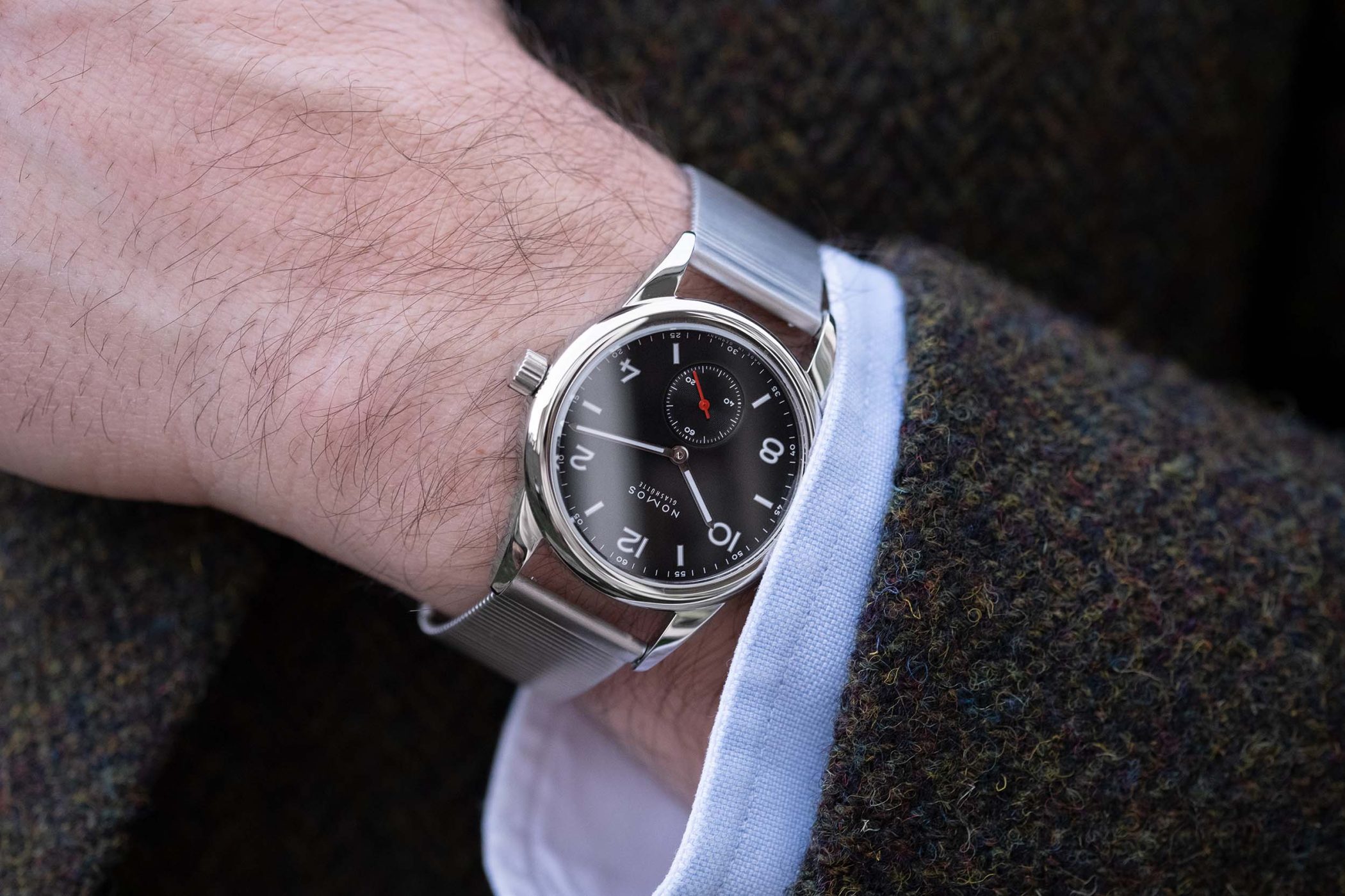 The numerals and indexes are printed and given a generous application of Superluminova. The same treatment is given to the hour and minute hands. Finally, to add a subtle splash of color, we opted for a warm red color for the seconds hand. 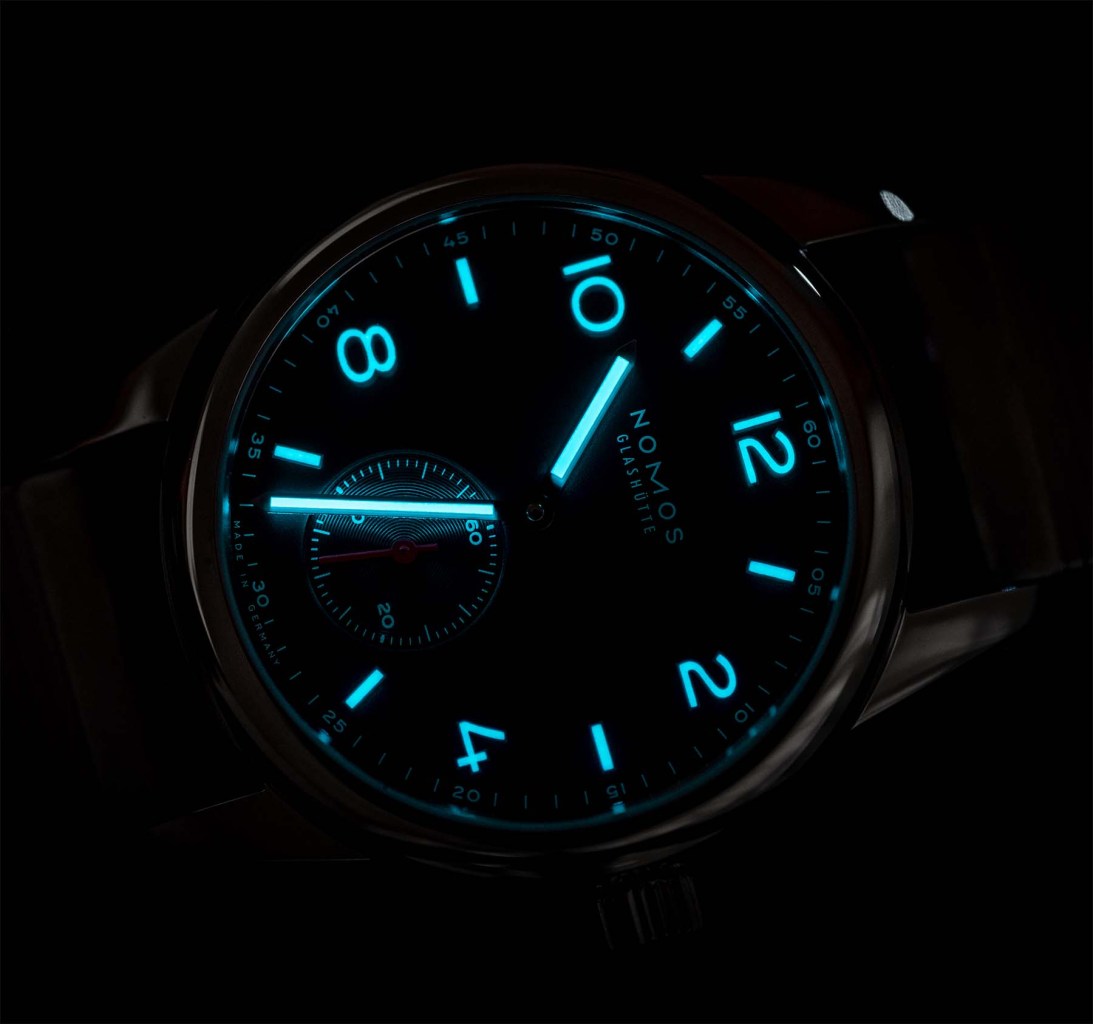 Having discussed the choice of the face of the watch, we need to talk about what makes this watch tick. We opted for a manually wound Alpha caliber with a twist. The Alpha caliber is NOMOS’ very first caliber and a proven work horse. The in-house Alpha caliber boasts a 43 hour power reserveRéserve de marche Also known as Power Reserve. A watch's power reserve refers to the amount of time a mechanical watch can run without being wound. The power reserve of a mechanical watch can vary depending on the size of the mainspring, the efficiency of the gear train, and the rate at which the mainspring releases energy. If a watch has a Power Reserve 'complication' it simply means that the status of the power reserve can be seen on the watch itself (either on the dial or movement side of the watch). [Learn More].

It is a Glashütte caliber which means you are greeted by typical Glashütte characteristics such as a Glashütte three-quarter plate with Glashütte ribbingGlashütte Ribbing A decorative pattern of lines on the plate and bridges of the movement, named after the town of Glashütte where it originated. Similar (yet different) to the better known Geneva Stripes., and Glashütte sunburst decorations on the ratchet and crown wheelCrown Wheel The crown wheel is a gear that interacts with the crown. When the crown is turned, the crown wheel rotates and winds the mainspring. [Learn More]. The tempered blue screwsBlued Screws Not all blue screws are equal. Traditionally heat-blued screws, involves... heat! The blue color is achieved by heating the screws to a high temperature in a controlled and clean environment. This process produces a thin layer of oxide on the surface of the screws, which gives them their distinctive blue color. It is not uncommon to find blue screws on a watch movement that were simply chemically treated, and not heat-blued. [Learn More] add a nice splash of color. 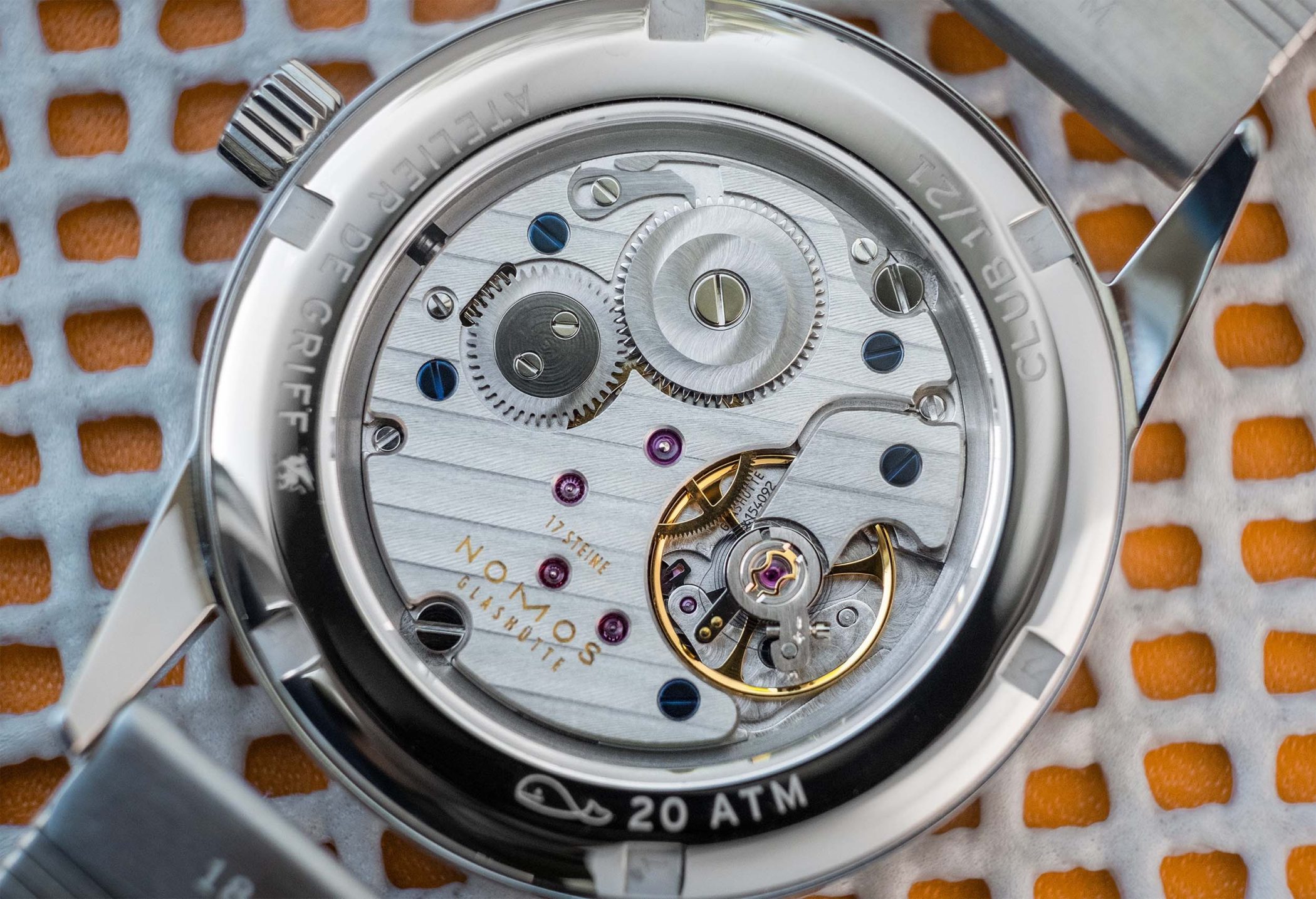 Aiming for something truly special for our limited edition, we added a twist to the tried and tested Alpha caliber. We went straight to the heart of the matter and changed the standard escapement.

Celebrating the year of their release (2021) only 21 will be made and are exclusively available at atelierdegriff.com. This watch is not just a watch, but a celebration. As a result, each watch will ship with a special little gift: The NOMOS Sundial ring in stainless steel, with laser-cut time and month markers. 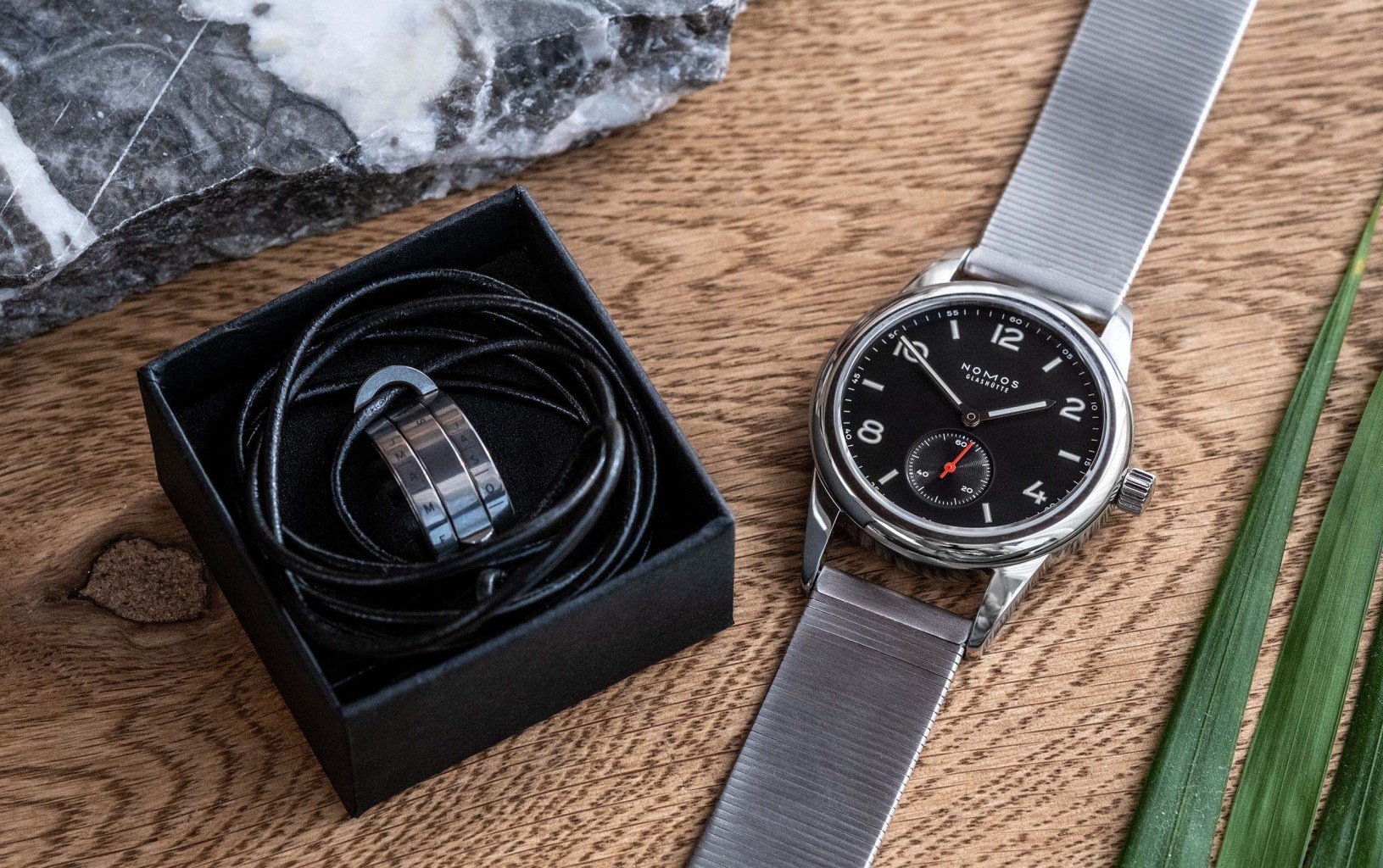