Perhaps the biggest horological highlight of the year so far for me, has nothing to do with any of the 2019 releases. Neither does it have anything to do with Swiss or German releases. Instead, it has everything to do with a Japanese story told by Credor in 2014 by means of its majestic Eichi II. In 2019 I finally had the pleasure to get up close with this absolute masterpiece made in Shiorjiri, Japan. If one were able to distill all that defines the art of watchmaking, the Eichi II would possibly be the glorious result. If you are one of those odd people much like myself who just love the craft of watchmaking, then this right here, is what it’s all about. 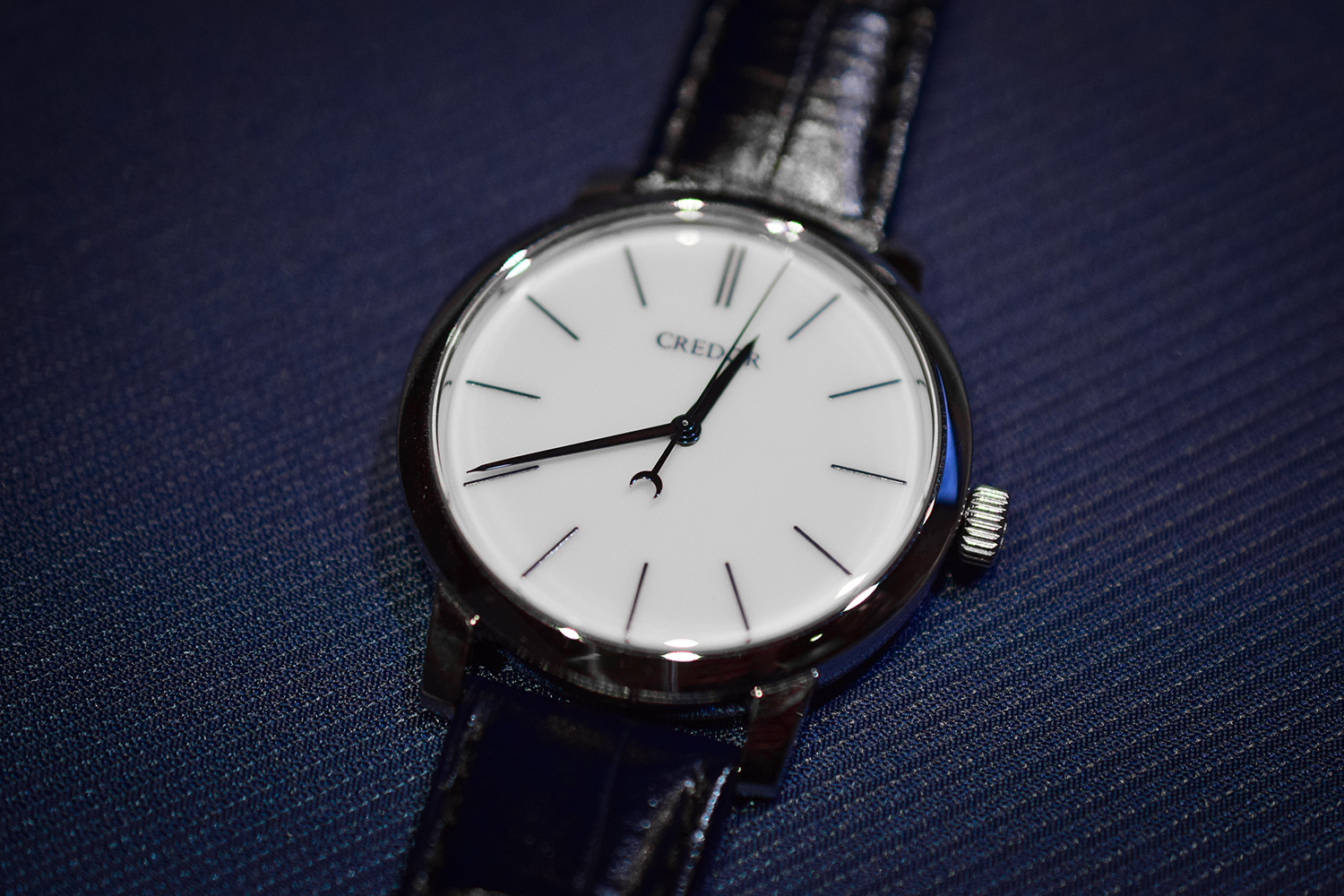 Before I continue, I want to expressly thank the team at Seiko for sharing the extra insights related to this particular piece. Credor is not in any way or shape available in Europe, so any and all information was very much welcome. The response, cooperation and sheer enthusiasm received from the team in Tokyo is one more reason to like what they are doing. In addition, special thanks to Mr Watchwalker for making the impossible possible: A hands-on with the Credor Eichi II. 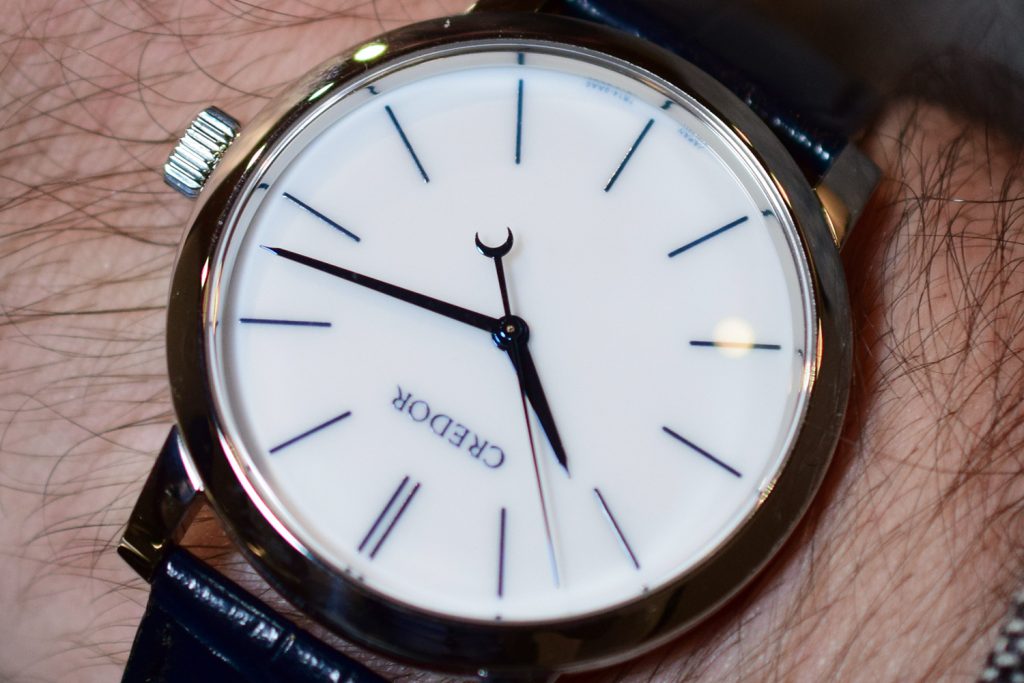 Credor is a luxury dress watch series created initially in 1974. It is essentially at the very top end of watchmaking, not only within the wonderful Seiko watch world, but simply, the watch world. The name is based on the French “crête d’or” which means “crest of gold.” As per Credor ‘”each part, from the movement to the finest component, is made from select materials and produced by master watchmakers, ensuring the enduring beauty and quality of every watch.” The year 2014 marked the 40th anniversary of the Credor brand and was also the year that the Eichi II was released in Japan. That year also marked the 15th anniversary of the Spring DriveSpring Drive A Spring Drive movement, pioneered by Grand Seiko, is a type of mechanical watch movement that combines the traditional mechanics of a mechanical watch with the precision of a quartz watch. It uses a mainspring as the source of energy, just like a mechanical watch, but instead of using a traditional escapement, it uses a quartz crystal to regulate the release of energy. The Spring Drive movement is considered to be highly accurate, and is known for its smooth, gliding seconds hand. [Learn More] movement which, as I’m sure you know by now, is responsible for the smoothest gliding seconds hands this side of the galaxy. 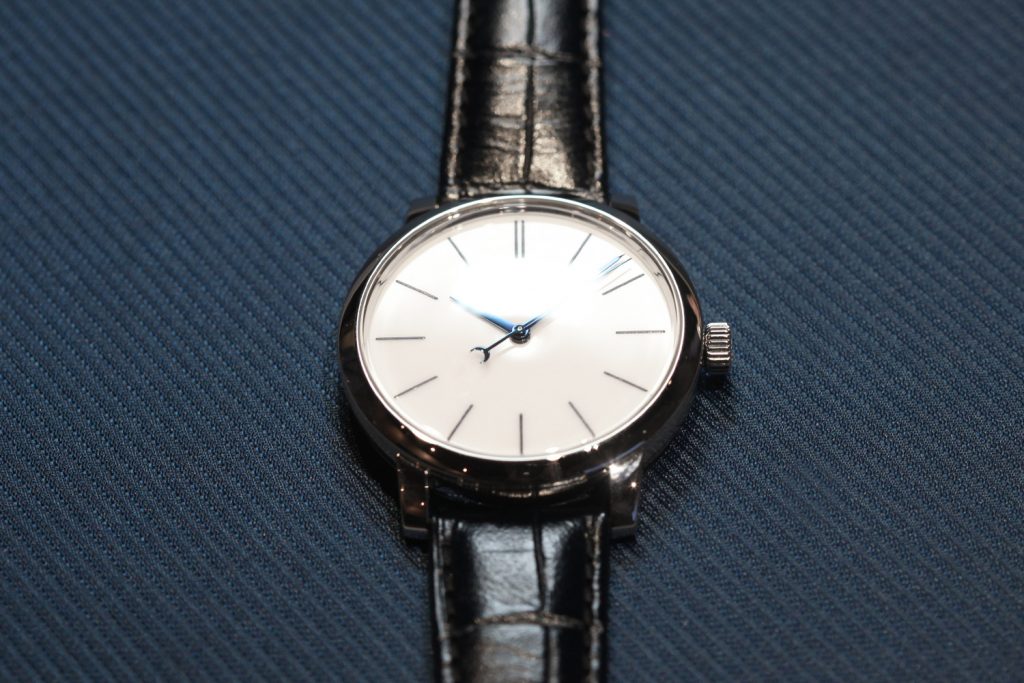 The Eichi II is, as the name certainly suggests, the successor to the original Eichi. That was in its own right already a masterpiece. The Eichi II looks quite a bit different from the original, mainly the reserve de marche which has been moved to the back of the movement and it was also slightly upsized from 35mm to 39mm. Simply put, the Eichi II is a more refined take on the original. The Eichi II originates from Seiko’s Micro Artist Studio, and we all know they take their craft very seriously as reviewed on quite a few occasions here already. 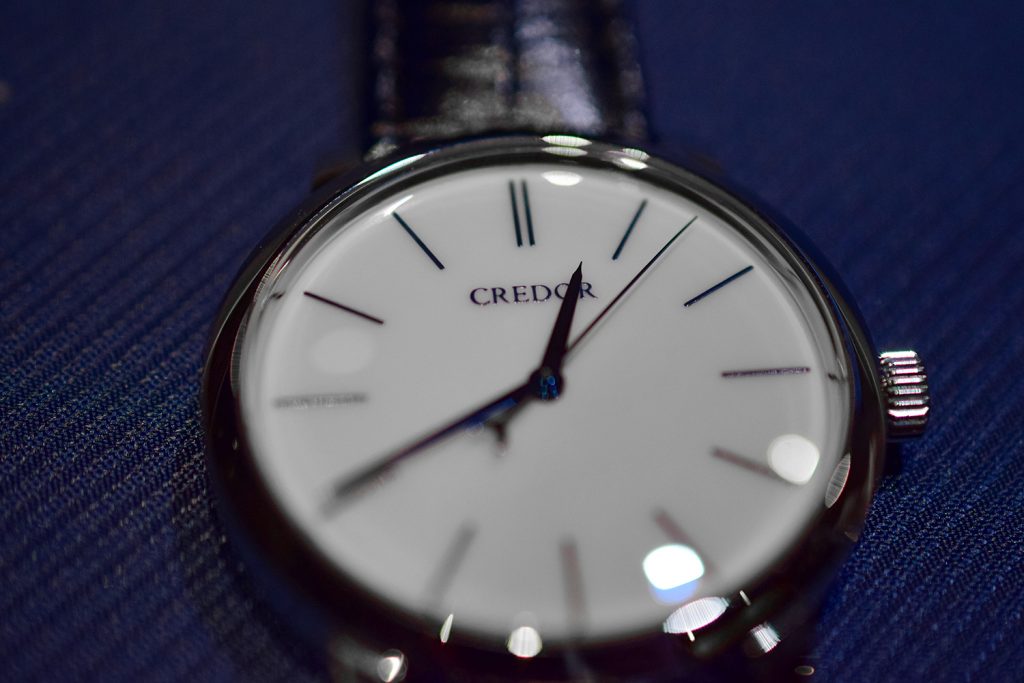 Credor says it employs ‘delicate techniques based on Japanese precision and esthetics` for its series of watches. Having investigated what that could really mean, I would say that the Eichi II can be summarized as being both an example of Wabi-Sabi and Shibui. In traditional Japanese esthetics Wabi-Sabi implies beauty found in that which is imperfect. That difference between a perfectly machined part, as opposed to that slightly imperfect yet handcrafted masterpiece. One leaves you emotionless, whereas the other intrigues. Shibui refers to a particular aesthetic of simple, subtle and unobtrusive beauty. One glance at the Eichi is enough to understand where that can be observed. If you hold wabi-sabi and shibui close to your horological heart, it will be really difficult to beat the Eichi II. If instead, you’re more of a Rainbow kind of person, then of course you might want to look elsewhere.. 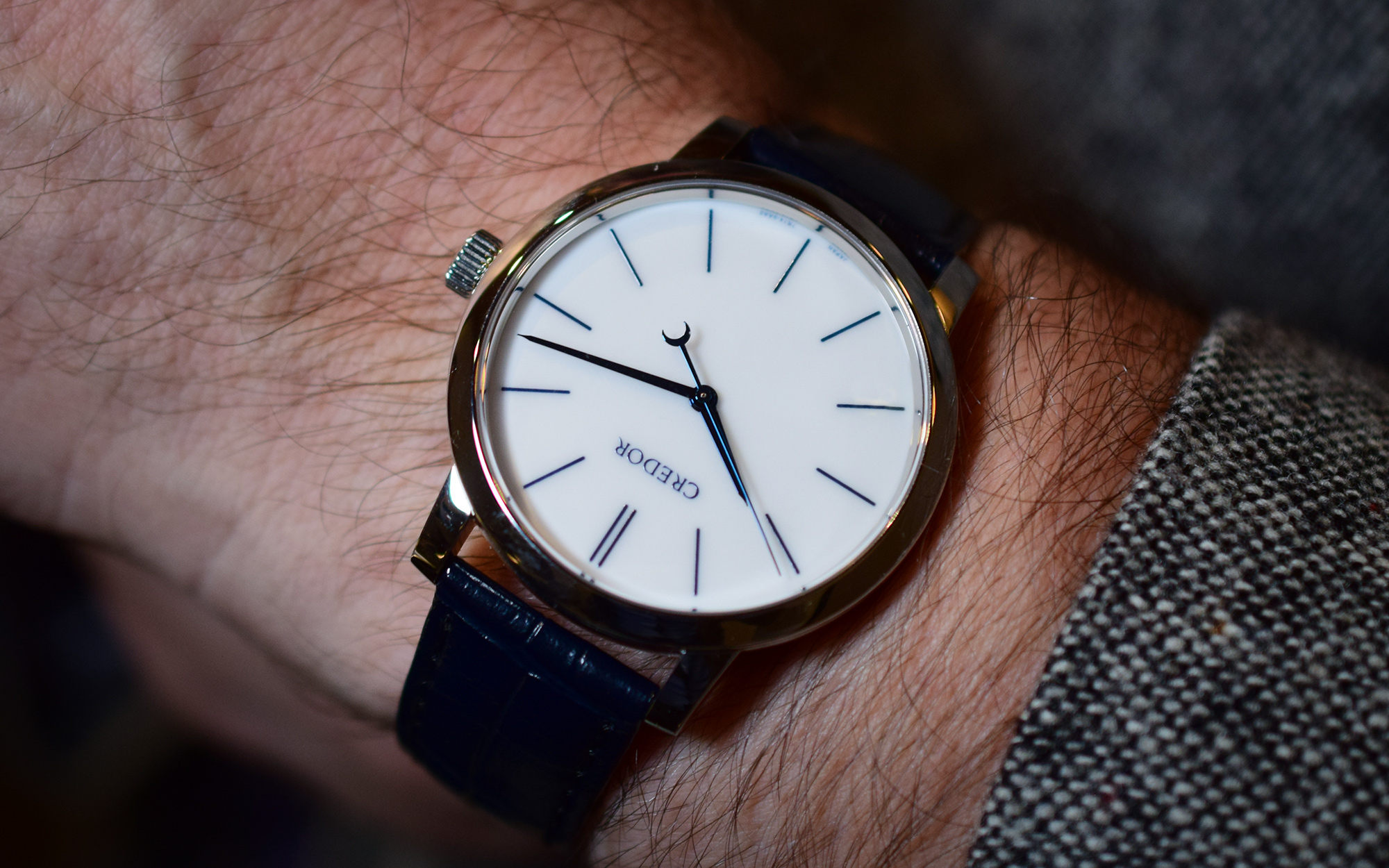 When we were having the time of our life inspecting this watch, someone in the room politely mentioned “A human painted that dial”. While I’m sure part of that was due to the speaker being native Japanese, it was actually the best summary I could give about this dial. An actual member of the human species handpainted that incredibly intricate dial. That somewhere on this planet, a select few members of the human race are able to craft this is almost unbelievable. Humans can be a pretty terrible species, but then there’s this crew, dedicating a lifetime to perfecting their craft. That sort of dedication to perfection is just otherworldly in today’s society. A human painted that dial – enough said. 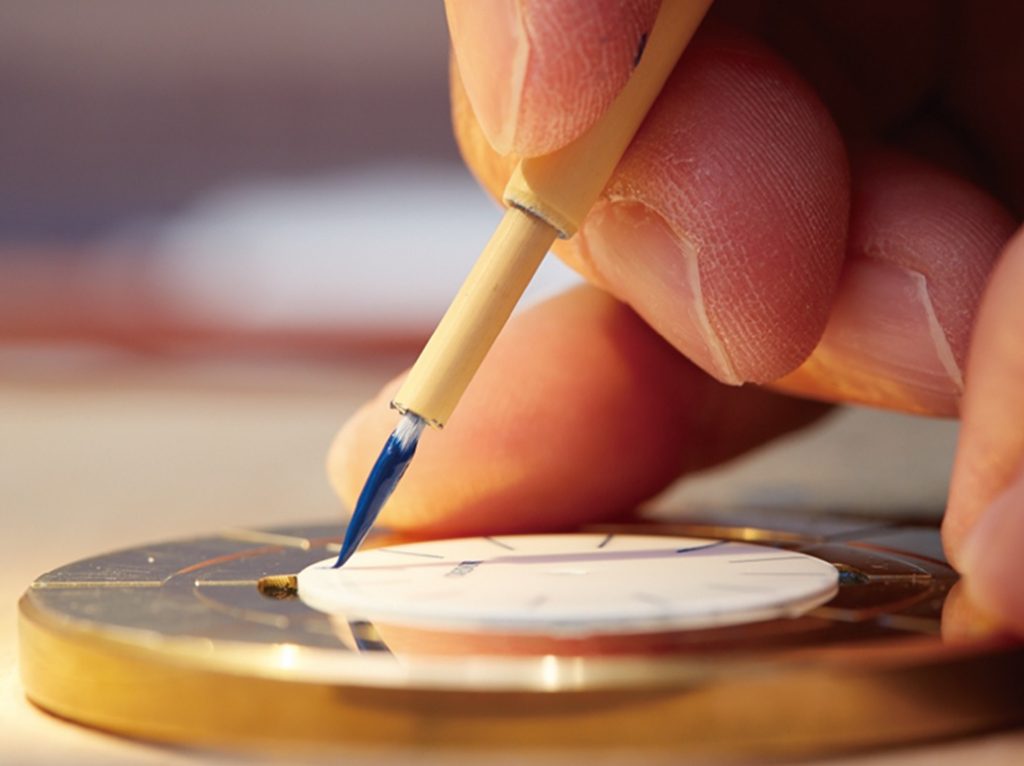 Let’s take a moment to observe the blue handpainted accents here. Just take a moment to take that all in. The paint used on the hour indices is a specially blended deep blue that matches the blue temper hands perfectly. That’s very nice, but what’s simply astounding is that – and I’m repeating myself – everything you see on the dial is handpainted. Not handapplied, not handfinished, but handpainted. I couldn’t even write that nice on a paper if my life depended on it, let alone paint it on a white porcelain dial. The skill required to get them that perfect is borderline human. Not to mention, the discipline needed to be able to resist any cup of coffee or fine glass of red wine which is surely super-human. I wonder if the watchmakers follow a particular diet, like a super athlete, to ensure their hand is as steady as humanly possible. 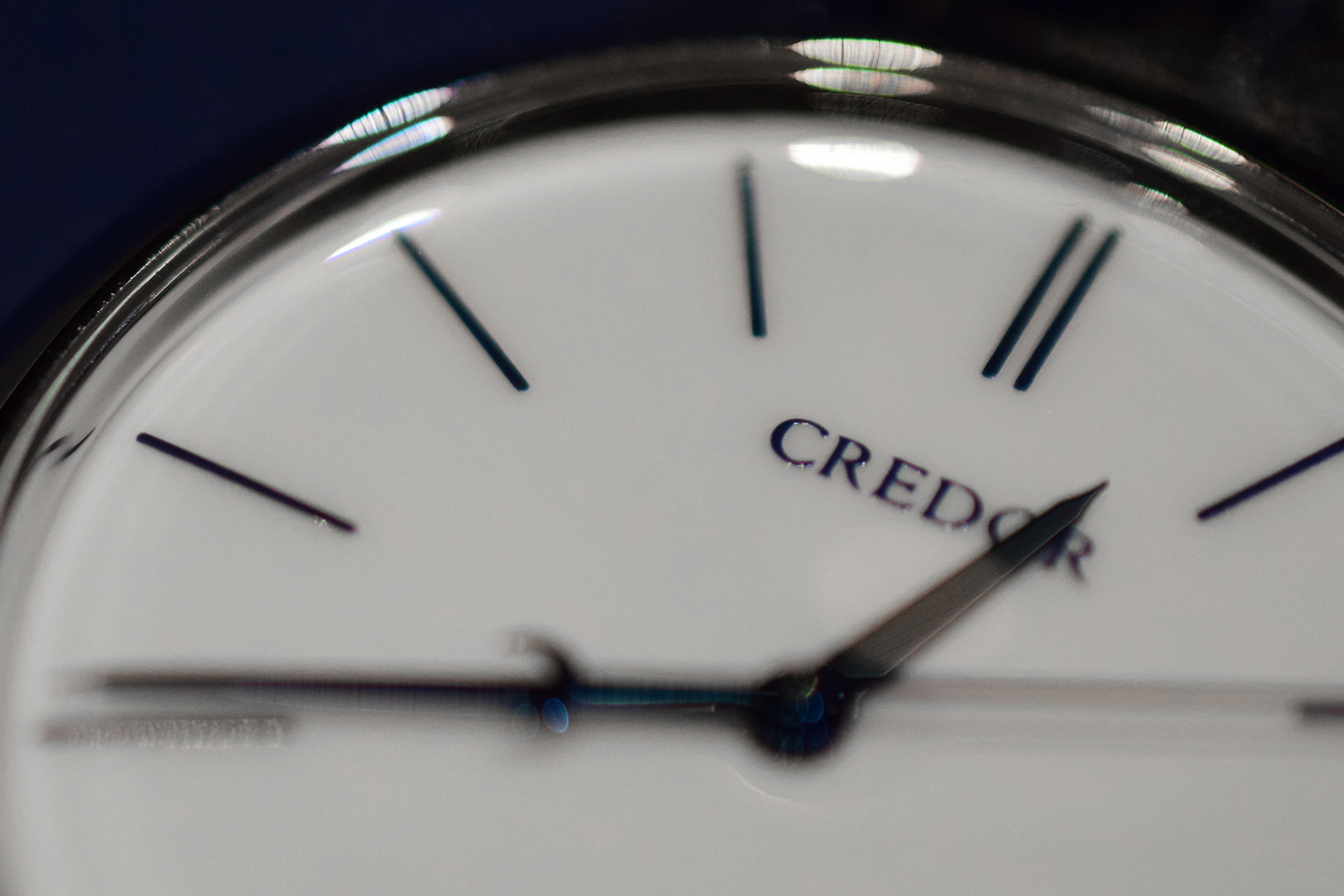 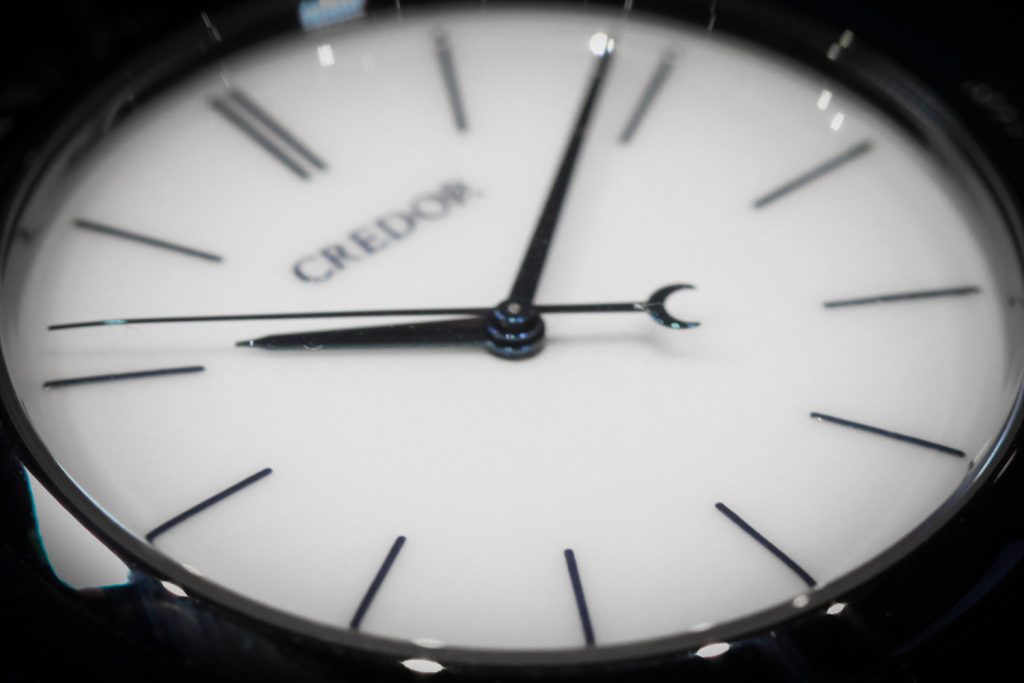 While not visible in the stills, the visually super satisfying seconds hand is flowing smoothly across that porcelain backdrop thanks to the Spring Drive movement. Worth a mention though is that this particular Spring Drive is extra special, it is hand wound. 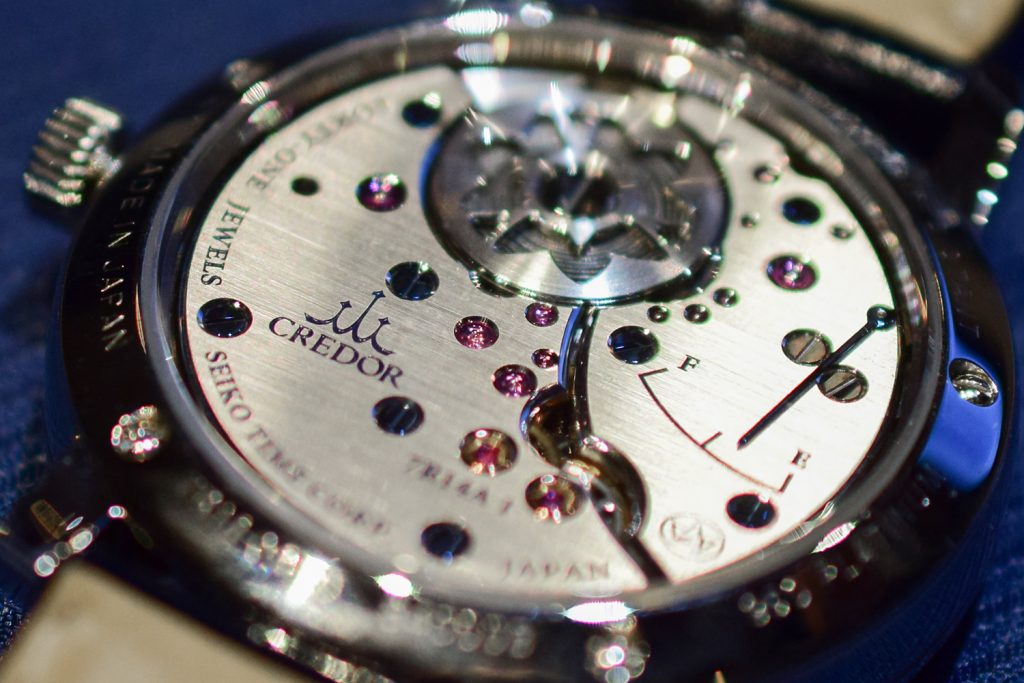 While I’m quoting the insights provided by Seiko here, know that I’m in full agreement: “The movement uses a two-piece bridgeBridges The bridges of a watch movement are the metal plates that hold the wheels and other components of the movement in place. They are attached to the main plate of the movement with screws. Bridges are used to support the balance wheel, the escapement, the mainspring barrel and other elements. Combined with the main plate they are the foundation of any watch movement. [Learn More] structure with the power reserveRéserve de marche Also known as Power Reserve. A watch's power reserve refers to the amount of time a mechanical watch can run without being wound. The power reserve of a mechanical watch can vary depending on the size of the mainspring, the efficiency of the gear train, and the rate at which the mainspring releases energy. If a watch has a Power Reserve 'complication' it simply means that the status of the power reserve can be seen on the watch itself (either on the dial or movement side of the watch). [Learn More] indicator in a well-balanced position, finished simply and dynamically. The contours of the bridge and the beveling around the rubies and holes look striking from any angle, as they are all expertly handcrafted and polished to a mirror-like finish with a circular motion. The circular mirrored finish parts and blue temper screws stand in contrast to the hairline finish of the bridge and heighten the sense of engineering perfection”. 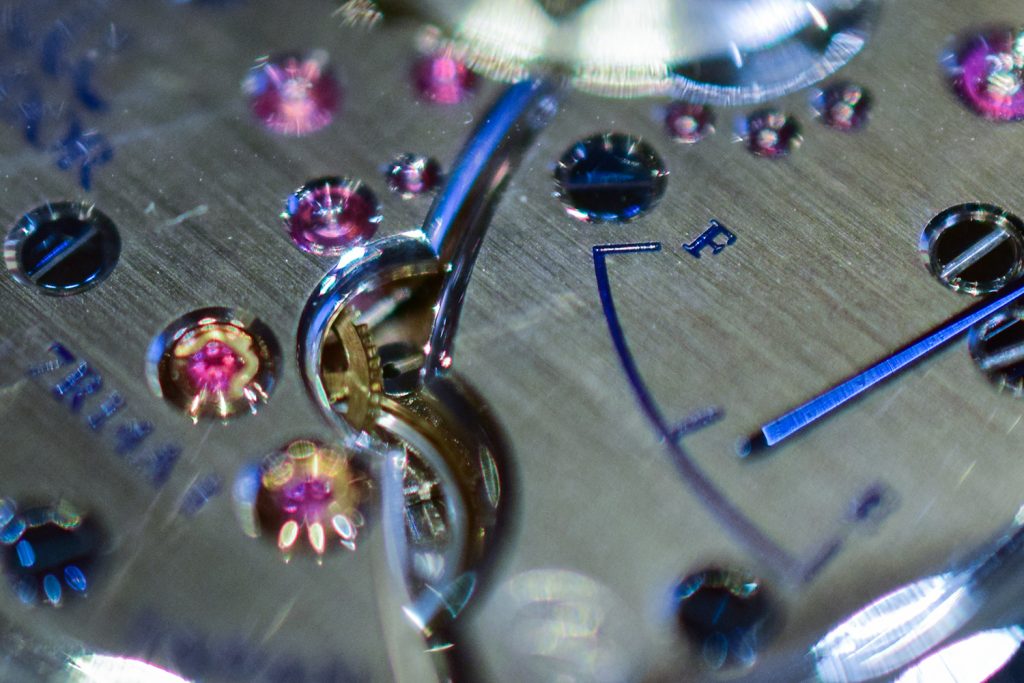 The movement also features Seiko’s torque return system. It maximizes the advantages of the Spring Drive’s high torque. “When the output torque is highest after the mainspringMainspring The mainspring is a spiral-shaped metal spring that stores energy in a mechanical watch movement. It is located inside the barrel. The mainspring is wound, either manually or automatically. The mainspring unwinds over time, and the watch will stop running when the mainspring is fully unwound. [Learn More] has been fully wound (approximately 35 hours), approximately 30% has no effect on accuracy and hand movement and is used to enable the mainspring to wind itself. The effective use of limited energy enables this system to provide a 25% increase in power reserve as compared to the previous caliberCaliber The caliber ('movement') is the heart and engine of a watch. It consists of a number of interconnected components that work together. Energy is transmitted through the gear train, to the escapement mechanism. The escapement mechanism releases this energy in a controlled manner. This drives the gear train, which ultimately rotates the hands of the watch and keeps time. [More Info] 7R88 (hand-winding caliber which has a power reserve of 48 hours). As a result, caliber 7R14 used in the Eichi II as well as its predecessor offers an operation time of approximately 60 hours”. 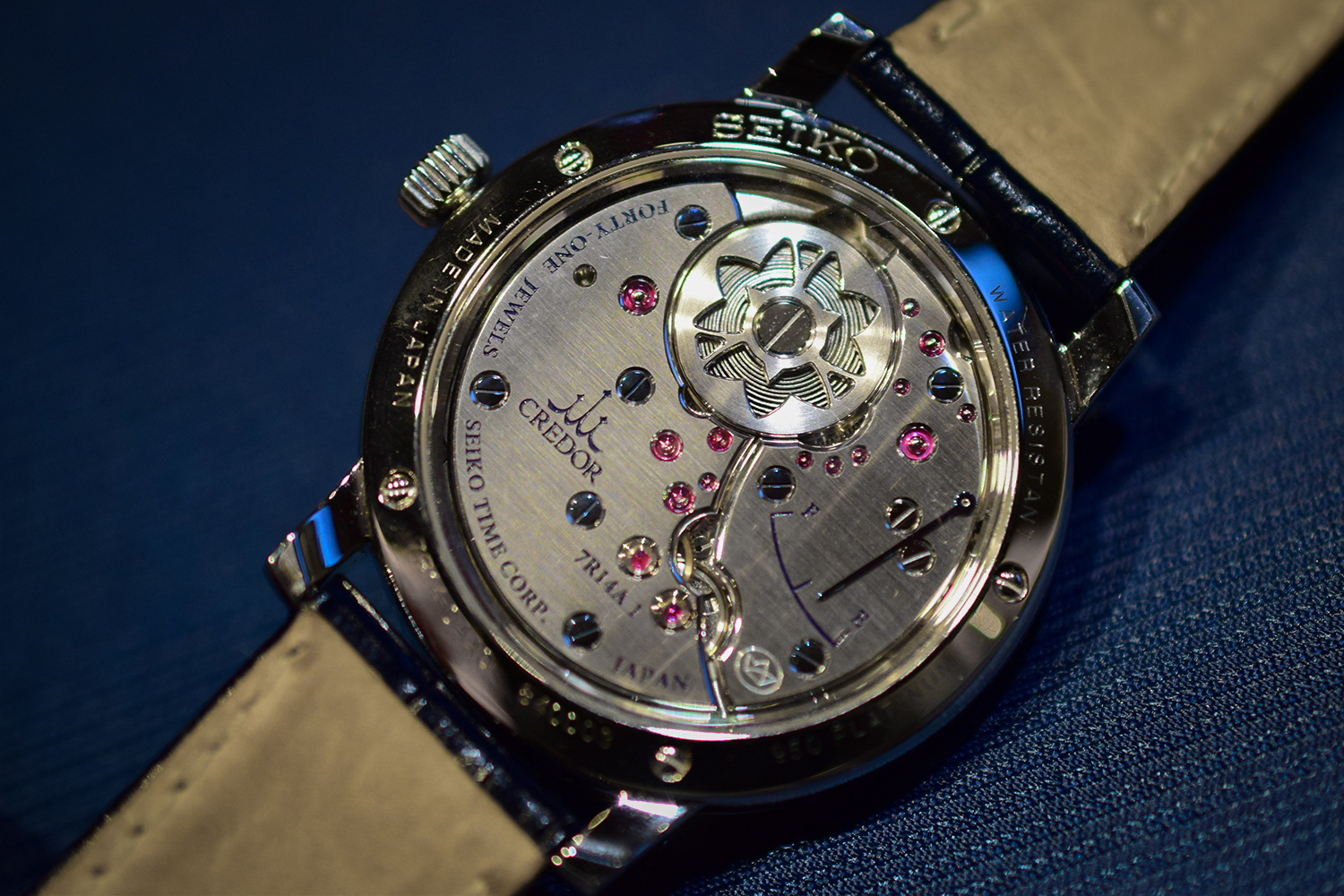 The case is made from Platinum (950) and features a dual-curved sapphire crystal. Overall thickness of the watch is a perfect 10.3mm and an overall diameter of 39mm. 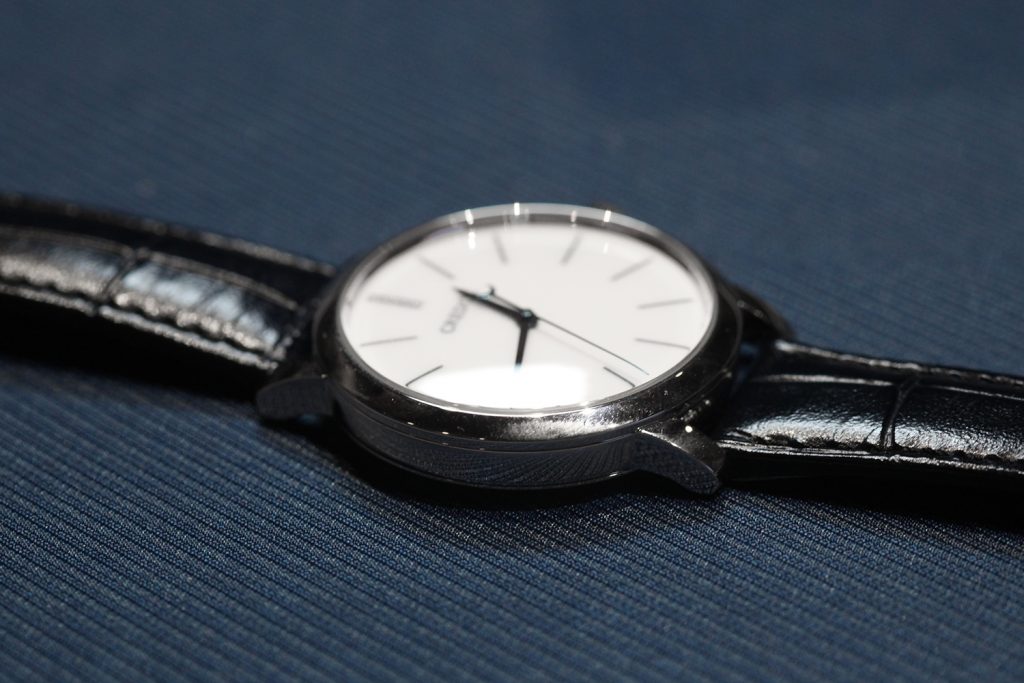 Approximately 20 pieces are made every year. Retailing at approx 50K USD.