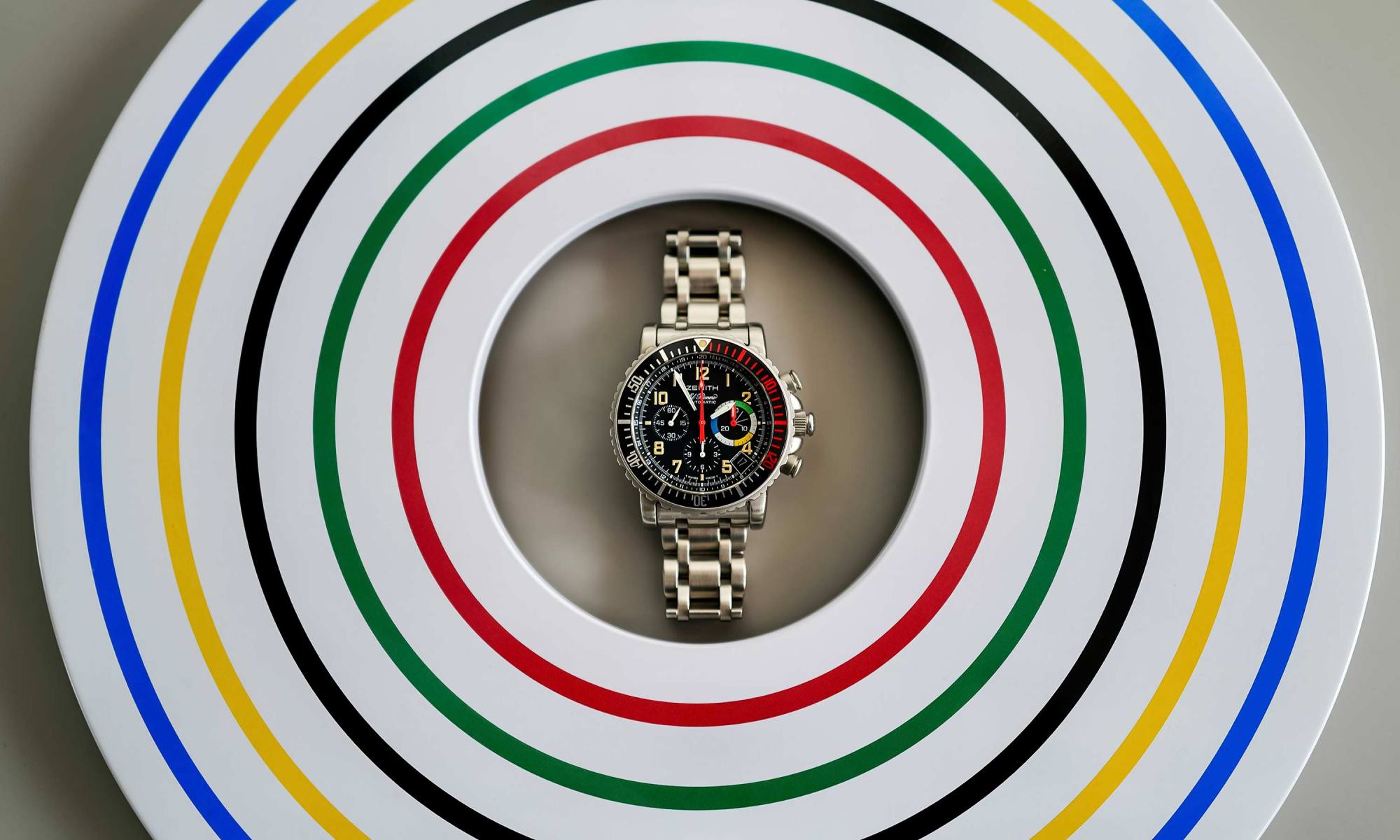 As a Zenith enthusiast I would like to contribute to the knowledge about the Zenith El Primero Rainbow. A watch developed in the nineties, not widely known, yet no less interesting. In this article I will give you an overview of the key facts and figures concerning this line of flavourful sports watches developed by Zenith. I will start from its very inception and take you all the way to the end of the Rainbow. Let’s see if a pot of gold awaits..

During the 1934 race, the New York Yacht Club was challenged by the British Royal Yacht Squadron. The British were the all-time favourite with their Endeavor yacht which was recognised as the fastest yacht at the time and with which they immediately took home the first 2 series that year. The Americans appeared at the start with the Rainbow, a single mast racing yacht built in 1930. The tide turned for the Americans when the British made some wrong decisions in which the Rainbow, as the underdog, took the next 4 heats and with it the overall victory.

I cannot confirm whether that underdog position was decisive for the watch’s name choice, but the fact is that Zenith had been supplying their famous El Primero caliber to Rolex since 1988, who, after modifications, spooned it into their Daytona for the following 12 years.

The Zenith EP Rainbow watch was shown at Basel show 1992 and became available to the public at the end of 1992. It was intended as a sporty waterproof watch with a 40mm case, 20mm lugs, fitted with an anti-reflective sapphire crystal, screw-down crowns and powered by the famous El Primero caliber. Furthermore, it was equipped with a fixed bezel that rotated unidirectional or in both directions, possibly featuring a tachymeter and / or telemeter. This depended on whether one preferred a diving watch or rather a pilot’s watch

The models from the first 3 years all have the text “MODELE DEP” (registered model) engraved on the back. These models are also equipped with Luminova and only later models got tritium. This is one of the few watches that was available so early and originally with Luminova. Tritium was banned around 1999, coinciding with the final production of the Rainbow.

The models after 1996 also have a tritium pearl at 12 o’clock, probably to meet the diving watch standard introduced that year. A typical reference number might look something like “01.362.400”. The first two numbers of the reference refer to the material of the case and strap. Here’s some non-limited overview:

The middle part of the reference number contains 3 digits and refers to the specific version, like with or without telemeter. The last number in this 3-digit series refers to the color of the dial. However, probably because of production technical reasons, you will not find this on the watch itself, only in the catalog. In that position there is always a 0 on the back of the watch, while in the catalog for example a 3 (white) or a 2 (black) will be printed. Finally the last part of the reference, also containing 3 digits refers to the movement used.

Don’t be surprised to see a watch that reads 01/02.470.405 engraved on the case back.  It looks like Zenith used this logic near the end of the series to cover models either with leather strap or with steel bracelet (or both same time).

All in all, not that many Rainbows have been produced. The most popular references in steel may have reached production quantities of 1,600 units. The more exclusive variants, such as the Mango, only a few hundred. There are reference books that speak of 470 copies, but it is not clear whether this only refers to the EP Rainbow or if the Mango variant of the Elite Rainbow is also included.

That Elite Rainbow was added in 1995 and had no chronometer but only time and date function. This diving watch was originally equipped with an ETA 2892 until Zenith reverted to this decision and switched to their own Elite automatic caliber. Those first ETA divers can be recognised by the date window at 3 o’clock and obviously the word Elite was still missing on the dial.

But this article is not about the Elite Rainbow, I’ll limit myself here to the El Primero Rainbow. The EP Rainbow was immediately warmly received by the press and public in 1993. In 1994 the watch won the title “Best Chronograph” in Germany, beating the Omega Speedmaster and the Rolex Daytona, among others. The original EP Rainbow was available in steel with white, black and at the end of production also with an ocher yellow dial. The latter was immediately given the nickname Mango. It is the most exclusive steel version and therefore a very popular object for collectors.

In two-tone version there was also a dark blue dial available. The 18k gold version was available with a creamy ivory or black dial. There are also some versions known with a bezel set with 58 diamonds, both in steel as in gold version. As far as I know there have only been yellow gold versions, no white or pink gold. At the Basel show in 1997, another chapter was written when the Flyback version of the EP Rainbow was presented. The indirect reason for the Flyback goes back to 1995 and is a story in itself.

In May of that year, the French Air Force opened a tender for the delivery of a suitable pilot’s watch. Story goes that it was the army’s intention to yearly order 1000 watches and this for 4 consecutive years.  Zenith took part in the tender and, in order to meet the specific requirements of the Air Force, had to adapt the existing caliber, thus modifying the EP400 caliber into the EP405 caliber. Most drastic adjustment was the Flyback function, meaning you did not have to press the start / stop button at 2 o’clock to start a new time measurement. You just pressed the reset button at 4 o’clock and a new timing started automatically from 0 seconds (12 o’clock position).

Further changes for military purposes included the replacement of the screw-down upper and lower crowns with normal push buttons, a bezel with larger and irregular serrations, a bright red second hand, a red twenty-minute index on the bezel, a fully matt satin finish on both case and strap, the use of aeronautical sector colours for the minute dial at 3 o’clock and a back with no image of the Rainbow ship, instead featuring a Zenith shield logo.

All of the above features had a functional reason including better reading under all type of circumstances, stealth appearance, navigation via radio or enhanced operation during flight.  This made the Rainbow probably the last mechanical watch of any brand that was specifically developed or modified for military purposes.  A few months later, Zenith delivered a box containing the first 6 units to the Air Force to start the initial testing program.Unfortunately, new elections were called in France in November 1995. The military budget tap was turned off and the entire tender ended up in the trashcan.

Zenith then decided not to instantly write off the development work and instead brought the Flyback variant to the Basel show in 1997. Not only in the newly developed functional and colourful military specification but also in a more discreet civilian version with a black & white scheme.

The military version by the way does not have a Flyback inscription on the dial, the black & white version does. Next year we will be 2022 and 30 some years later.  Dear Zenith, how about a Rainbow revival edition? In Mango colour please?