Who doesn’t know Timex? The company who last year took us back to the 70-ties and 80-ties with the fabulous Pepsi style Q reissue, was founded in 1857 as the Waterbury Clock Company and in 1944 reformed to Timex Corporation.

Many children grew up with the brand and some very famous adults have been spotted wearing a Timex watch including several US Presidents such as Clinton or Bush junior who’s Timex was famously stolen while greeting a crowd in Bulgaria back in 2007. But also celebrities like Chuck Norris, Mark Wahlberg, Steve Carell, Leonard Cohen have been seen wearing a Timex in private life.

Timex became famous in 1992 when they introduced the Indiglo night light. Famous because few months later, in February 1993, an office worker wearing a Timex with an Idiglo night light used its light to guide a group of evacuees down 40 dark flights of stairs when the WTC bomb attack took place. From one hero story to the next (cartoon) hero is a small step. 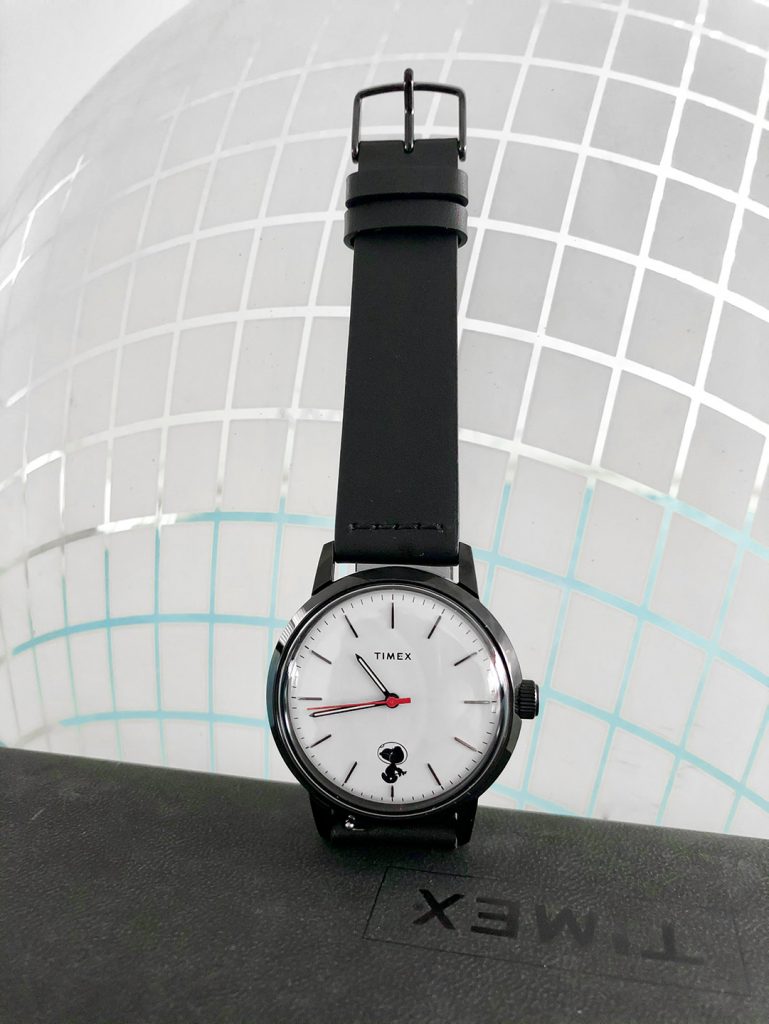 In today’s lineup Timex carries at least 12 watch models depicting Snoopy on the dial, many of these being children’s watches. While most models are quartz, some “grown up” automatic Marlin models are on offer as well. One of them being the Marlin Snoopy Space Traveler described here below. 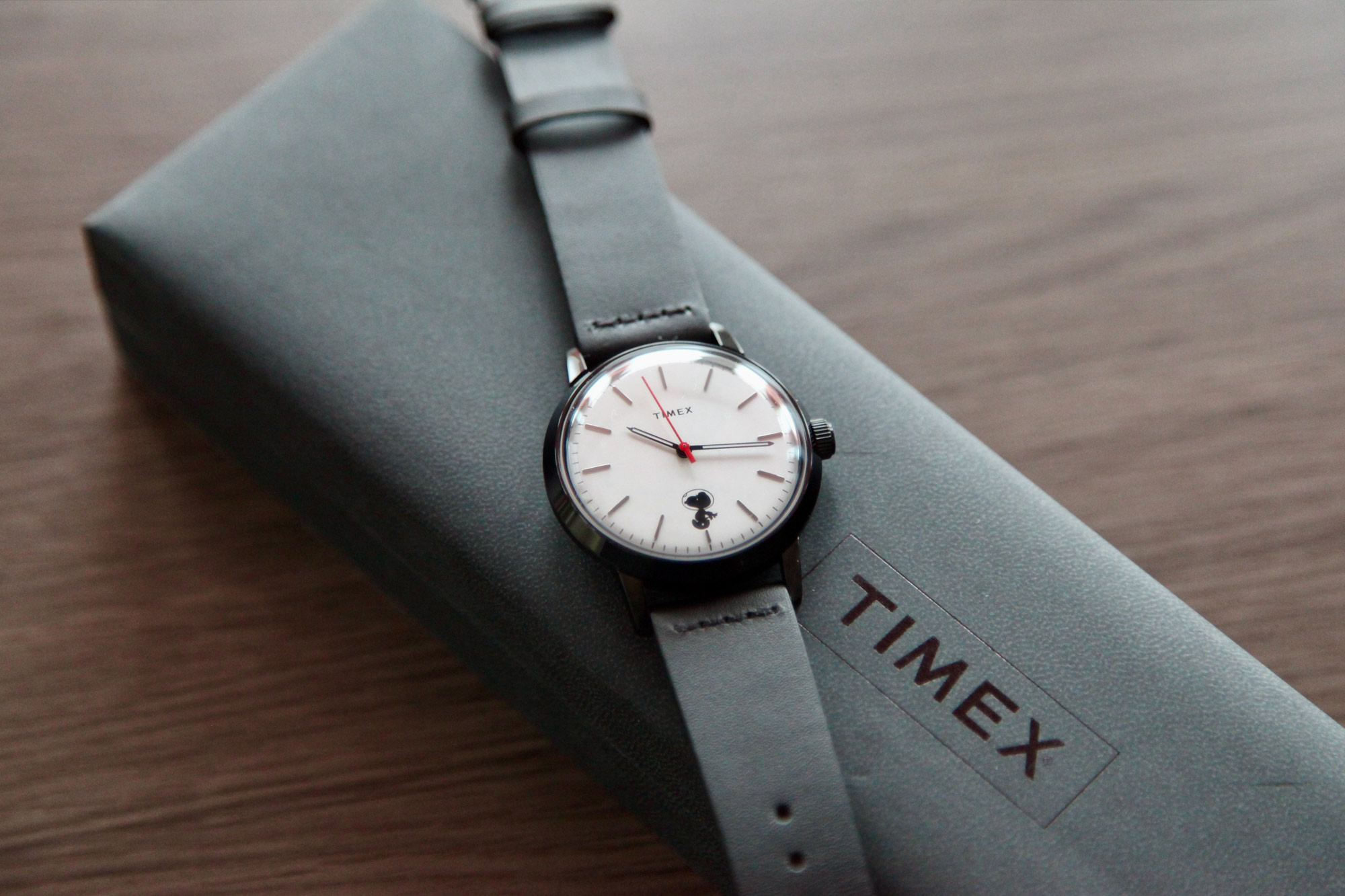 The Snoopy Space Traveler is Timex’ latest addition to commemorate the 50th anniversary of the lunar landing so they used their sixties Marlin model as a base for this Snoopy edition. Using a Japanese Miyota automatic movement the watch has a 40 hour power reserveRéserve de marche Also known as Power Reserve. A watch's power reserve refers to the amount of time a mechanical watch can run without being wound. The power reserve of a mechanical watch can vary depending on the size of the mainspring, the efficiency of the gear train, and the rate at which the mainspring releases energy. If a watch has a Power Reserve 'complication' it simply means that the status of the power reserve can be seen on the watch itself (either on the dial or movement side of the watch). [Learn More]. The case glossy black coated case in 40mm glossy black is rated water resistant for up to 50m and features a beautiful domed acrylic crystal adding warmth to the dial. It’s really fun to spot the space helmet equipped Snoopy silhouette on the dial peeping from the side of the watch. 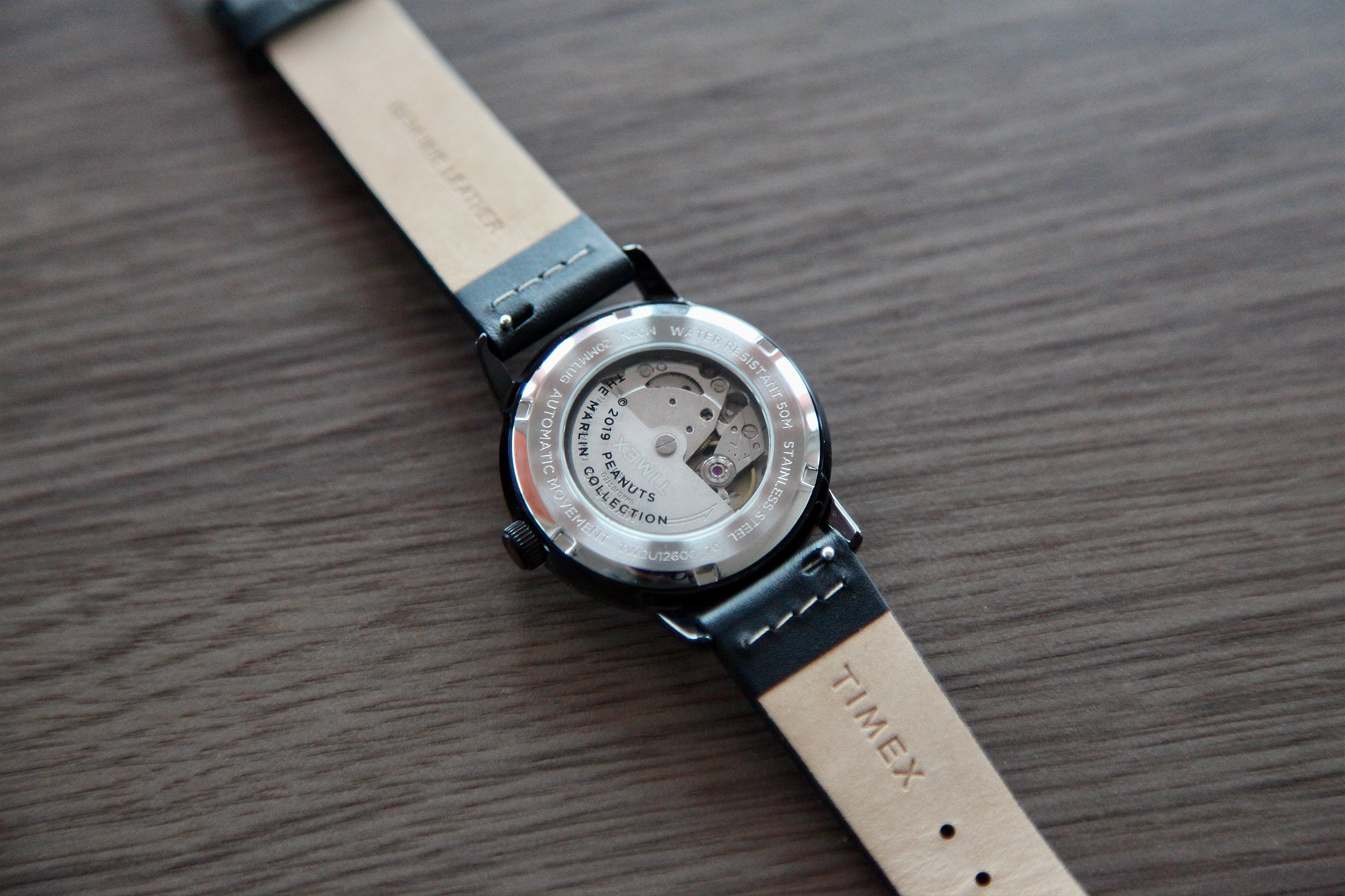 The watch comes on a black leather strap, including quick release functionality enhancing possibilities to equip those 20mm lugs with any of the 20mm Degriff straps you may already have in your possession. Which you may tempted to do quickly as the original leather strap, fitted with a black Timex engraved buckle, feels more like made out of carton. 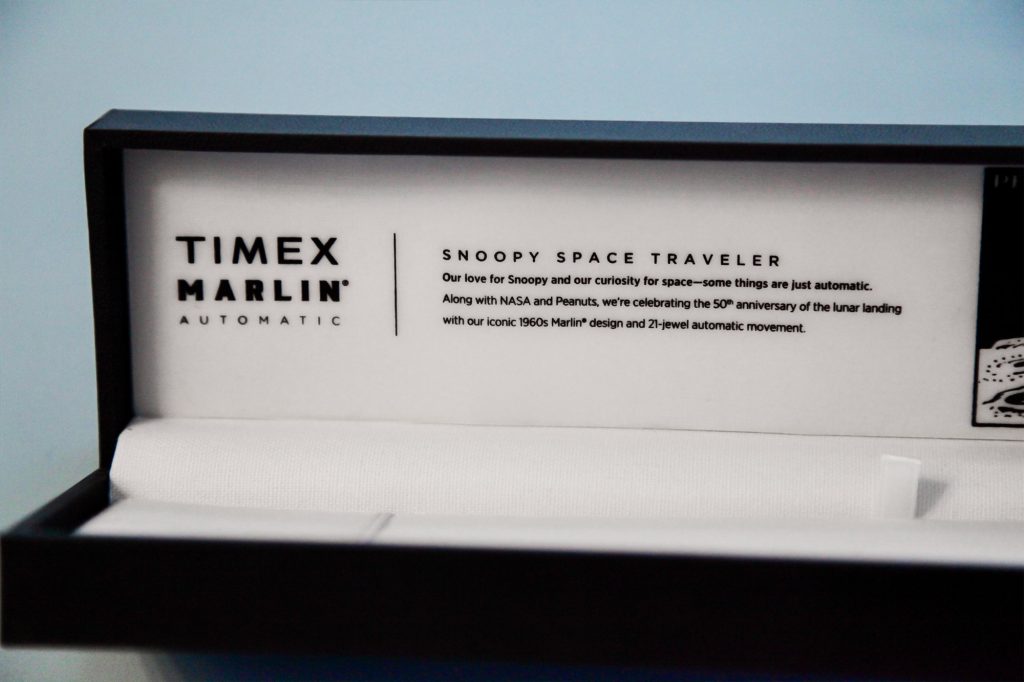 On the American site Timex offers an optional leather strap in black or brown and even a steel bracelet for respectively $25 and $45. On the European Timex site there’s no such offering unfortunately. That quick release steel bracelet for $45 sounds like a steal… 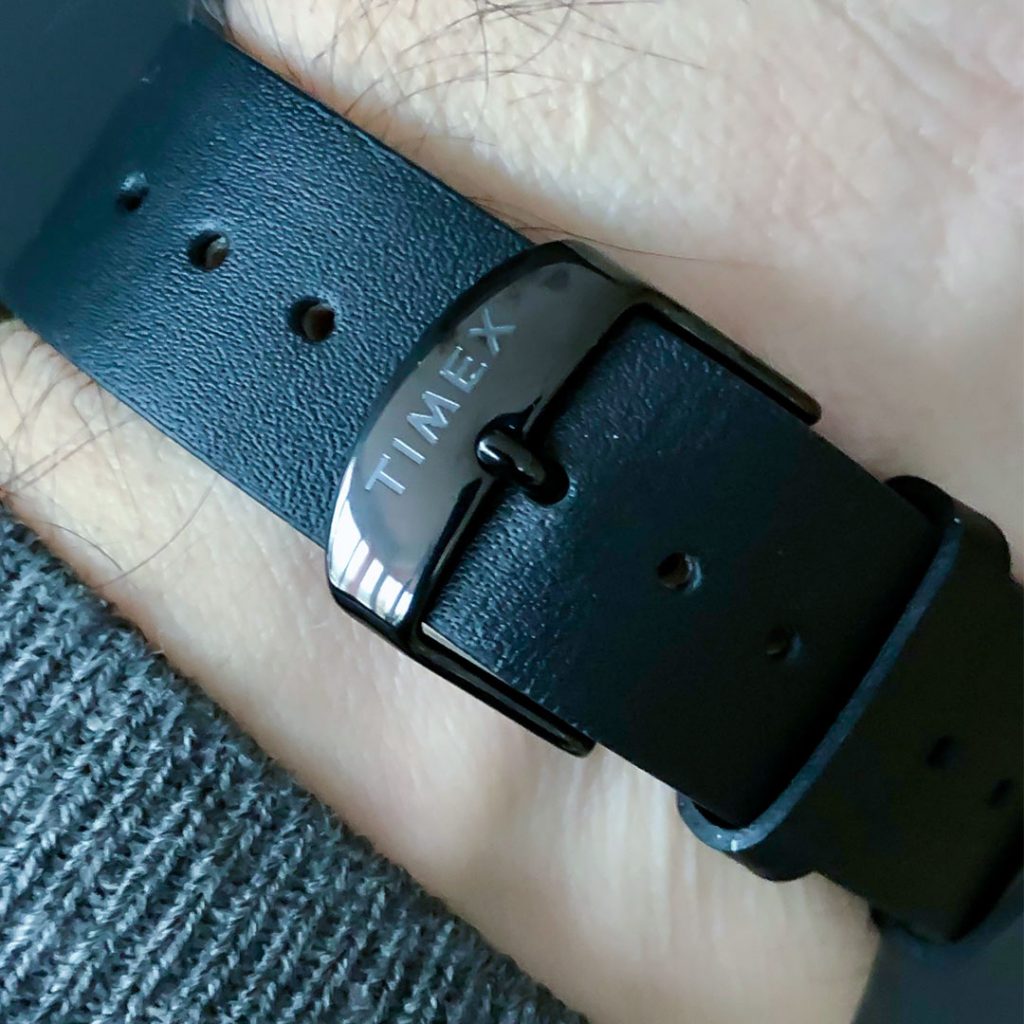 The watch itself is offered for $249 / €249. Currently sold out in the US but probably next production batch will arrive soon. 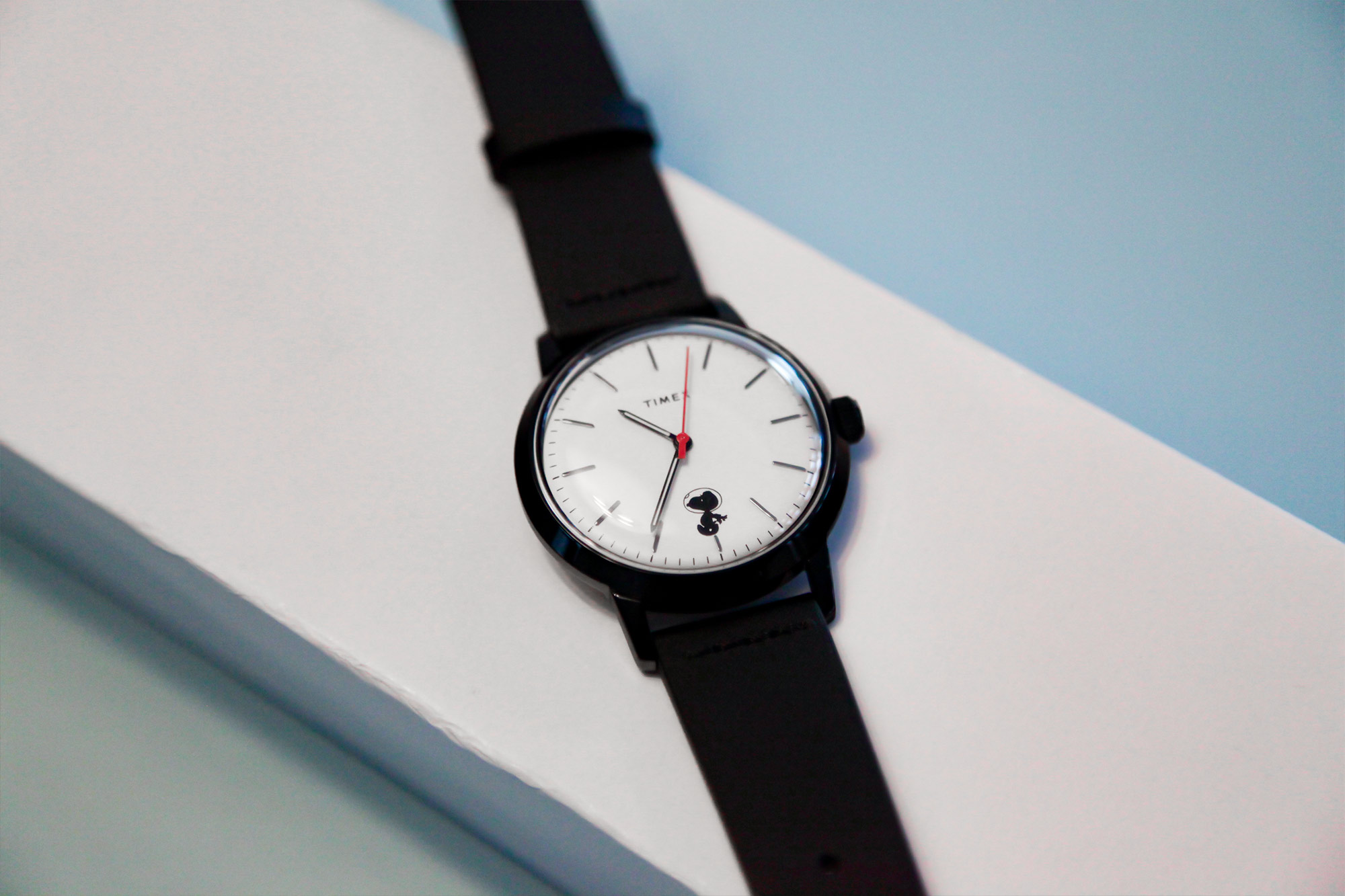 Not a high end watch but certainly a high fun and conversation piece. The smile on your face when looking at it comes for free. Timex already said it in 1956: “it takes a licking and keeps on ticking”!