How time flies, its’ hard to believe we are already in February of 2020, and it has been a full year since I picked up the IWC Big Pilot Le Petite Prince! And with that, I will provide my long term review of this watch as it has dominated my rotation for most of 2019 due to the lovely dial and also the 7 day power reserveRéserve de marche Also known as Power Reserve. A watch's power reserve refers to the amount of time a mechanical watch can run without being wound. The power reserve of a mechanical watch can vary depending on the size of the mainspring, the efficiency of the gear train, and the rate at which the mainspring releases energy. If a watch has a Power Reserve 'complication' it simply means that the status of the power reserve can be seen on the watch itself (either on the dial or movement side of the watch). [Learn More] which allows it to go almost a full week before I go back to it! Let’s jump right in shall we? 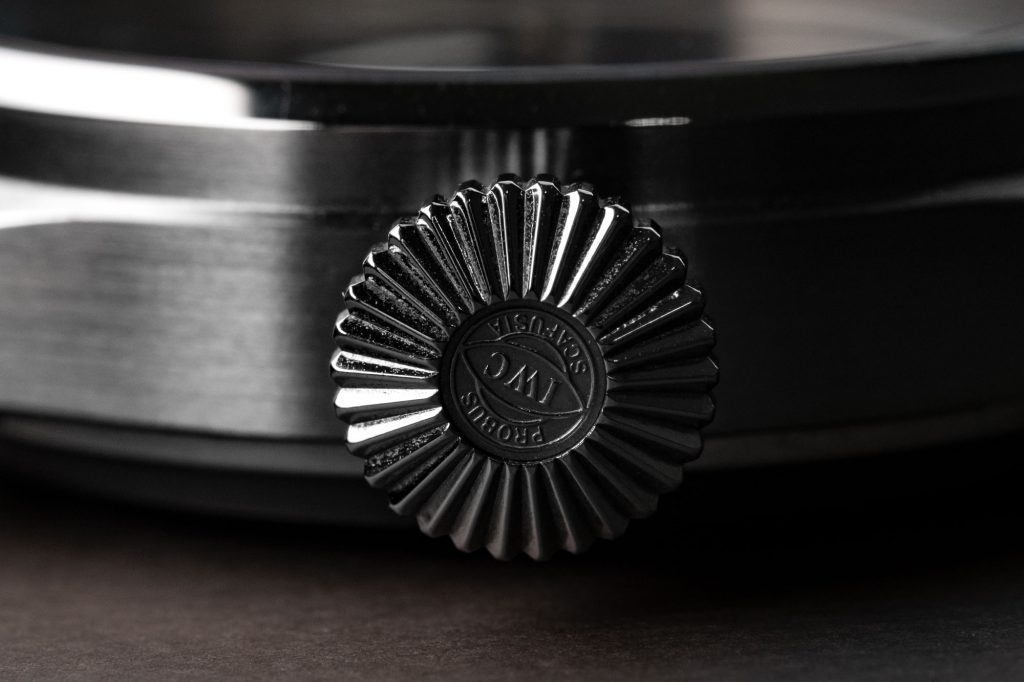 Although Cartier claims to have the first pilot watch with it’s Santos DuMont, it was a watch designed for one person who flew as an enthusiast. IWC, along with A Lange & Sohne, Laco, Stowa, and Wempe were the ones that produced the pilots watch for the Luffwaffe in the mid 1930s.

This was the first standardization of the pilot’s watch with the large 55mm case diameter to be worn outside the flight jackets and have a large legible dial for pilots to see in the cockpit. This is where the Big Pilot line drew its inspiration and heritage from when it was introduced in 2002.

There is no escaping the big elephant in the room, this is one big watch, there is no hiding the fact it has a 46.2mm case diameter and 15.5mm thickness. It does hug my 16.5cm wrist just fine, although the lug to lug is pushing the limits. It actually wears rather well and the big cone crownCrown The knob on the outside of the watch that you typically use to either wind the mainspring or set the time [Learn More] does not bump into my hand due to the height of the watch. 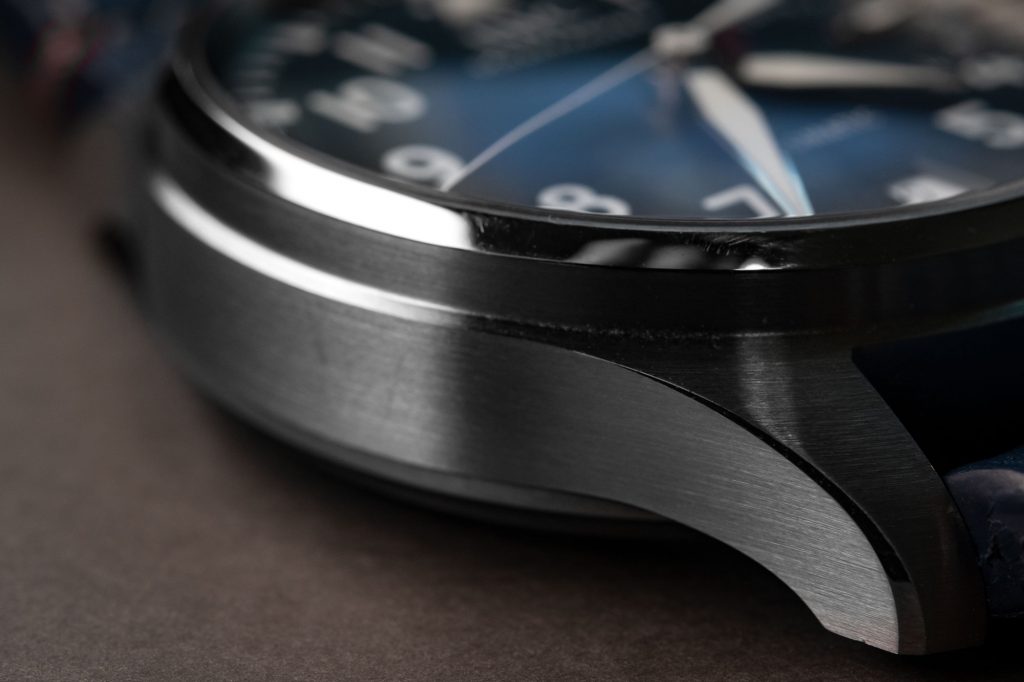 Upon a closer look at the case, you can see the bezel is actually mirror polished contrasting the rest of the case which is brushed. In addition, the lugs are beveled with the similar mirror polishing as well, a very nice touch from IWC to showcase attention to detail. 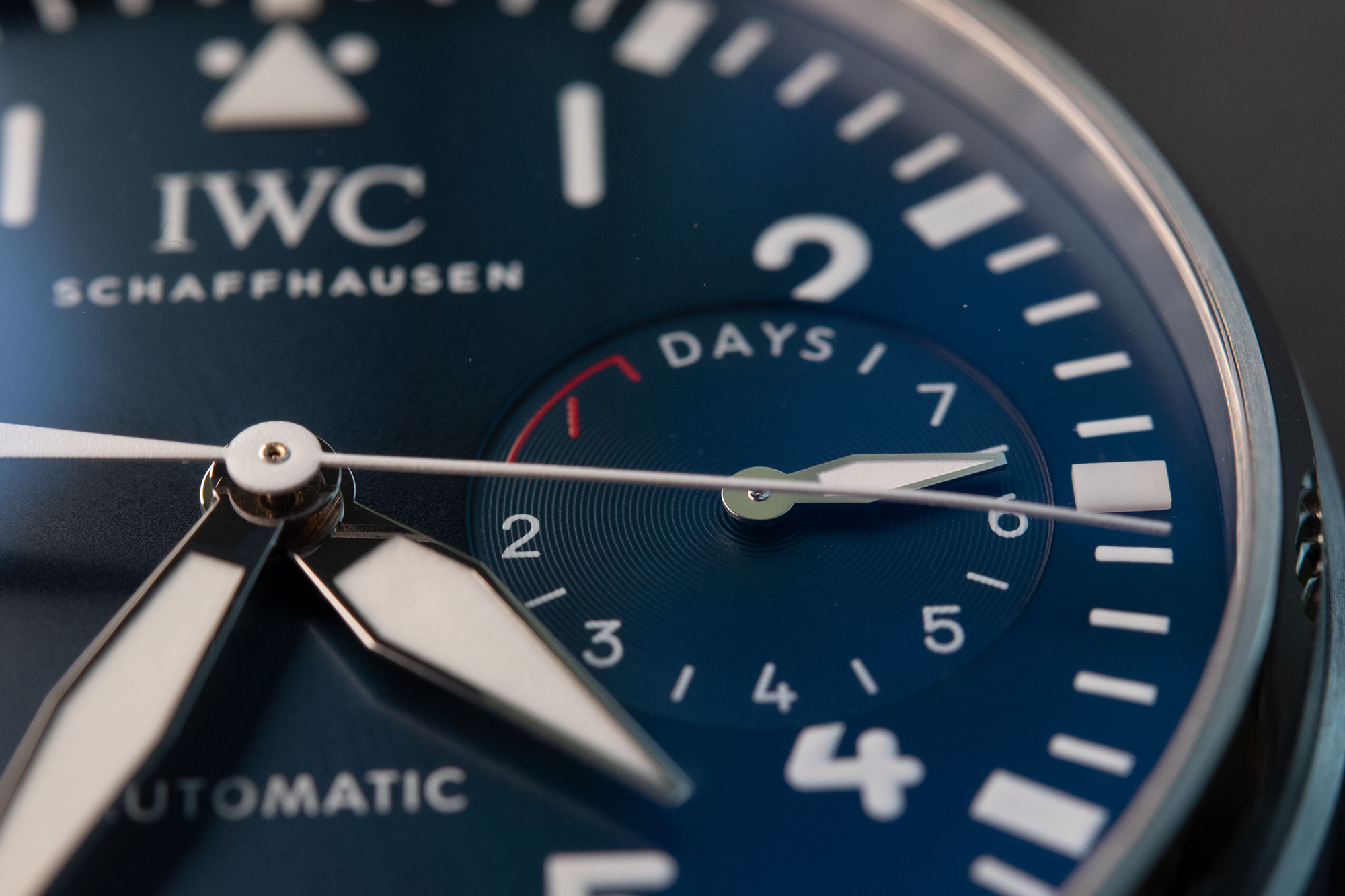 Moving on to the dial side is what drew me to purchase this watch. The dial when under bright light, is a shiny sunburst blue, but in darker lighting, it can look like it is black, and in other angles, a dark navy blue. The dynamic blue dial is very fun to play with and dangerous as I find myself looking at my watch while in traffic many times.

At the 3 o’clock position, we have the circular cut out sub dial of the 7 day power reserve display, the watch actually has more power than 7 days but becomes inaccurate so IWC set it to stop running once it reaches the 7th day. 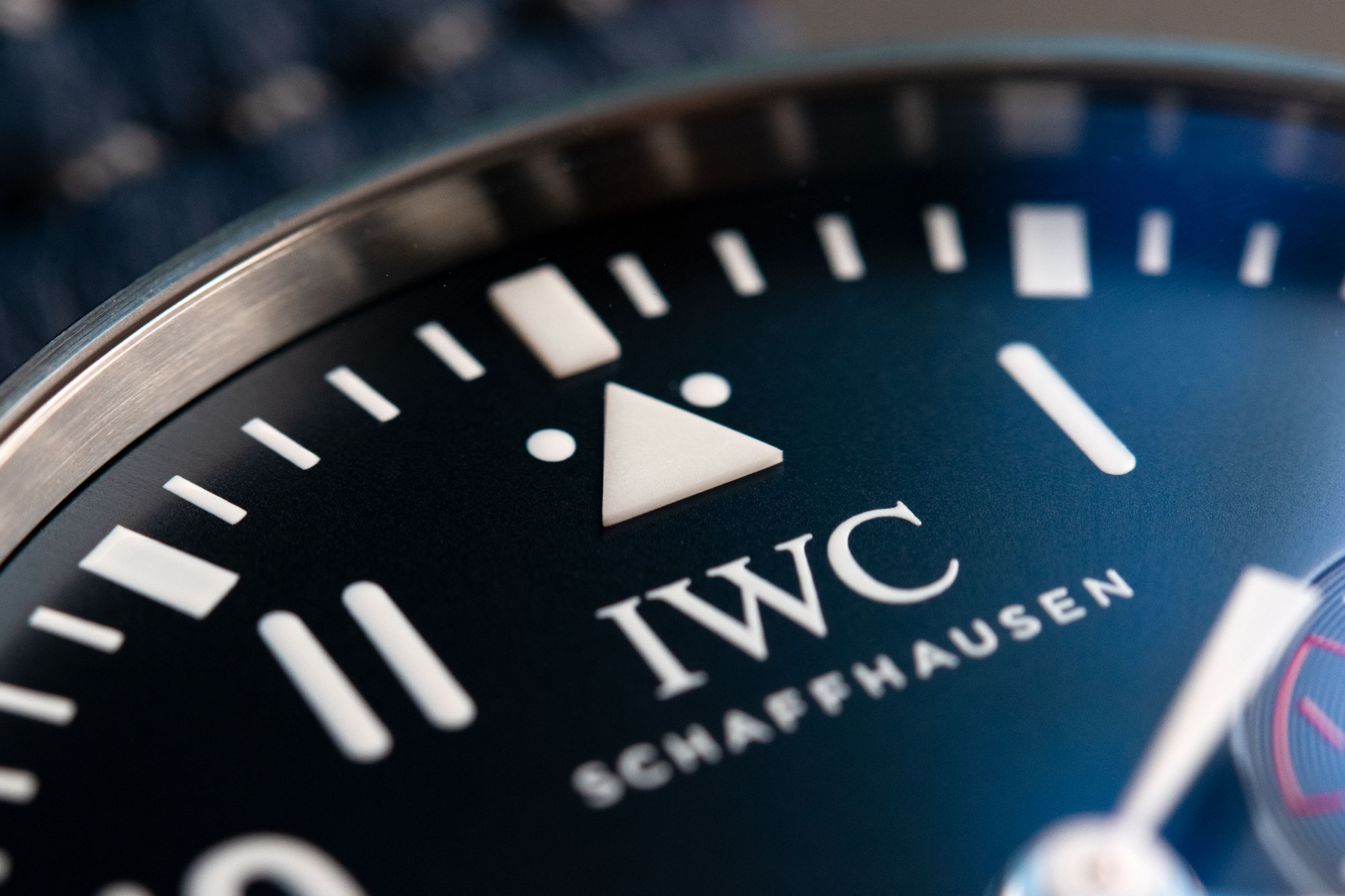 From a purist’s point of view, I would prefer this watch to not have a date, however, the date at 6 limits the disruption to the dial symmetry. And staying true to the original flieger specifications, instead of the number 12 at the 12 o’clock position, we have a big triangle with two dots next to it for easy reading at low light so you can easily tell the time.

Carrying over from the Mark series from the 1950s, the watch has luminescence at the 12,3,6, and 9 o’clock positions as well as the hour and minute hands too. In the dark, this gives a crosshair look, which is pretty cool. However, I do feel that IWC should’ve added luminescence to all the numbers and maybe add it to the indexes at 3,6,9, and triangle to provide the crosshair effect? 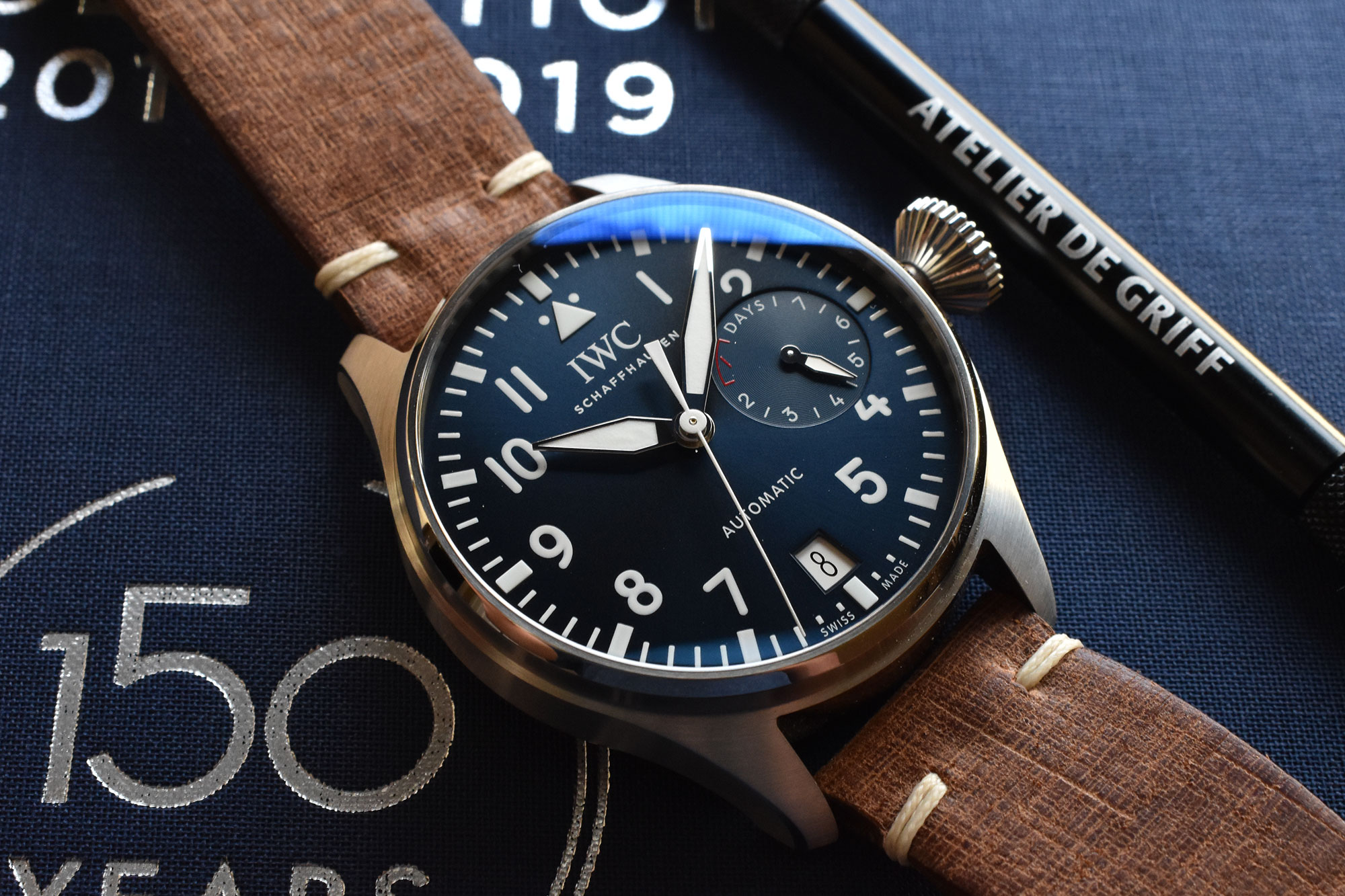 Before I purchased the watch, I noticed the movement number was changed on the IWC website and later on I found out IWC quietly added an extra barrelBarrel The barrel is a cylindrical container that holds the mainspring. The barrel is connected to the winding mechanism. The winding mechanism rotates the barrel, which in turn winds the mainspring. [Learn More] to the movement to assist with the accuracy for the watch, in addition to keeping it running on an impressive 7 days of power. Winding action of the 52110 is very smooth and crisp, the loud clicks reminds me of manual wind watches.

The 52110 is protected by a Faraday cage from magnetism, which explains the thickness of the watch as the same movement is used in the IWC Portugieser IW5007 but that watch is only 14.1mm tall, although there is an extra 30M of water resistance on the Big Pilot, it’s hard to argue this explains the 1.4mm extra thickness, especially these days with Omega and their co-axialCo-Axial Escapement The co-axial escapement is a type of escapement mechanism invented by George Daniels, a British watchmaker, in the 1970s, and is characterized by the use of a co-axial wheel, which is a three-level wheel that replaces the traditional pallets used in other escapements. It uses a unique design that allows the gears to run with less friction, which means that it requires less maintenance and will have a longer lifespan than traditional escapements. Additionally, it is said to be more precise than traditional escapements, this is mainly because of the decreased friction which allows the balance wheel to oscillate more consistently. [Learn More] anti-magnetic movements, the Faraday cage feels a bit outdated.

According to my research, the new 52110 movement is to have a variance of 0 to +7 seconds a day. My specific watch has ran at +10s a day consistently even when I change the resting position. Although this is acceptable, I do wish IWC can regulated a bit tighter given the price point of the watch. 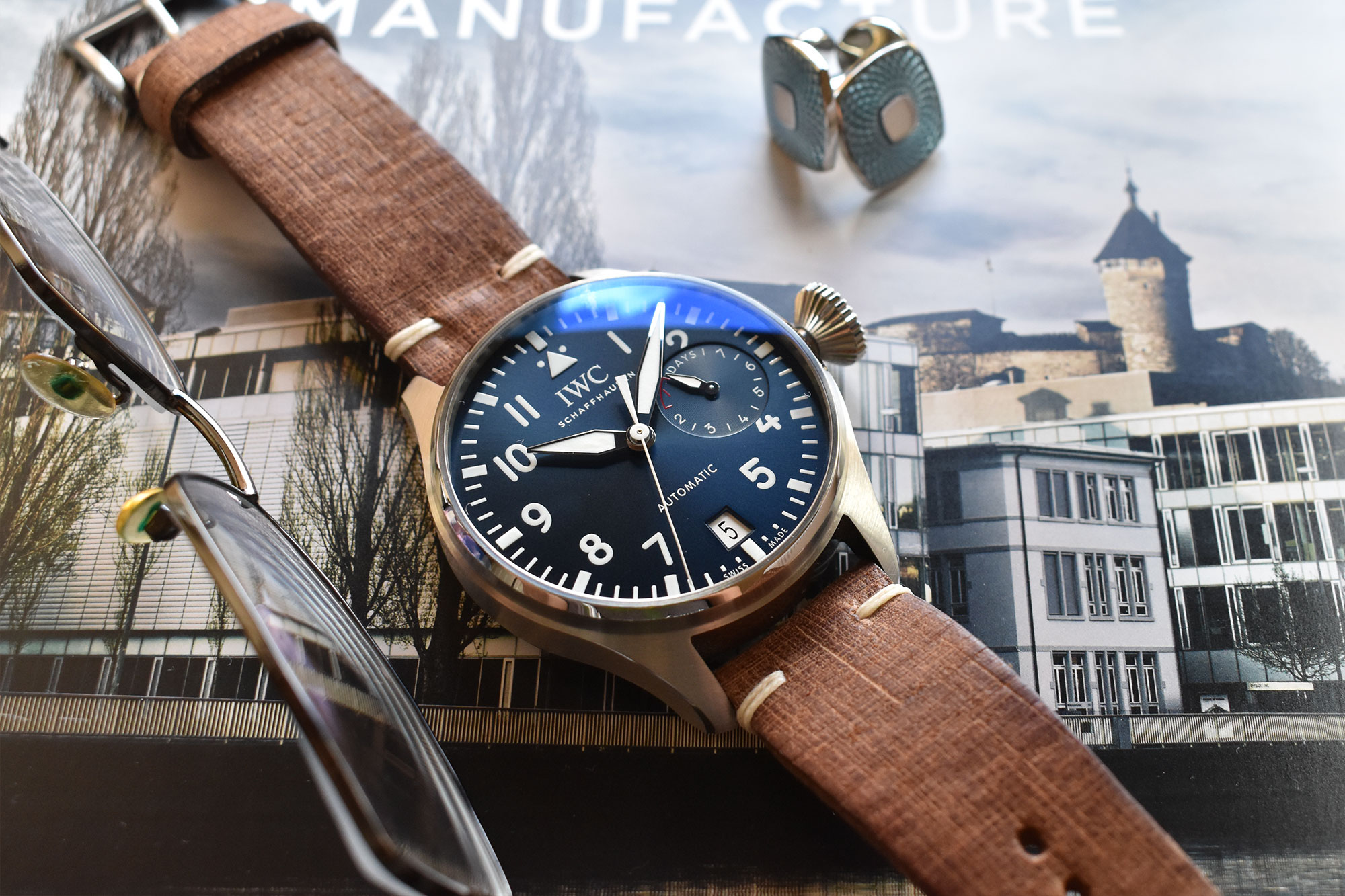 Despite the large case size, the watch wears well on my 16.5cm wrist and there is no denying that it is meant to be noticed given the size. I do wish the watch is smaller, but then it would be self defeating. The blue dial is mesmerizing and I think that’s what has consistently brought me back to it over and over.

The watch came with a nice brown Santoni strap with IWC deployant clasp, which I feel brings out the blue dial very well. However, the strap is just a few centimeters too long, so it looks a bit off on the wrist but I don’t believe IWC sells another size for the Big Pilot line.

Overall, I believe this is a keeper as I find myself picking this up out of the line up consistently. Perhaps this can be explained to my affinity to pilot watches, but only time will tell whether this is the case!