Today we have the pleasure to review the Seiko Alpinist SPB155j1. The Alpinist is available with a textured green dial, a cool grey dial and then also a gorgeous blue dial. For a detailed look at the Seiko Alpinist, click below for the full video review: 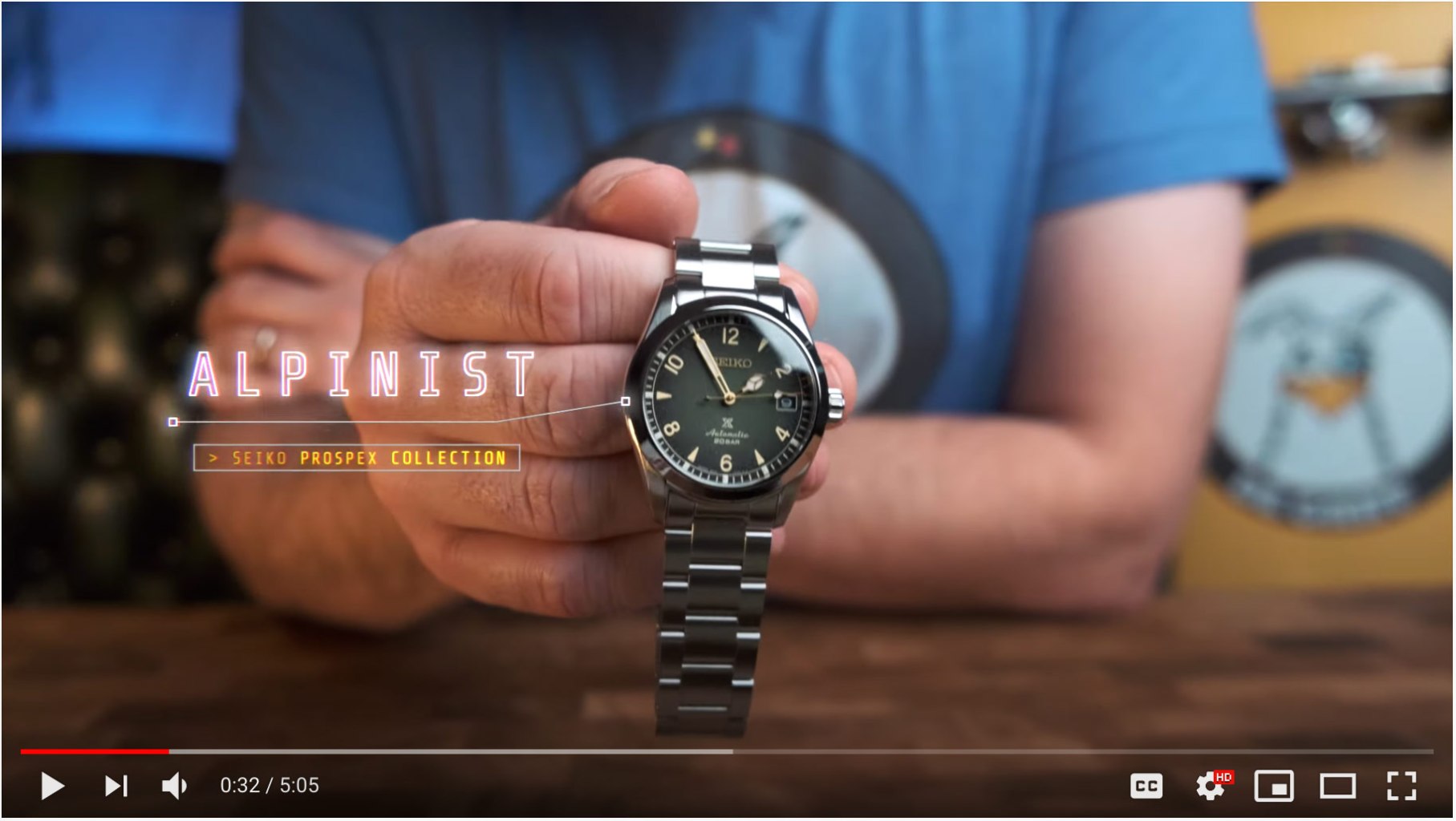 Beating inside and visible through the display case-back is the still relatively new automatic caliberCaliber The caliber ('movement') is the heart and engine of a watch. It consists of a number of interconnected components that work together. Energy is transmitted through the gear train, to the escapement mechanism. The escapement mechanism releases this energy in a controlled manner. This drives the gear train, which ultimately rotates the hands of the watch and keeps time. [More Info] 6R35. Essentially the updated 6R15. A low beat movement, hopping along at a relaxed 3hz. It displays hours minutes, running seconds and also has a date complication. Like its predecessor it has a rated accuracy of +25 to -15 sec per day. Seiko has applied some magic to the main springMainspring The mainspring is a spiral-shaped metal spring that stores energy in a mechanical watch movement. It is located inside the barrel. The mainspring is wound, either manually or automatically. The mainspring unwinds over time, and the watch will stop running when the mainspring is fully unwound. [Learn More],  giving you an increased and very handy power reserveRéserve de marche Also known as Power Reserve. A watch's power reserve refers to the amount of time a mechanical watch can run without being wound. The power reserve of a mechanical watch can vary depending on the size of the mainspring, the efficiency of the gear train, and the rate at which the mainspring releases energy. If a watch has a Power Reserve 'complication' it simply means that the status of the power reserve can be seen on the watch itself (either on the dial or movement side of the watch). [Learn More] of approximately  70 hours.

The 38mm case is stainless steel and the crystal is sapphire with an AR coating on the inside.  The watch also features a screw down crownCrown The knob on the outside of the watch that you typically use to either wind the mainspring or set the time [Learn More] and a screw case-back resulting in a watch that boasts a 20 bar water resistance. 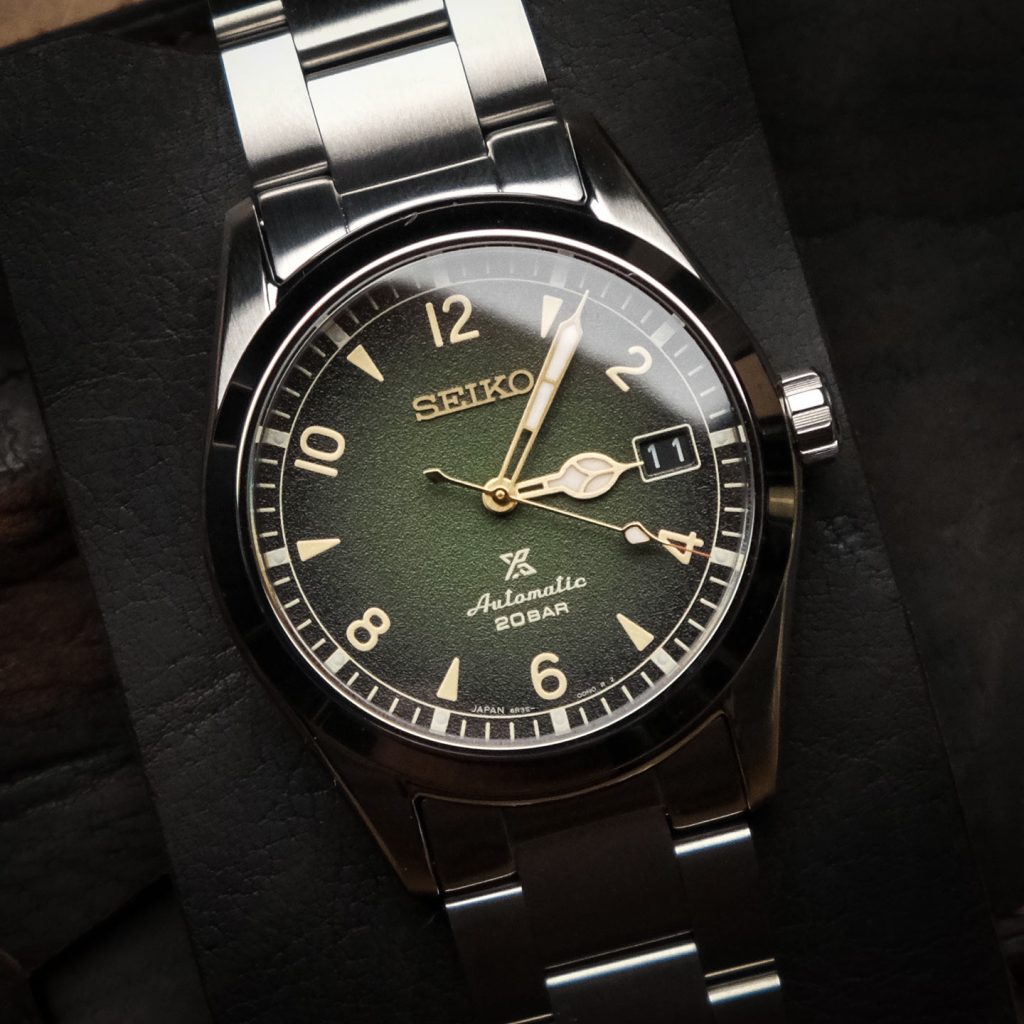 This is an alpinist, but this version with its 38mm case lacks some of the typical points that some of you might have come to associate with the Alpinist range. There is no internal compass bezel, no additional crown at 4 o-clock and indeed the case has been slimmed down considerably here as well. Its sleeker appearance has earned it the nickname ‘Baby Alpinist’.

The one clear indication that we’re talking about the Alpinist are those instantly recognisable cathedral hands and the arabic numerals. 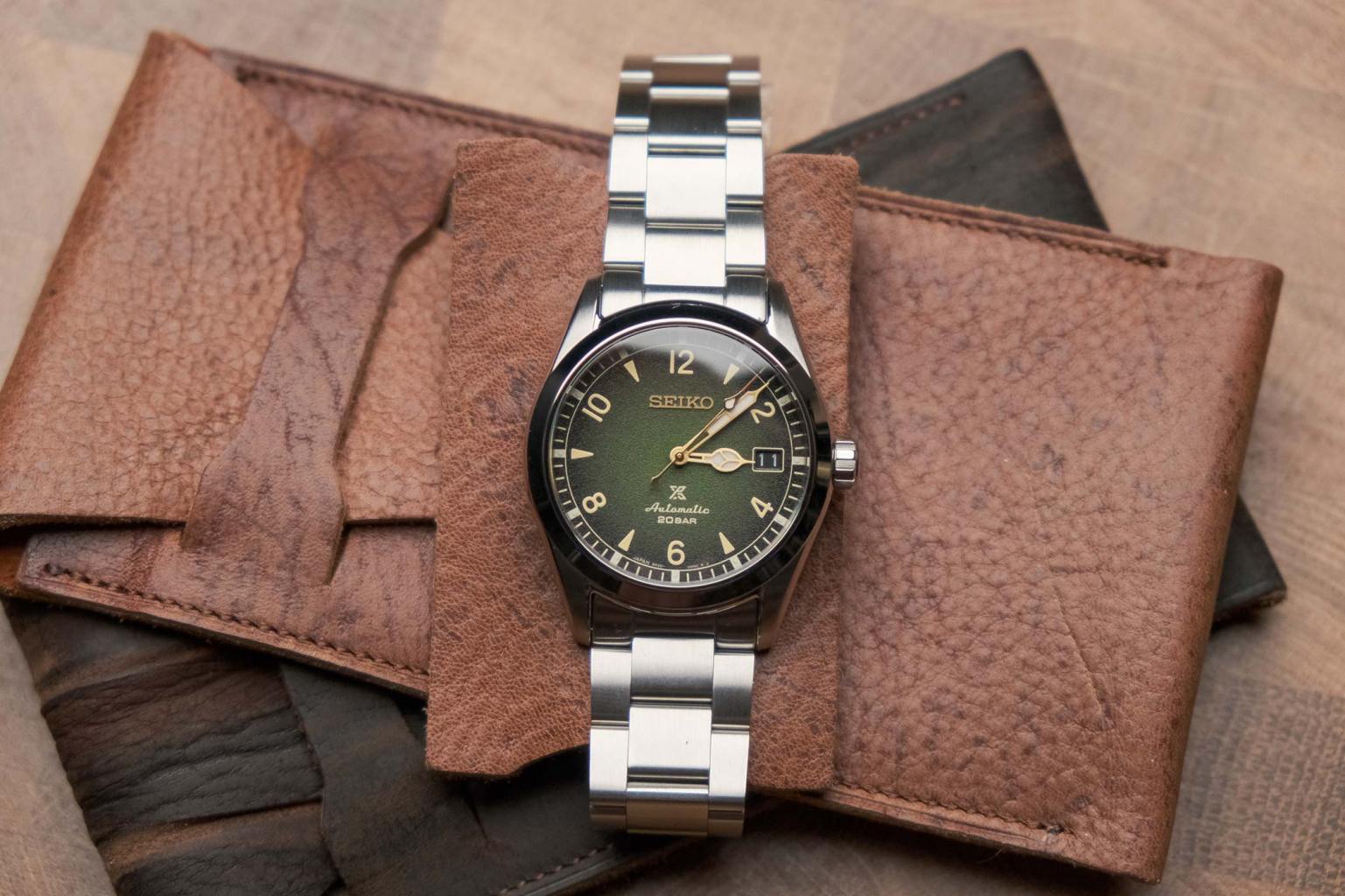 The case sits at that perfect 38mm and with a lug to lug of 46mm- pretty much anyone can wear this watch . The case offers a mix of brushed and polished surfaces, keeping a certain utilitarian look to it. I really like how this particular version looks on the bracelet. A stainless steel bracelet with a  brushed 3-link construction. The clasp is very nice and quite a few steps above the clasps you would find on for example the Seiko 5 range. The clasp is kept nice and compact and results in a sleek look. It is easy to operate and feels very solid. 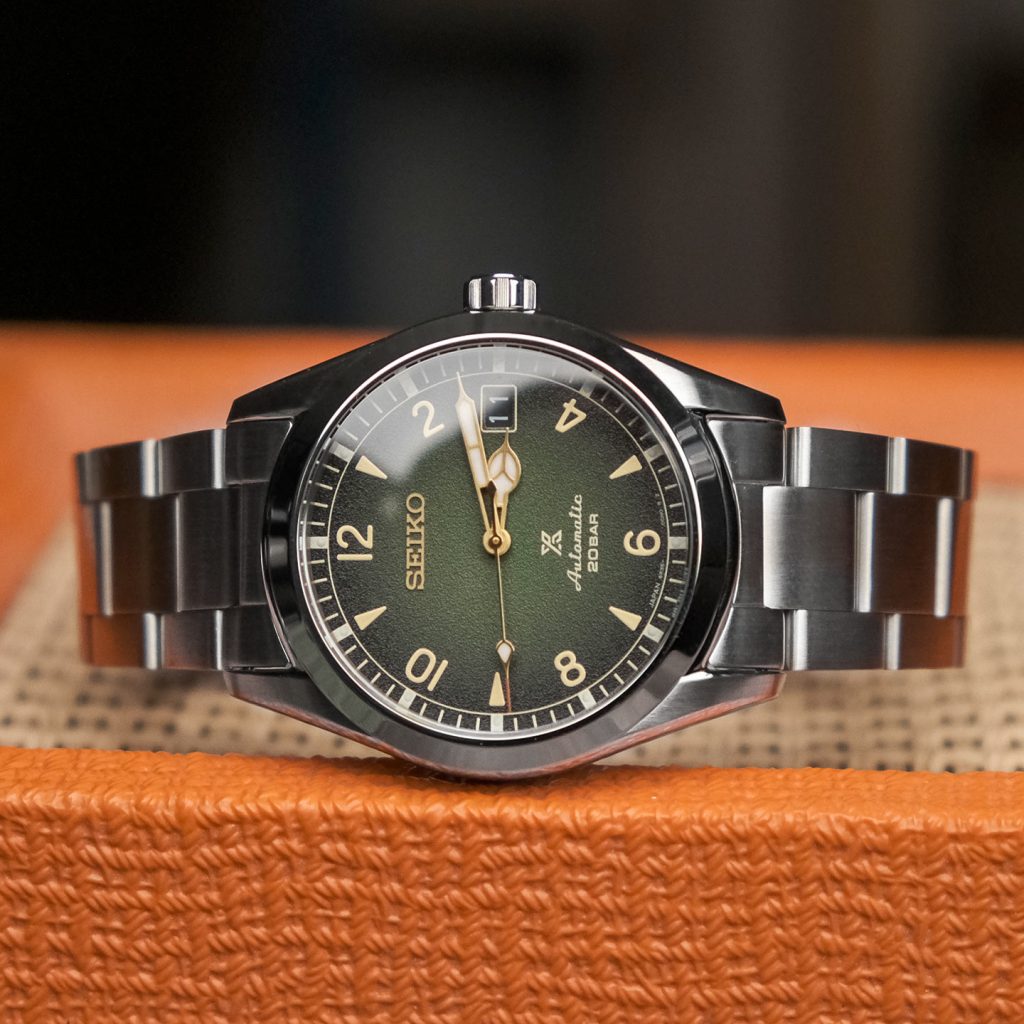 On my 6.5’’ wrist the watch sits like a dream. I’ve said this before but 38mm really is the sweet spot for me and many others. The overall proportions of the watch including its sloping lug design make for an excellent wrist experience.

Thanks to the dimensions and the versatile design on display, this makes the cut for a potential one watch collection and certainly meets my criteria for a go anywhere do anything (‘GADA’) wristwatch. If you want the most versatility, perhaps opt for the grey dial pictured below. Having more than enough dark dials in the collection, I have a slight preference for the green and the blue. 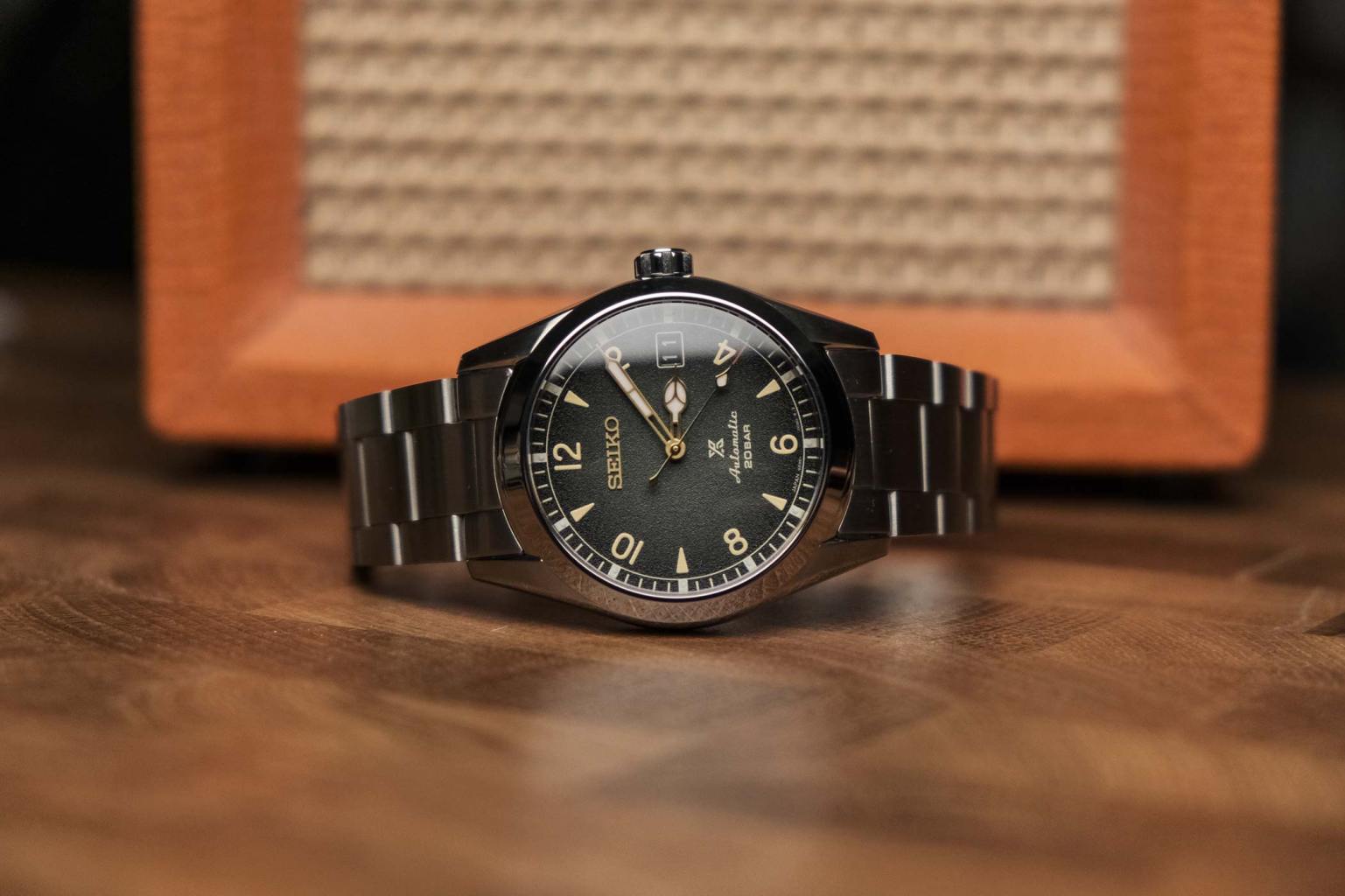 These look great on straps, but really come together on their bracelet.  Of course, having the option to wear on both a bracelet and a strap makes for an even more versatile watch.