For the German watch show Inhorgenta in Munich, German watchmaker Sinn released two new watches at the event. The black dialed 158 bi compax chronographChronograph A chronograph complication is a feature in a watch that allows the wearer to measure elapsed time in addition to telling the time. It works by having a separate set of gears and levers, called the chronograph mechanism, which is activated by pressing a button or a pusher. The chronograph mechanism starts and stops the chronograph's second hand, which is usually located on the watch's dial, separate from the regular watch hands. The elapsed time is usually displayed on a sub-dial or a register on the watch's dial. [Learn More] and the 104 pilot’s watch in a sunburst blue with matching blue bezel

The 158 is interesting because it is a tribute to the Bundesehr 1550 SG flybackFlyback A flyback function on a chronograph watch, allows the user to reset the chronograph back to zero and start timing again with a single button press (no need to first stop the watch). [Learn More] chronograph produced by Heuer in the 1960s and 1970s. In the 1980s, Sinn was contracted to refurbish these watches and as a result, some excess watches were released to the civilian market under the Sinn brand.

While the 158 is a modern interpretation, the case size remains the same at 43mm, which is on the larger side in the 1960s but is more common now. To create great legibility, as this is a pilot’s watch, the dial is matte black with contrasting white numerals filled with super luminova as well as the white minute and hour hands.

The sub seconds counter is at 9 with the white painted seconds hand while the chronograph minute counter is at 3 o’clock with the distinctive red hand. The chronograph hand is also painted red, to offer a nice contrast and provides the strong military vibe the watch invokes. 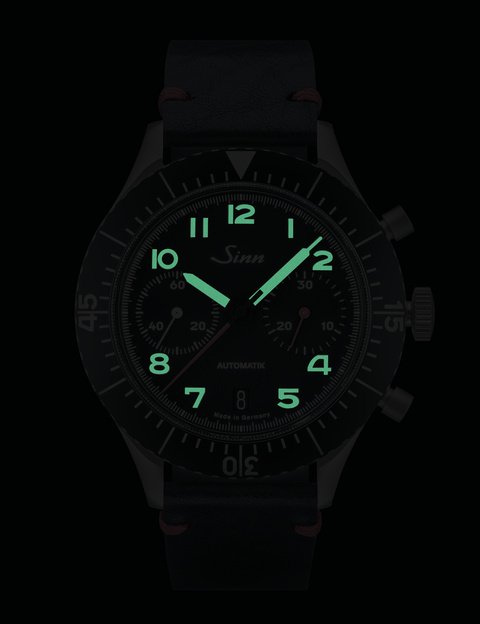 Beating inside is the trustworthy SW510, which is based on the Valjoux 7750 but modified to move the chronograph minute counter to the 3 o’clock position instead 12 and the date at 6 o’clock. The watch has a thickness of 15.15mm, which is expected with the Valjoux movement. However, the watch is rated to 100 meters of water resistance. The bi-directional bezel is made of black coated aluminum and the case is bead blasted like the original 1550 SG. Keeping with the vintage features, the watch comes with a shock resistant acrylic crystal instead of a sapphire crystal. 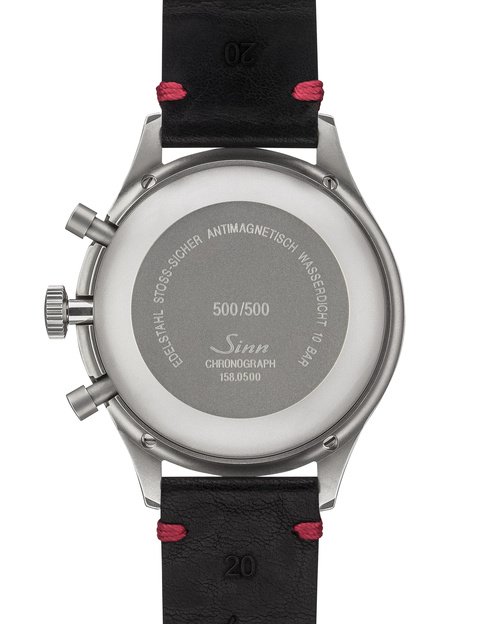 The watch will be available at Sinn retailers beginning in March with a total production of 500 pieces and a price of 2,590 Euros including VAT.