At last, we go hands-on with the Rolex GMTGMT A GMT (Greenwich Mean Time) complication is a feature found in some watches that allows the wearer to track two time zones simultaneously. It typically includes a 24-hour hand and a bezel or a second hour hand that can be adjusted independently of the main hour hand to track the time in a different time zone. [Learn More] Master II, more specifically the PEPSI GMT reference 126710BLRO. Click below for the full video hands-on: 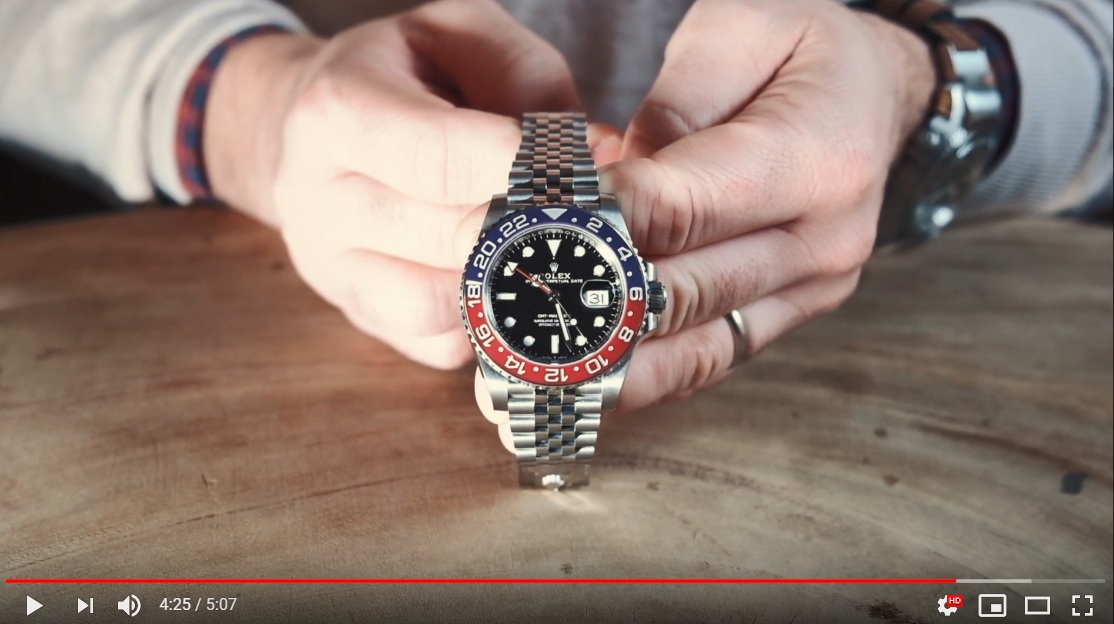 Let’s start with the obvious here – the bracelet. This is what made all the noise when this particular reference was revealed at Baselworld in 2018. 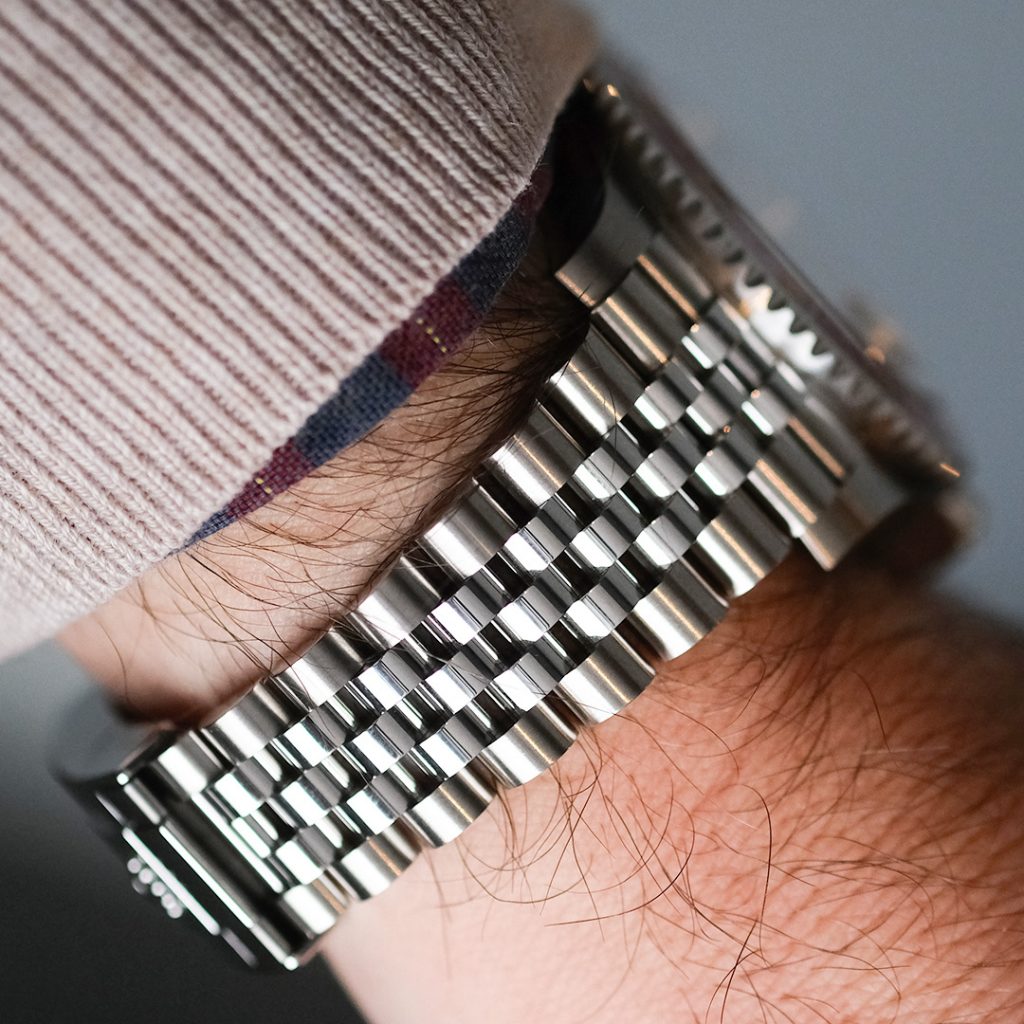 The bracelet is not just any bracelet, it is the jubilee bracelet to be precise. A five piece link metal bracelet, made from Oyster Steel. It is paired with the rock solid oyster clasp which features the Oysterlock and also a hidden 5 mm comfort extension link for a perfect fit throughout the day. The polished centre links add a little bit of shine to the overall design. The clasp and bracelet are of exceptional built quality. 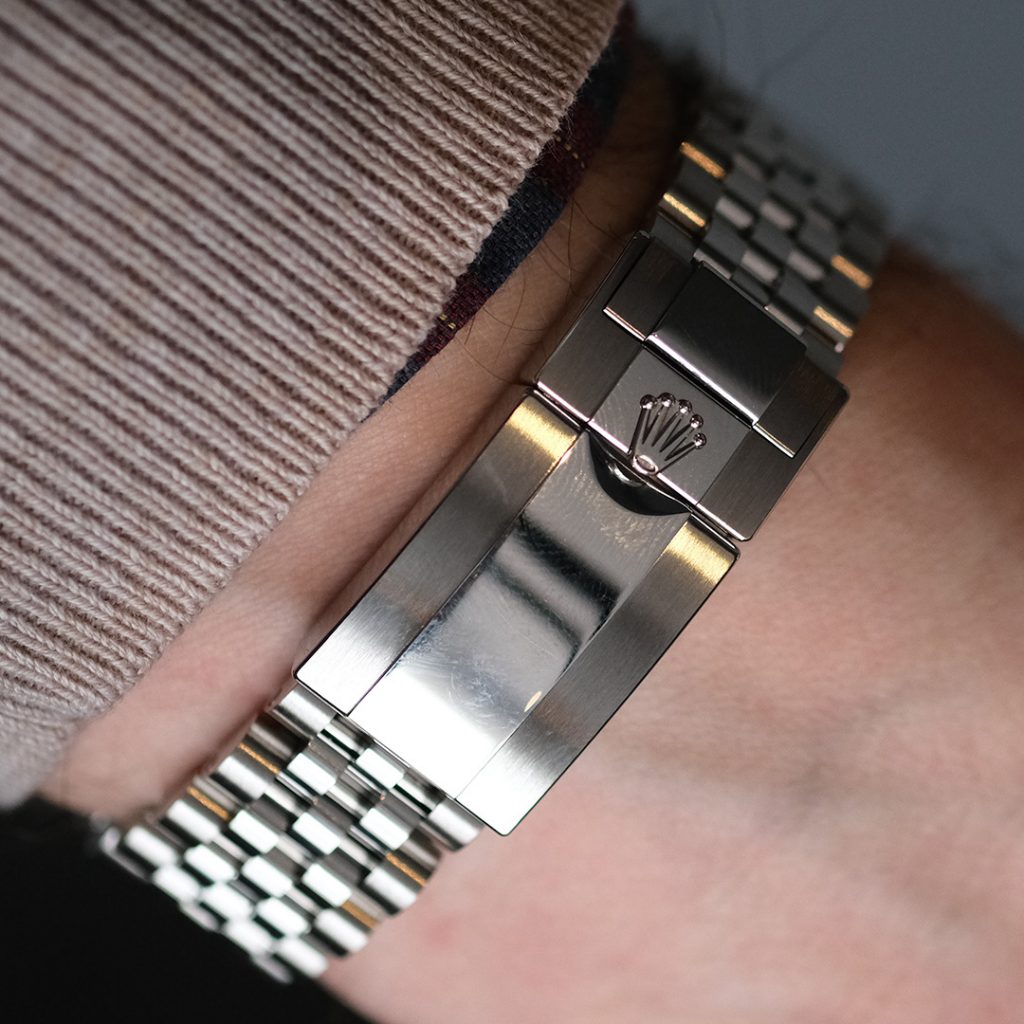 The next obvious feature of this watch would of course be the Pepsi bezel. It proudly features the two-colour red and blue Cerachrom insert in ceramic. Red and blue for day and night indication. Note that the bezel doesn’t just click for every hour in this latest version, it also allows you to click through at a half hour interval – very handy for certain time-zones.

If you look closely in the video, you can see the half hour clicks at around 1:25 minutes. The ceramic bezel is highly scratch resistant, and its unique colour remains unaffected by ultraviolet rays over time.  The bezel is diamond polished, adding quite a bit of luster to the overall watch.

Combine the glorious Jubilee bracelet with the colourful bezel, and there really is no flying under the radar with this watch. 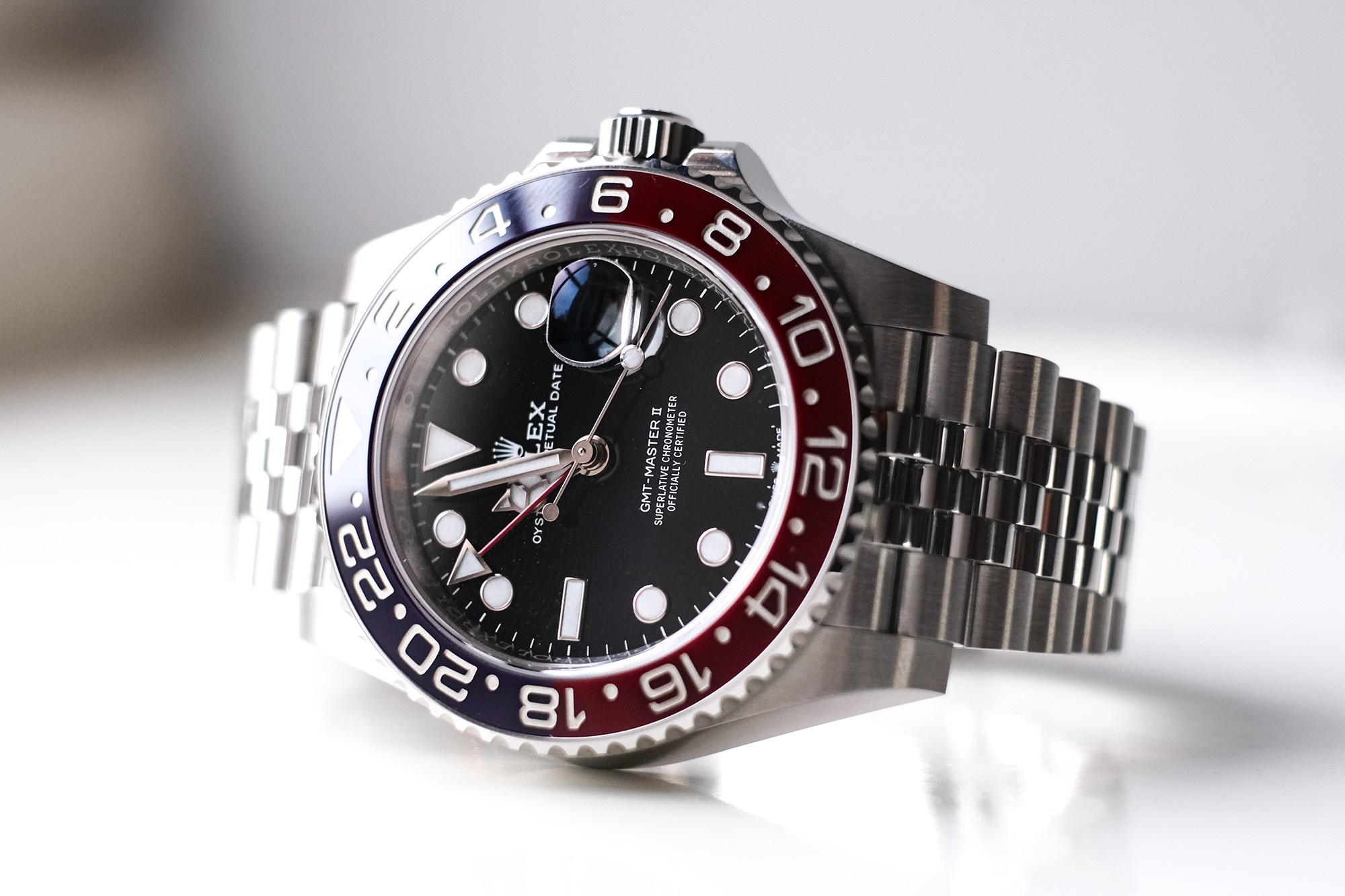 On the wrist, the weight and fit is, just perfect. Nobody does bracelets and overall balance like Rolex. The watch hugs your wrist, and a lot of that has to do with the bracelet. Rolex seems to have the magic formula which results in a bracelet that looks and feels like no other. I’ve said this before but these are the bracelets that set the standard for all other bracelets.

On the wrist this watch does not wear large, it has a contemporary 40mm diameter, and it wears just right. The weight of the case balances nicely with the weight of the bracelet. The watch also wears nice and flat. The sapphire crystal is entirely flat excluding the famous cyclops lens over the date window of course. As per usual, Rolex does not apply any anti-reflective coatings to its crystals. Rolex be Rolex. 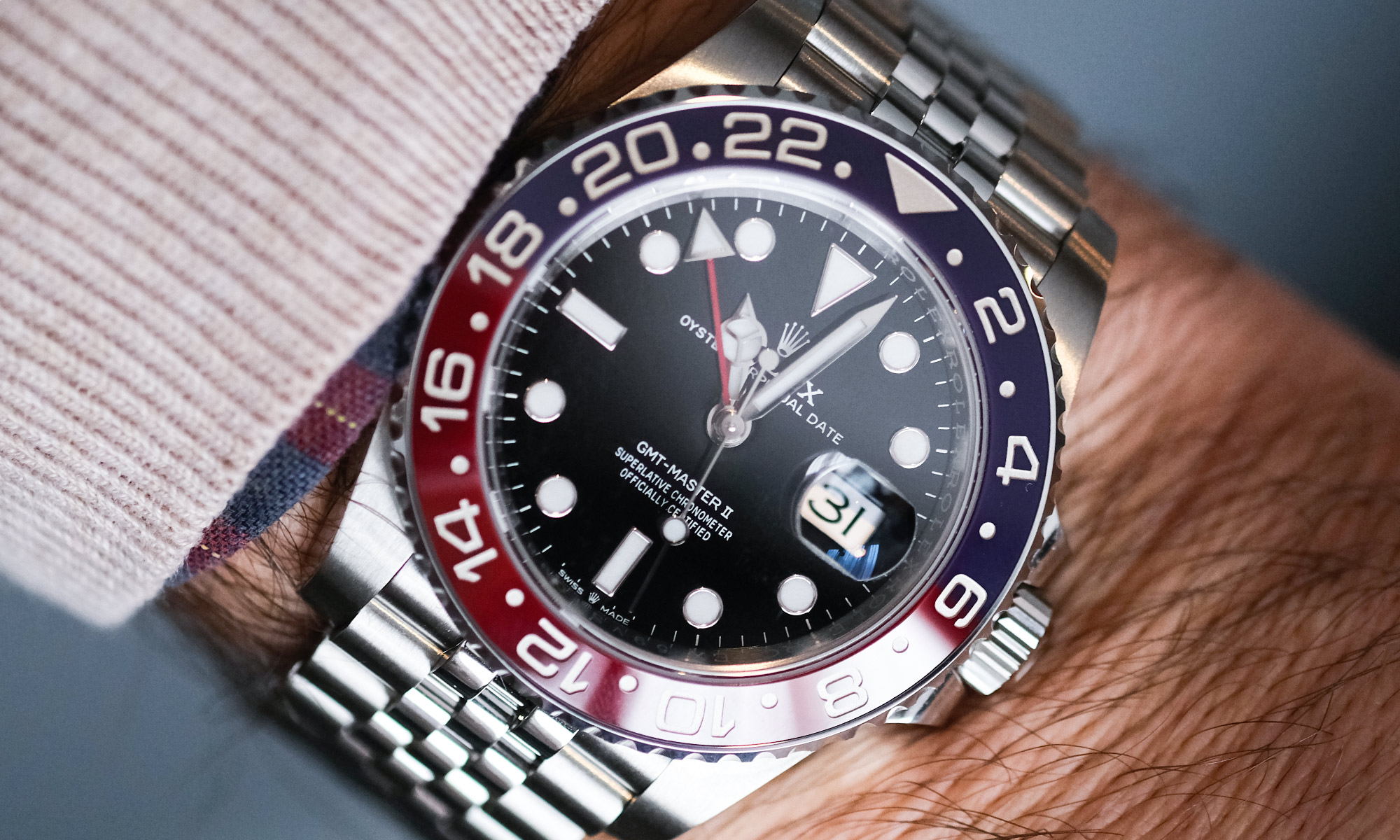 The finish on this watch, as on any modern Rolex watch , is of the highest standard. Try and find a fault, you simply won’t.

The Case follows the typical oystercase design ethos, a monobloc middle case with a screw-down (not see-through) case back and a screw down- winding crownCrown The knob on the outside of the watch that you typically use to either wind the mainspring or set the time [Learn More]. As a result this watch is not only suitable for the sky but also for the ocean as it is waterproof to 100 meters.

The case and bezel all fit perfectly, the case finishing with the polished and brushed surfaces and the nearly razor sharp edges are all extremely well executed. The case finishing with both brushed and polished surfaces increases the tool factor of this very luxurious tool watch. The bezel clicks and sounds just perfect, neither too loud, nor too soft and neither too harsh, nor to smooth. Everything is about as crisp and clean as it can get. 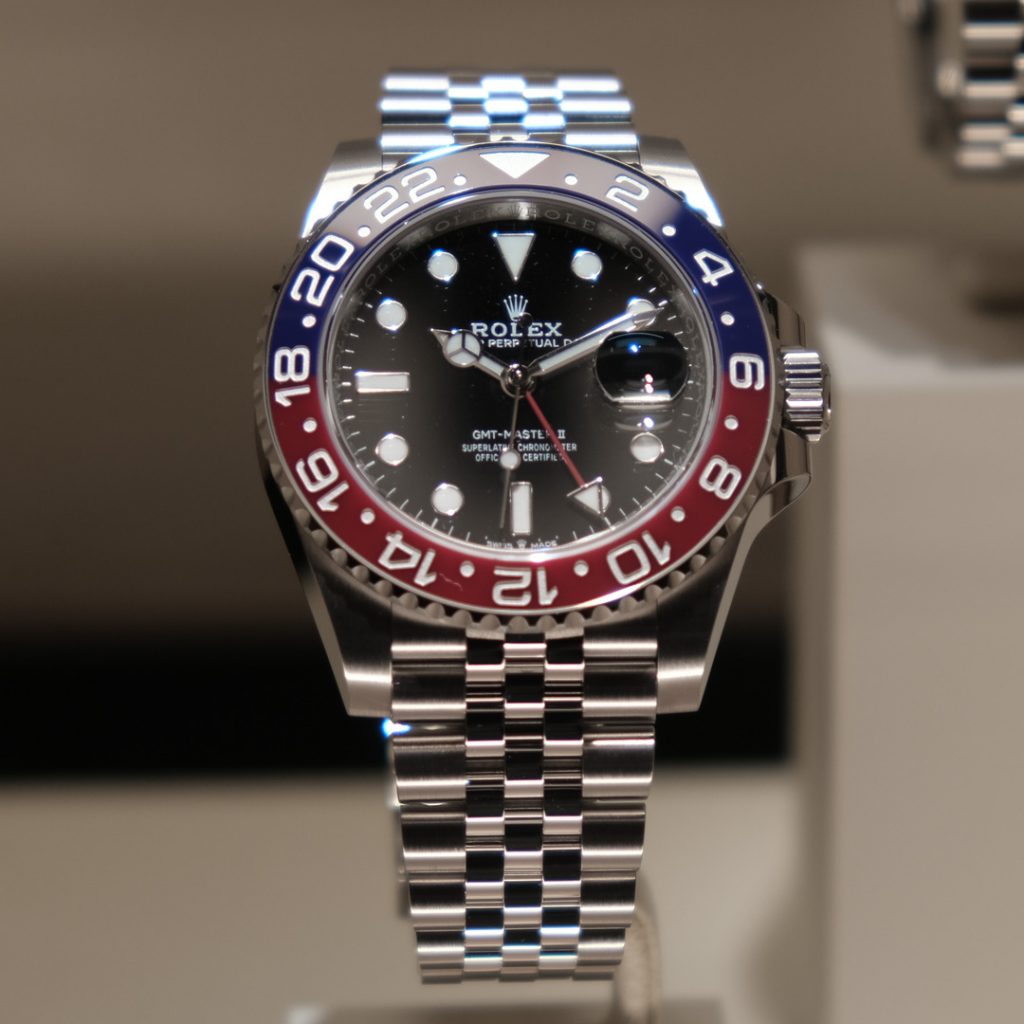 The watch features the relatively new Calibre 3285, manufactured in house of course. An automatic movement (Superlative ChronometerChronometer A chronometer watch movement is a high-precision movement that has been certified by an official organization, such as the Swiss Official Chronometer Testing Institute (COSC) or other similar bodies, as meeting certain standards of accuracy and performance. These standards include requirements for the rate of the watch, its resistance to temperature and other environmental factors, and its power reserve. Chronometer watches are tested for several days, in different positions, and at different temperatures to ensure their precision. [Learn More] which means both COSC and another Rolex certification after casing) which is precise to plus and minus two seconds a day, and features a 70 hour power reserveRéserve de marche Also known as Power Reserve. A watch's power reserve refers to the amount of time a mechanical watch can run without being wound. The power reserve of a mechanical watch can vary depending on the size of the mainspring, the efficiency of the gear train, and the rate at which the mainspring releases energy. If a watch has a Power Reserve 'complication' it simply means that the status of the power reserve can be seen on the watch itself (either on the dial or movement side of the watch). [Learn More]. The calibre also allows independent rapid-setting of the hour hand, a very nice feature for the frequent travelers. You might also have noticed, it features a date function.

Adding up all the details, the finishing, accuracy and reliability – you basically end up with a highly accurate, highly robust GMT wristwatch.

Its only fault? It currently has a hidden complication for most of us which is – an inexplicably long – waiting list.