Anyone who’s been with us for a while now, will know that I have a soft spot for Czapek & Cie. I just love the whole idea and community driven aspect of the brand. Czapek had a wide range of watches to present at SIHH and Baselworld this year, and this one had my attention in more ways than one. It features a ‘simple’ stainless steel case, amps up the volume with a handcrafted ‘panda’ enamel dial, those typical Fleur de Lys hands that you find on Czapek, and to finish things of it is of course a Certified ChronometerChronometer A chronometer watch movement is a high-precision movement that has been certified by an official organization, such as the Swiss Official Chronometer Testing Institute (COSC) or other similar bodies, as meeting certain standards of accuracy and performance. These standards include requirements for the rate of the watch, its resistance to temperature and other environmental factors, and its power reserve. Chronometer watches are tested for several days, in different positions, and at different temperatures to ensure their precision. [Learn More] (COSC). 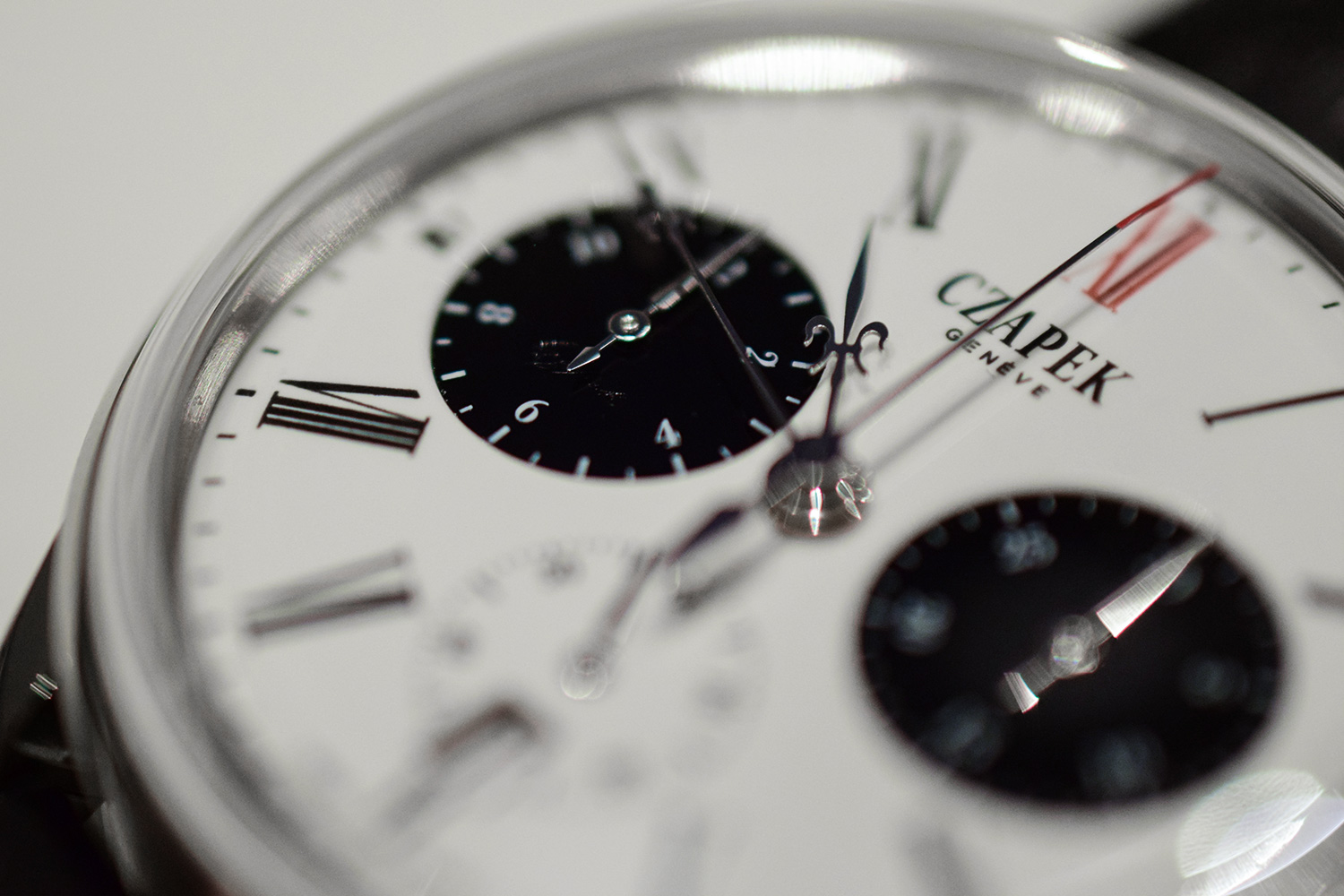 If you are not familiar with Czapek & Cie yet, do yourself a favour and read our past coverage of them right here. It is a gem hidden in plain sight of the watch industry.

For a few Baselworld releases Czapek & Cie decided to look further into the art of enamelling as a way to extend the aesthetic range of some existing models. “Enamel is durable and it renders colour with a special feeling of depth,” says CEO Xavier de Roquemaurel. “So we decided to tap into our partnerships with Donzé Cadrans and Metalem to create new dials for present and future owners and to pay tribute to our concept of horizontal manufacturing.” Mind you, enameling is as beautiful as it is a pain to get just right, so it is a real treat to see the brand move into this often feared territory. 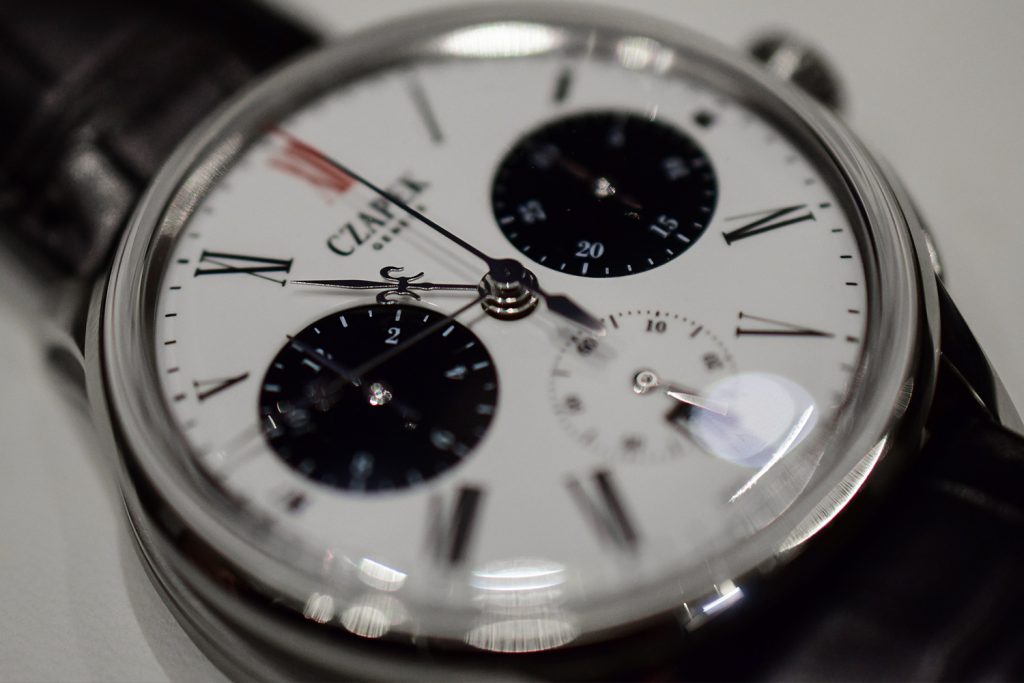 “The brilliant Grand-Feu white dial harmonises well with the keenedged 42.5-millimeter steel case. It gives the watch a natural lightness and clarity.” Worth  a mention is that the black subdials are indeed also enamel, pretty much the toughest enamel colour to get just right because any flaw will be highly visible. Czapek also has its stereotypical hidden signature at 9 o’clock by the way, looks like it was hidden great as I didn’t manage to capture it under the Baselworld lighting..

The watch features the CaliberCaliber The caliber ('movement') is the heart and engine of a watch. It consists of a number of interconnected components that work together. Energy is transmitted through the gear train, to the escapement mechanism. The escapement mechanism releases this energy in a controlled manner. This drives the gear train, which ultimately rotates the hands of the watch and keeps time. [More Info] SXH3, a Haute Horlogerie integrated automatic
ChronographChronograph A chronograph complication is a feature in a watch that allows the wearer to measure elapsed time in addition to telling the time. It works by having a separate set of gears and levers, called the chronograph mechanism, which is activated by pressing a button or a pusher. The chronograph mechanism starts and stops the chronograph's second hand, which is usually located on the watch's dial, separate from the regular watch hands. The elapsed time is usually displayed on a sub-dial or a register on the watch's dial. [Learn More] movement with a bespoke execution featuring a power reserveRéserve de marche Also known as Power Reserve. A watch's power reserve refers to the amount of time a mechanical watch can run without being wound. The power reserve of a mechanical watch can vary depending on the size of the mainspring, the efficiency of the gear train, and the rate at which the mainspring releases energy. If a watch has a Power Reserve 'complication' it simply means that the status of the power reserve can be seen on the watch itself (either on the dial or movement side of the watch). [Learn More] of 65hours. Very El Primero-Like it beats at a frequency of 5 Hz – 36’000 VpH
Also, notice the Golden Occiliating weight with Czapek logo and the finely sandblasted & diamond polished anthracite bridgesBridges The bridges of a watch movement are the metal plates that hold the wheels and other components of the movement in place. They are attached to the main plate of the movement with screws. Bridges are used to support the balance wheel, the escapement, the mainspring barrel and other elements. Combined with the main plate they are the foundation of any watch movement. [Learn More] and the snailed trottoirs. 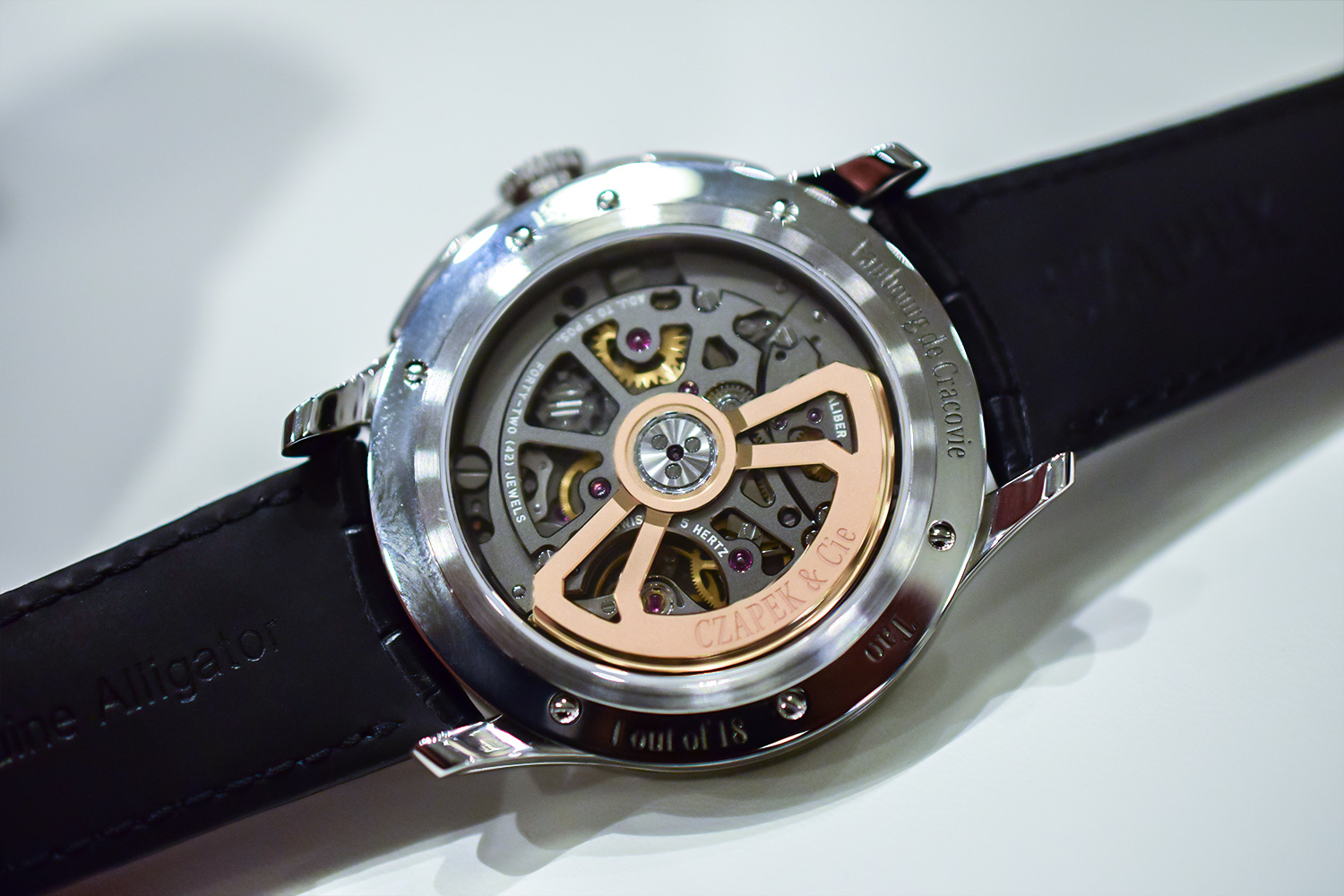 The result is the Faubourg de Cracovie Tao, an unprecedented black
and white Grand-Feu enamel “panda” watch. “The two subdials at 9 and 3 o’clock have been slightly sunken into the striking white dial and appear in shiny black, like the eyes of a panda – the famous analogy used to describe such chronographs. The subsidiary seconds dial at 6 o’clock has remained white, with the date almost incorporated creating a kind of mouth for the panda. Finally, the 12 in Roman numeral is still red as a focal point of the watch. It’s where everything begins.”

“These impulses have come from the owners and members of the company,” de Roquemaurel points out. “Together with our manufacturing partners we are engaged in an extraordinary adventure to unleash all the potential of Czapek, whose spiritus rector and original founder, François Czapek, was an outstandingly creative watchmaker.” 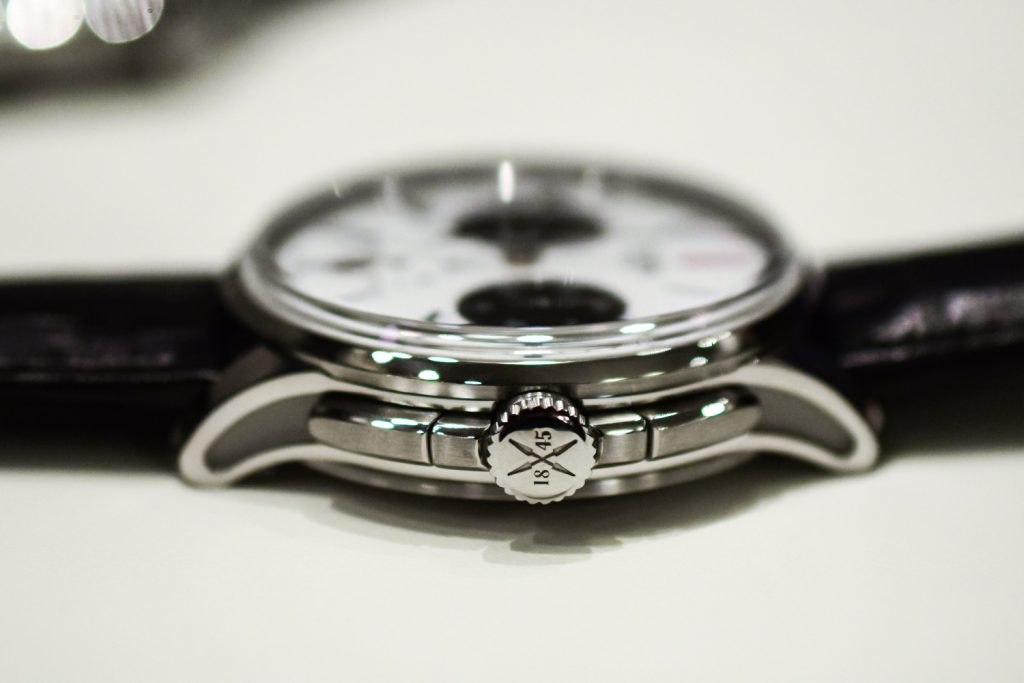 The case is just as impressive. Its stainless steel, and has some insanely gorgeous lines for both the case and the pushers. A lot of thought went into that design and balances superbly with the overall look of the dial. The crownCrown The knob on the outside of the watch that you typically use to either wind the mainspring or set the time [Learn More] guards are also pushers and notice how nice and comfy the lugs taper down for a great fit on the wrist. 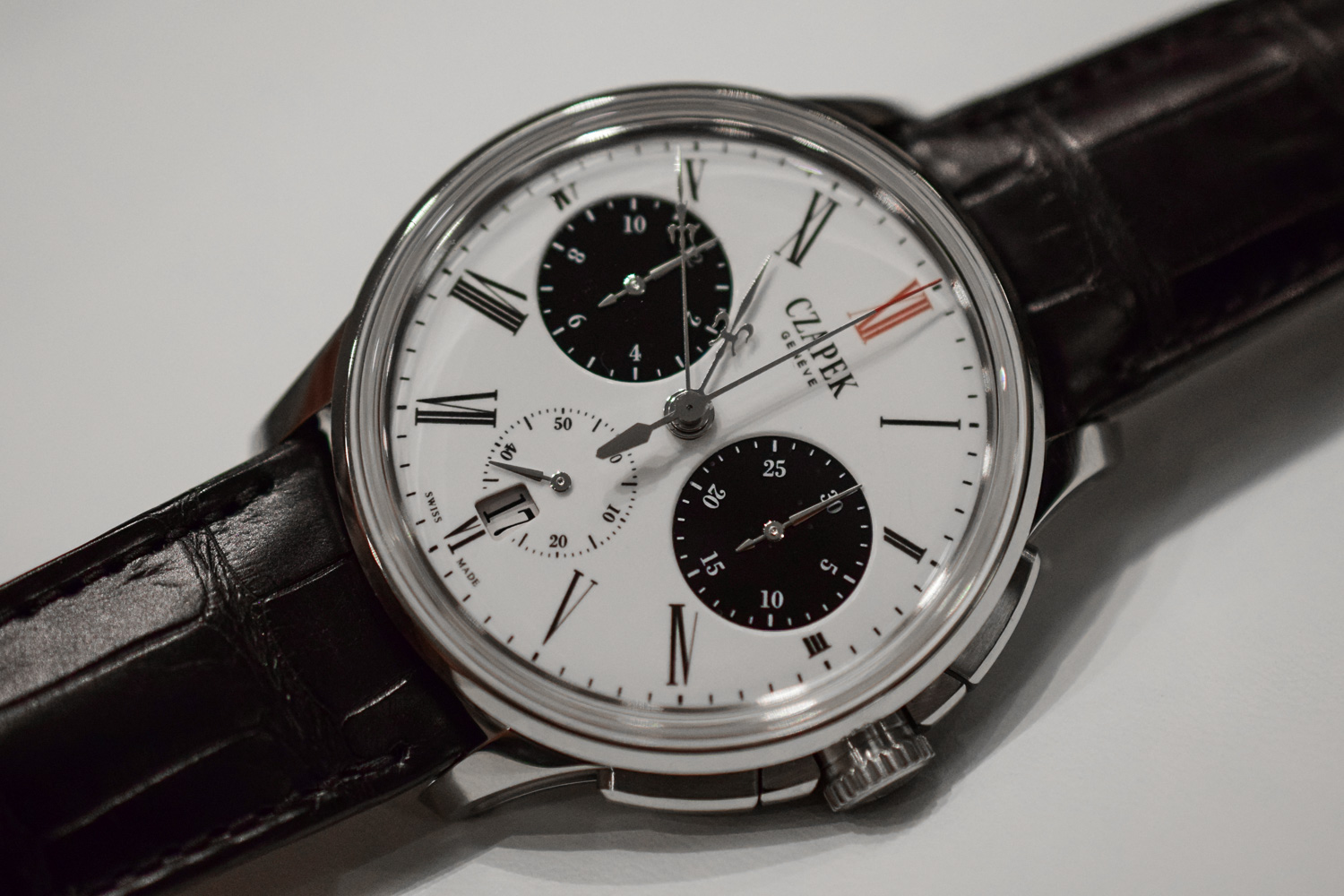