As the name suggests, this Maxichrono is a re-edition from a 2006 release of theirs. “A model that was pure, absolute and radical in its approach, thanks to its principle of five hands mounted on a single central axis and controlled by a simple single pusher…”. Word of caution, only TEN of these will see a release. Exclusivity is the name of the game here.

The resulting look of the final watch is 100% De Bethune, there is no mistaking this for anything else. Purely visually speaking this really takes on a toolwatch like allure, a nod back to the old -world Chronographs. Make no mistake about it however, we’re talking De Bethune, this is haute horlogerie and watchmaking of the 21st Century on full display.

The five central hands are hand-polished steel (for hours and minutes hands) and flanked by flame-blued steel chronographChronograph A chronograph complication is a feature in a watch that allows the wearer to measure elapsed time in addition to telling the time. It works by having a separate set of gears and levers, called the chronograph mechanism, which is activated by pressing a button or a pusher. The chronograph mechanism starts and stops the chronograph's second hand, which is usually located on the watch's dial, separate from the regular watch hands. The elapsed time is usually displayed on a sub-dial or a register on the watch's dial. [Learn More] hours and seconds indicators The three-dimensional dial is constructed on different levels to maximise readability and just looks fantastic too. 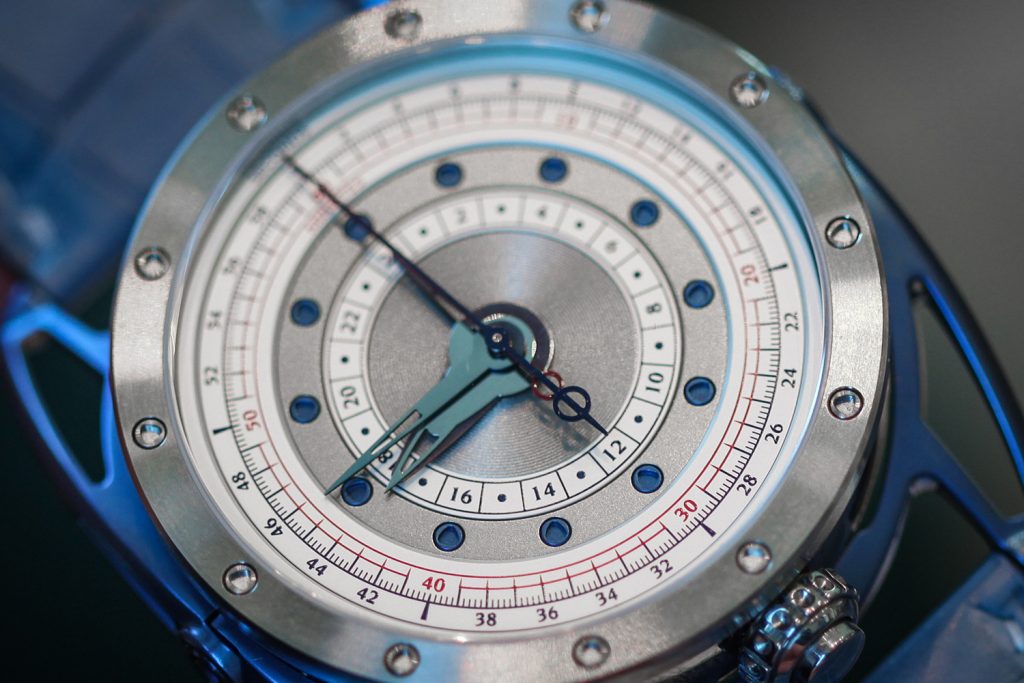 In the centre, on a single axis, are five (!) hands following a vertical sequence of carefully fitted pillars and wheels… a real technical feat according to De Bethune.

Like most things that appear simple, it takes a lot of effort and technical complexity to get to that point. It involves a mechanism that operates “with several interdependent column wheels, all five axes in the centre, embedded into each other and yet working independently.”

Each can be zero-reset on demand, and autonomously restart. The real kicker of course is that everything is controlled by one and the same pusher, positioned at 6 o’clock. To some standards, it is a relatively big  wristwatch measuring in at 44mm. However, it features those De Bethune articulating lugs (floating lugs according to De Bethune), it wears so very comfortable as the entire watch molds around your wrist. Truly exceptional.

The watch is not heavy at all, since it is made out of Grade 5 Titanium. 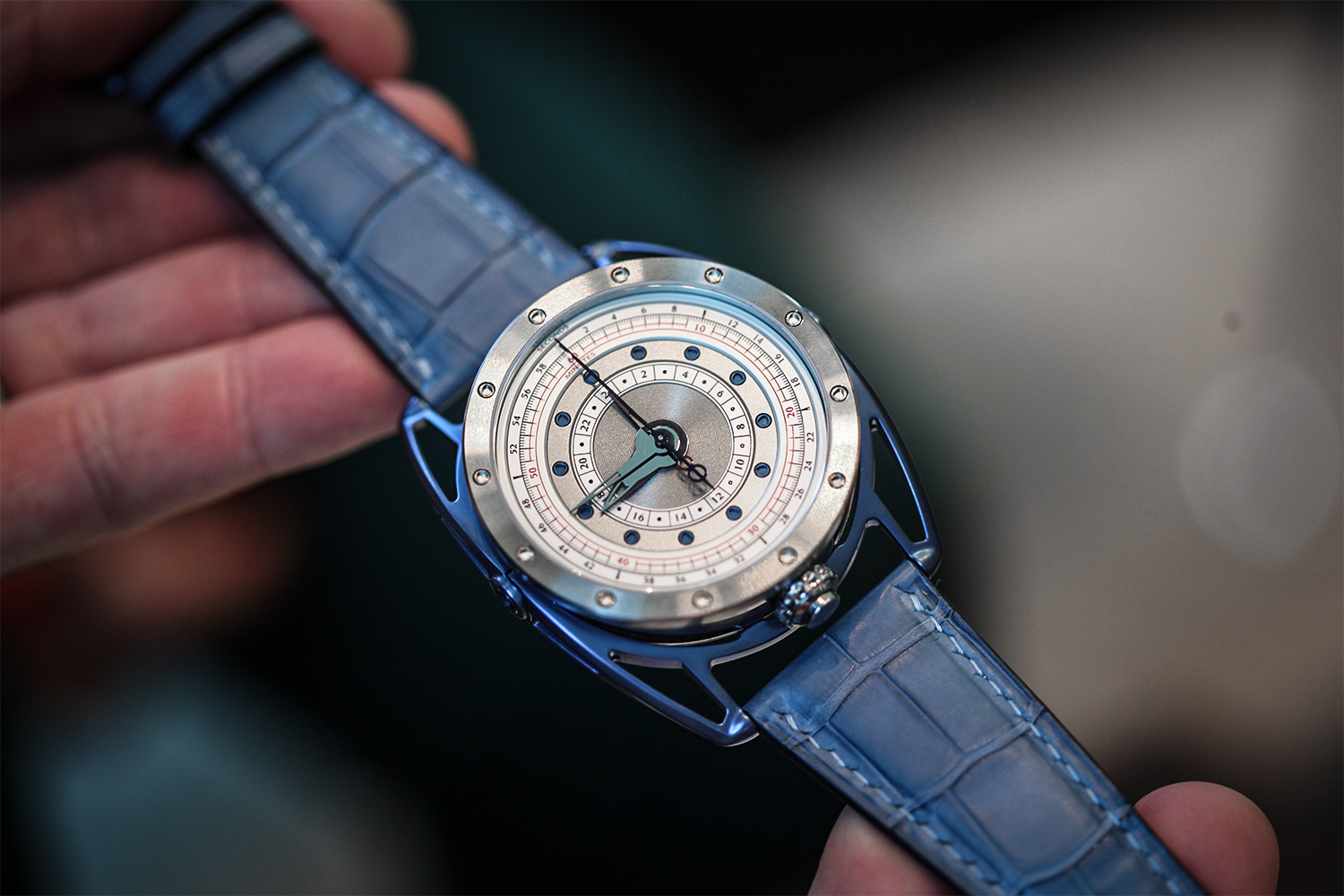 Beating at a frequency of 36,000 vph, enabling fifth-of-a-second readings, the DB2030 movement is equipped with the De Bethune absolute clutch, a patented system resulting from more than seven years of research and development. BridgesBridges The bridges of a watch movement are the metal plates that hold the wheels and other components of the movement in place. They are attached to the main plate of the movement with screws. Bridges are used to support the balance wheel, the escapement, the mainspring barrel and other elements. Combined with the main plate they are the foundation of any watch movement. [Learn More] are mirror-polished, sandblasted and snailed by hand. Steel parts are polished and chamfered by hand. 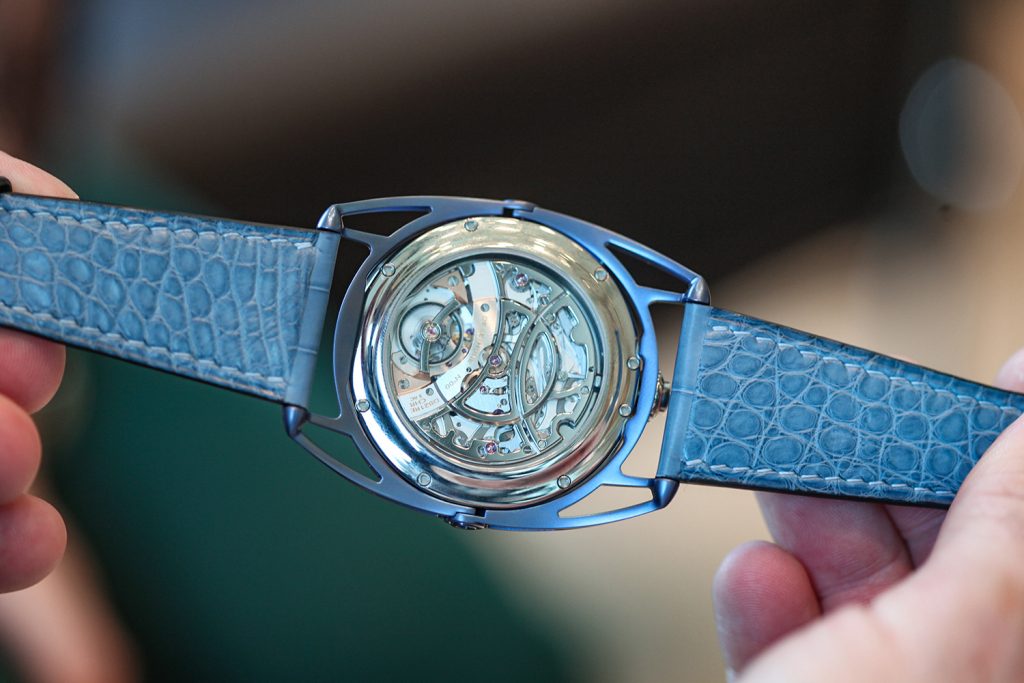 This clutch mechanism “makes the most of the advantages of the horizontal and vertical clutch systems while eliminating their faults. It thus benefits from a marked reduction in the friction that affects the movement both when the chronograph is running and when it is functioning without the chronograph engaged. The absolute clutch operates in a system engaging the two traditional clutch methods to allow the different chronograph counters to function semi-autonomously” 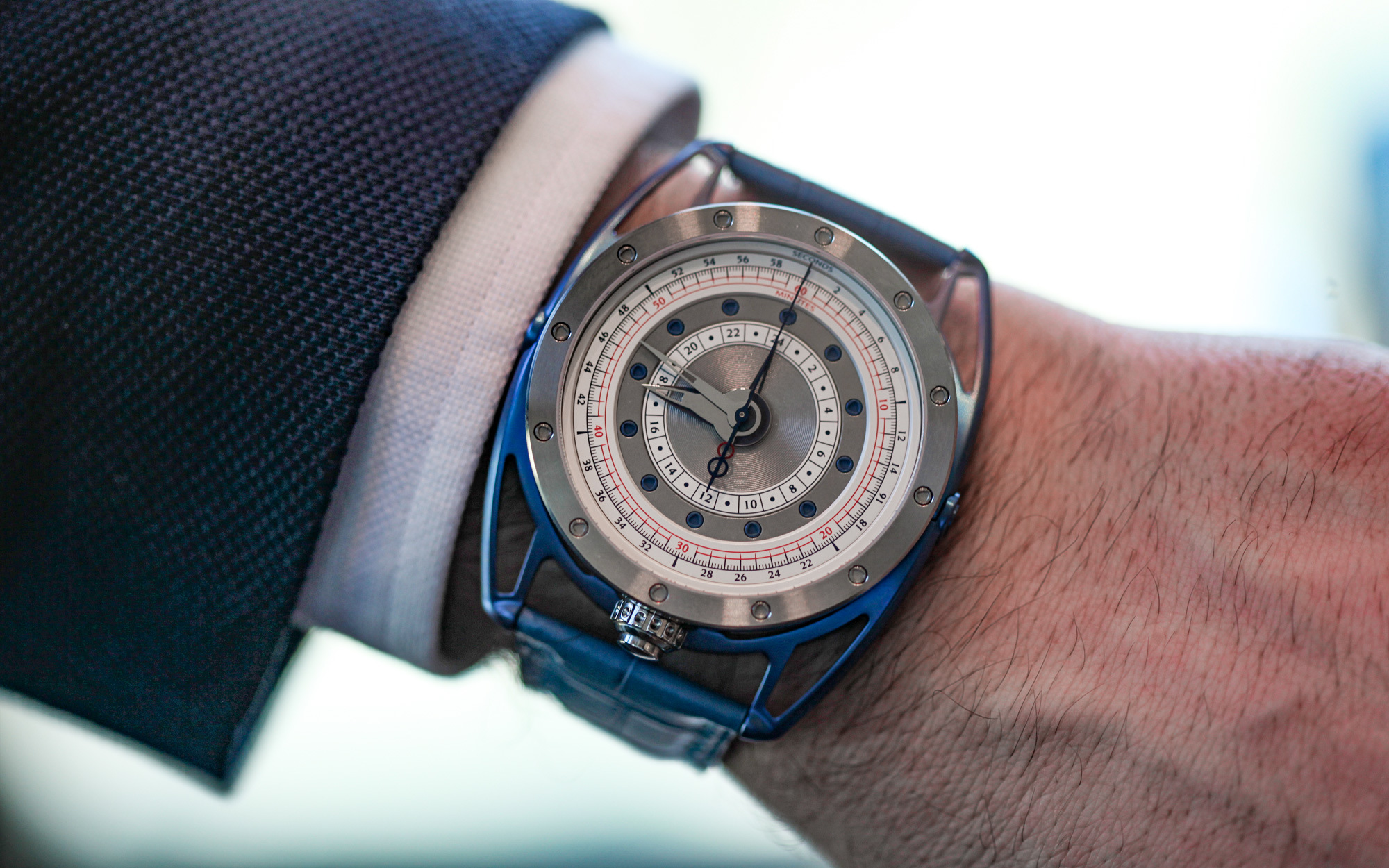