The Lange 1 turned 25 this year and A. Lange & Söhne decided it was not going to let that anniversary slip by unnoticed.

To mark the occasion, A. Lange & Söhne has release the Lange 1 ’25th Anniversary’ edition, which is limited to 250 pieces and priced at approx EUR 44K. That is a hefty premium over a non-anniversary Lange 1 release. So let’s see what that extra 10K (give or take) actually gets you. At first glance, it is a pretty familiar sight, isn’t it? 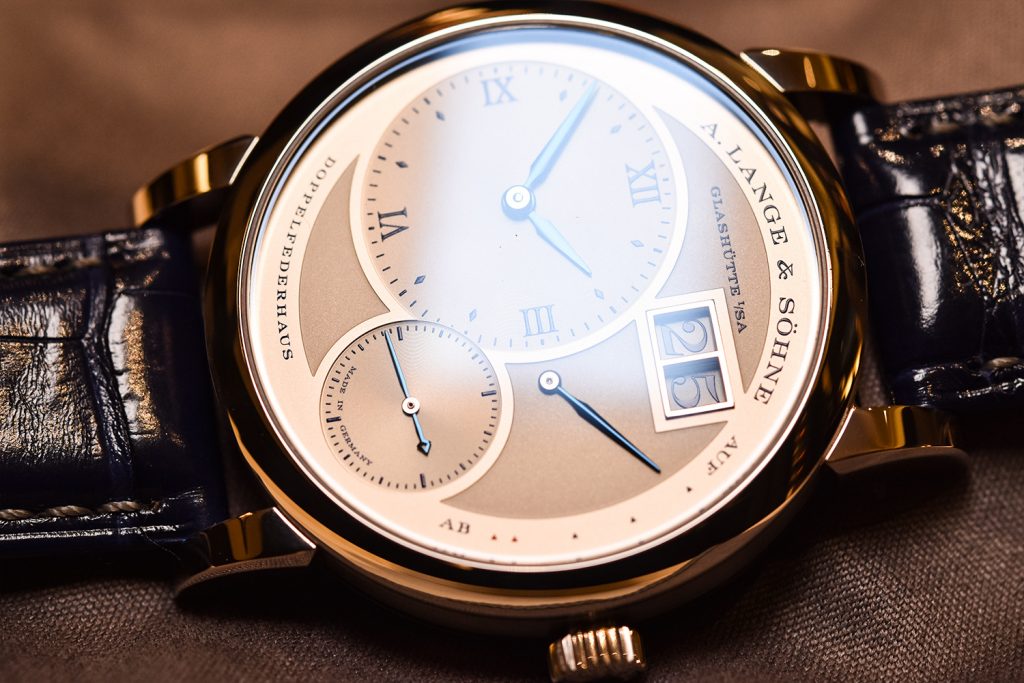 This is a Lange 1, that from the face of it, looks like a Lange 1. There’s nothing that immediately tells me ‘Anniversary / Limited Edition’. The dial shows visually very interesting recesses, and a lot of blue accents: deep-blue numerals, blue markers and big blue date numerals. In addition, the hands are made of blued steel.  Despite all this, the Lange 1 keeps its (to my eye) typical stealth appearance that you get with a Lange 1. This is not a watch, and in fact nor a brand, that screams ‘expensive’ to anyone but the connoisseurs. The perfect watch for the discrete gentleman.

Anyone familiar with a Lange 1, will not necessarily be surprised just yet. It does in fact look very much the same like a few other Lange 1’s and in particular the older reference 101.027x. So if not in the front, where does one throw the 25th anniversary party for this Lange? Glad you asked Watson. The answer is, one throws it in the back: 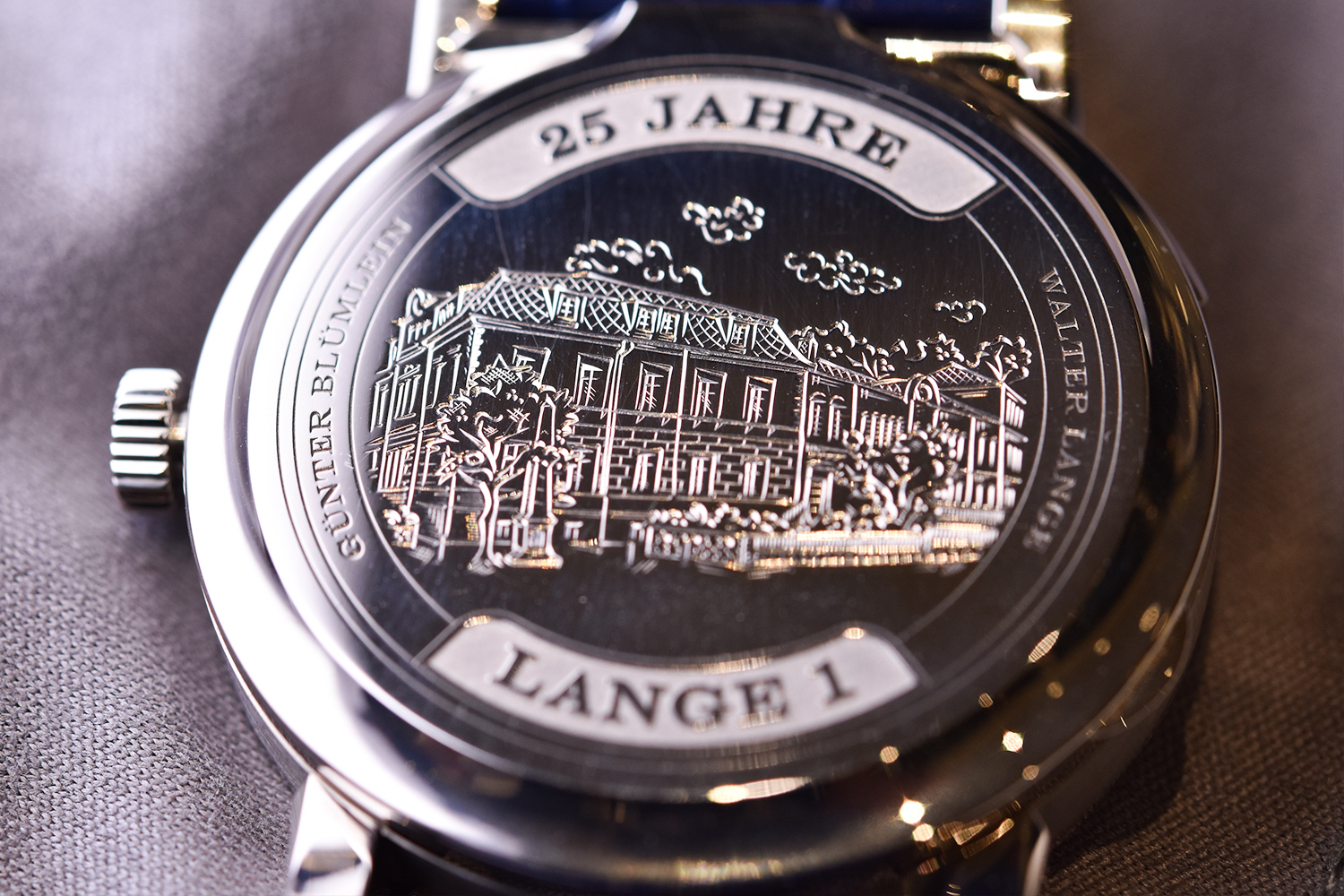 The handengraved caseback leaves little doubt, this watch is all about marking that ’25 JAHRE’ milestone. But lange isn’t necessarily known for its glorious casebacks now is it? No, it is known for its lavishly decorated movements.

So why would they want to hide this from the public eye? The answer is, they don’t. This is a Lange 1 with a hunter case. Flip it open and the Lange 1 reveals all its secrets to the wearer… 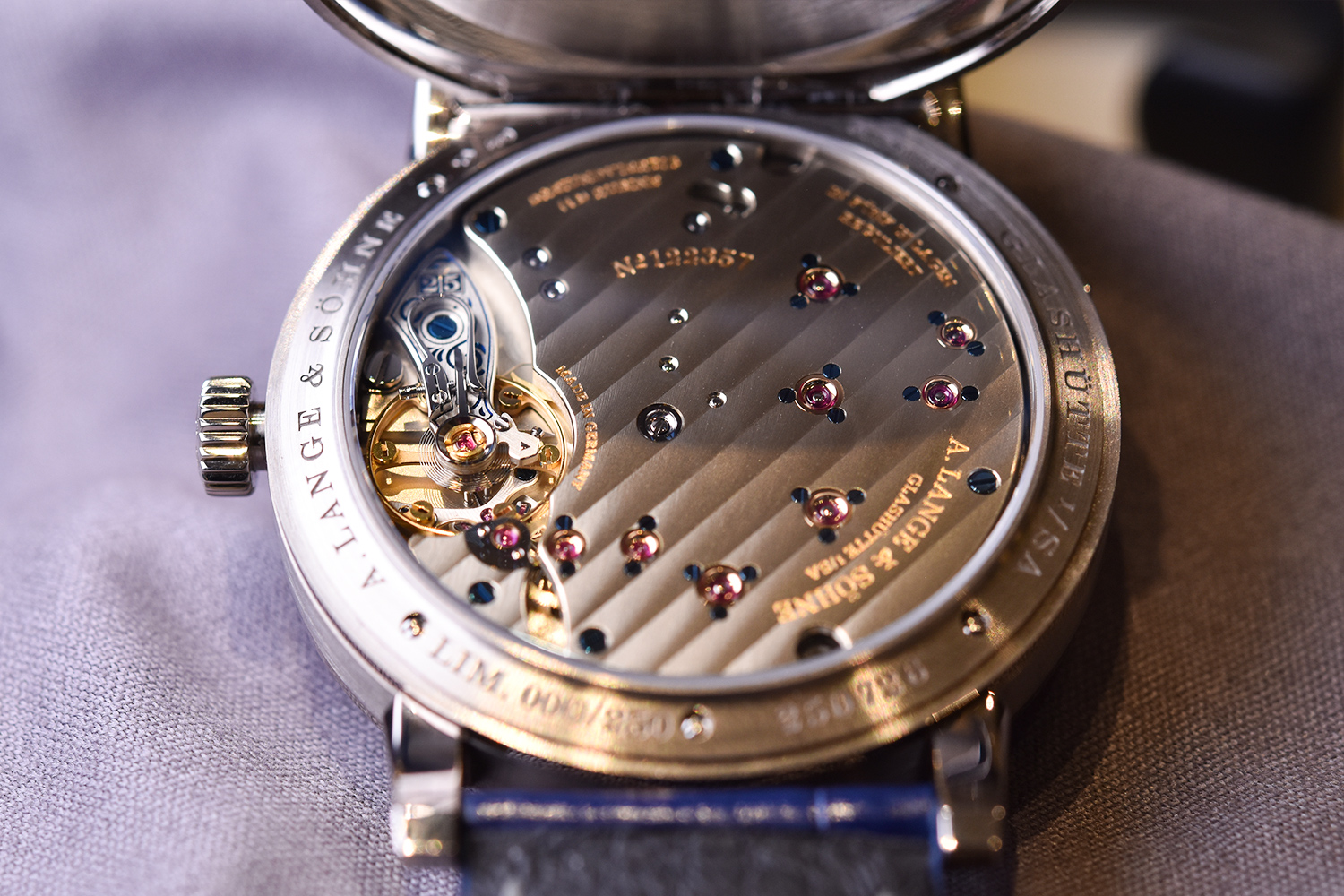 How good is this. A hunter case on a Lange 1. I am a sucker for hunter cases. They are incredibly difficult to get just right, and therefore a rarity in the watch world. Lange executed this of course to perfection and I’m glad they brought the Hunter case to the Lange 1 range (despite this being a limited edition of course).

Moving past the hunter case,  let’s look at the movement and all its details. The gold chatons, those warm german silverGerman Silver German silver, also known as nickel silver and Maillechort, is an alloy made up of copper, nickel and zinc. It is called "silver" because of its silver-like color, but it does not contain any silver. It has a distinct color which develops a warm patina over time [Learn More] bridgesBridges The bridges of a watch movement are the metal plates that hold the wheels and other components of the movement in place. They are attached to the main plate of the movement with screws. Bridges are used to support the balance wheel, the escapement, the mainspring barrel and other elements. Combined with the main plate they are the foundation of any watch movement. [Learn More], the blue’d screws, in typical Lange fashion. 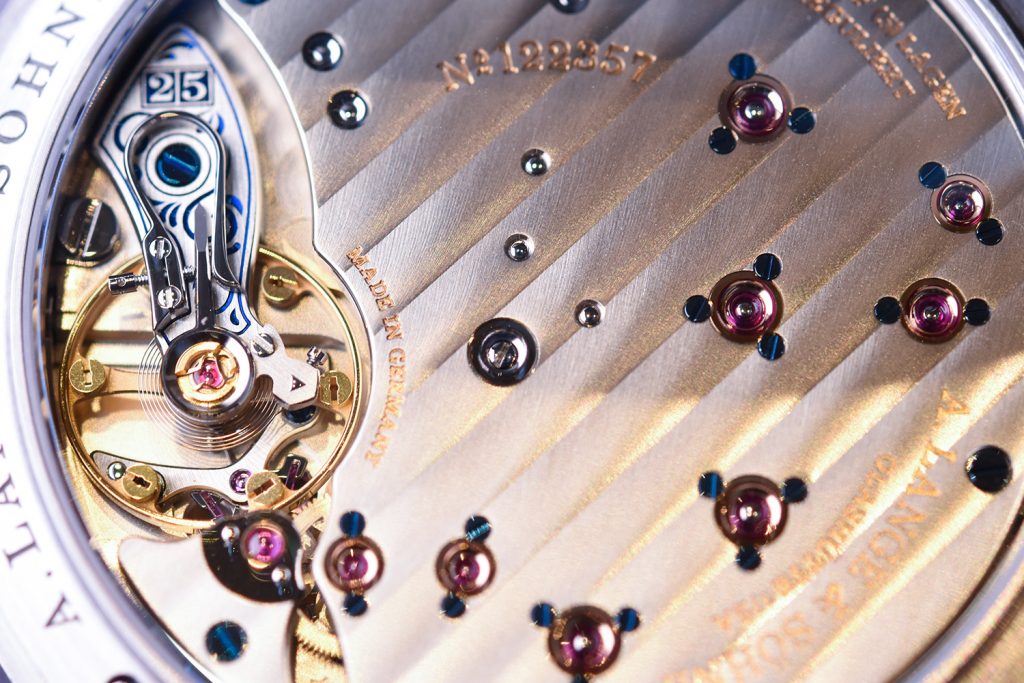 And looking closer to the typically overdecorated balance cockBalance Cock The balance cock holds the balance spring (or hairspring) in place and allows it to be adjusted. The balance cock is attached to the main plate of the movement and sits above the balance wheel. It serves as the base for the hairspring and the mechanism that allows regulating the timekeeping of the watch. [Learn More], you’ll see it has received a special treatment specific to this Anniversary edition. In fact, for the very first time, the engravings on the balance cock have been blued which looks very much in theme with the face of the watch. Notice also the big blue date ’25’. All these details make for one beautiful movement: 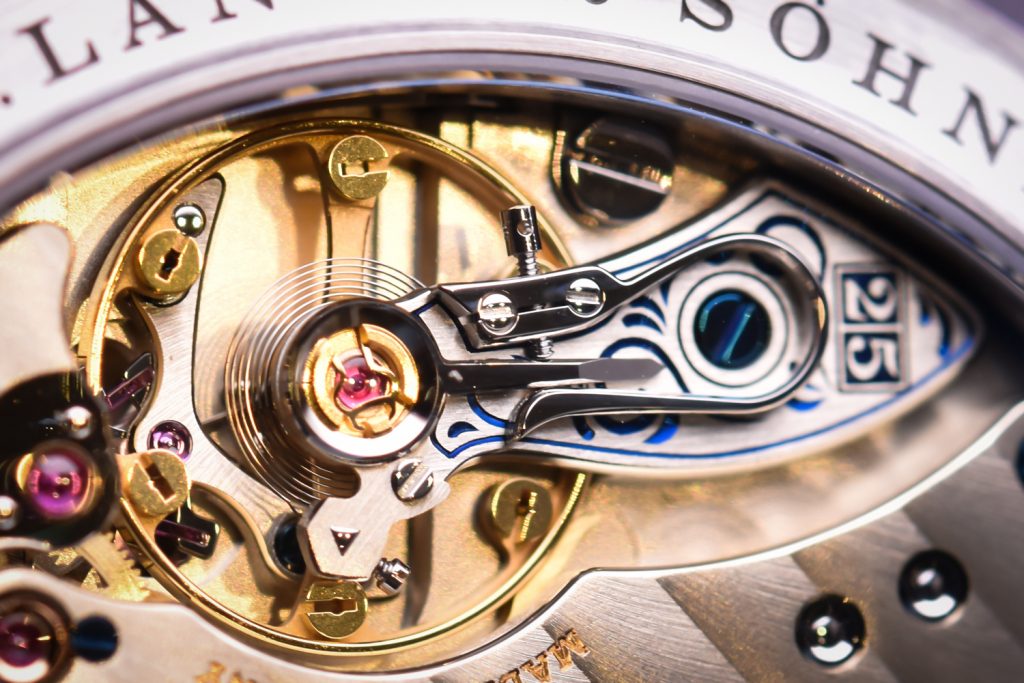 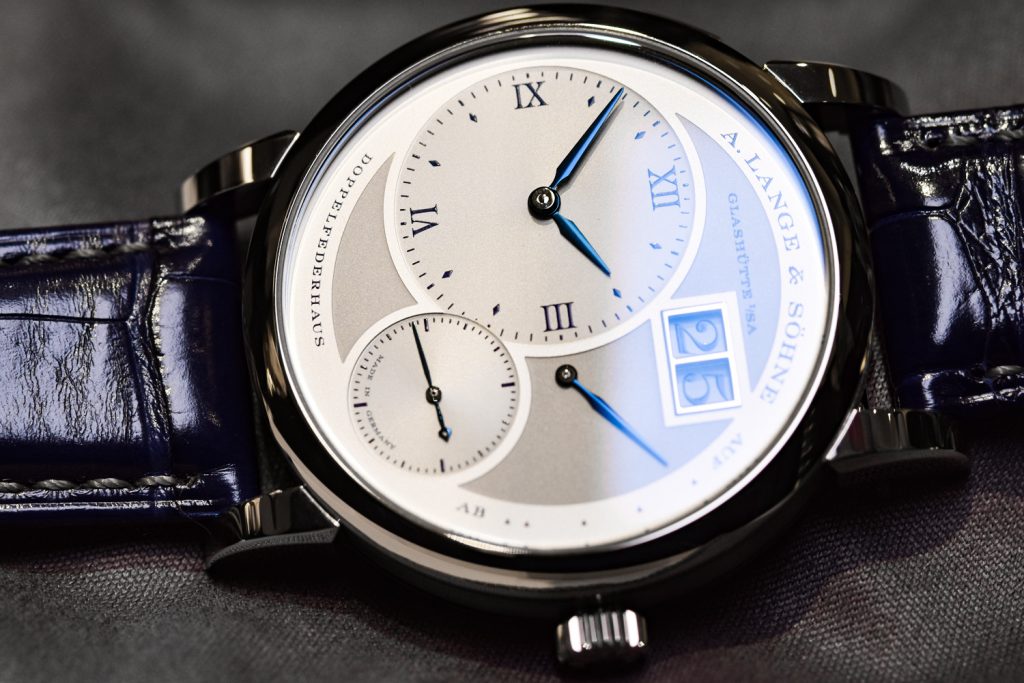