Have any interest in pilot watches? Ever wonder what watches interest a pilot? Let’s see…

Join us as we explore the world of Pilot Watches with none other than one of the Belgian Defence Air Component’s finest. We’ve had the pleasure – no, privilege – to explore the world of Pilots & their watches with the Agusta Helicopter flying Griffon Squadron. These masters of the sky are tasked with a.o. Medical evacuation, Extraction, Observation and Transport. Read along for our most epic report to date. (If you want to skip right down to watches, scroll down to “Instruments & Watches”) 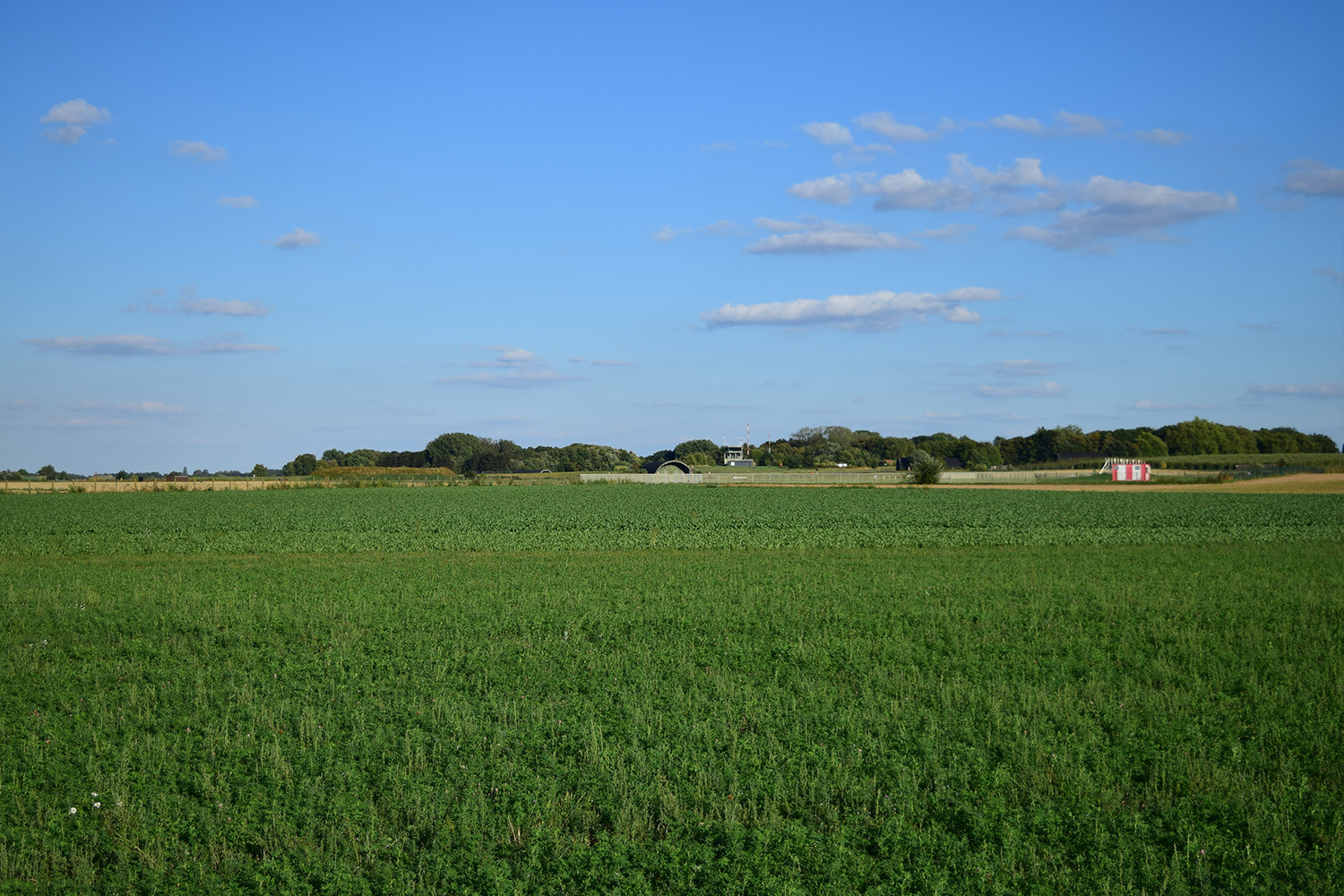 It is in the middle of nowhere, at an airbase somewhere in Belgium, that I’m meeting with a fellow watch enthusiast & Pilot extraordinaire for what was supposed to be a simple delivery. At the moment that I took the above picture, I was relatively stressed out. You see, my navigation skills were letting me down big-time. If there was one thing I knew I had to do that day, it was to be on time. It was the one thing. Be. On. Time. Sadly, my inability to find the entrance led me to losing about half an hour circling the base… A helicopter extraction was not required, ultimately I was spoon-fed the exact coordinates to enter in my GPS. This allowed yours truly, to find the entrance. A ‘Get Together’ of watch enthusiasts, unlike any other was about to unfold.

What shouldn’t come as a surprise, yet is worth describing, is just how vast such an air base really is. Aircraft tend to need space, and not just a little bit of it. Being locked in a small office space for the most part of my life, this was so extremely & inexplicably refreshing.

Walking across the base would take hours, instead we drive (safely) to our first destination.

We were going to get up close and personal with some of these bladed beasts of the sky, exciting times ahead… 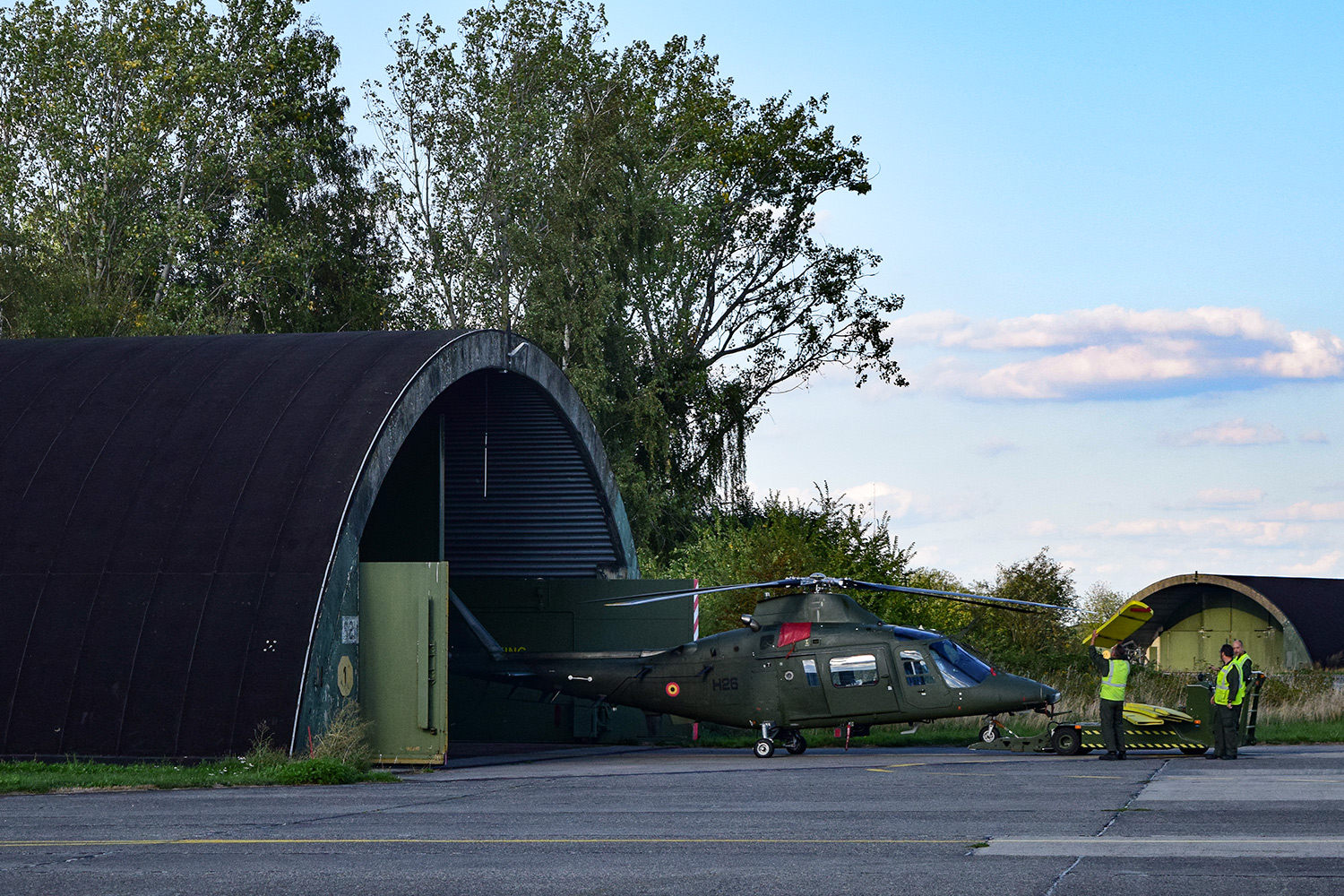 What was supposed to be a quick peek inside a hangar, ended up being a crash course in being a helicopter pilot. “Freaking great” would be a monumental understatement. The below helicopter was in for service. The pictures don’t really translate its size very well. I was surprised to see just how massive this really is when you get close to these. Imagine a – very – big truck with an even bigger rotor on its roof: 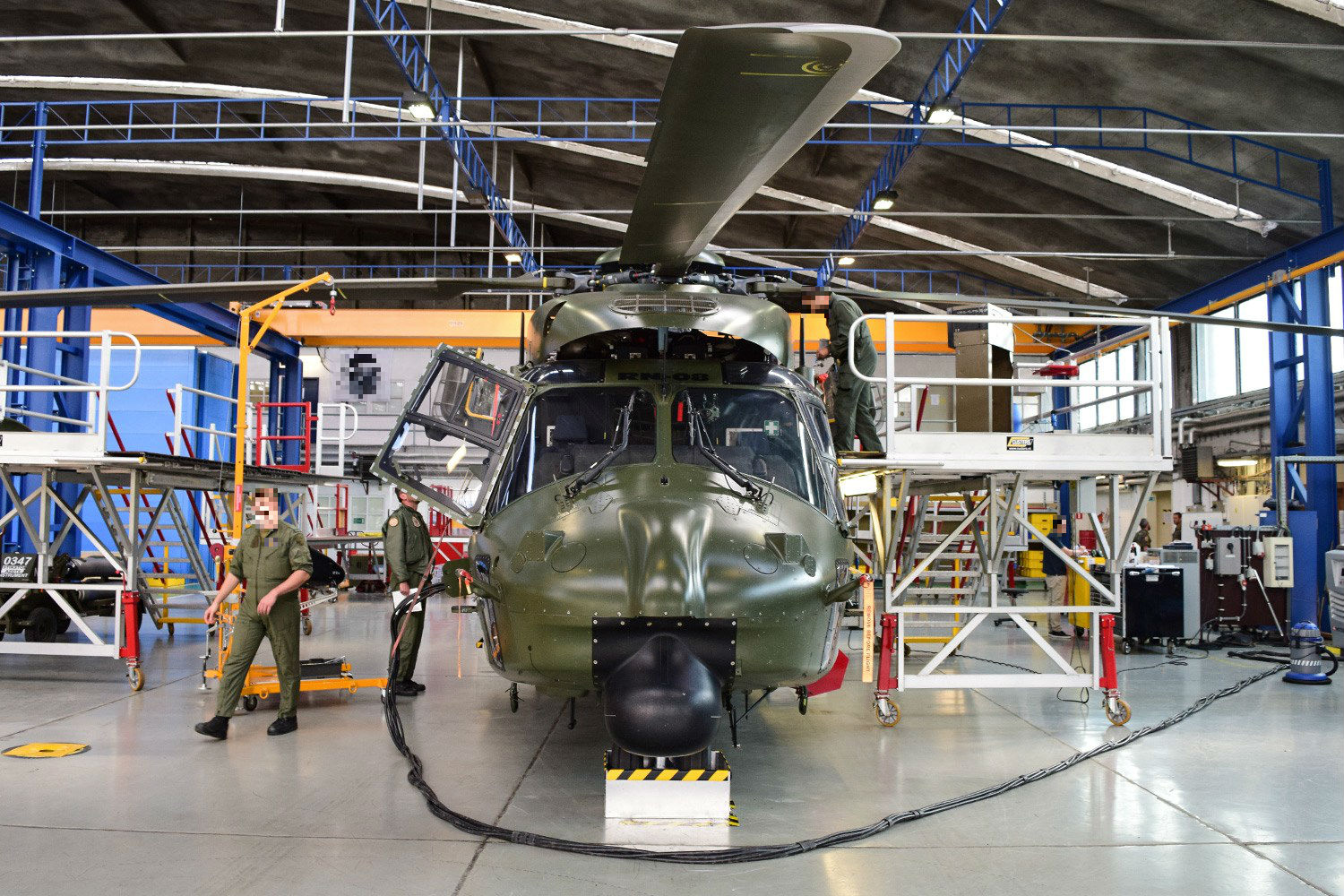 At this point, I’m doing my best (and failing) to keep my cool here as a boyhood dream is unfolding when I’m being asked if I’d like to take a front seat: 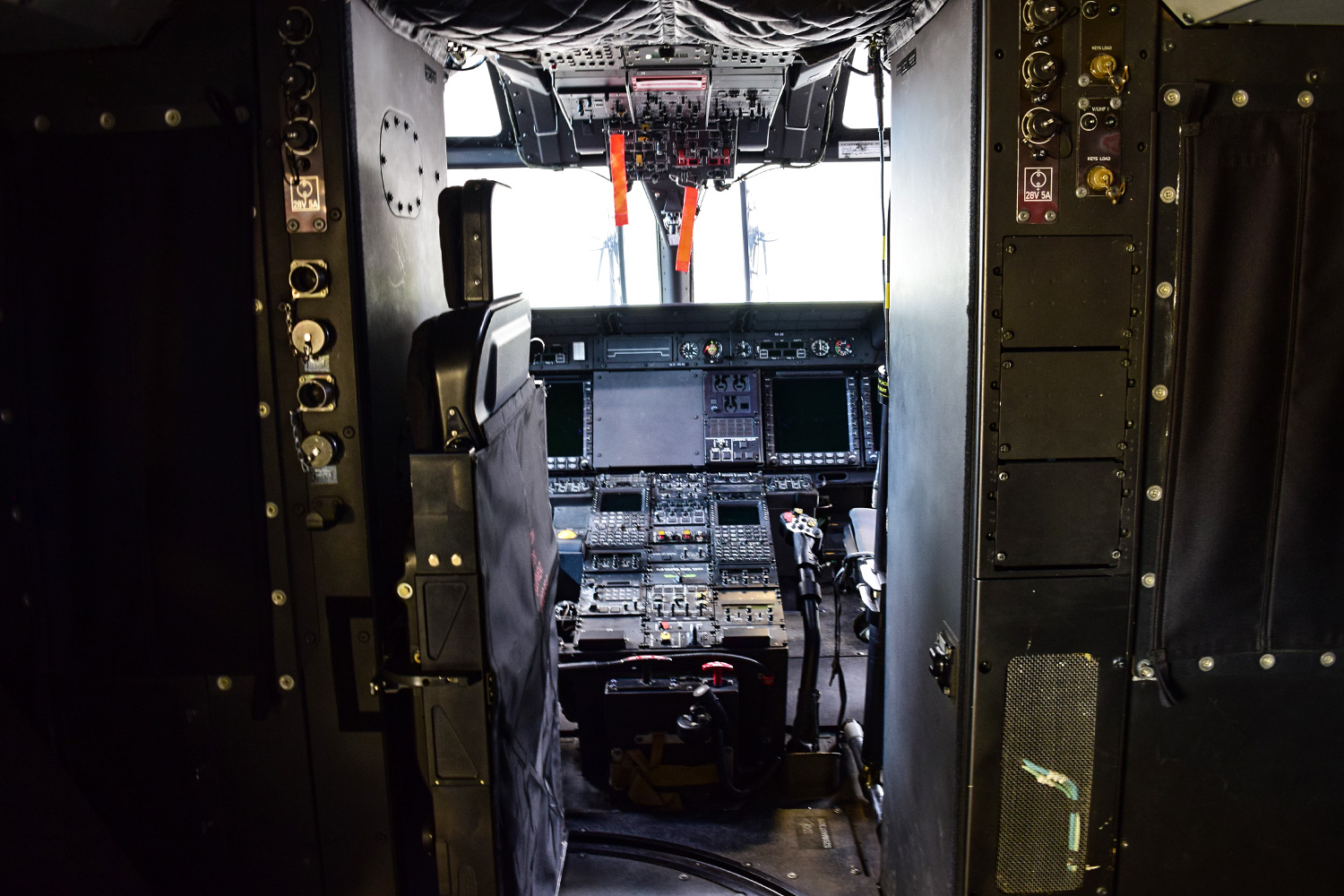 First thing that came out of my mouth at this point was something along the lines of “Wow! This is just like in Mission Impossible!” (I’m so sorry, really). I was also immediately struck by the mix of analog & digital instruments on-board and the sheer number of them. They were everywhere: Left, Right, Top, Down. 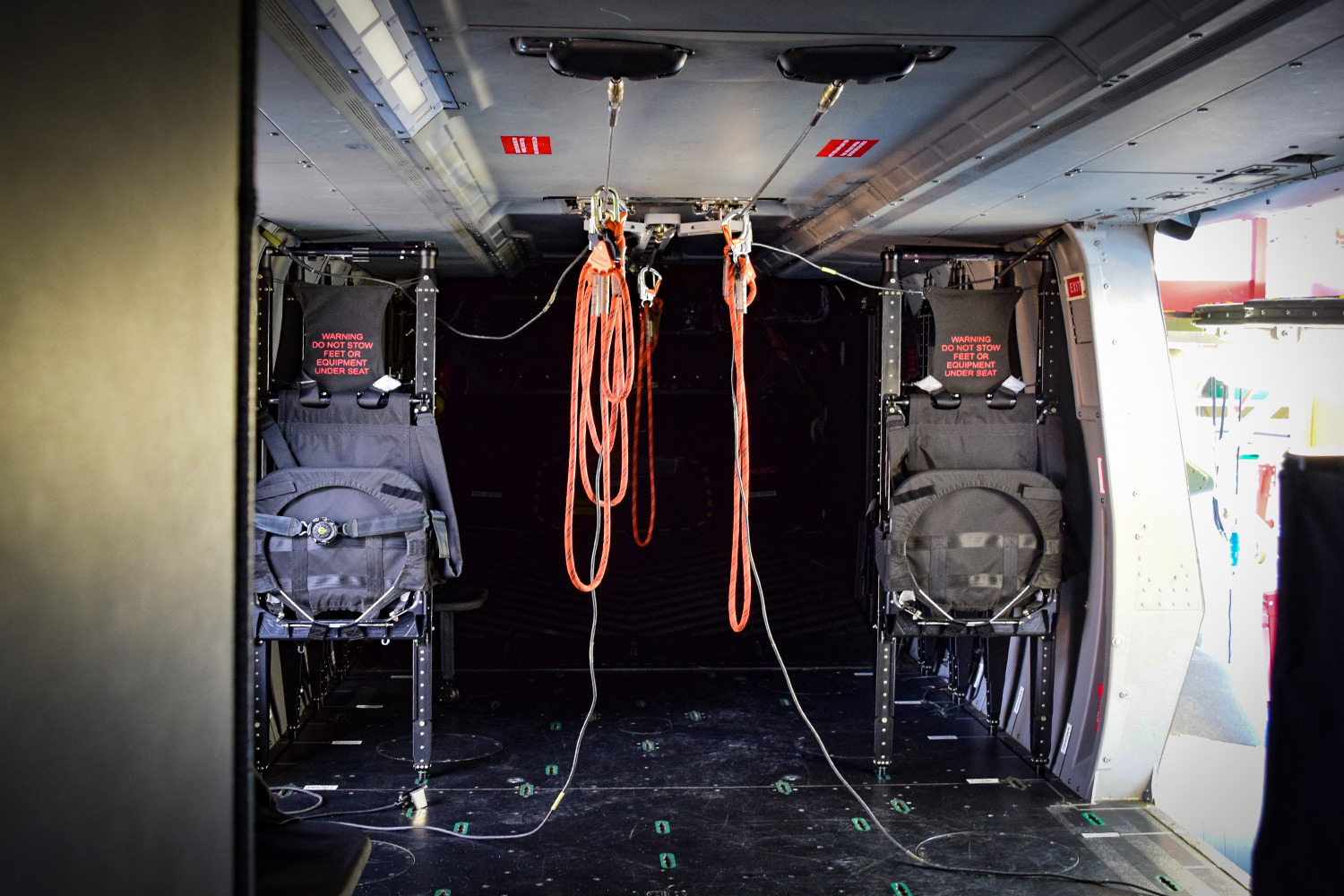 Arguably, on one of the finest moments in my DE GRIFF career, I find myself seated in the front seat of this rotorcraft. At which point I do the only sensible thing that one does in these moments: Take a wristshot, right? 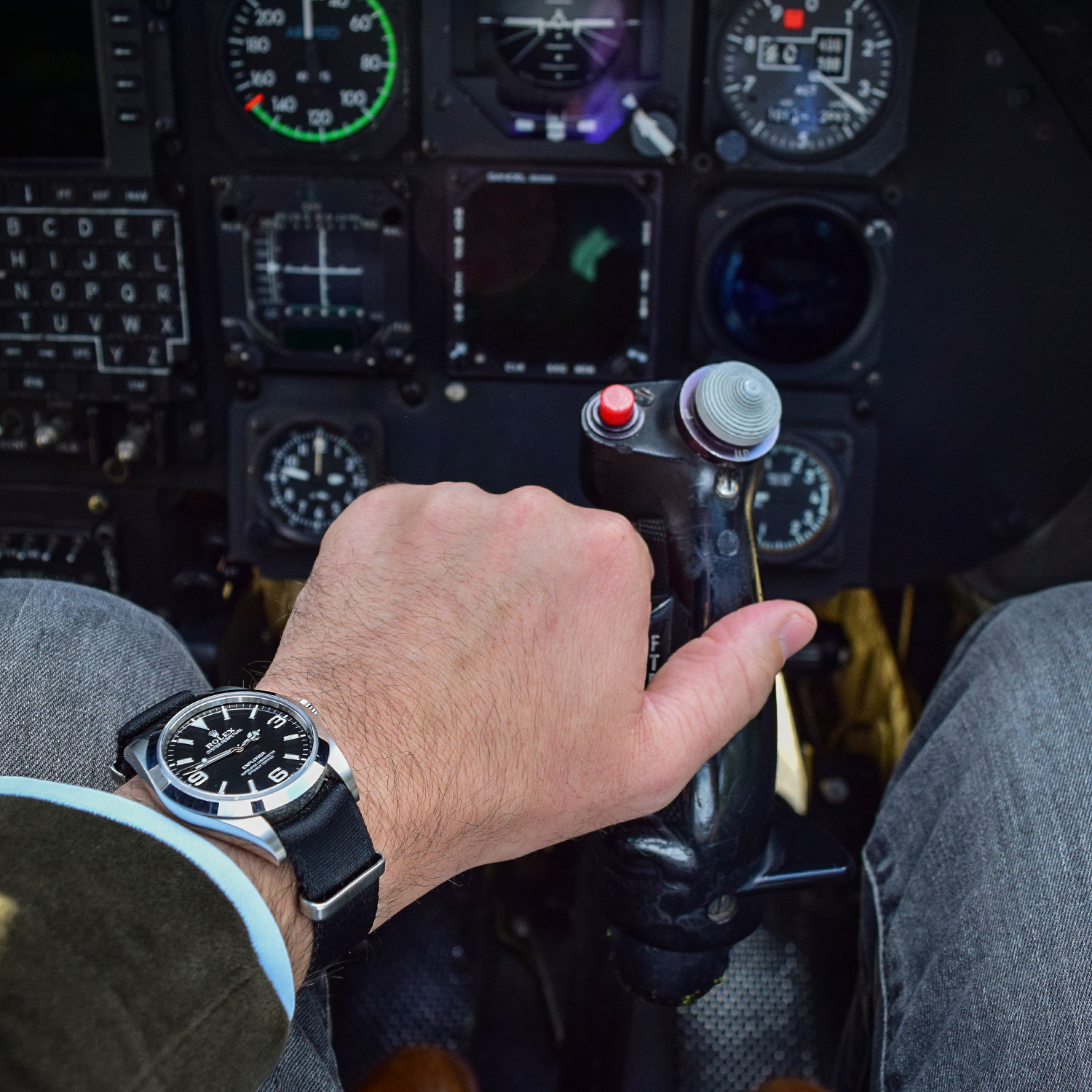 The Captain then goes on to explain to me what all these buttons are for. While I can barely remember any of the details, I will never forget the consequences of certain actions which were repeatedly yet casually mentioned. You see, in my work-life, consequences are at the very worst ‘if you do this, then you get fired’. Here, when certain alarms go off, the explanation was something along these lines: “When light A goes on, it means that X will happen, therefore you should do Y, if not, you’re dead”. Or simply put “If this, then dead”. Okay, you’ve got my attention… 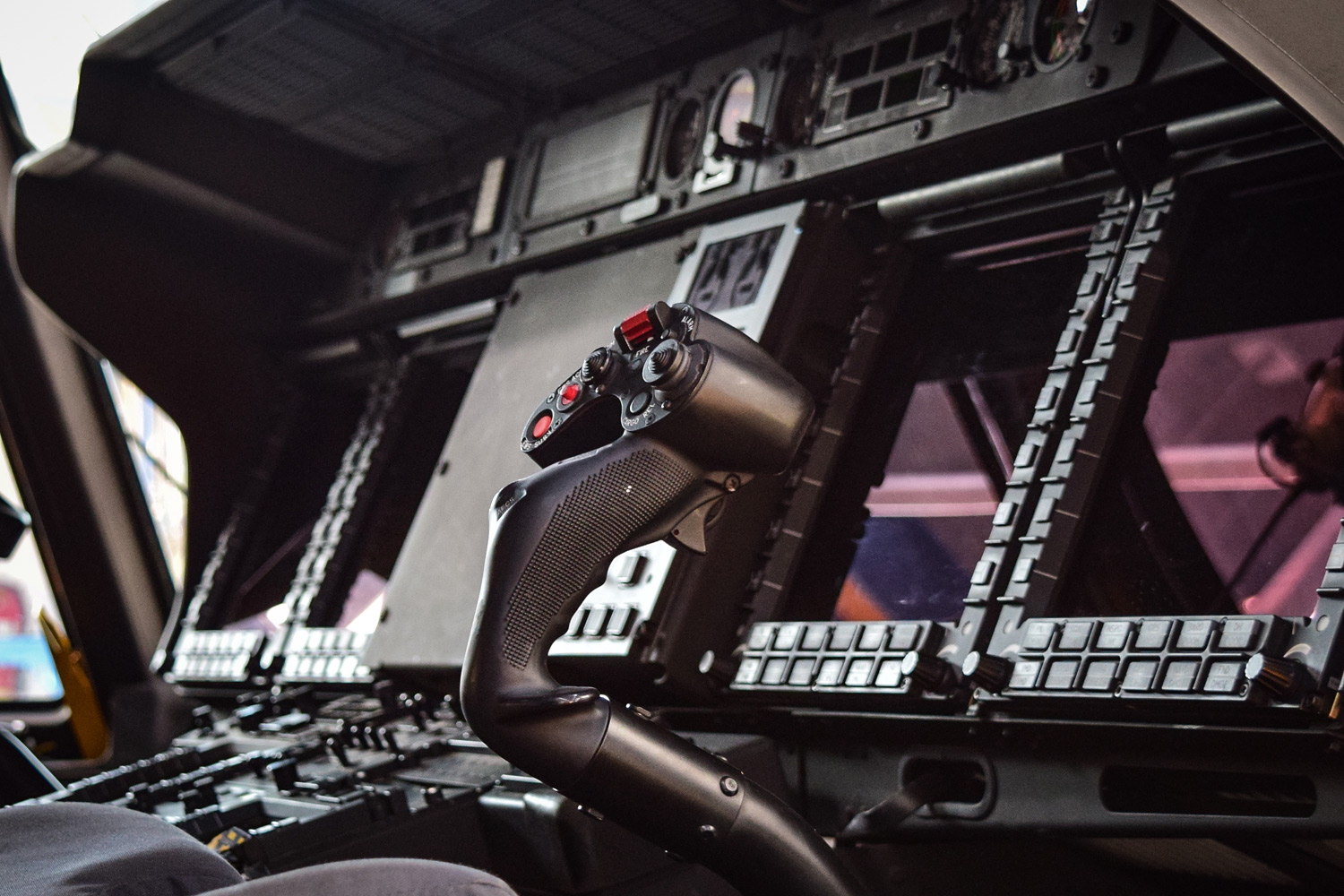 After spending a good amount of time with the NH90, I’m told we’re off to see the Griffon.

After spending some time living the Pilot dream (you can call me Maverick now), I’m told we’re off to see the Griffon emblazoned Helicopter of the Griffon Squadron. The pride & joy of our host and yes, we’re about to start discussing watches: 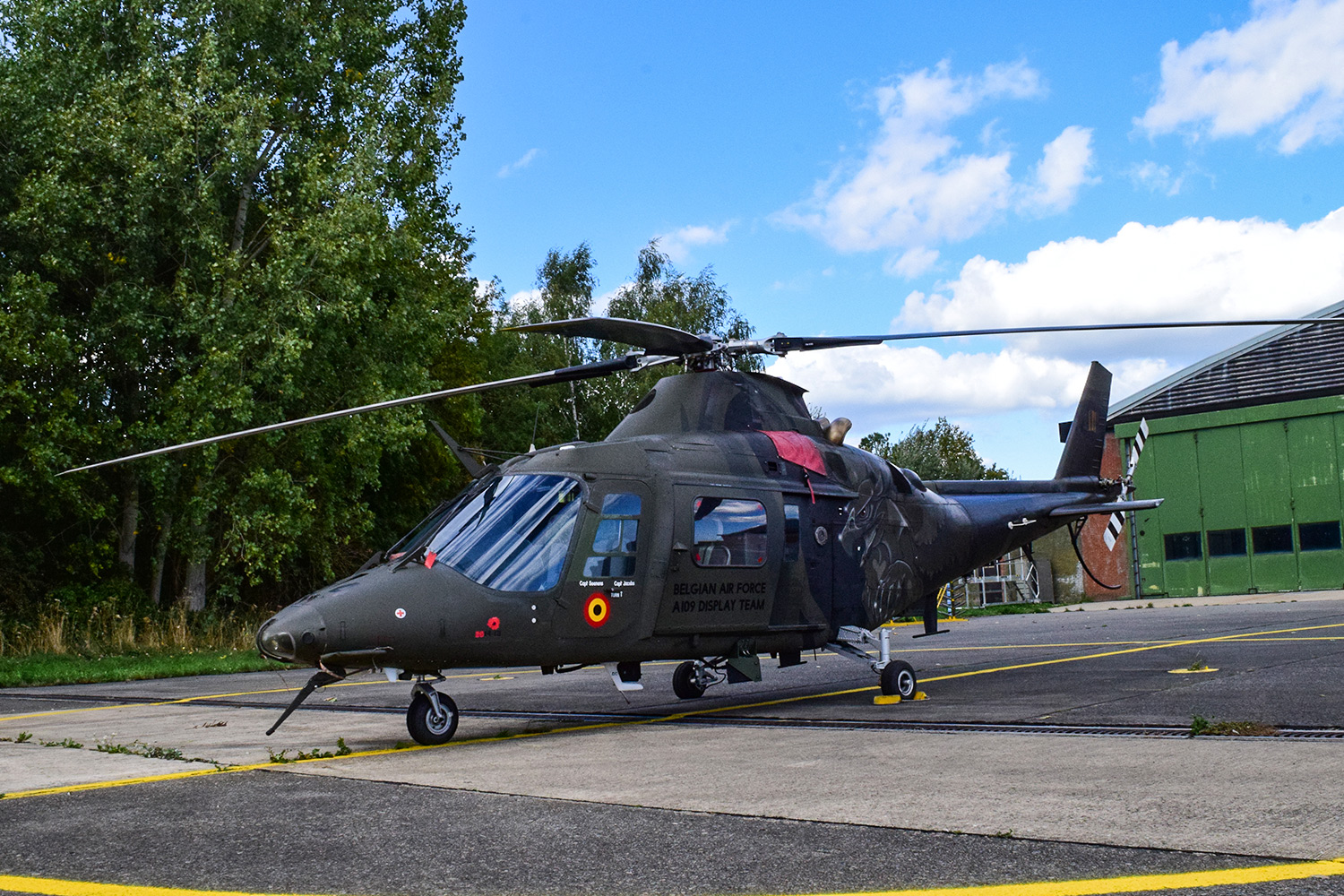 Now, let’s look at the actual Instruments & Watches in use.

That’s a whole load of bells & whistles let me tell you! Let me begin with this: Pilots wear watches for pleasure just like the rest of us, it is not part of their mandatory gear as it’s all covered on board.

While not mandatory (you have one in the cockpit as you’ll see below) I understood it is in fact good to have one to hack time during briefing. The more modern way to time is to use GPS time.  Let me spare you the wikipedia search: “GPS time is not corrected to match the rotation of the Earth, so it does not contain leap seconds or other corrections that are periodically added to UTC. The lack of corrections means that GPS time remains at a constant offset with International Atomic Time (TAI) (TAI − GPS = 19 seconds) […] GPS time is theoretically accurate to about 14 nanoseconds”

The above picture is of course strikingly similar with Pilot watches out there, in particular with B&R, which is no accident. It also so happens that B&R has in the past released a limited edition B&R (99 pieces) for the Belgian Air Force. And you guessed it, there was one in the collection of our host.

Looking around the cockpit, what is the most obvious when sitting there in full sunlight, is that all the instruments are extremely legible. What also struck me were the colors used, they aren’t exactly fluorescent, nor are they shiny or matte, they’re just perfectly bright and crisp unlike anything I’ve seen before. Someone needs to put this on a watch dial:

Another watch brand that could be found on the wrists is a fan favorite, Sinn. Amongst them, there was an interesting oldschool Bell & Ross ‘By Sinn’: 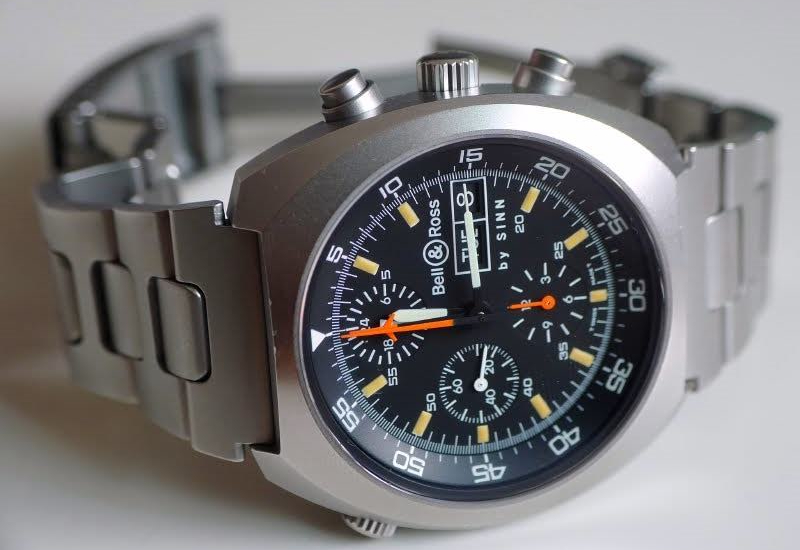 In the beginning B&R did indeed not manufacture their own watches, they were Sinn produced with B&R branding. Not pictured is the case back, but take it from me that it is 100% Sinn leaving no doubt they were the producer indeed. As you will note also, the styling is very far from what B&R is most known for today.

Another watch that you will find on the wrists of Belgian Air Force pilots (and other Squadrons beyond the Belgian Borders) is the Gavox Squadron:

Gavox, a Belgian microbrand, is the supplier of a growing number of Air Force Squadrons flying the skies above us. As you can tell, it has that same “instrument” DNA that you find in the cockpit. Each Squadron also tends to personalize their series of watches (by for example customizing the subdials): 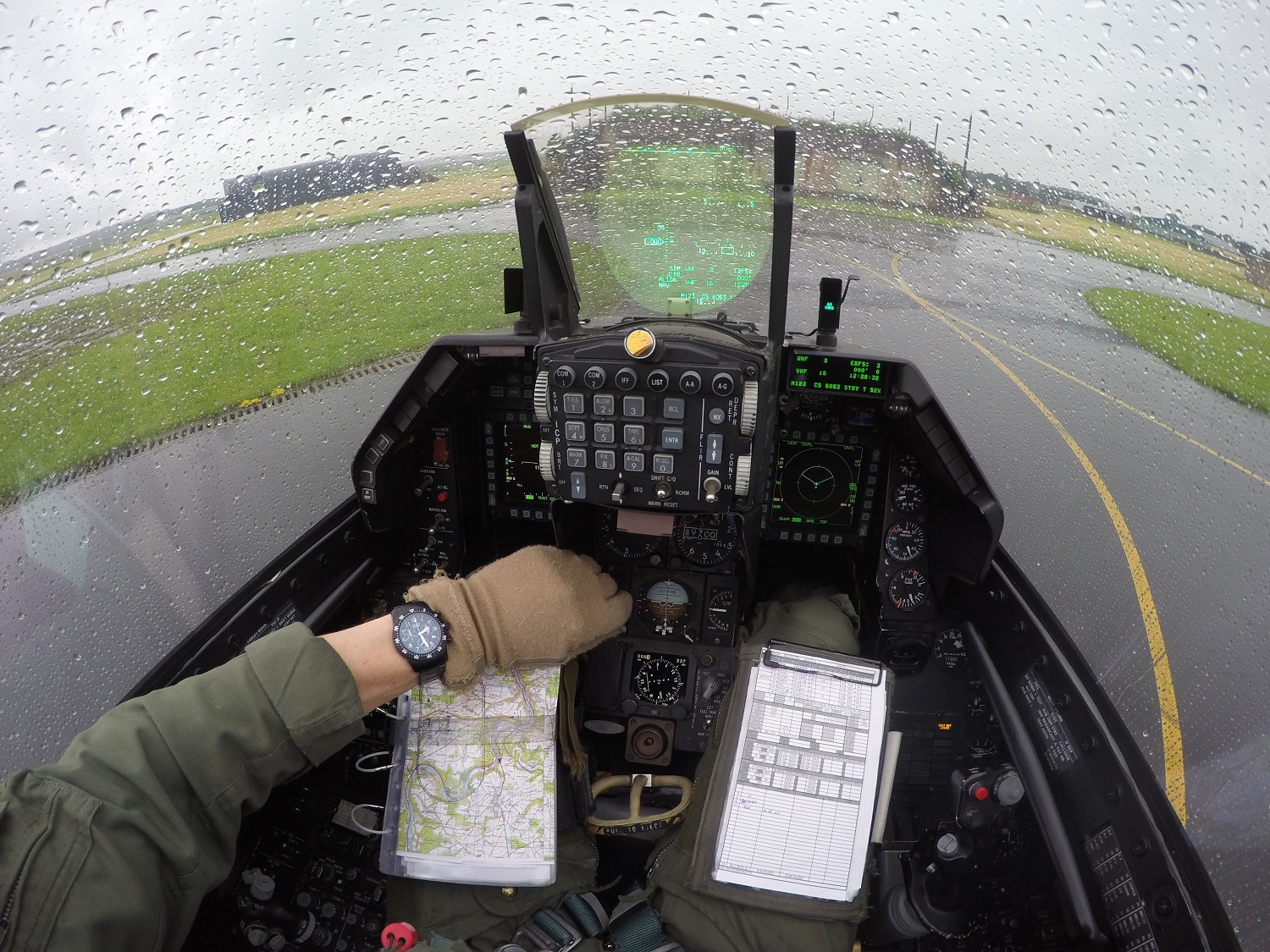 Despite all the high tech that is packed in these helicopters, there is a centrally located analog chronographChronograph A chronograph complication is a feature in a watch that allows the wearer to measure elapsed time in addition to telling the time. It works by having a separate set of gears and levers, called the chronograph mechanism, which is activated by pressing a button or a pusher. The chronograph mechanism starts and stops the chronograph's second hand, which is usually located on the watch's dial, separate from the regular watch hands. The elapsed time is usually displayed on a sub-dial or a register on the watch's dial. [Learn More] right there on the dash:

Another watch which never disappoints is the Omega Speedmaster. And it could also be found on the wrists on-site. I also understood it was on the wish-list of one or two Pilots. I’m not sure if my visit helped cool that need to get one 😉 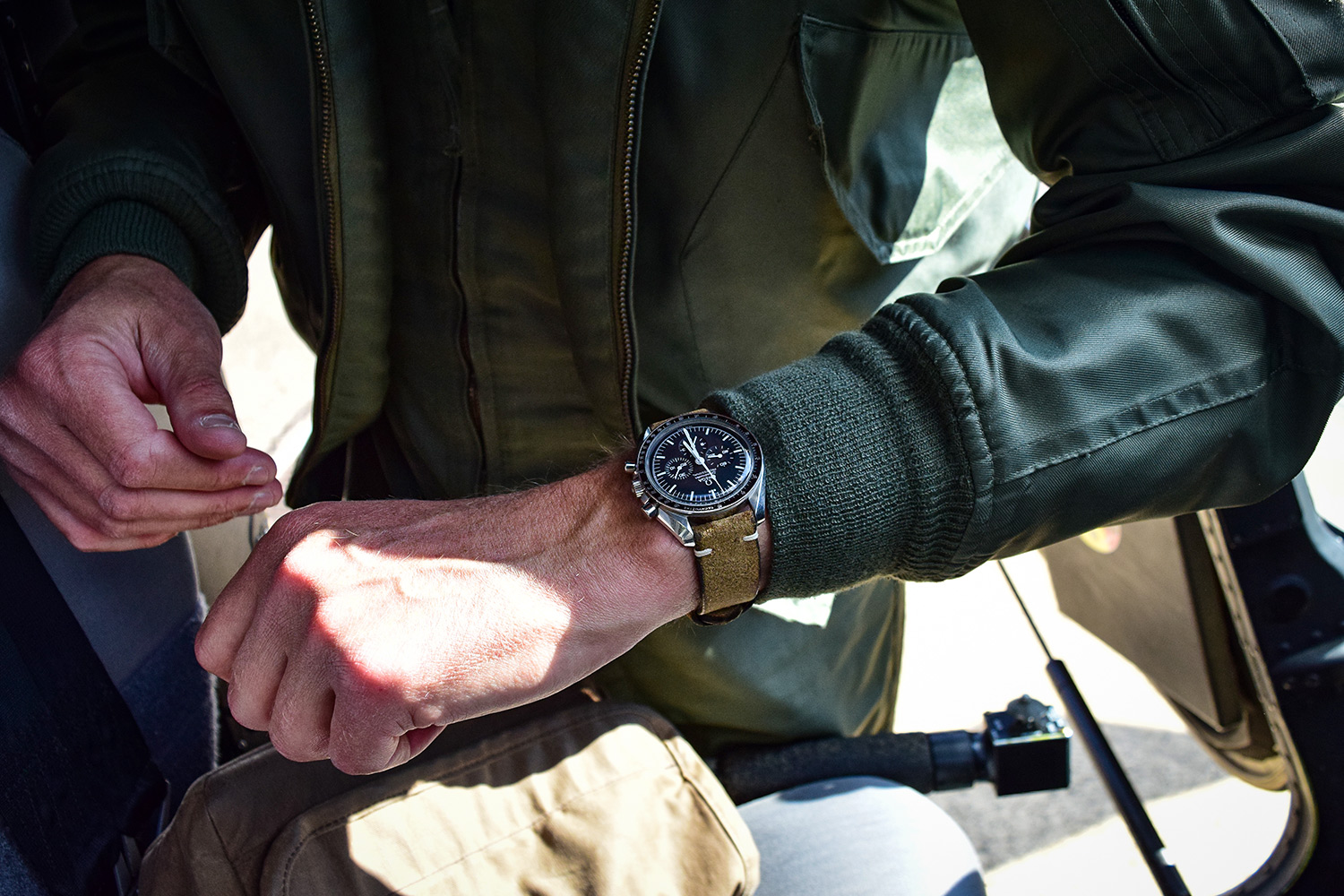 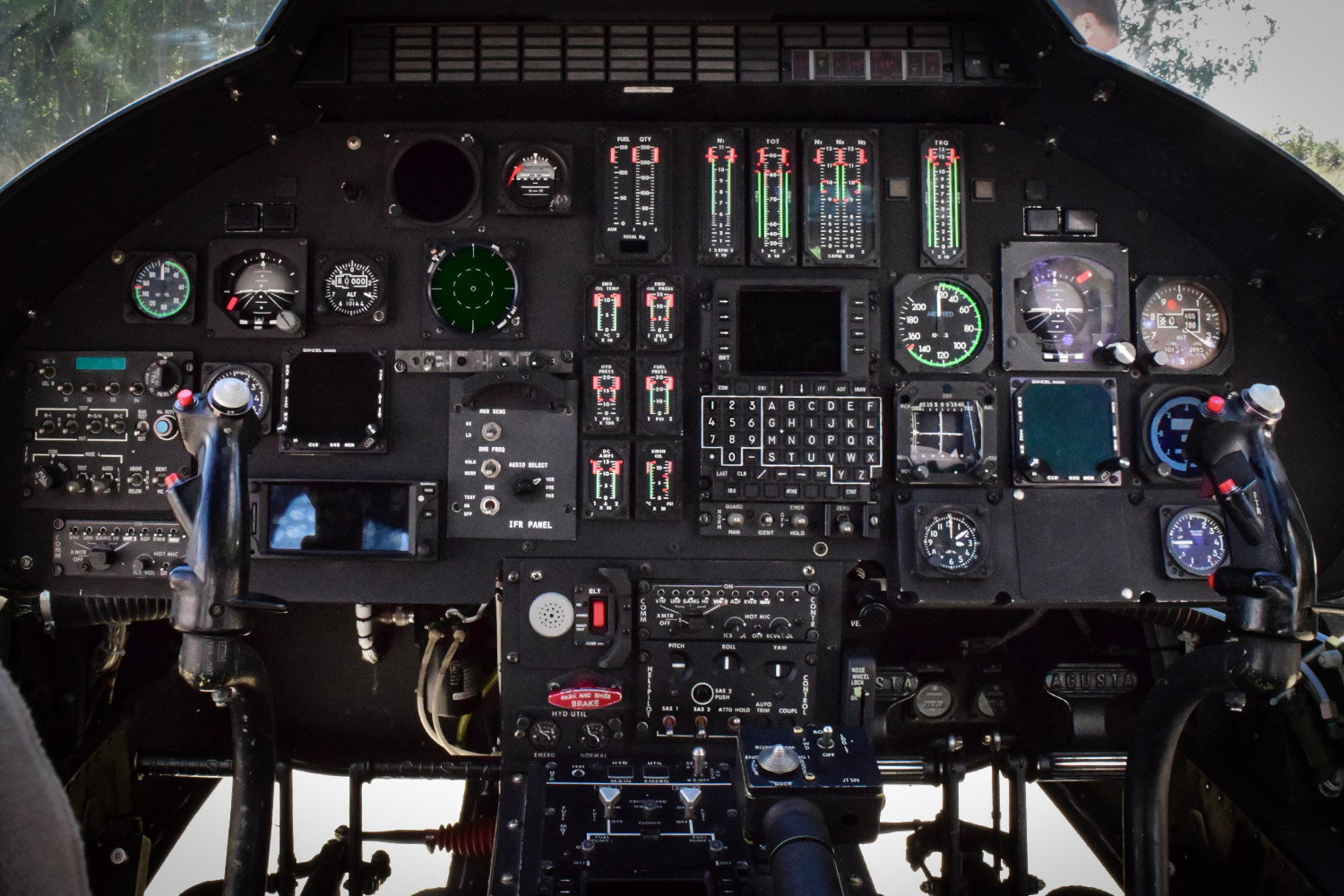 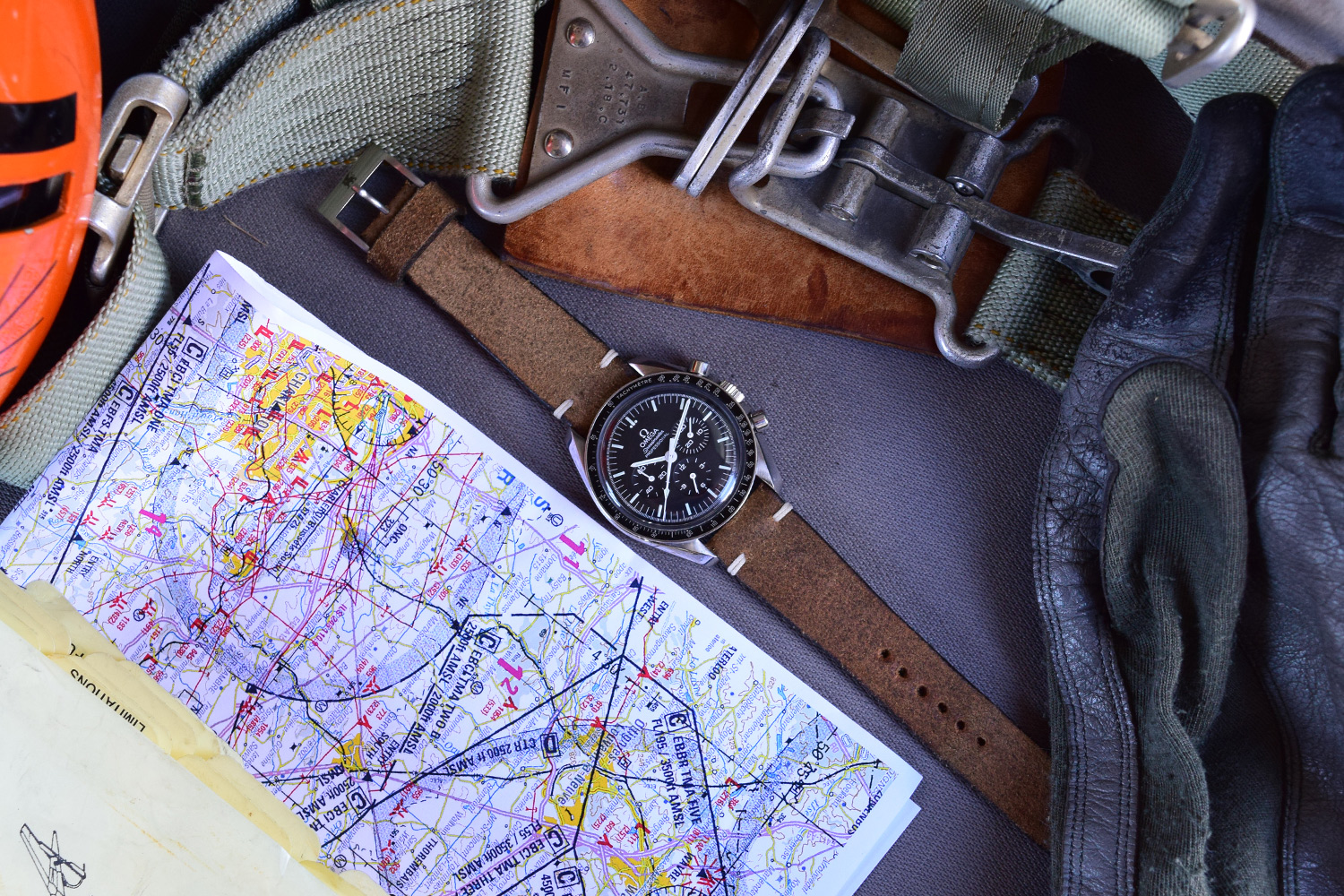 For anyone who cares to know, the handiest strap of the day, no surprise here, was without a doubt the NATO strap. It nicely fit over the suit & gloves.

So at the end of the day, it turns out, Pilots wear watches for much the same reasons we do: For pleasure! 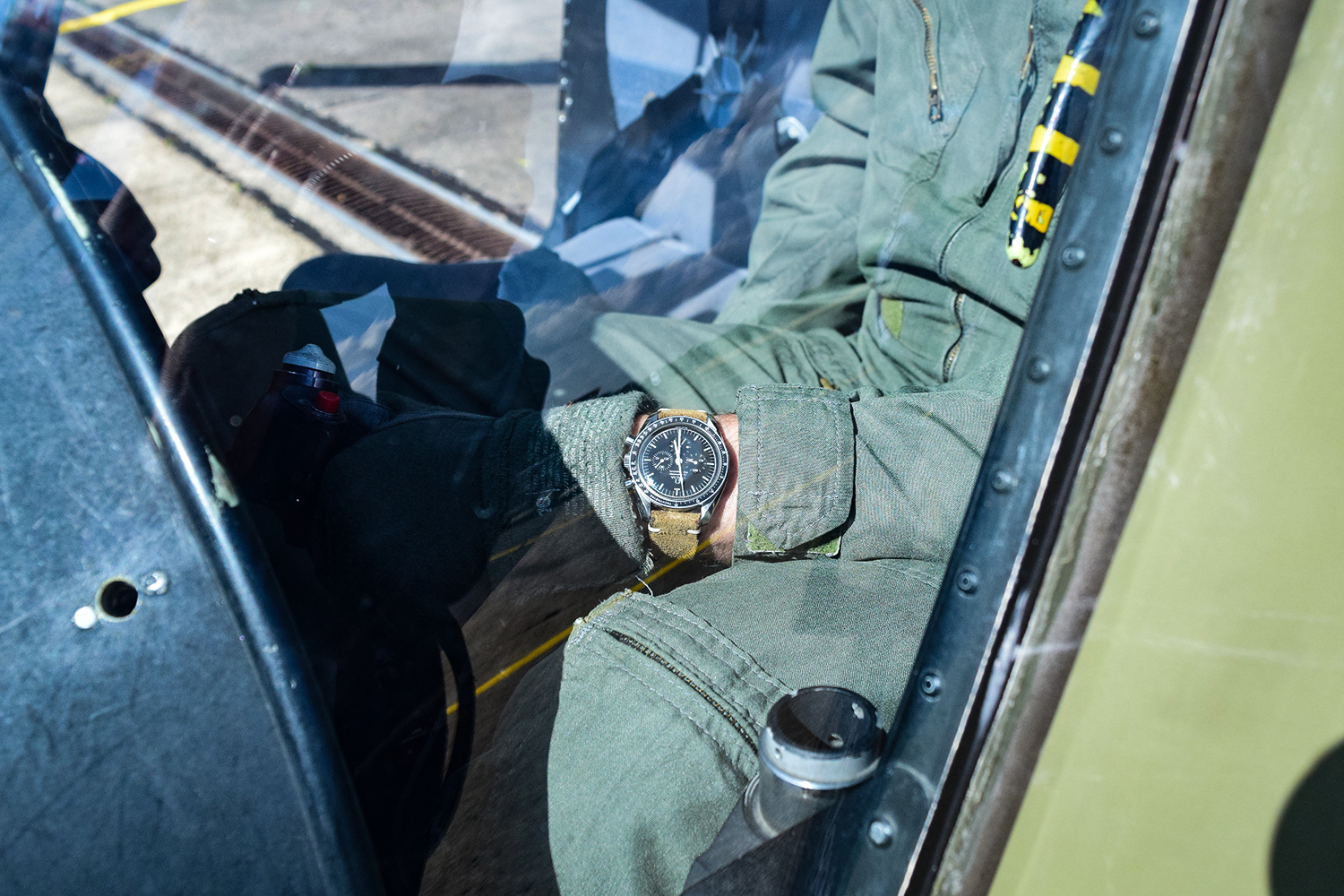 A thousand thanks to the Griffons for the warm and most memorable welcome. It was an absolute pleasure. 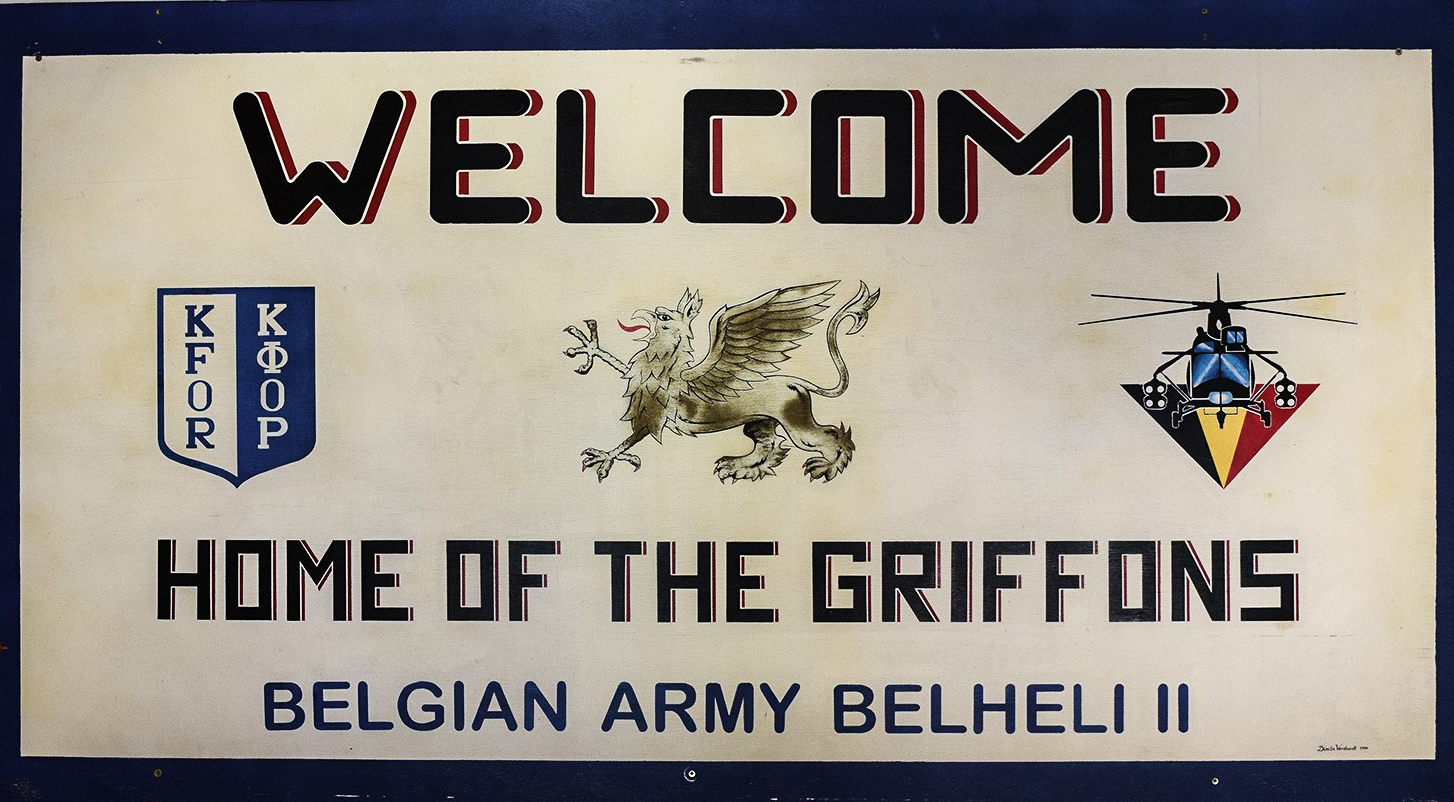