Looking to buy a Rolex Explorer I? We’ve got you covered with our buyer’s guide.Below a recap of my observations when looking into the different models, as I was pondering which one (if any) to grab. By no means a review of any of the models, purely some key points which could be useful should you be looking into getting yourself an Explorer. Make sure to check out our video overview of the latest 214270 while you’re here.

Any analysis of the Explorer starts with a reference to Sir Edmund Hillary climbing Mount Everest. Legend has it, he was wearing the Rolex Explorer when he completed his climb. That doesn’t seem to be quite what happened in reality, however this has proven to be marketing gold for Rolex much the same as the Moonlanding was for Omega and the Speedmaster Professional.

His sherpa, Tenzing Norgay, was probably wearing one. However, his ‘Explorer’ didn’t look anything like what we now know as the Explorer model and nor was it called an Explorer at the time…

It is mostly refered to as the ‘Pre-Explorer’ for this reason. To be clear, Hillary and Norgay’s Explorer was an Oyster Perpetual. This pre-explorer was given by Rolex to Hillary & other adventurers back in the day for extensive field testing. Afterwards the watches were handed back in so Rolex could assess how the watch weathered these most brutal of conditions. Below we explore the different variations in chronological order from the moment the ‘Explorer’ actually appears on the map.

First reference on which you’ll find the word ‘Explorer’ on the dial. Launched in the same year that Hillary & Norgay peaked Mount Everest. Notice how similar it looks to even today’s version of the Explorer. This version has a gilt black dial and some (not all) of these also feature the familiar looking 3-6-9 on the dial. Pictured below you see the Mercedes hands making an appearance. The movement used is the A296.

There’s also a rare version, of this already very rare reference, with a honeycomb or guillocheGuilloche Guilloche is a decorative technique used in a.o. watchmaking, it is an engraving process that creates intricate patterns on the dials and other parts of the watch. It is done by using a rose engine, a specialized lathe with a variety of interchangeable cam-driven patterns. The patterns are created by the movement of the machine's cutting tool over the surface of the metal. Guilloche is considered to be a traditional and labor-intensive technique, it requires a high level of skill and experience to produce good consistent results. [Learn More] dial; pretty much the Grail when it comes to vintage explorers. Note also how the watch pictured below does not feature the mercedes hand, this is normal as they seem to have been released with both styles of hands (pencil hands & mercedes hands)

A pure collector’s watch and it is a good-looking and iconic piece. Would I like to have one in my collection? Of course. Would I be able to authenticate the watch? Highly unlikely. Do I want to wear one as my only watch? Absolutely not.

Key takeaway: Collectible with a touch of Radium.

Highly sought after by collectors. CaliberCaliber The caliber ('movement') is the heart and engine of a watch. It consists of a number of interconnected components that work together. Energy is transmitted through the gear train, to the escapement mechanism. The escapement mechanism releases this energy in a controlled manner. This drives the gear train, which ultimately rotates the hands of the watch and keeps time. [More Info] 1030 under the hood, the familiar 36mm diameter and waterproof up to 50m. It has that old fashioned black lacquer dial and if all is well it’ll have patina hands as well which back then were lumed with Radium. 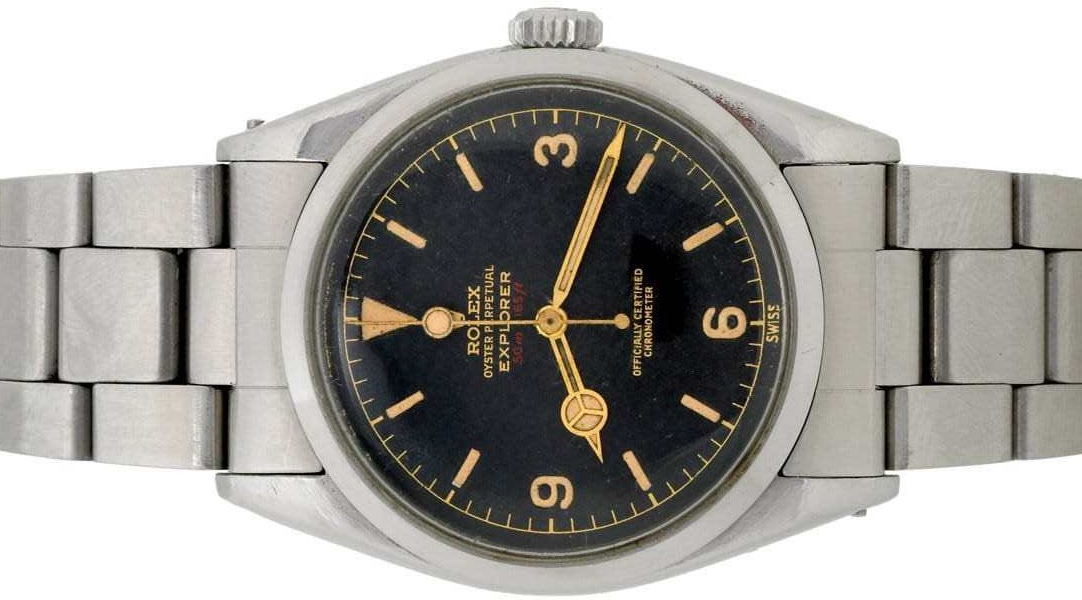 Buyer beware, bring a loupe in case you want to buy one of these. A great watch to add to any collection, although to me not suited for a daily wearer and certainly not for a ‘one watch’ collection.

Released shortly after the 6610, and also a very nice looking vintage piece if you can find one that hasn’t been polished to oblivion or had all its parts replaced over time. It’s certainly possible to find one of these though, as it has been produced from 63 all the way up to 89. Here the Caliber is the 1560 movement. Mid-lifecycle the movement was upgraded to the Calibre 1570. Case is still 36mm diameter, still plexi glass, and now waterproof up to 100 meters. The dial is a matte black and gone are the days of Radium, here you’re looking at Tritium instead. 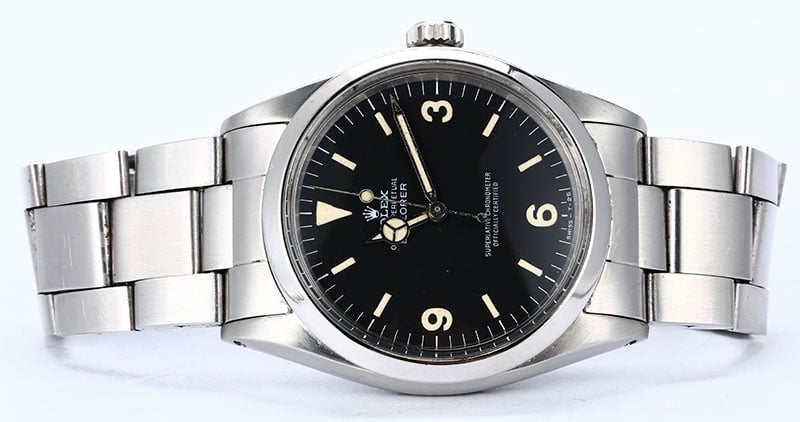 Now, if you’re really into a vintage explorer, I would nudge you towards the 6610, it’ll give you more bragging rights 😉 The 1016 is of course also a great vintage piece to own, do expect to pay that good ole’ vintage premium for the 1016.

Key takeaway: The birth of the modern explorer?

I’d consider this the start of the ‘modern’ explorer as we know it today. It sees the introduction of sapphire crystal, lacquered dial, applied indices and a new Calibre 3000. It is the first in the line-up that I could consider as a daily (and only) wearer as this is easily serviced and it has a contemporary yet timeless look. At first glance, it still looks remarkably similar to both the 1953 Explorer and the 2016 Explorer (more on that below). 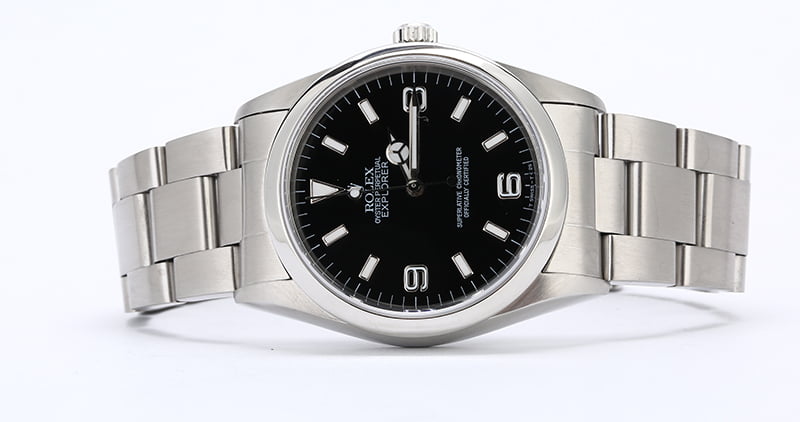 Virtually identical to the 14270. The only notable change is that the bracelet has received solid end links for this reference and the Calibre is 3130. It is often mentioned online that the other change is the space of the springbar holes in the case, making this one more difficult to find a strap for. In my personal testing, I saw this same challenge for both the ref 14270 and the ref 114270 (and also the References that follow). 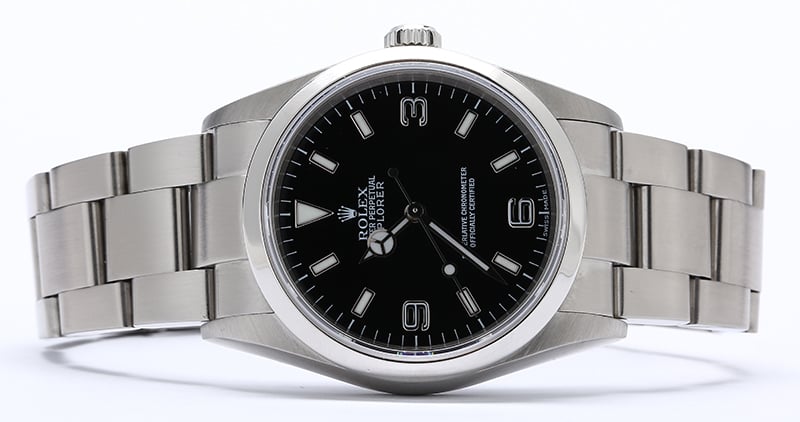 Other than the end links & calibre, there’s no difference between either the 14270 or the 114270. Hold both in one hand, you wouldn’t be able to tell the difference visually.

The introduction of the 214279 reference was absolute horological blasphemy for some, and a much needed update for many. Indeed, it was no longer a 36mm watch but a 39mm! And oh what a difference 3mm makes…  What they didn’t do however, was increase the size of the hands. This received quite a bit of negative feedback as they seemed a bit out of proportion with the rest of the case. I tend to agree, but this is a matter of taste of course. The case also changed to the new ‘maxi case’ with most noticeable wider lugs making it an overall more sporty & modern watch. A visible cue that you’re dealing with the 214270 and not the 114270 is that the word ‘Explorer’ moved down on the dial.

A small thought: As this was a rather controversial piece and in production for a very short time, perhaps this is a future collector’s item?

Key takeaway: Update to the dial & hands and loads of lume.

The evolution of the Mark 1 and what I can imagine to be the design that’ll stay in place for the next 20 years, it is an overall solid Explorer. Easiest to notice the difference with the Mark 1 is the now lumed 3-6-9 numerals and the bigger hands. Gone are the smaller hands, gone are the full white gold markers. I’d say it’s pretty much perfect at this point? It would be great if they also made it in the 36mm size, I wouldn’t count on that happening anytime soon though…

Other than that the watch is exactly the same as the Mark 1. Note that Rolex didn’t even change the reference number of this model. The Mark 1 and Mark 2 designations are purely terms used by the watch crowd and not at all by Rolex itself. For a detailed look at the 214270 have a look at our detailed video overview

Note that the Speedmaster is quite a bit larger than the 39mm and it is much larger than the 36mm. In addition, both the 36mm and 39mm are very flat watches, especially when comparing to the Speedmaster (which is no thin watch, but not very fat either compared to today’s watches). The 39mm has a substantial weight to it, the 36mm with its hollow links feels very light in comparison, almost… too light?

Finally, the dial is much crisper on the new 39mm than it is on the 36mm, at least this is my impression. Keep in mind that both the 36 and 39 will look smaller when worn on a leather strap.

There you go! I hope this write-up helps those of you out there on the hunt for an Explorer 1. Whichever model you end up choosing, you can’t really go wrong with any. If it’ll be a daily wearer and perhaps your only watch (shivers!), I personally wouldn’t look beyond the 14270 purely from a practical point of view… Up to you now.

NOTE: Lightbox pictures of the Explorer 6610, 1016, 14270, 114270 courtesy of bobswatches.com. The fantastic mountain-range picture is credited to alpine-photography.com