We tried to look at the Wilsdorf Foundation, which is about as easy as looking at a Penguin and feeling angry (very difficult). Another ‘Backstage’ where we like to shed a light on the men and women who work tirelessly behind the scenes of the watch industry.

The Wilsdorf Foundation was created in 1945 by Hans Wilsdorf. Hans Wilsdorf, was a German watchmaker and the founder of Rolex and Tudor. The foundation owns Rolex and Tudor. It is effectively run just the same as a charity. Does this mean that a purchase of a Rolex counts as a charitable donation and warrants a deduction on your annual tax statement? No it doesn’t. Does this mean that it is recognized by the Swiss government as  a charitable trust, and thus, pays no corporate taxes? Yes, it does.

The overall goal of the foundation is to keep Rolex (& Tudor) running smoothly and to support a variety of philanthropic endeavors.

The foundation invests in major real estate projects, grants scholarships, supports associations active in the social & cultural sector and it also finances other foundations. As per the Tribune de Genève in their 2018 coverage of the most powerful players in Geneva: “its field of action is extremely vast and varied. A simple structure of about ten people responds quickly and without much formalities to nearly 4,000 requests per year.”

The foundation is under management of not managers but trustees. The kicker of course, is that due to their legal form, they have to disclose exactly nothing to the public and they don’t have to chase any Quarterly earnings reports. That is 5 Billion of annual revenue, tumbling around and it’s everyone’s best guess as to what happens with all of it.

How much did you say?

Five Billion. Or at least that’s the best guess of the analysts that are paid to make that estimate. But how does one put a number on revenue if you have no view on units sold? Well, one of the ways it is done is to look at data published by the Contrôle Officiel Suisse des Chronomètres (COSC). They (used to) publish very handy and granular data where you could see exactly how many COSC certificates the institute issued per brand. This institute is not owned by the Foundation, it is an independent Swiss institute. As Rolex is huge on chronometers (they eat up over 45% of the COSC certificates issued every year), this has gives the analysts a bit of magic dust to provide us an estimate on Rolex’s annual revenue. Let’s have a quick look here:

Up to 2015 we can clearly see that Rolex truly reigns supreme, unfortunately COSC no longer publishes by Brand name as per 2016. This happened to be a not very great year for the industry, which you can also see as there’s a dip in total COSC certificates issued in 2016. Rumor has it that one of the bigger ‘losers’ for lack of better word, was at the source of the request to no longer publish the brand-specific data as their drop in numbers would be made a little bit too apparent. Let’s assume that Rolex however, continues to eat up approx 45% of that total. Approximately 800.000 watches per year.

A very nice detail, which again unfortunately as of 2016 we can’t view in more detail, are  the Tudor numbers, they came back with some serious chronometric vengeance as can be seen here: 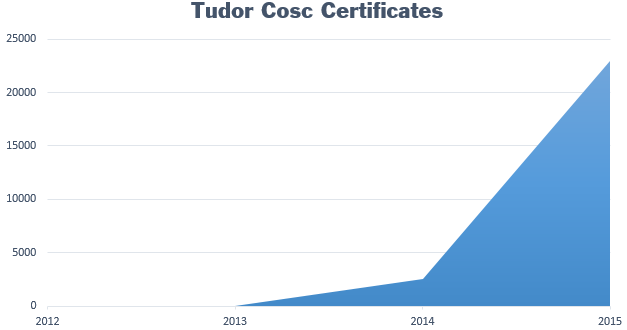 What happens with all that money?

As touched upon above, word on the street is that the money that is made is used to cover costs and the rest is reinvested in the company to make sure Rolex and Tudor’s reign continues ad infinitum. A certain part is given to a set of charities. The ‘Fondation Hans Wilsdorf’ does indeed pop up in a lot of third party documents where they are listed as donors, and the amounts are most definitely substantial to say the least. What the proportions and amounts are will remain a mystery. When asked about the size of its charitable donations or revenue, Rolex simply declines to answer.

A quick note on the band members

A quick rundown of the main band members is as follows:

So there you have it, The Wilsdorf Foundation, a charity that happens to make very fine watches indeed! 😉