As they say in the watch world: Ain’t no edition, like a limited edition! Limited to 100 pieces, Lange has wooed the crowd at this year’s SIHH with giving their revered Datograph a salmon makeover. Let’s see what all the fuss was about. 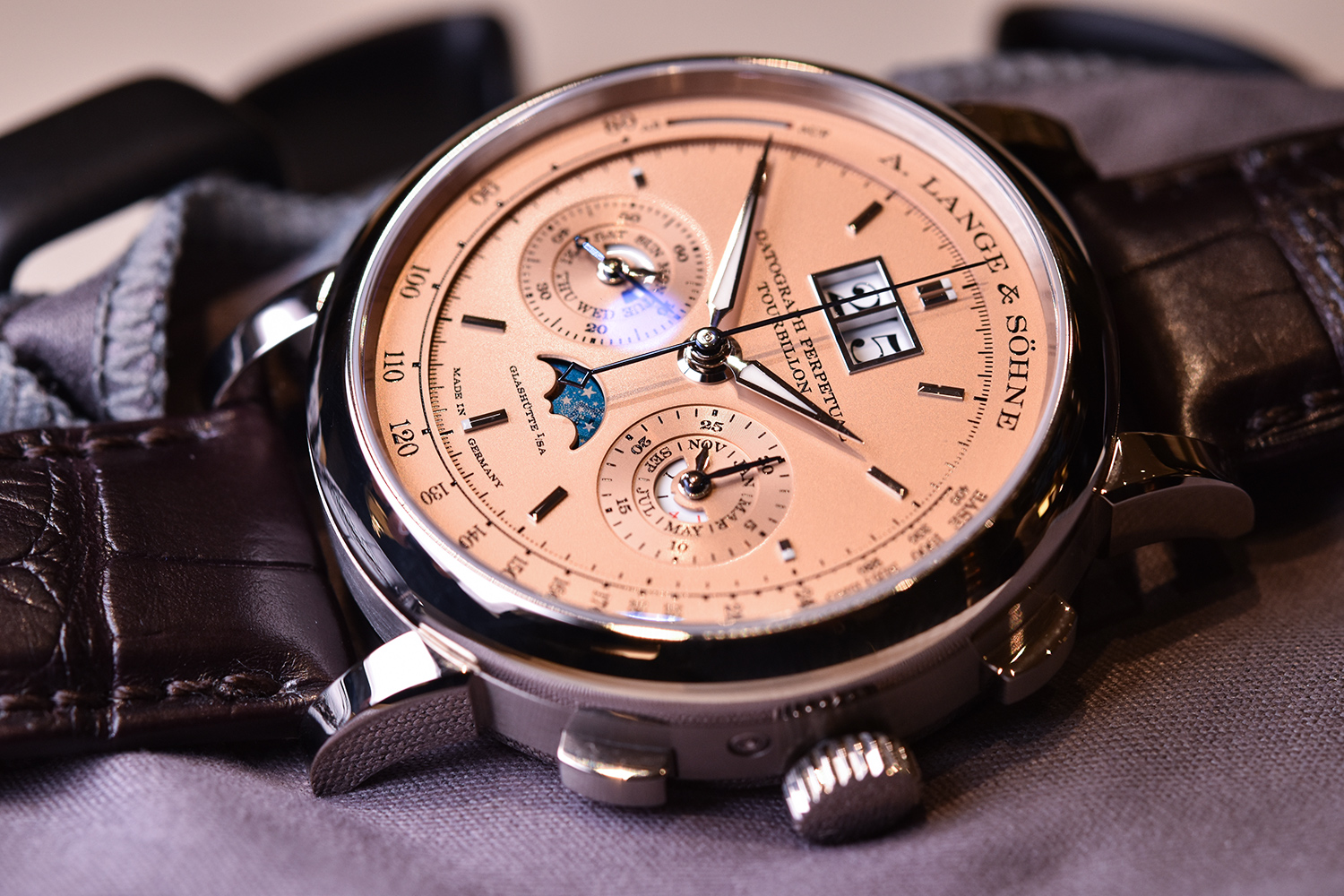 For example, at our previously organized Master Class in Haute Horlogerie, we were presented with a beautiful Patek Gondolo. A highly complicated and beautiful watch, yet of of all things on display  it was the salmon dial which was the most discussed feature of this impressive piece:

Looking at this release by Lange, ignoring the salmon dial, this is very much the same watch as the Datograph Perpetual TourbillonTourbillon A tourbillon is a complication in a mechanical watch that is designed to improve the accuracy of the watch by compensating for the effects of gravity on the balance wheel and escapement. It consists of a rotating cage that holds the balance wheel and escapement, which rotates on its own axis once per minute. This rotation helps to average out the positional errors caused by gravity, making the watch more accurate [Learn More] which was released in 2016. That is to say, it’s one heck of a complicated watch, and one of A. Lange & Söhne’s most complex watches.  While Salmon dials may be nothing new to the watch world, they are certainly new to A. Lange & Söhne as far as I can tell. And Lange being all… Lange, well they went all the way by making the dial from solid pink gold. There’s no layers of color added to the dial, it’s pure and solid gold with just the right tone to mimic the salmon dial effect. Visually speaking, it’s easy to see why going the extra Lange mile was worth it, the resulting is striking. 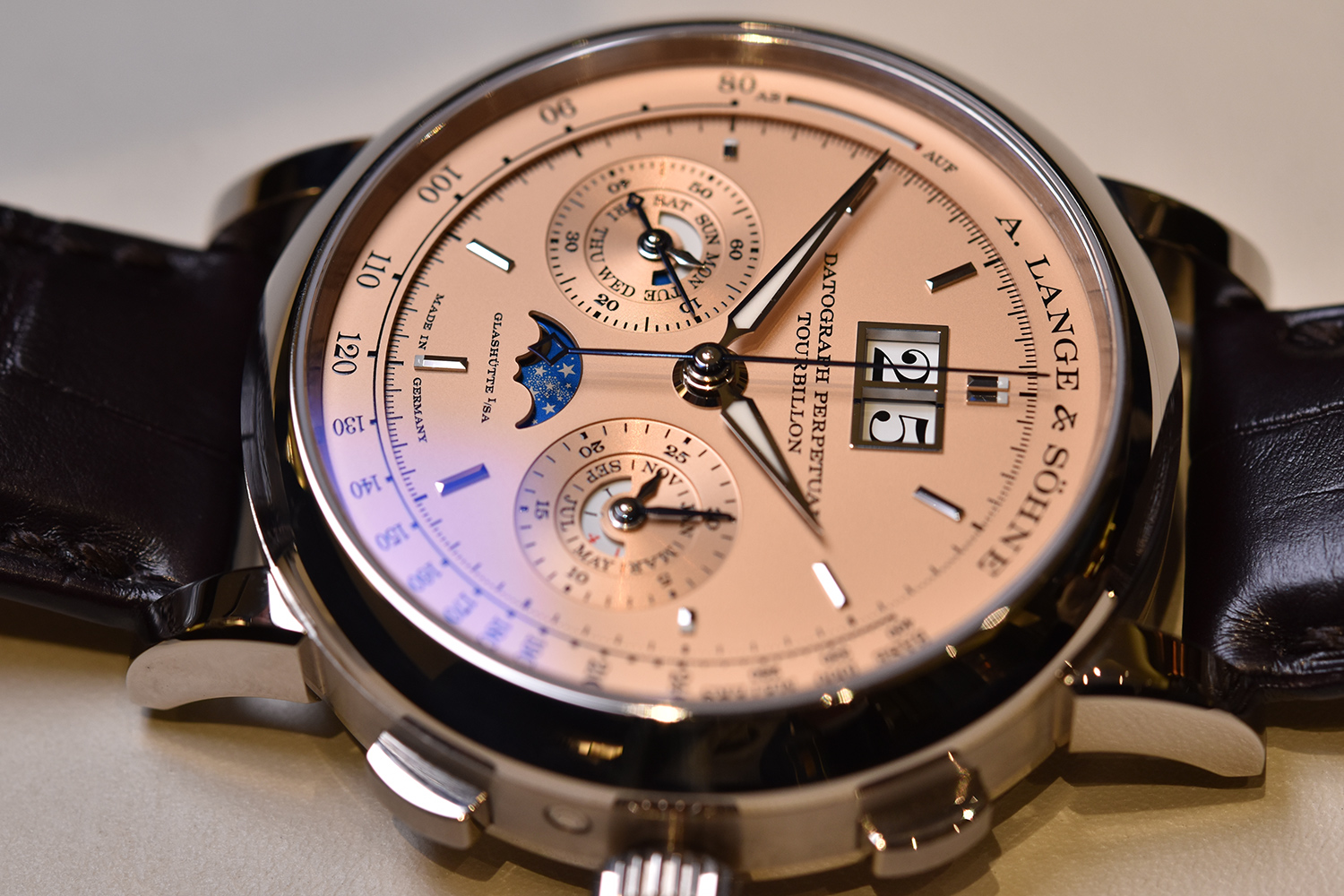 Actually, I think I oversimplified. It’s not just the dial that is different from the previous version. Whereas the 2016 model had a platinum case, the 2019 Limited Edition now has a solid white gold case. And I have to say, the white gold which has a warmer hue than platinum works perfectly with the warmer tones of the succulent salmon dial. 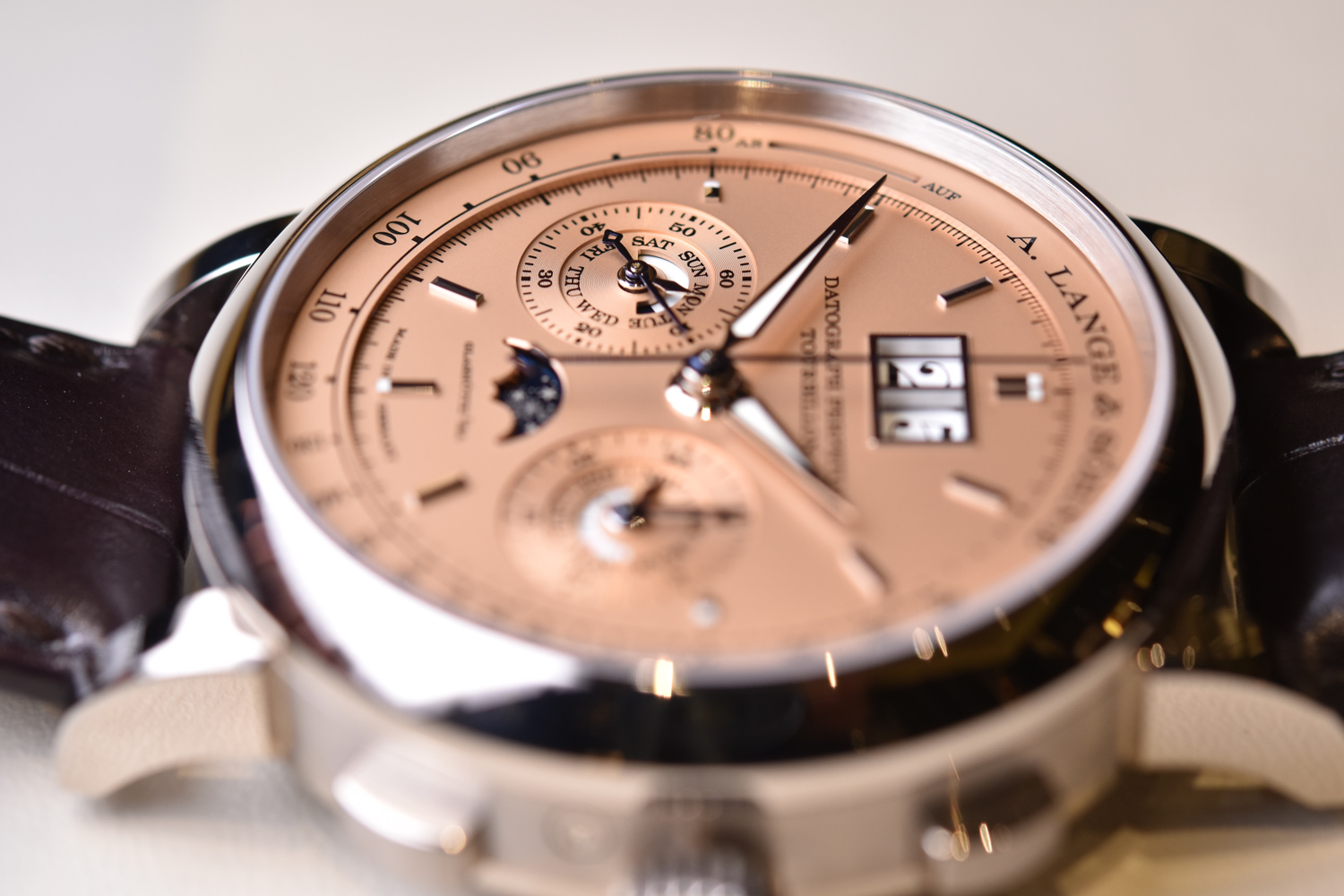 The official product page on A. Lange’s website mentions that “The hands are made of gold and blued steel. The hour and minute hands as well as the hour markers at 3, 6, 9, and 12 o’clock are luminous.” As far as I can tell, there is no such thing as a 3, 6, 9 and 12, and certainly no lume either. I’m assuming that’s a mistake on their website. What isn’t a mistake of course is how they have implemented the striking salmon dial and how it works with the hands & markers, c’est jolie! 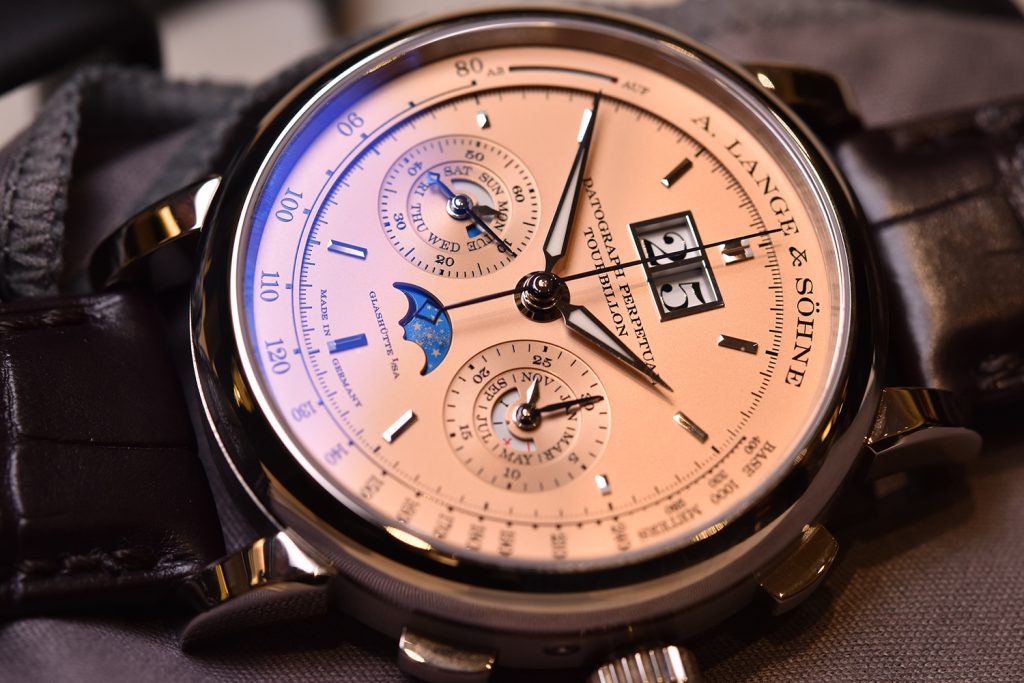 Easy to forget with this watch, when flipping the watch over the tourbillon reveals itself. The Datograph Perpetual Tourbillon is one of very few watches where the Tourbillon is invisible from the dial side. I find this a very intriguing feature, as it somehow becomes a feature that is exclusively for the eyes of the owner. A selfish indulgence for the owner to enjoy, and nobody else. Other than that, visually it works very well as well for this particular piece. Imagine if the tourbillon would in fact be visible through the dial side, the already charged face of the watch would likely lose its visual balance. With it hidden away, everything stays nicely balanced. 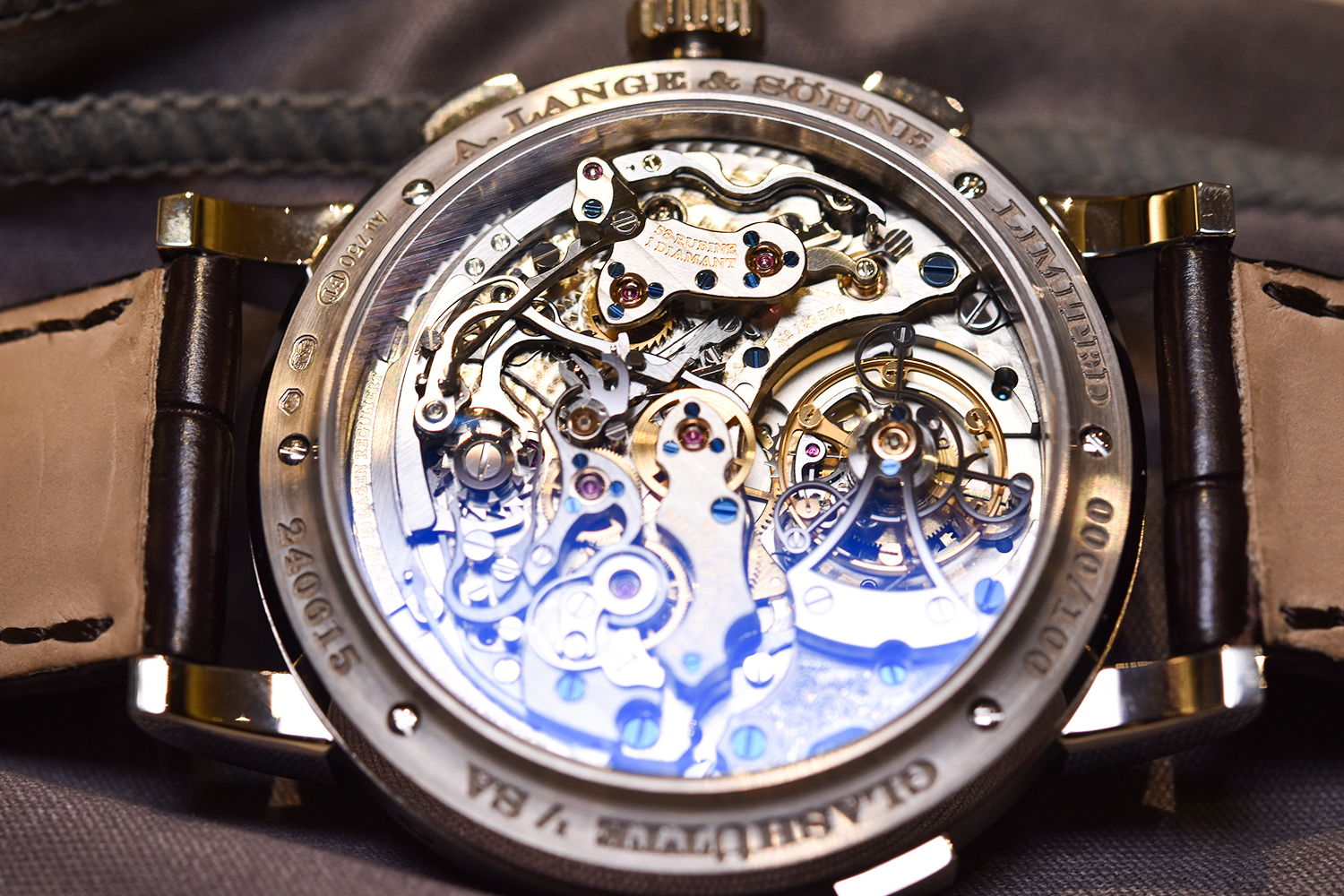 The movement is the same as that for the 2016 initial release, that is to say it is visually fantastic & technically impressive. The fact that such an array of complications fit inside a 41mm case speaks volumes as to how Lange approaches movement making.

Rather than describe you how the watch works, I’ve linked below the initial (great) video release by the men & women of A. Lange & Söhne 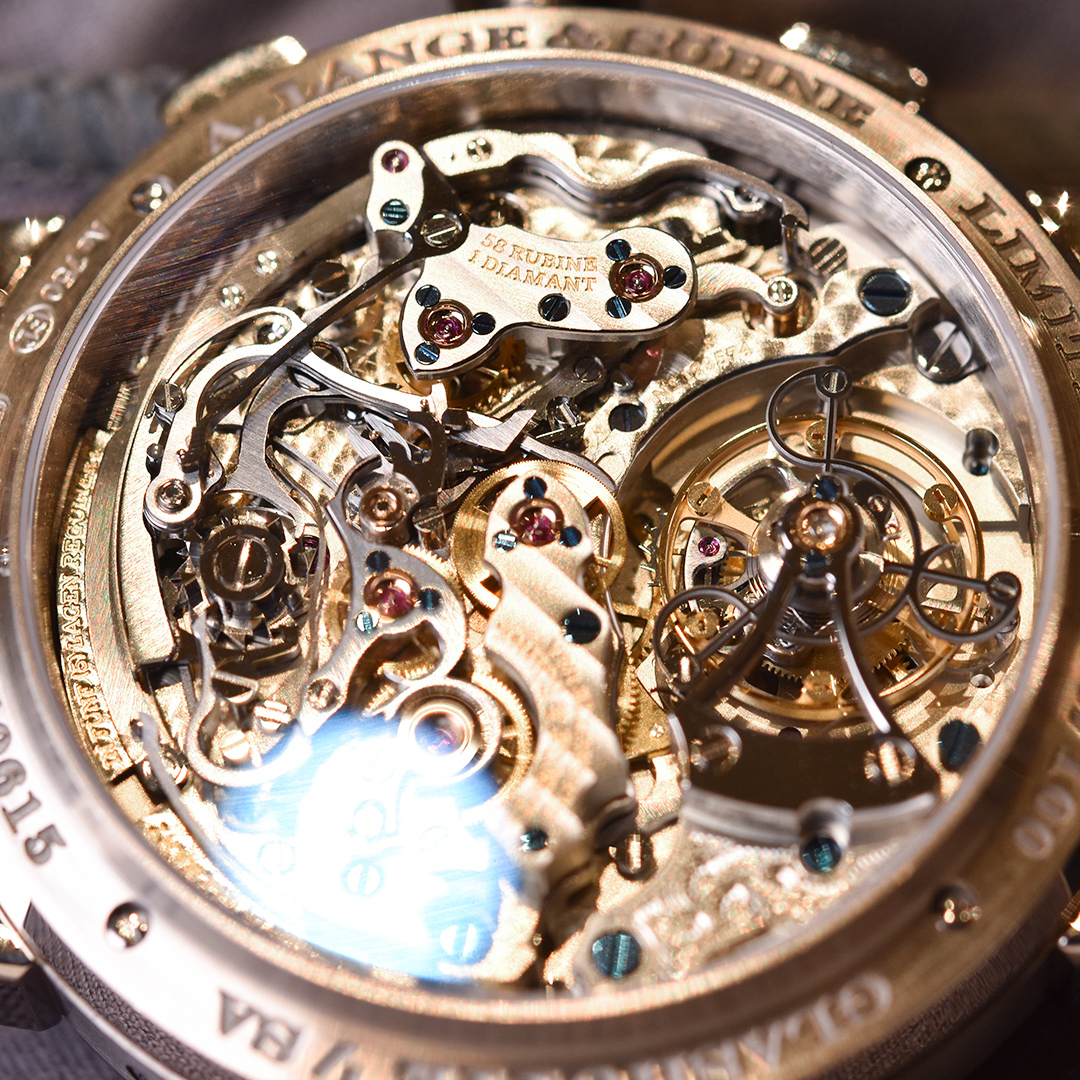