H. Moser & Cie isn’t exactly known for playing it safe. They certainly don’t shy away from shocking the industry once in a while. Say by releasing a watch made of Swiss Cheese. And at this year’s SIHH they succeeded to make a lot of noise again by releasing the ‘Nature watch’ as a means to highlight their environmental commitments for 2019.

But, these are all small potatoes compared to the latest development undertaken at the Manufacture in Neuhausen am Rheinfall. With the release of the ‘Pioneer Central Seconds Rotating Bezel’ the Manufacture makes a bold move into the unknown, and if you ask me this release is a big deal for H. Moser & Cie for reasons which I’ll get into below.

What's In A Name

Officially named the ‘Pioneer Central Seconds Rotating Bezel’. As the name suggests, this timepiece builds upon the Pioneer line. The Pioneer in itself, is a relatively new addition to the Moser line-up. It was the first ever Stainless Steel Moser watch, water-resistant to 120 meters, and essentially Moser’s take on a luxury sports watch.

With this latest variation, they have kept the same essential base elements and movement as on the classic Pioneer. Powered by the HMC200, it has a 42.8mm sculpted steel case, a fumé dial with applied indices and superluminova on all the essential bits. This release has of course been supercharged by the addition of a rotating bezel and a sporty stainless steel bracelet. Both the bracelet and rotating bezel are entirely new to the Moser-world. 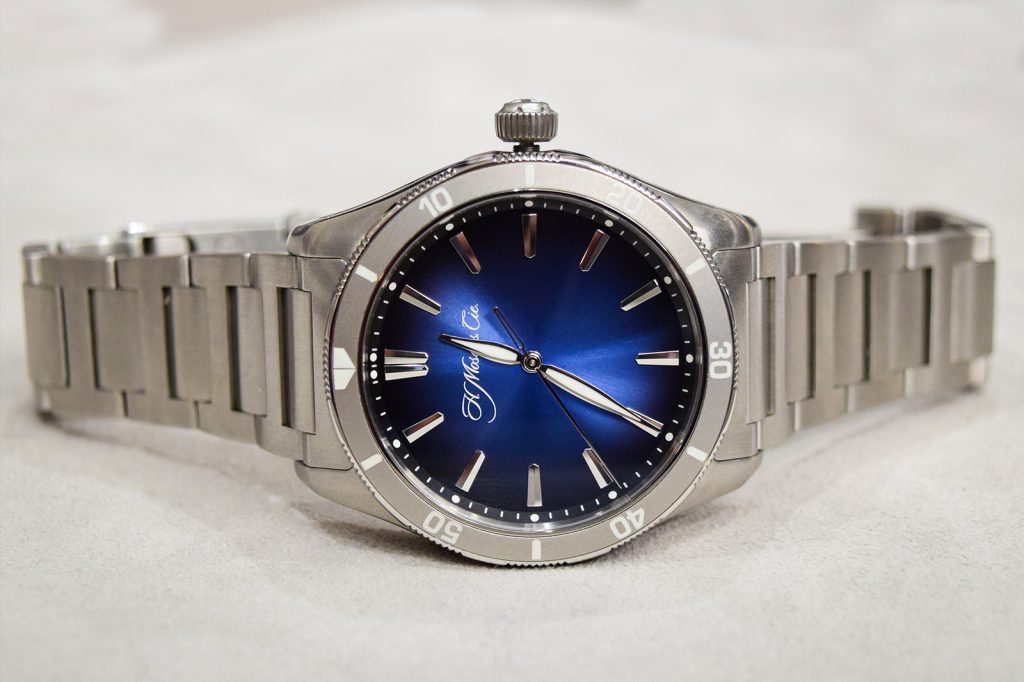 This is the first Moser watch that comes on a Steel Bracelet. How ’bout dem apples? A Moser – on a Bracelet!  It perfectly fits and visually speaking the result is that the whole is greater than the sum of its parts. A bit of a similar feeling that I get when looking at a 5711 for example. The bracelet and the case combined just make for something special.  The Steel Bracelet, which tapers from 22mm down to 19mm, does add some extra weight to this piece, which is of course to be expected. You will not forget you’re wearing a watch with this on your wrist. 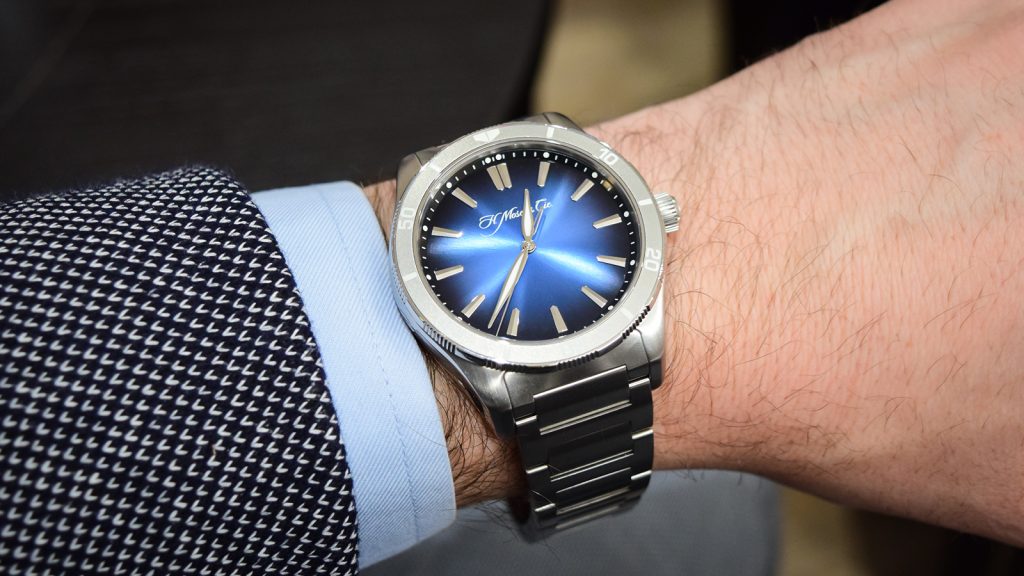 As if introducing the steel bracelet isn’t enough, this is also the first Moser watch that has a rotating bezel. And I dig it. No word yet on potential different bezel colors, but I’d guess it’s not too crazy to imagine that this could be the case in the future. The current bezel color gives the overall watch a steel-heavy look to my eye, very tool-like. I also wonder how it would look with say a dark blue bezel, or even a black bezel. This grey bezel is certainly very different from most (darker) bezels out there, which was perhaps the point. The fumé dial pops big-time as it is essentially the only color on the entire watch.

Something to mention is that despite the rotating bezel, technically speaking this watch is not an actual ‘Dive watch’. This is perhaps the reason why the watch isn’t simply called the ‘Moser Diver’. That is because it doesn’t meet the ISO6245 standard to qualify as a true dive watch. I’m not sure if that’s an issue for anyone, because I seriously doubt anyone’s going to want to take their fine piece of haute horlogerie cave diving. Your baller miles may vary. 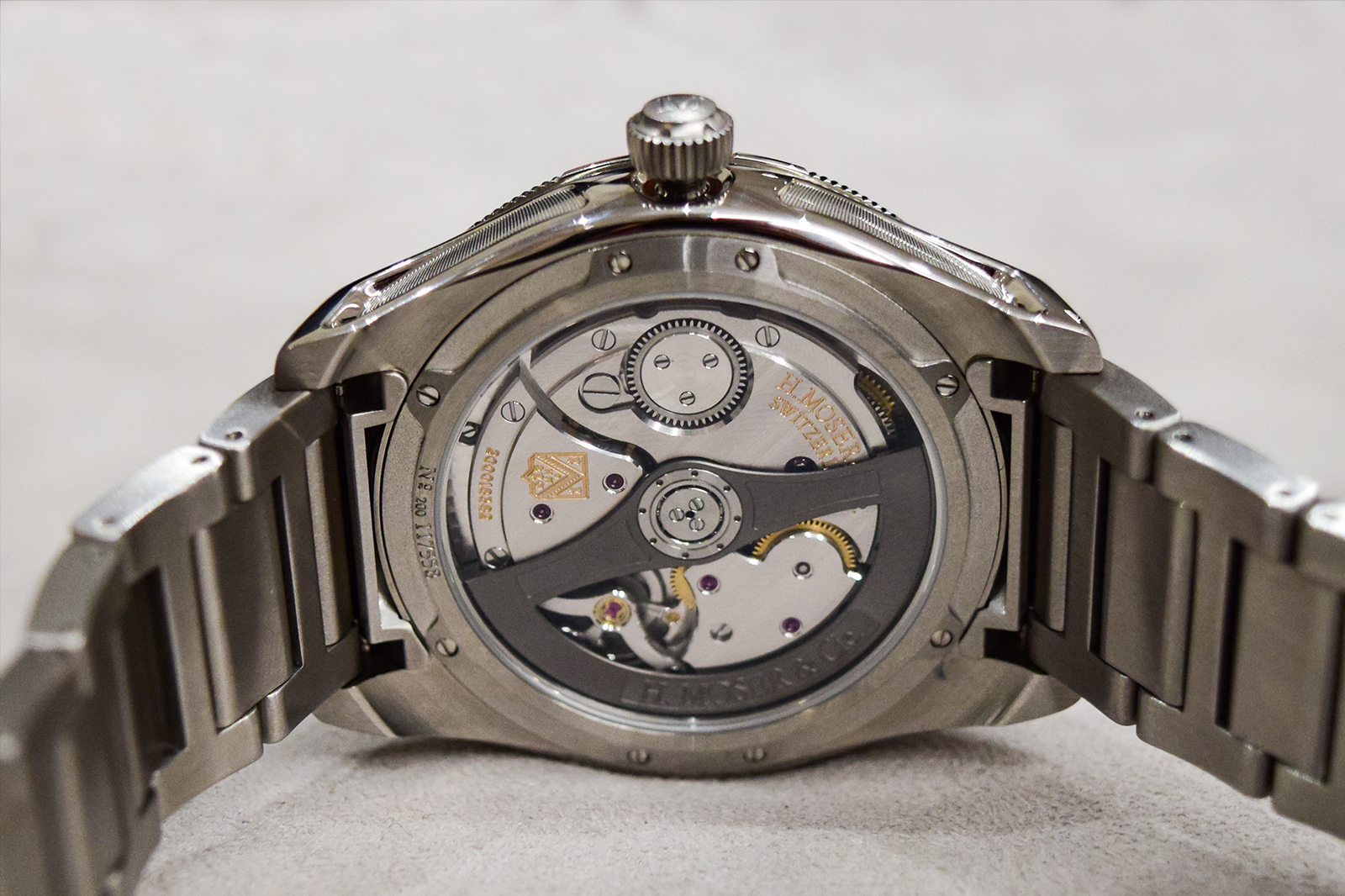 As mentioned briefly above, this Pioneer Central Seconds Rotating Bezel is powered by the HMC200 movement. Same movement as in the standard Pioneer series. As per Moser tradition, the movement is entirely designed, developed and manufactured in-house. That essentially means everything, including the regulating organ is manufactured under the same roof. To me, visually speaking, Moser calibres are always nice to look at, and so is this one. The skeletonizedSkeletonizing A decorative technique that involves removing some of the material from the movement parts to create a see-through effect, often used on the plates and bridges. [Learn More] oscillating weight contrasting against the base movement in its darker color is perhaps most visually striking. I’m not sure why more brands don’t do this, it looks fantastic. You can also see the typical Moser Geneva stripesGeneva Striping Geneva Striping is a decorative technique used in the finishing of mechanical watch movements, it's also known as "Côtes de Genève". It is a type of linear graining that involves making small, parallel lines on the surface of  movement components, such as the main plate using a specialized tool. [Learn More].  The Geneva stripes that alternate between wide and narrow.  The HMC200 is the base movement from H. Moser & Cie, and is void of more elaborate handfinishes which you’d find on Moser’s higher range (and higher priced) calibres. Still a stunner though:

While I was at SIHH near the Moser booth, I overheard someone asking “if this is still really a Moser watch”. Frankly, Moser is the young buck in the haute horlogerie world and I hope we don’t all expect them to make one and the same watch like some of the old generation haute horlogerie brands out there. Yes, it is certainly easier to not innovate, and can be quite profitable as can be seen across the watch industry. But please, let’s not encourage that behaviour. A recent ‘controversial’ release of a major brand shows us all how difficult it is to step outside one’s comfort-zone and nail it. So I very much applaud this bold move. In an ocean filled with the same old luxury divers for the past couple of decades, this adds a very nice spice to the selection. 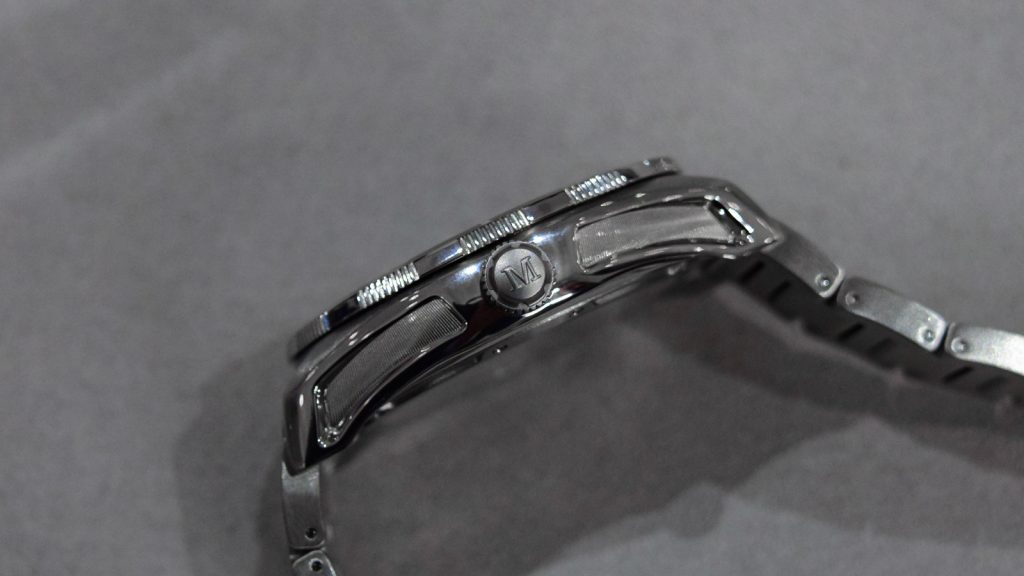 And to answer the question ‘is this still a Moser watch’, I’ll say that yes this is absolutely still a Moser watch. One look at the watch, even from a distance, is enough to tell you that. Looking closer, its Moser DNA is undeniable. The gorgeous fumé dial, that face with the lavish leafy hands, packed in that boldly sculpted case and of course powered by a Moser in-house movement. This is one seriously good-looking Moser watch. 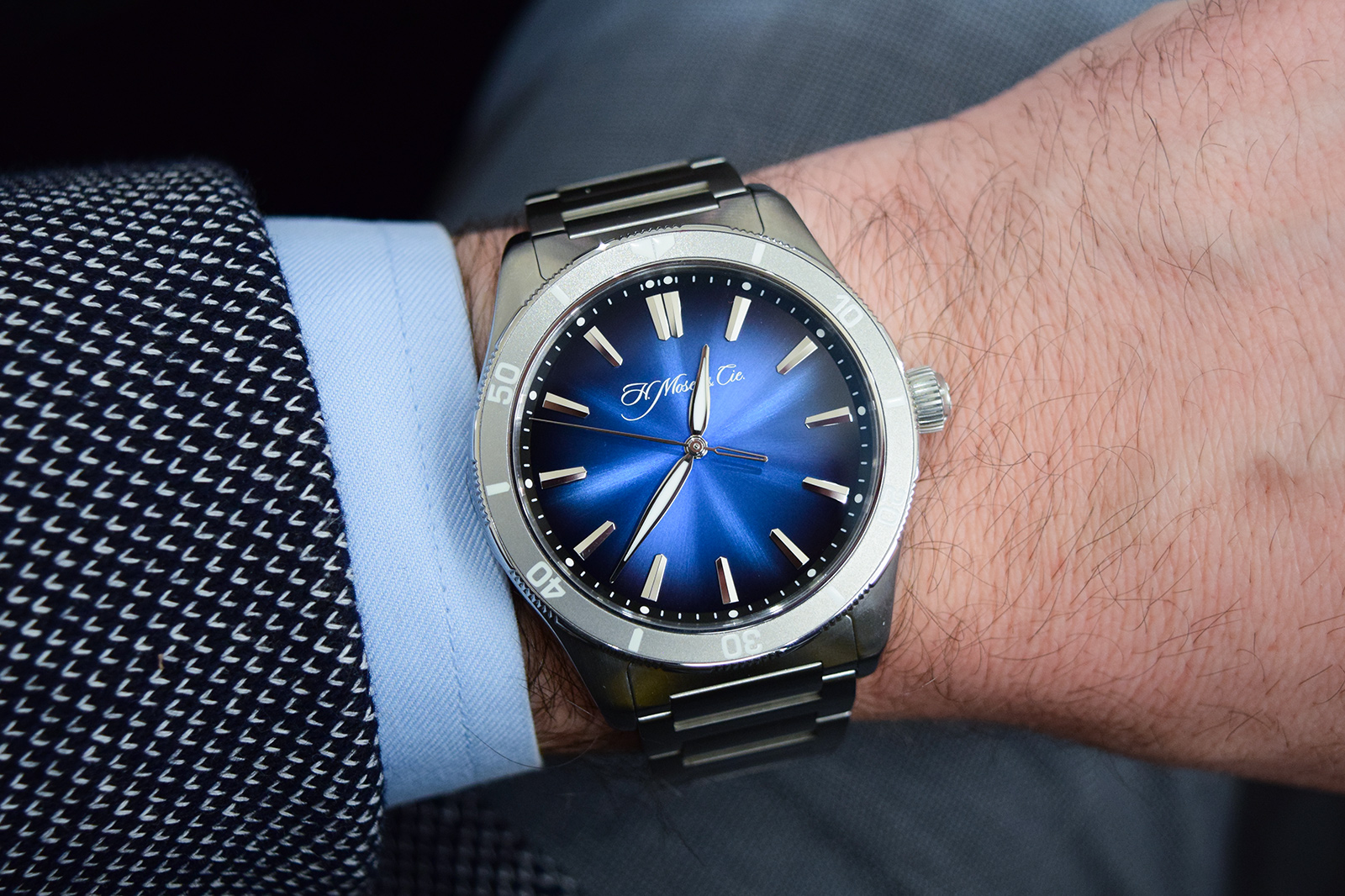 This is a first and bold move into the luxury diver territory for Moser. Arguably one of the more difficult segments as you’re essentially battling a never ending tsunami of submariners, aquanauts, nautili, royal oaks and what not. This is their first foray into unusual territory. If the launch is successful, which I hope it will be, I have no doubt that the design and line will be further refined & will be the start of a long lineage of fresh looking diver style watches.

The Pioneer Central Seconds used to be on top of my wishlist as far as Moserwatches go. I say used to be, because I’m now feeling all sorts of good things for this new Pioneer Central Seconds Rotating Bezel. The name is accurate no doubt but feels a bit uninspiring for what this piece represents. You don’t call Keith Richards the ‘Man Standing On Stage Playing Guitar’ either. For a watch that is this striking, a bolder (nick)name would be more appropriate. I’d love to adopt one, and give it a worthy name.