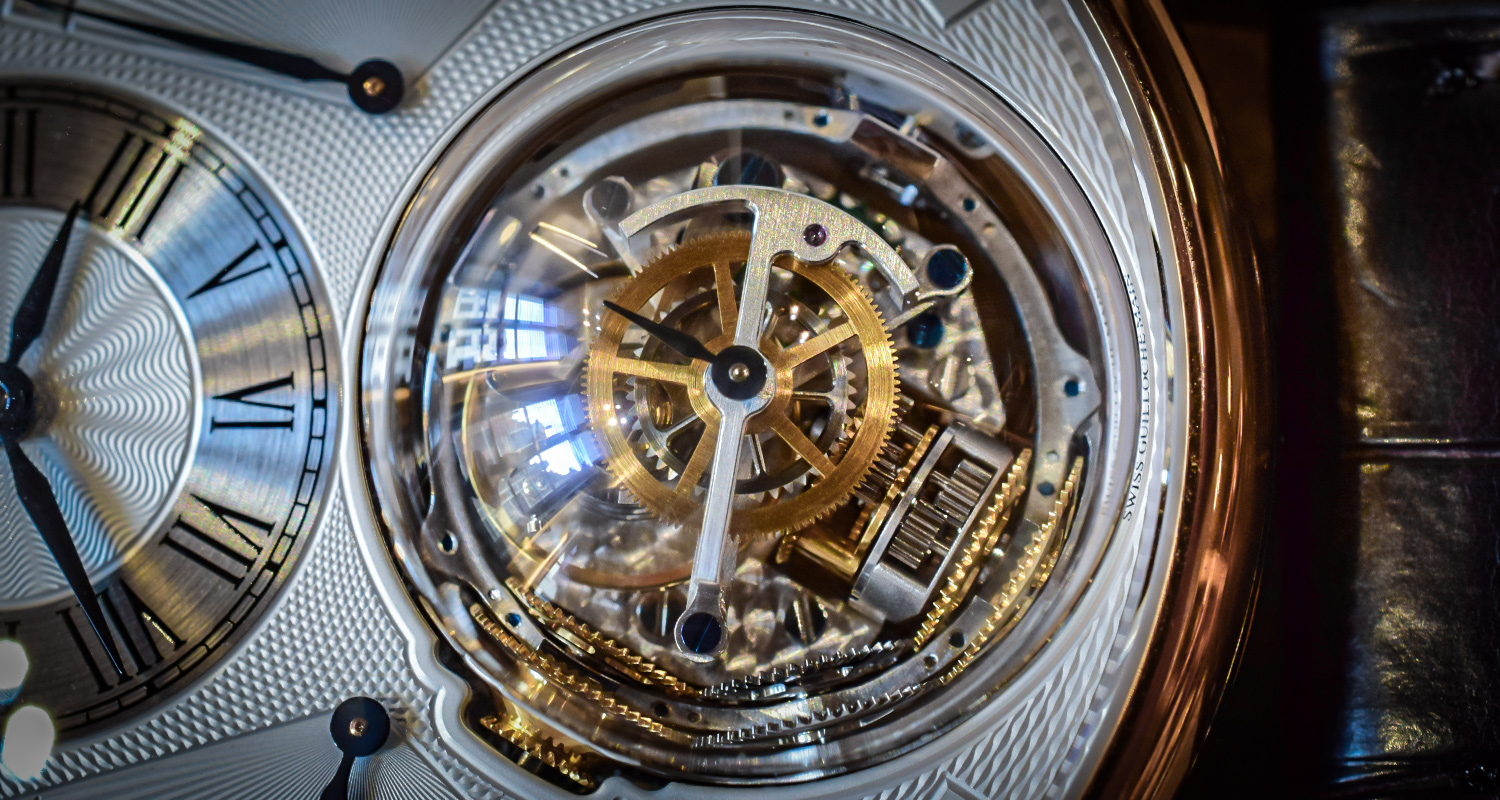 Early October, 2018, we had the pleasure to go hands-on with Zenith’s Academy Christophe Colomb. One of only 75 pieces ever made. It was presented to us during the exceptional Master Class in Haute Horlogerie given by the kind team of Maison De Greef (see and read all about that here). This is the sort of watch that really goes above and beyond and is a testament to the ingenuity & mastery of the watchmakers. The Christophe Colomb Equation of TimeEquation of Time The Equation of Time complication is a feature found in some watches that displays the difference between solar time and standard time (mean time) on a dial or subdial. [Learn More] has won the ‘best complicated watch’ prize a few years ago at the Geneva Watchmaking Grand prix, and you’ll quickly understand why this is so well deserved.

Let’s begin with looking very briefly at the four essential elements on the dial: 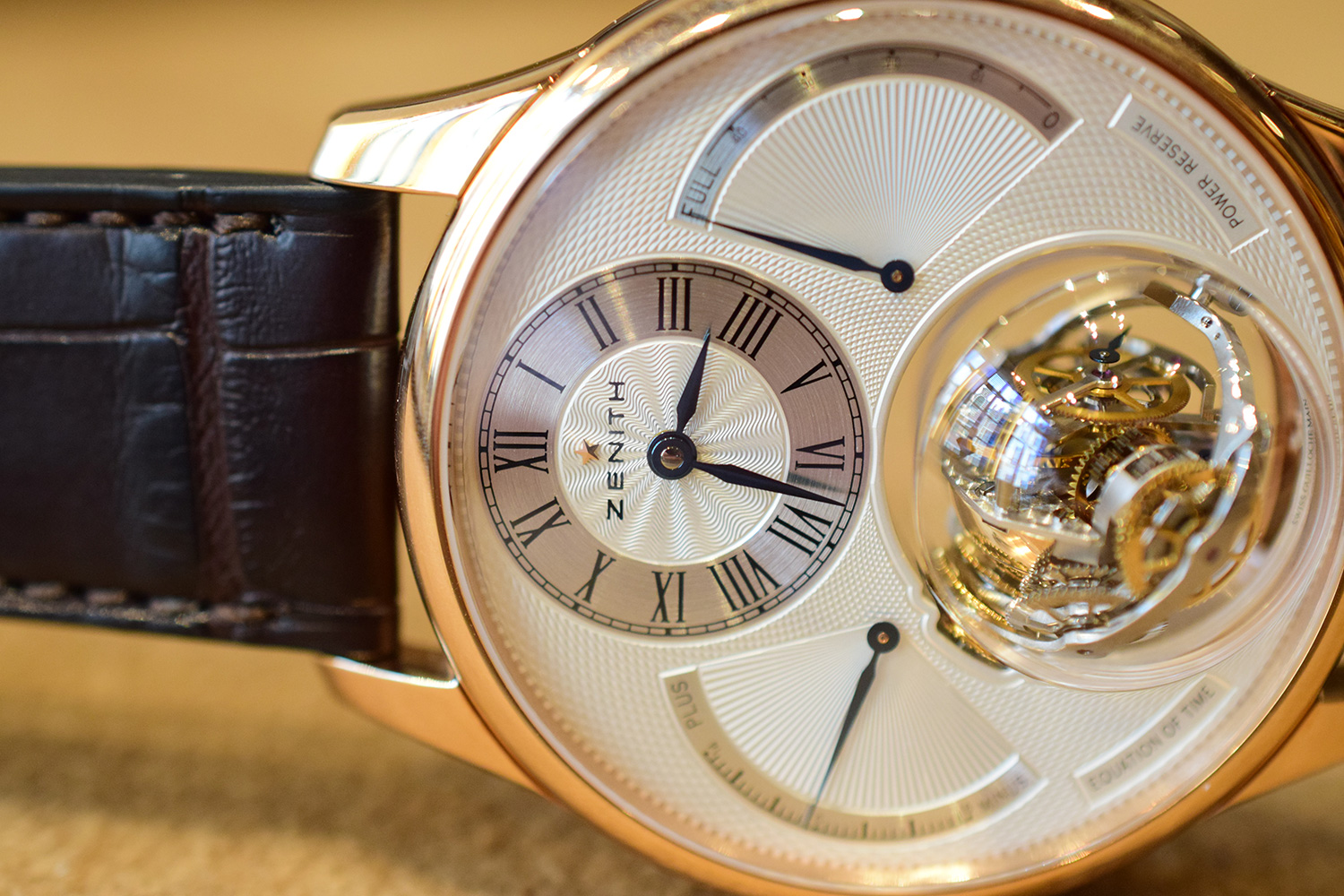 Most obvious is the gorgeous and mesmerizing gyroscopic module. However, there’s more going on with this watch. Having to share the limelight with the Gravity Control, are three readouts on the dial: The time, power reserveRéserve de marche Also known as Power Reserve. A watch's power reserve refers to the amount of time a mechanical watch can run without being wound. The power reserve of a mechanical watch can vary depending on the size of the mainspring, the efficiency of the gear train, and the rate at which the mainspring releases energy. If a watch has a Power Reserve 'complication' it simply means that the status of the power reserve can be seen on the watch itself (either on the dial or movement side of the watch). [Learn More], and the equation of time. 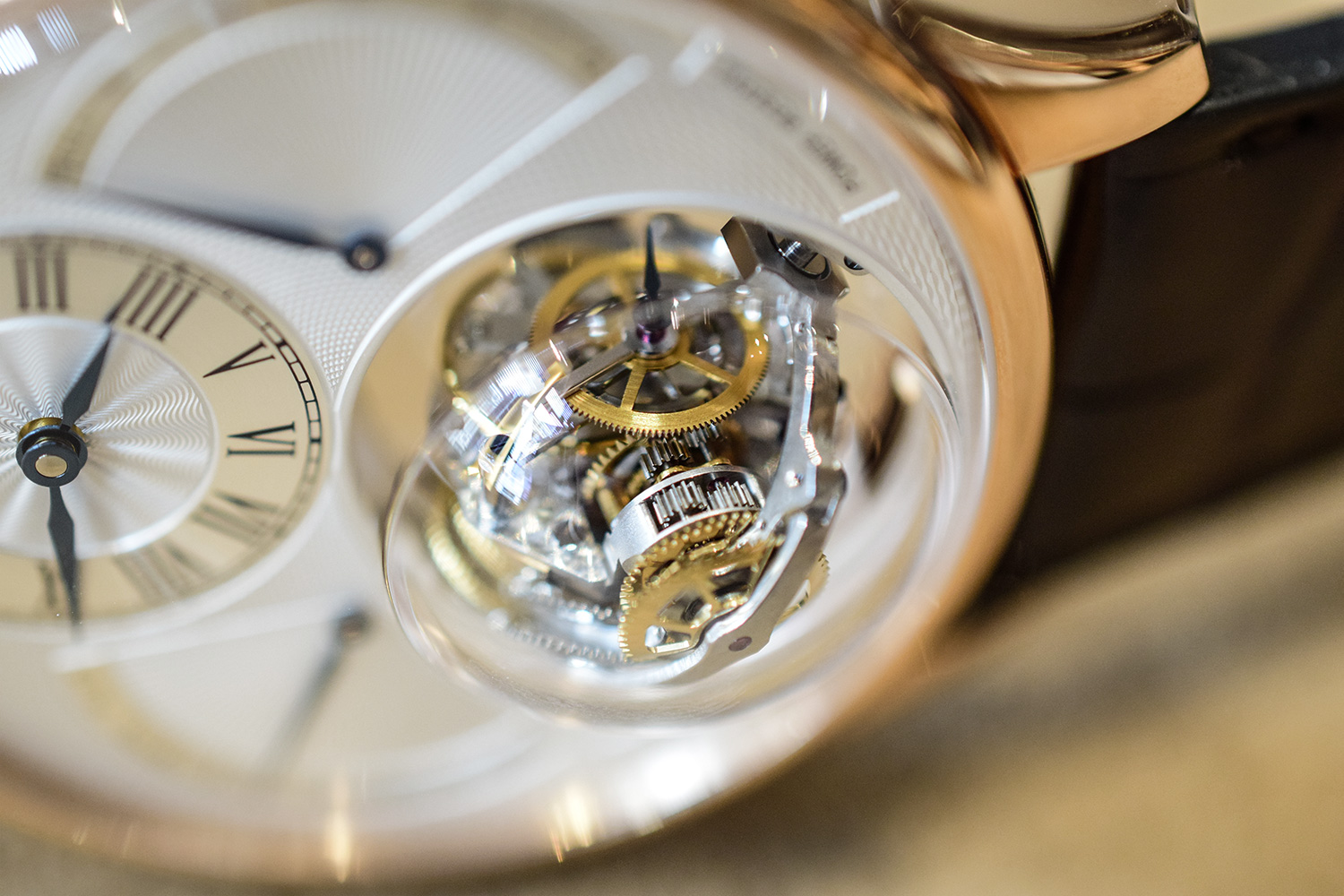 Note also the extraordinary curvature of the sapphire on both the front and the back of the watch.  And yes, despite what you would think, it wears surprisingly well despite that little bump on the back.

The gyroscopic module named “Gravity Control”, is an innovation patented by Zenith. Technically speaking, it is not a tourbillonTourbillon A tourbillon is a complication in a mechanical watch that is designed to improve the accuracy of the watch by compensating for the effects of gravity on the balance wheel and escapement. It consists of a rotating cage that holds the balance wheel and escapement, which rotates on its own axis once per minute. This rotation helps to average out the positional errors caused by gravity, making the watch more accurate [Learn More]. It is however no coincidence that the Academy Christophe Colomb Équation du Temps won the 2011 “Best Complicated Watch Prize”, the star category in the Geneva Watchmaking Grand Prix which is the most highly coveted international award in the watchmaking world. As per Zenith this module was inspired by the Marine chronometers from the old days which Zenith also produced way back when (they were seated in wooden boxes). These chronos, bobbing around the ocean, had a similar style of gimbal-like suspension to keep them as stable as possible, which is also what you’ll see when looking at this module. As you rotate the watch in any direction, the entire cage keeps trying to stay as level as possible. Fascinating to look at. 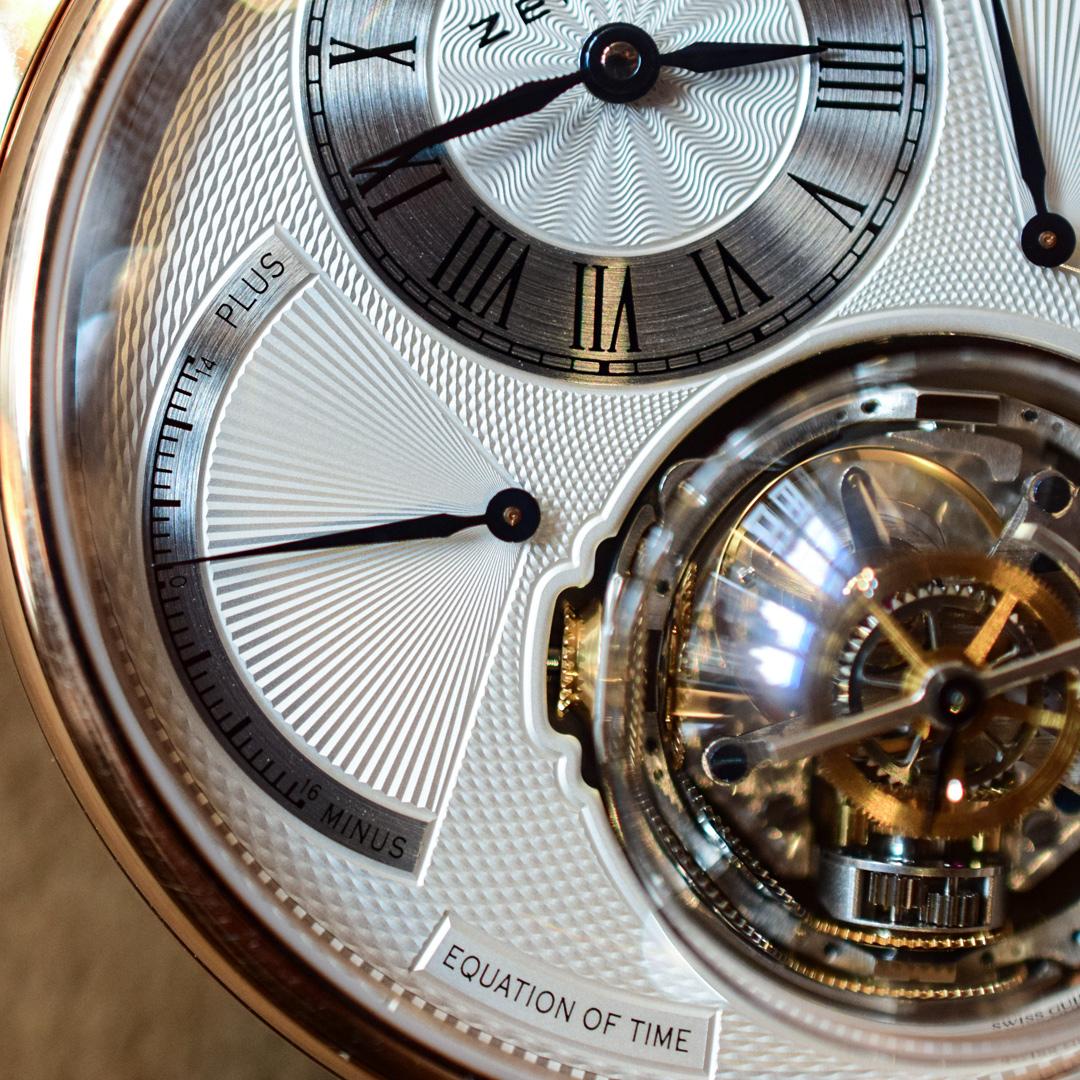 Another technical feature on this watch, as the name suggests, is the equation of time. It essentially shows the discrepancy between the true solar time (what you see on a sundial), and mean solar time (what you see on your watch). The difference, or ‘deviation of time’ between both can run between minus 16 minutes and plus 14 minutes (more or less), and the little gauge on the dial shows you precisely that deviation. This cocktail of the hyper technical escapementEscapement The escapement is a mechanism in a mechanical watch movement that regulates the release of energy from the mainspring and keeps the watch ticking at a steady rate. The escapement is made up of two main components: the escape wheel and the pallet fork. The escapement is responsible for the ticking sound of the watch, and it ensures that the watch runs at a consistent rate. As the escape wheel rotates forward, it locks and unlocks with the pallet fork, allowing a small amount of energy from the mainspring to be released. This causes the balance wheel to oscillate and the watch to 'tick'. [Learn More] module with the astral equation of time makes for a watch that is able to tell the time in an extremely precise fashion. And arguably, also in an extremely fantastic looking fashion.

You’ll also notice an additional month indicator, which is hidden and nicely presented on the back. Overall, the movement is finely finished with blued screwsBlued Screws Not all blue screws are equal. Traditionally heat-blued screws, involves... heat! The blue color is achieved by heating the screws to a high temperature in a controlled and clean environment. This process produces a thin layer of oxide on the surface of the screws, which gives them their distinctive blue color. It is not uncommon to find blue screws on a watch movement that were simply chemically treated, and not heat-blued. [Learn More] and all the bells & whistles you’d expect on a real haute horlogerie piece: 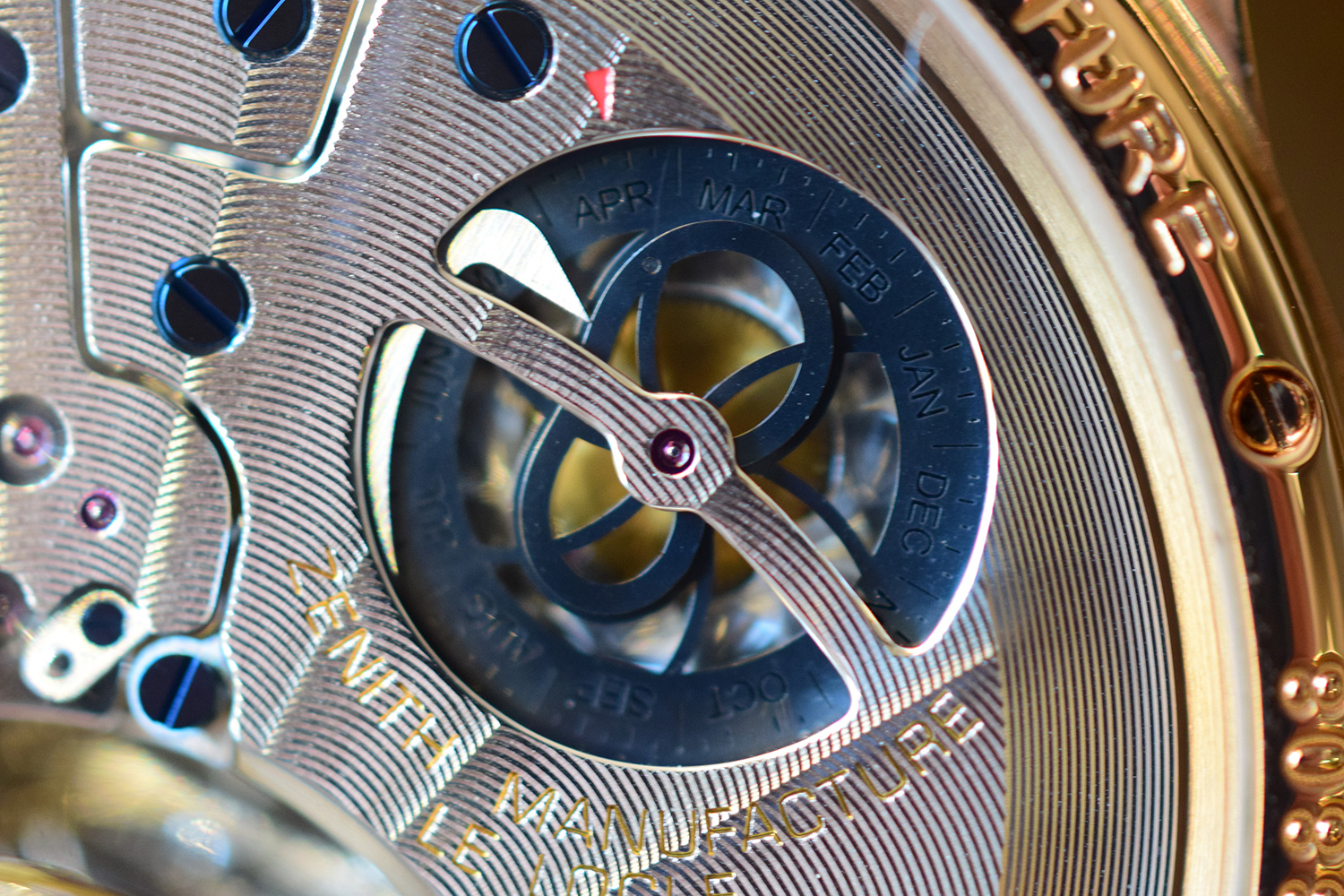 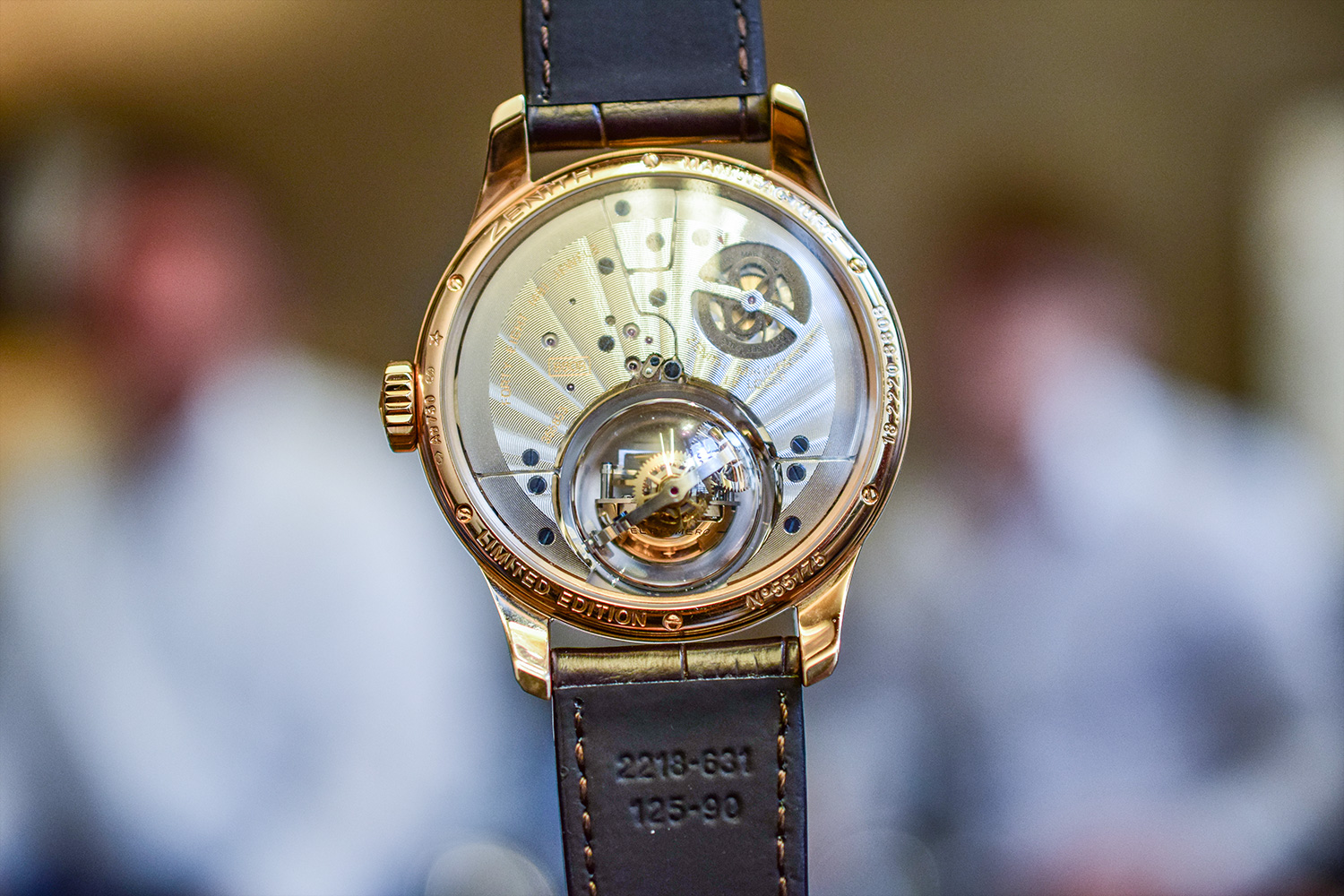 The watch is powered by a manual wound calibre “El Primero 8804” with a 50hrs power reserve. It beats away in typical El Primero fashion at 36000 vibrations per hour.

All of this mechanical wonder is packed in a 45mm case, rather on the large side, but then again this isn’t exactly a watch that one would wear to try and fly under the radar: