Nomos is often stated to be a brand that brings a lot of bang for the buck, a good value buy. For more than a few years now, I’ve been eyeing a particular model, but not its price. And now when looking for the umpteenth time to pick one up, I noticed that the Germans are not immune to price increases either. We looked previously at Rolex historical pricing here, and what you will read in that article is that prices have been going up 28% since 2008. Inflation adjusted that translated to a 10% price increase. Now that we know the pricing history thought up in the Jura Mountains, let’s have a closer look at the pricing strategy set out by the NOMOS crew located in the Black Forest.

Before we dive into the NOMOS historical pricing, it’s time to take a step back and get some perspective. Let’s have a quick look at how the very German VOLKSWAGEN currywürst price has behaved in those same past 10 years. The VOLKSWAGEN sausage is a thing, in case you haven’t heard about them yet. In fact this sausage is their most sold Volkswagen product.

This particular VOLKSWAGEN was leisurely sitting at EUR 1.6 in 2008 and is nowadays going for around EUR 1.99 it seems. That’s a flat increase of  39%. Let’s adjust for inflation. The euro experienced an average inflation rate of 1.22% per year. Translated in currywürst prices, that means an increase of  around 9%. According to the ECB consumer price index, prices in 2018 are 12.90% higher than prices in 2008. Nothing crazy and pretty much the same as the 10% increase for the average stainless steel Rolex price for that same time period as we saw previously. So we’re dealing with an increase in the range of 9%-12.90%. Let’s see below if NOMOS follows suit.

NOMOS has been steadily moving up in the watchmaking world. Building upon its name for being a value & quality brand. In 2013 they introduced the gold Lambda & Lux models which cost a lot more than your average NOMOS. In 2014 they then unleashed their own in-house escapementEscapement The escapement is a mechanism in a mechanical watch movement that regulates the release of energy from the mainspring and keeps the watch ticking at a steady rate. The escapement is made up of two main components: the escape wheel and the pallet fork. The escapement is responsible for the ticking sound of the watch, and it ensures that the watch runs at a consistent rate. As the escape wheel rotates forward, it locks and unlocks with the pallet fork, allowing a small amount of energy from the mainspring to be released. This causes the balance wheel to oscillate and the watch to 'tick'. [Learn More], which is certainly no small feat. In 2015 finally, they introduced their new in-house DUW calibre. Their efforts didn’t go unnoticed and they even received the nod from Philippe Dufour, the legendary watchmaker. When he was asked about “the best watch to buy under 10K USD”, here’s what he answered:

“I would say that you could buy at this price, maybe a bit less, a very good watch in terms of value and quality. It’s not Swiss — sorry — [but] a German brand called NOMOS. I found that this brand makes a very serious product. I like these watches, and for somebody who wants to start, I think this will be a good [choice]: not too expensive and good value for money.” – Philippe Dufour

So in the period 2008-2018 quite a lot happened at NOMOS, not to mention exponential growth. For this price analysis, we’re going to focus on 2008-2018 time period, and on some of NOMOS’ iconic models, all handwound watches. Please fasten your seat-belts, this is about to get wild.. 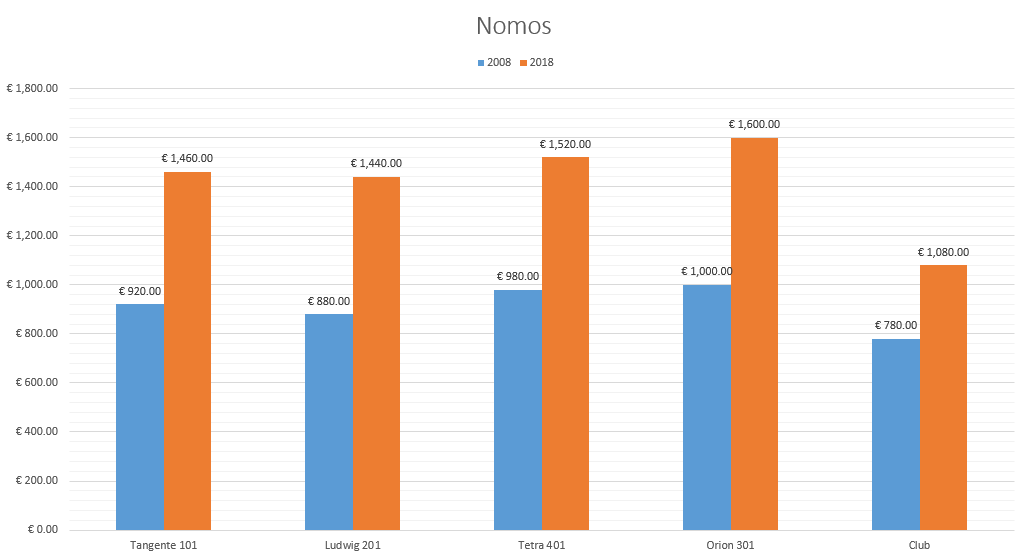 What you are seeing above, are the catalogue prices, comparison from 2008 with today’s prices as listed on NOMOS’ official store. These are price increases averaging 55%. With the Ludwig and Orion standing out on the high end with increases of approximately 60%. On the low end, we see the Club has ‘only’ increased with 38%. Adjusted for inflation it looks as follows: 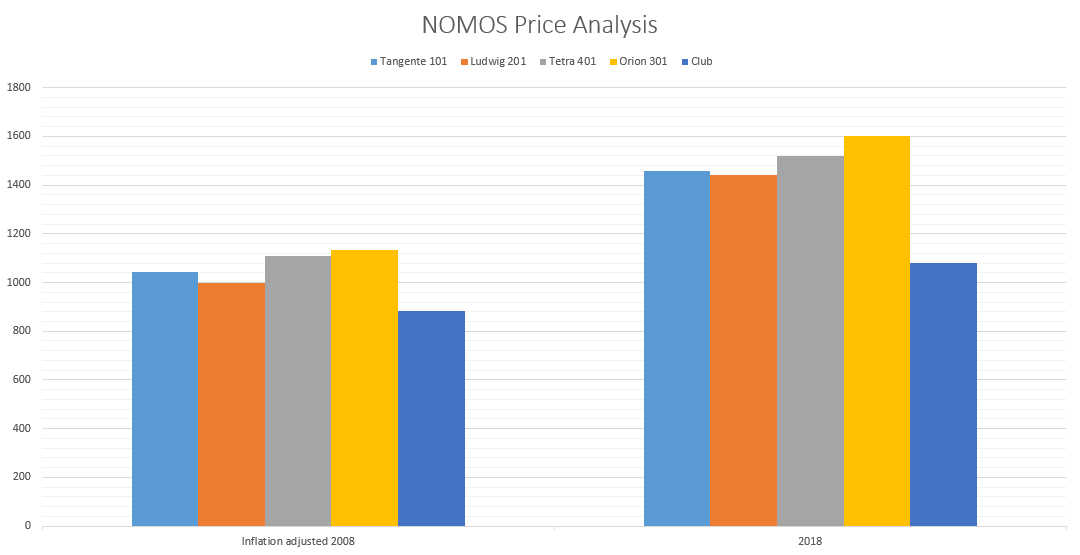 So after inflation, this is what you’re essentially talking about:

That’s still an impressive average increase of 35% across the range. To put things into a German perspective, that’s 26% more than the inflation adjusted increase of the much beloved VOLKSWAGEN currywürst. Ich glaub mich knutscht ein Elch!

We see that NOMOS is growing rapidly, hiring and innovating at a pace we don’t see in many other places of the main stream (Swiss) brands, and certainly not in this price category. All of that of course, costs a lot of money. In addition, they are an independent and in-house manufacture, and things tend to cost a bit dearer on that side of watchmaking.