Today we have a closer look at what is arguably Grand Seiko’s greatest hit: The Snowflake. Reference SBGA211. We have previously covered this wacth’s predecessor, the SBGA011 on this website in a separate article, I encourage you to go read up on the specifics in that article if you haven’t already done that. You can see that by clicking this link right here. Now, without further delay, please click below to view the full VIDEO review of the SBGA211: 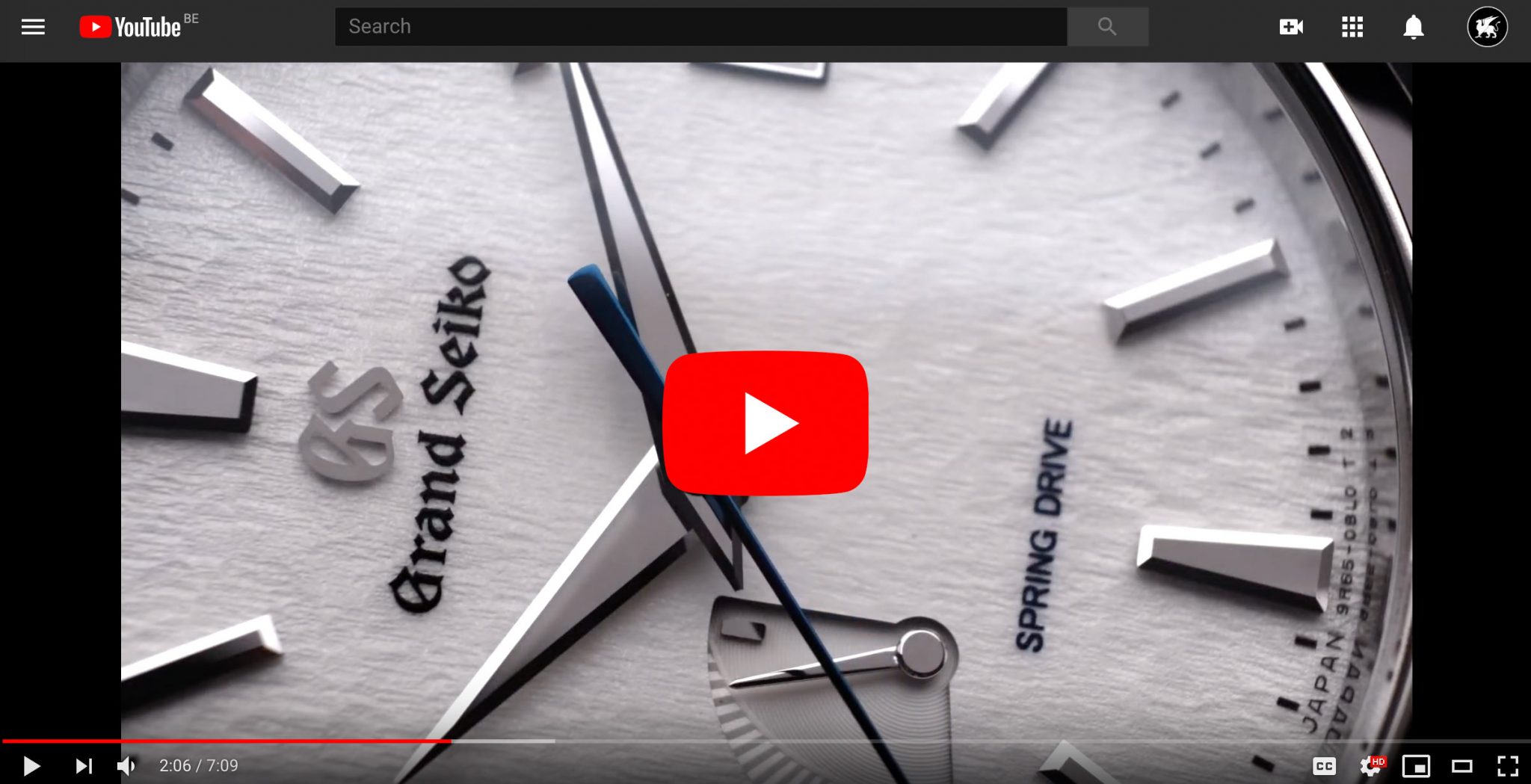 The Grand Seiko Snowflake has been around for a very long time and a lot has been written about it to date. The watch was first released in 2010, back then it still had the old Seiko branded dial. The dials have since been updated moving the Grand Seiko logo to twelve o clock. The watch takes its nickname from the dial color and texture, resembling fresh snowfall. Complications on this watch are limited to time, date and a 3-day power reserveRéserve de marche Also known as Power Reserve. A watch's power reserve refers to the amount of time a mechanical watch can run without being wound. The power reserve of a mechanical watch can vary depending on the size of the mainspring, the efficiency of the gear train, and the rate at which the mainspring releases energy. If a watch has a Power Reserve 'complication' it simply means that the status of the power reserve can be seen on the watch itself (either on the dial or movement side of the watch). [Learn More] indicator.

The secret ingredient powering it all, is the magnificent Spring DriveSpring Drive A Spring Drive movement, pioneered by Grand Seiko, is a type of mechanical watch movement that combines the traditional mechanics of a mechanical watch with the precision of a quartz watch. It uses a mainspring as the source of energy, just like a mechanical watch, but instead of using a traditional escapement, it uses a quartz crystal to regulate the release of energy. The Spring Drive movement is considered to be highly accurate, and is known for its smooth, gliding seconds hand. [Learn More] movement. A Quintessential Grand Seiko movement, responsible for that ultra smooth gliding seconds hand. It lives in its own world, somewhere in between the mechanical watch world and the quartz world. 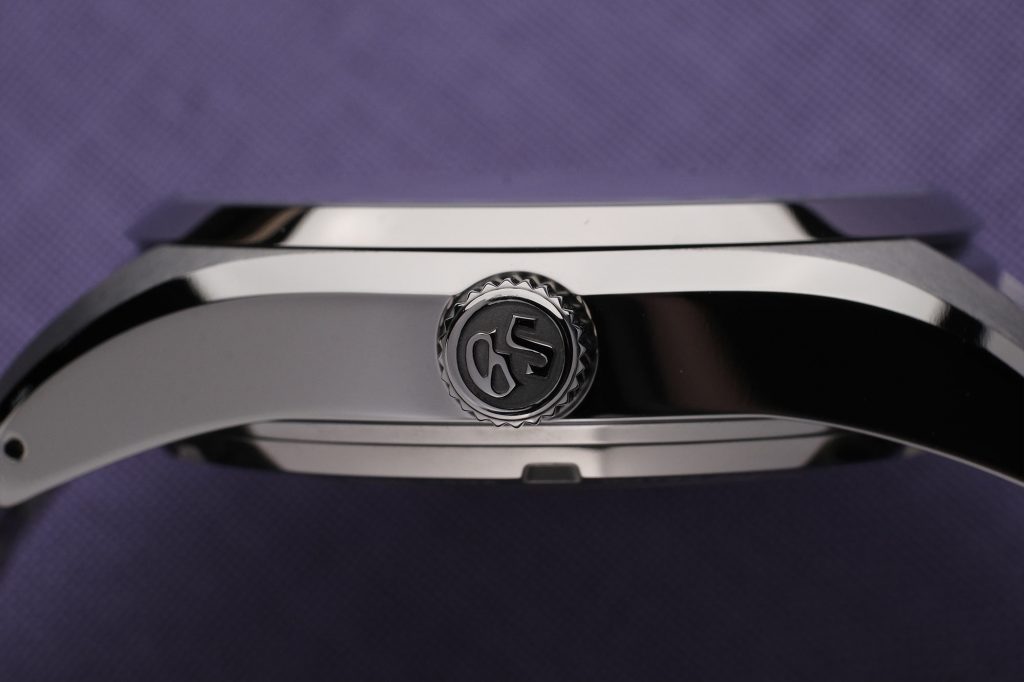 The 41mm case is made from high resistance titanium and is very light. “ZaratsuZaratsu Polishing Zaratsu polishing is a type of polishing technique used in watchmaking, specifically for the polishing of steel components, such as the case, lugs, and bracelet. It is a process that uses a spinning circular disk with an abrasive surface. The craftsperson, holding the watch part, applies a certain level of pressure and uses a specific angle to ultimately achieve a mirror-like finish. [Learn More]” polishing results in mirror polished case sides. This is  a hand polishing method traditionally used to finish Japanese swords. The case shape on the snowflake lacks the sharper angles found on Grand Seiko’s famed 44GS case. No visible crownCrown The knob on the outside of the watch that you typically use to either wind the mainspring or set the time [Learn More] guards, however the screw down crown does get some protection as it sinks in the side of the case and helps give the watch it’s 100m water resistance.

Now, this is a true grand Seiko. And that means you will want to bring a loupe when looking at this watch, the finishing is just that good and worth a closer look. 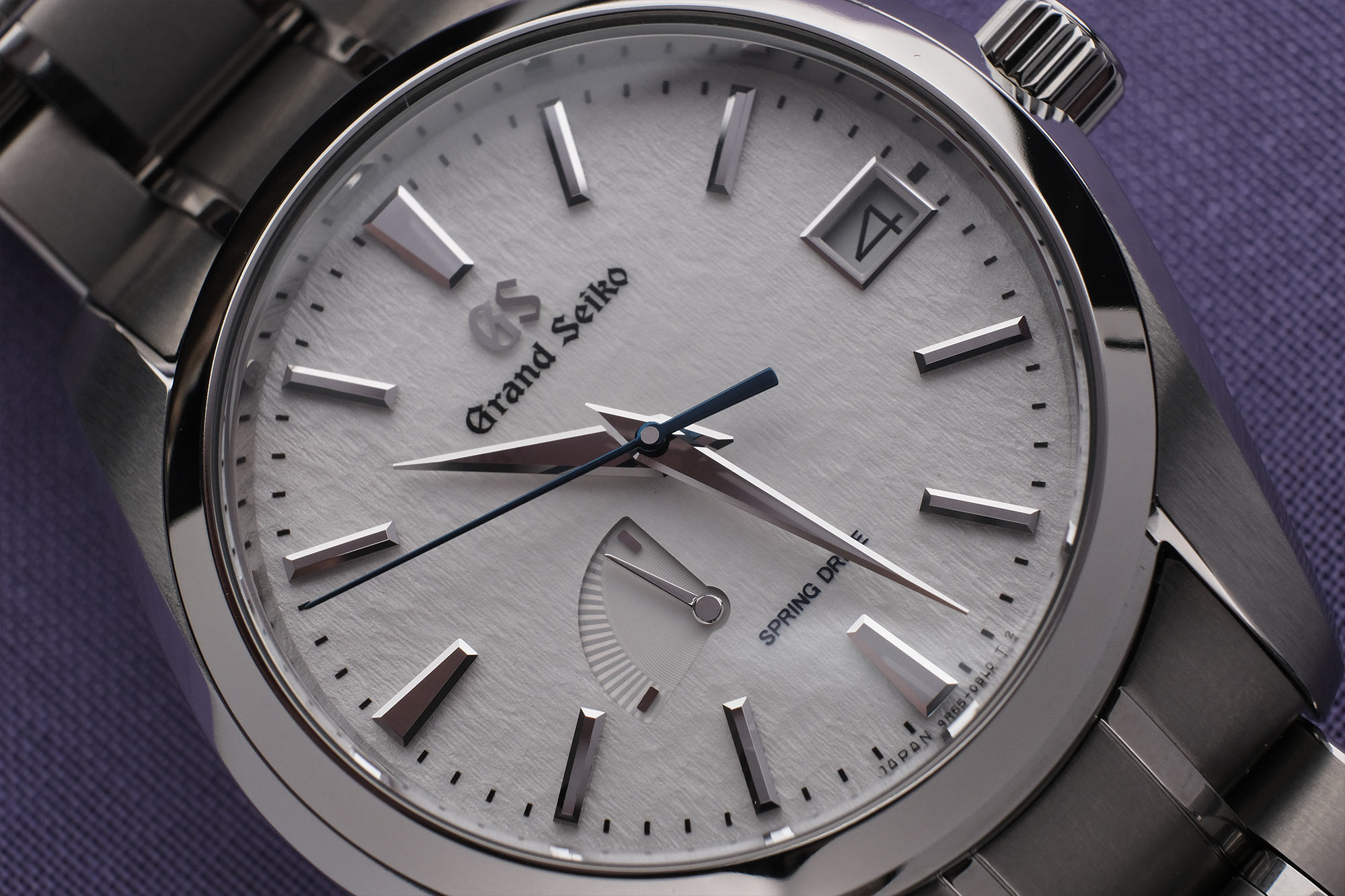 The hands are mirror polished and resemble tiny little swords. As a result of the hand polishing the hands play with the light and take on a different colour depending how they pick up the light. They are very legible, in case the top side of the hands turns almost black, the beveled edge will turn silver,. And the opposite is also true. Maximum points for legibility, if we briefly ignore the hands have no lume. The same high level of finishing is found on the blue heated seconds hand that glides above the dial. The power reserve indicator is quite minimalist, with a nicely textured dial and no obvious wording or colours applied. 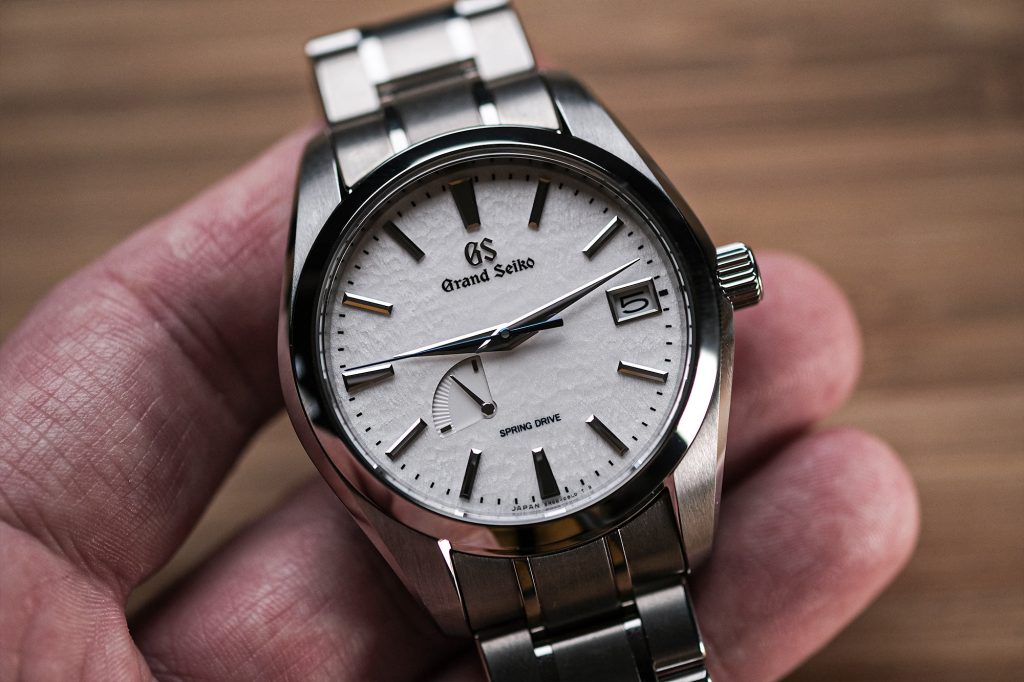 The applied indices are in a league of their own. Nine sides to each index, perfectly polished, simply gorgeous. These must be some of the most satisfying indices on just about any dial. This eye for detail also extends to the often neglected date window, as you look closer you can see multiple sides and finishes, all on what is essentially a simple date window. 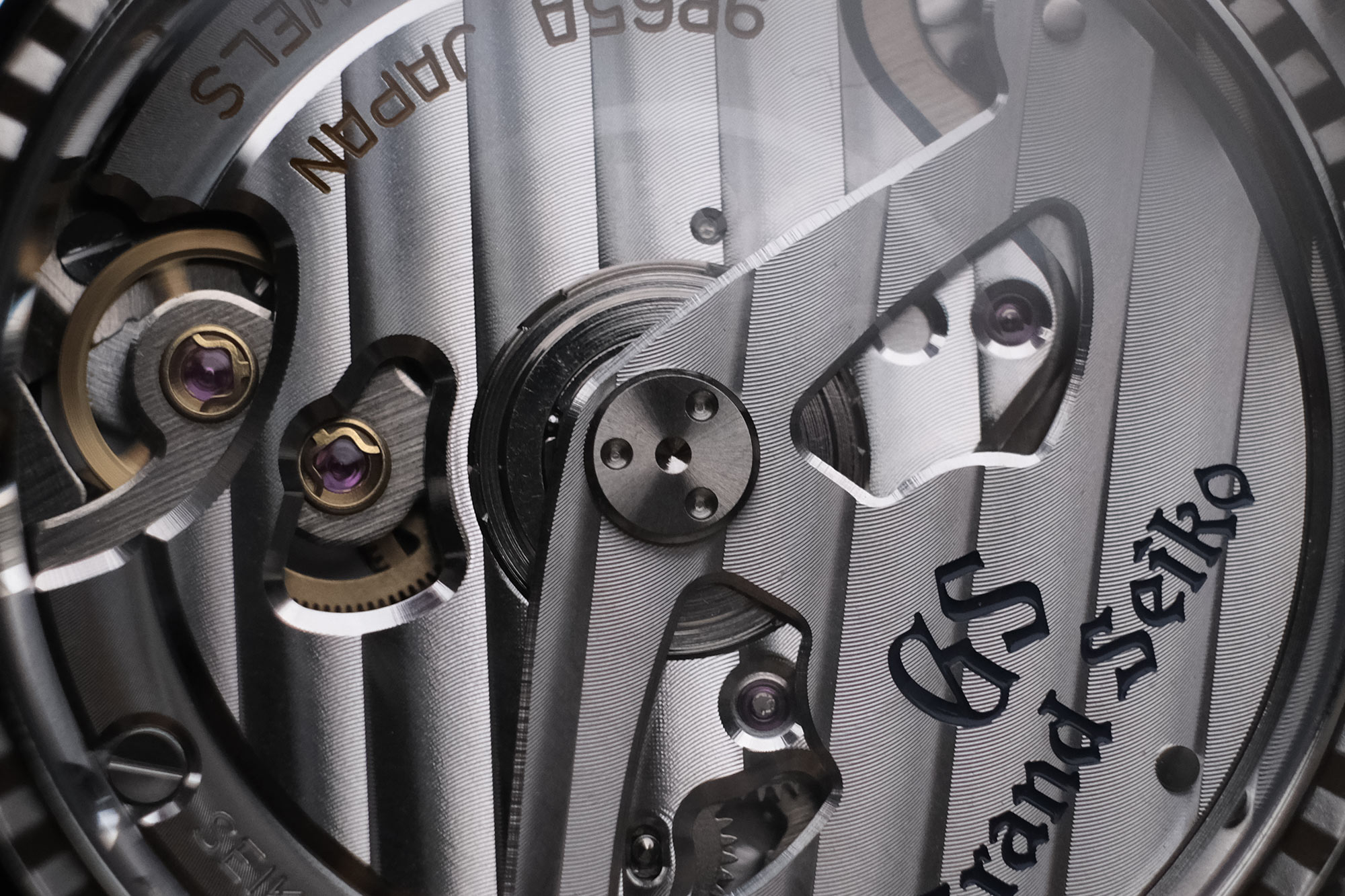 Now that we are done with the dial side, let’s talk about what is happening under the hood here. This is the revered spring drive movement at work. Dismissed by some as a quartz movement, I find that highly inaccurate. This is an ingenious mechanical movement. CaliberCaliber The caliber ('movement') is the heart and engine of a watch. It consists of a number of interconnected components that work together. Energy is transmitted through the gear train, to the escapement mechanism. The escapement mechanism releases this energy in a controlled manner. This drives the gear train, which ultimately rotates the hands of the watch and keeps time. [More Info] 9R65 with a 72-hour power reserve.

The Spring Drive movement is powered by a mainspringMainspring The mainspring is a spiral-shaped metal spring that stores energy in a mechanical watch movement. It is located inside the barrel. The mainspring is wound, either manually or automatically. The mainspring unwinds over time, and the watch will stop running when the mainspring is fully unwound. [Learn More], just like all other mechanical watches. Composed of over 200 separate parts. Spring Drive uses what grand Seiko calls a tri-synchro regulator, a mechanism to control the speed at which the spring unwinds, resulting in the gliding seconds hand. The movement uses a home grown quartz oscillator and is powered by a mainspring, not by a battery. This is not a quartz movement. It is a mechanical movement, or if you want to call it that, a hybrid movement. Visible edges are nicely beveled and the decorations are more than sufficient. The eye catcher is the drive wheel and glide wheel that spin away in tandem. 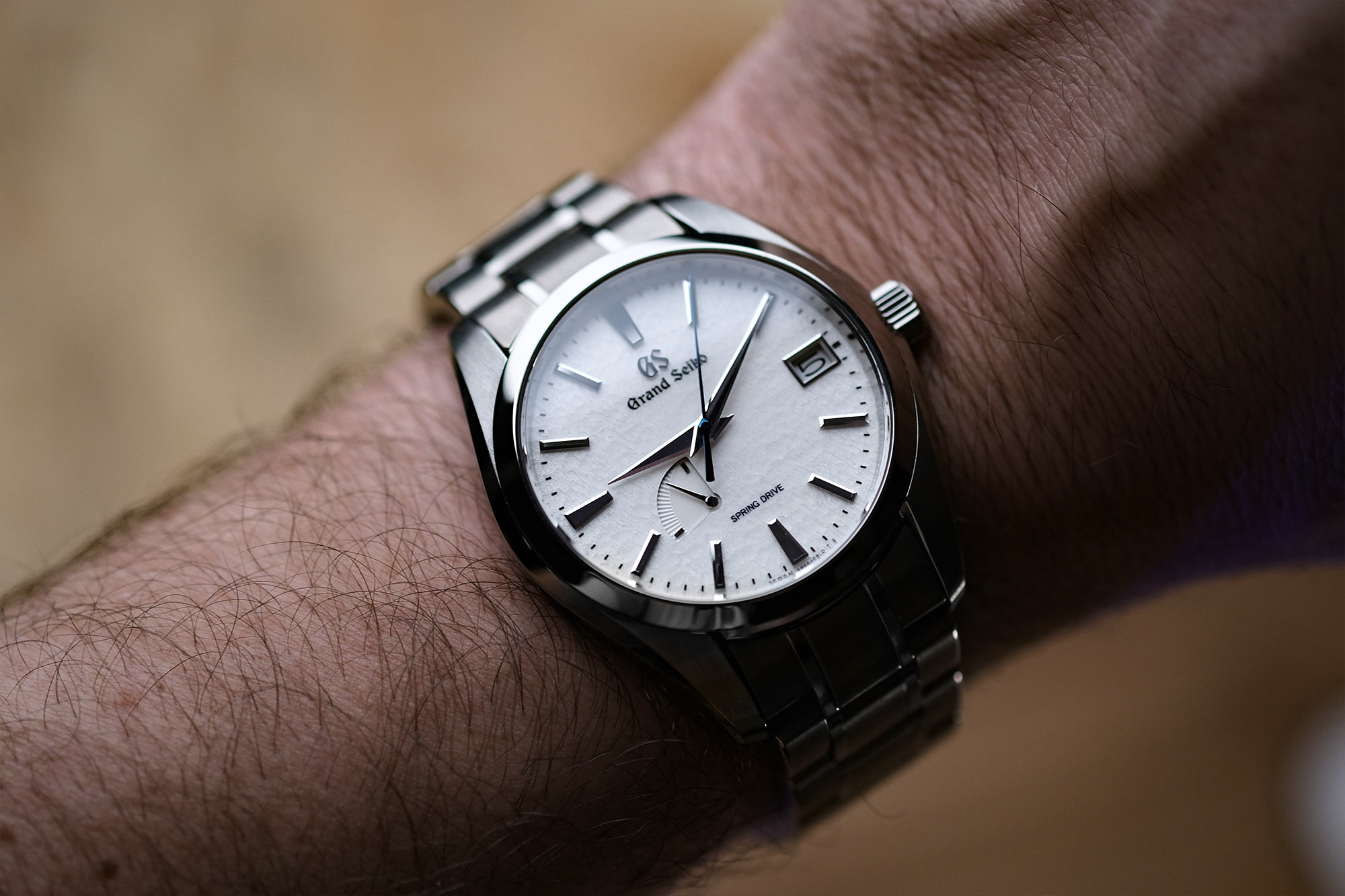 Now, how does it wear? Well, it wears very light on the wrist, a rather strange sensation if you are used to wearing steel or gold watches which are much heavier than this titanium one.  The size feels quite right and it sits nicely on the wrist. Shown here on a bracelet, the Snowflake also looks very good on a wide range of leather straps. The bracelet is comfortable but not best in class. The clasp looks fantastic and sits very low and nicely against the wrist, however as a result there is no real micro adjustment. Fun fact, the links on the bracelet are held together by pins and collars as titanium and screws don’t like each other very much. 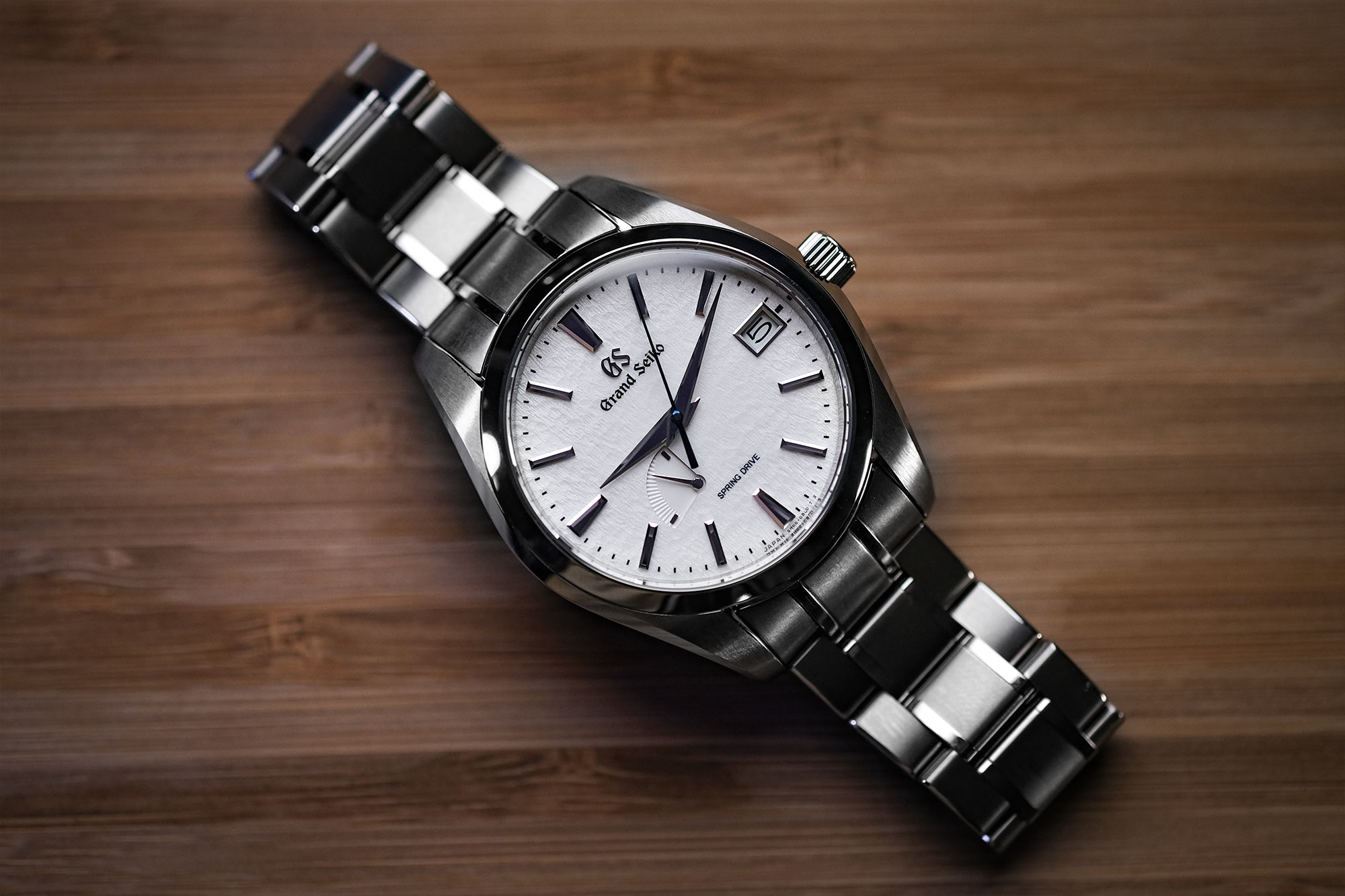 This watch offers truly a lot of details which are make this watch a visual spectacle as we have just seen. From a distance this watch is not a busy or loud watch at all. In fact, most of the details almost fade away from a distance. As a result, the watch is very understated and an easy choice for daily wear.

As this watch has an automatic movement, features time and date, and also includes a 100meter water resistance, this actually makes for an outstanding go anywhere do anything wristwatch. In fact, the Grand Seiko Snowflake makes my list of possible perfect one watch collections. This happens very rarely. This watch offers visual abundance from up close, and elegant simplicity from a distance. Understated elegance, the Grand Seiko snowflake.