Back in 1964 Deke Slayton, NASA operations director, came up with a directive for an official NASA pilots watch. James Ragan was the young engineer missioned with testing and defining the choice of watch. NASA consequently sent out a proposal to a large number of watch manufacturers. Only four bids arrived that matched the blind directive. Blind means the watch manufacturers did not know what would be the final purpose of the watch.

One of the submitted watches was too large so in the end only three were subjected to the NASA test program consisting of 10 different combined tests such as G-force conditions, decibel exposure, humidity, high oxygen, extreme heat and cold,… The purpose was that the tested watch would pass every single of these tests.

Only after the first two tests, two of the contenders, Rolex and Hamilton, failed to pass the required tests. Which means only Omega was left. The latter still had to pass all the remaining tests but did so with flying colors. And this is how the Omega Speedmaster, originally designed to time race cars, became official NASA equipment without Omega even being aware of it at that point, although some astronauts like Walter Schirra or Leroy Gordon Cooper already took their personal Speedmaster CK2998’s already to space few years earlier.

Like James Ragan once commented during an interview “the Speedmaster is a tough made watch, we beat the devil out of it”. 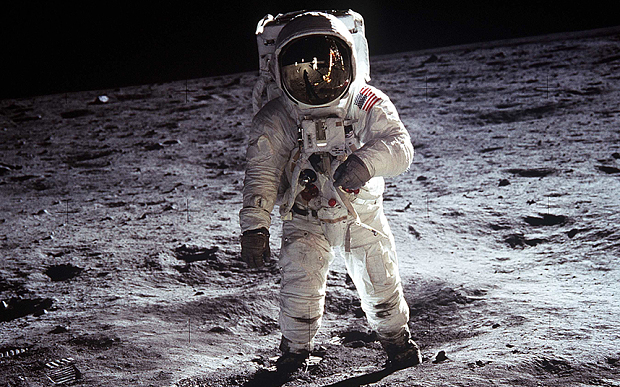 We are all familiar with history so when Apollo 11 finally landed on the moon on July 20th 1969 and Buzz Aldrin stepped on the moon surface on July 21st, Omega became the first watch brand on the moon! In fact Neil Armstrong walked on the moon 19 minutes earlier but was not wearing his watch when doing so because he left his 105.012 Speedmaster in the lunar module as a backup, as the LM’s electronic timer had malfunctioned before. 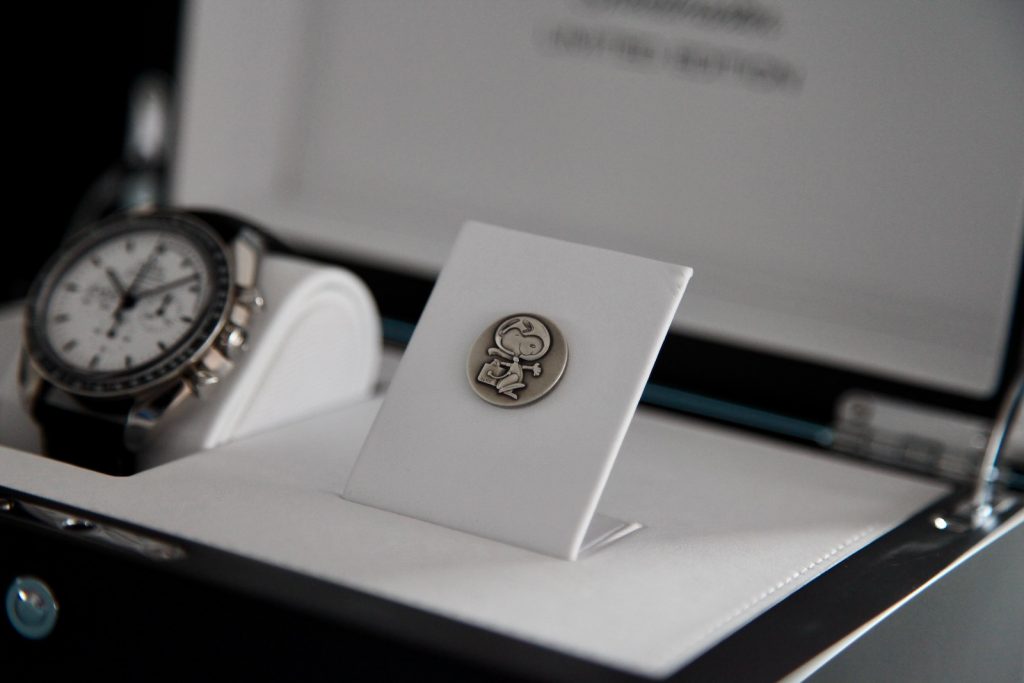 So what does this have to do with Snoopy you may wonder? Well, NASA requested Charles M. Schulz, the creator of the Peanuts comic, whether they could use Snoopy as an unofficial mascot for NASA. The Peanuts strip was very popular amongst those who worked at NASA and so they came up with the Snoopy Award to thank people with a significant contribution to the safety of NASA space missions.

This award presented itself as a simple sterling silver lapel pin that was worn in space before handed out together with a framed Silver Snoopy certificate and a commendation letter. 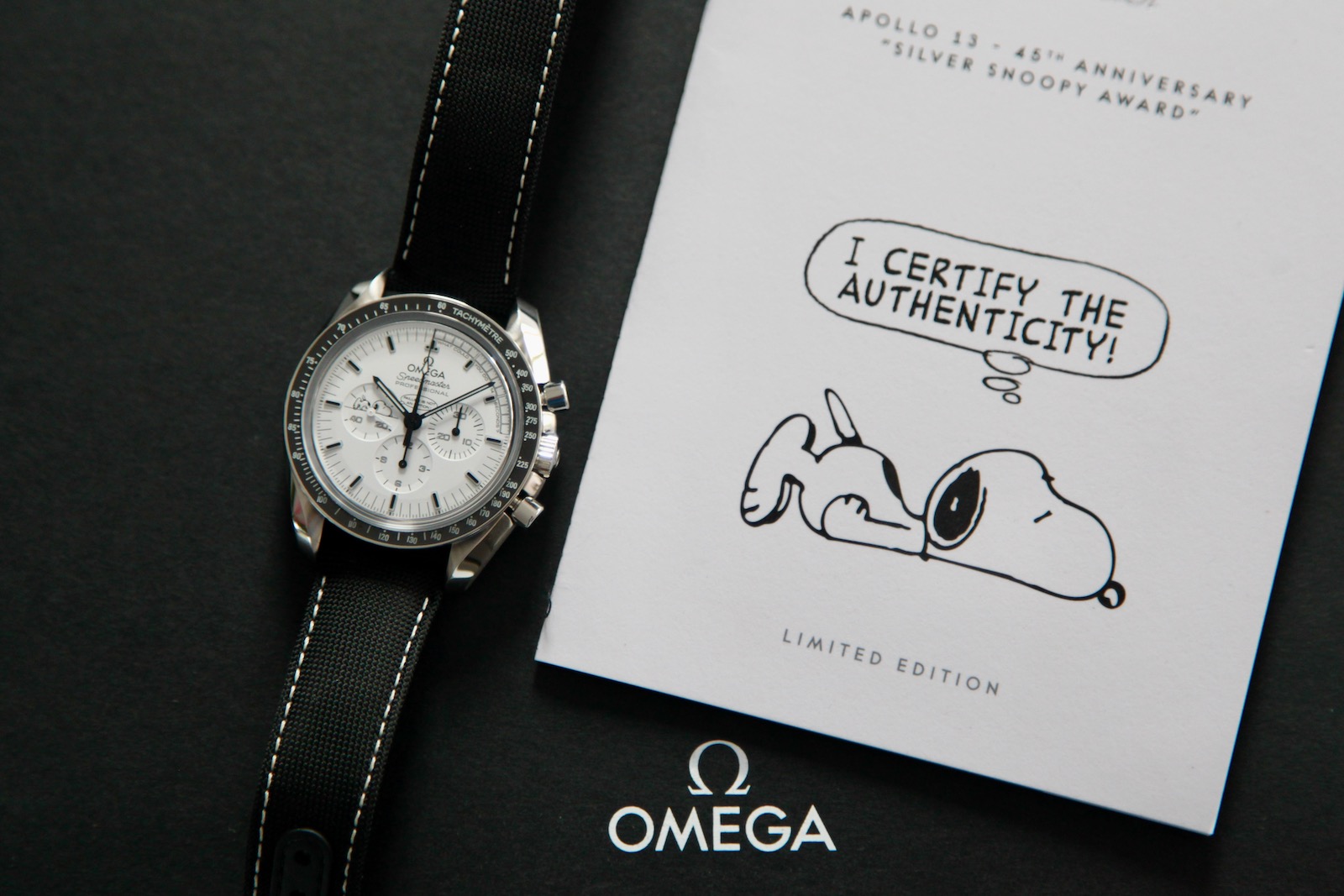 Ok, so now you know why Speedmaster and why Snoopy but still not what brought them together, right? 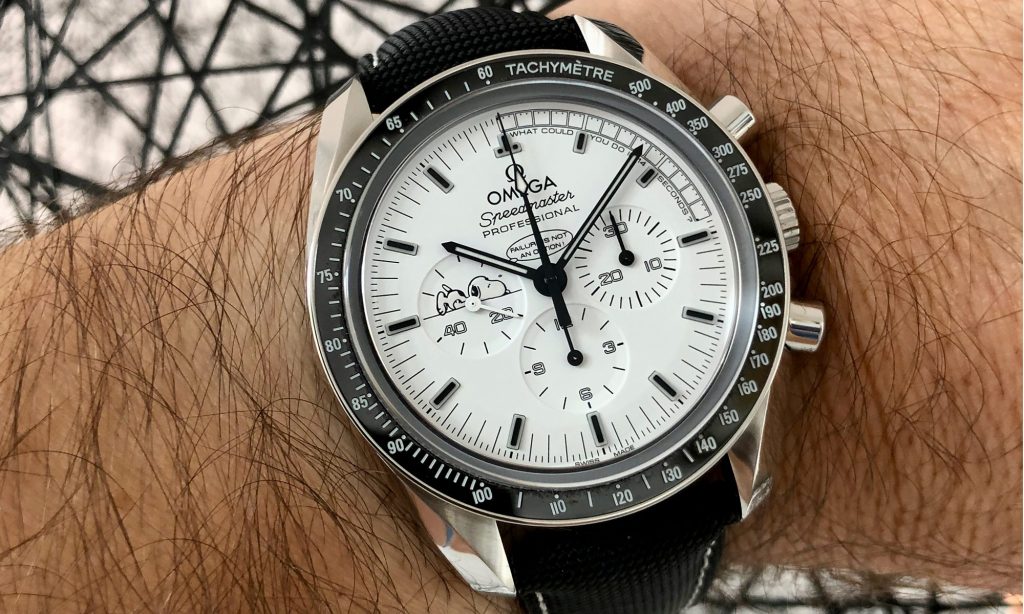 We need to make a small jump in time to April 13 1970 when an oxygen tank exploded on board of the service module of Apollo 13, on its way to perform the third moon landing in history. Due to this event they had to abort the mission and return to earth with the Lunar Module, designed only to land on the moon surface and to keep two people alive for two days. And not three astronauts for four days. Consequently they had to safe power by shutting down all non-vital functions in the Lunar Module, including the heaters and the digital clock.

To make it even a bit more of a challenge, command center in Houston informed them they were roughly 70 nautical miles off course. Which meant they risked bouncing off because of the wrong entry angle when approaching earth’s atmosphere. 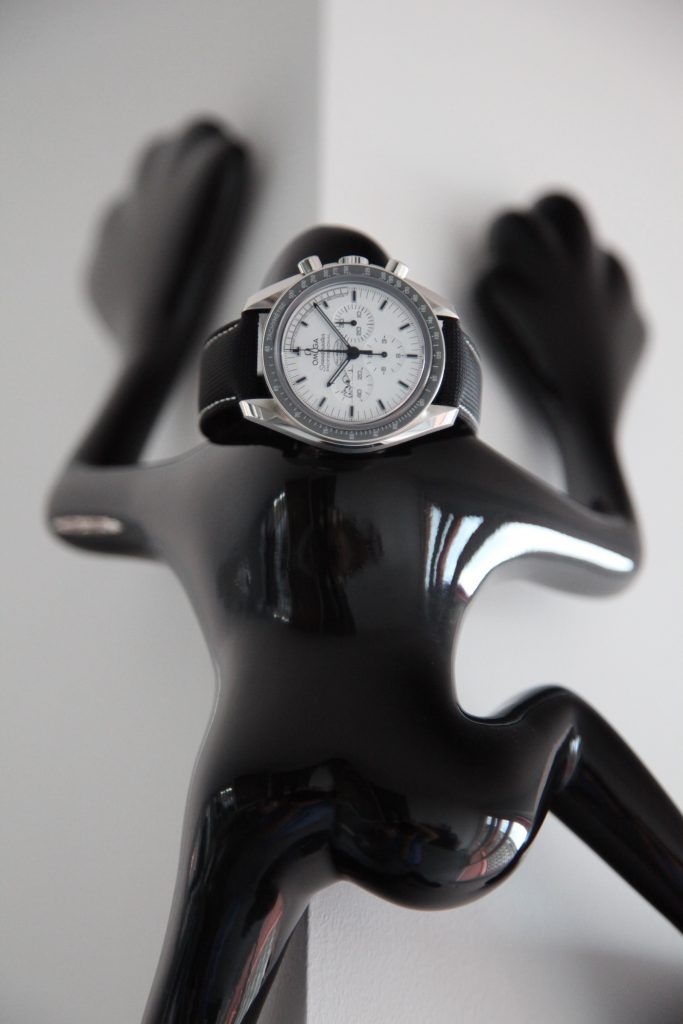 And this is where the Speedmaster earned its eternal fame and glory. The three astronauts decided to perform short engine bursts using a crosshair on their window to focus on the earth’s daylight/nighttime line. James Lovell did the steering while keeping an eye on the Earth. Fred Haise took care of the sideway movement to keep the right angle. And John Swigert timed the engine burst for exactly 14 seconds by using the Speedmaster on his wrist as a precise timer. 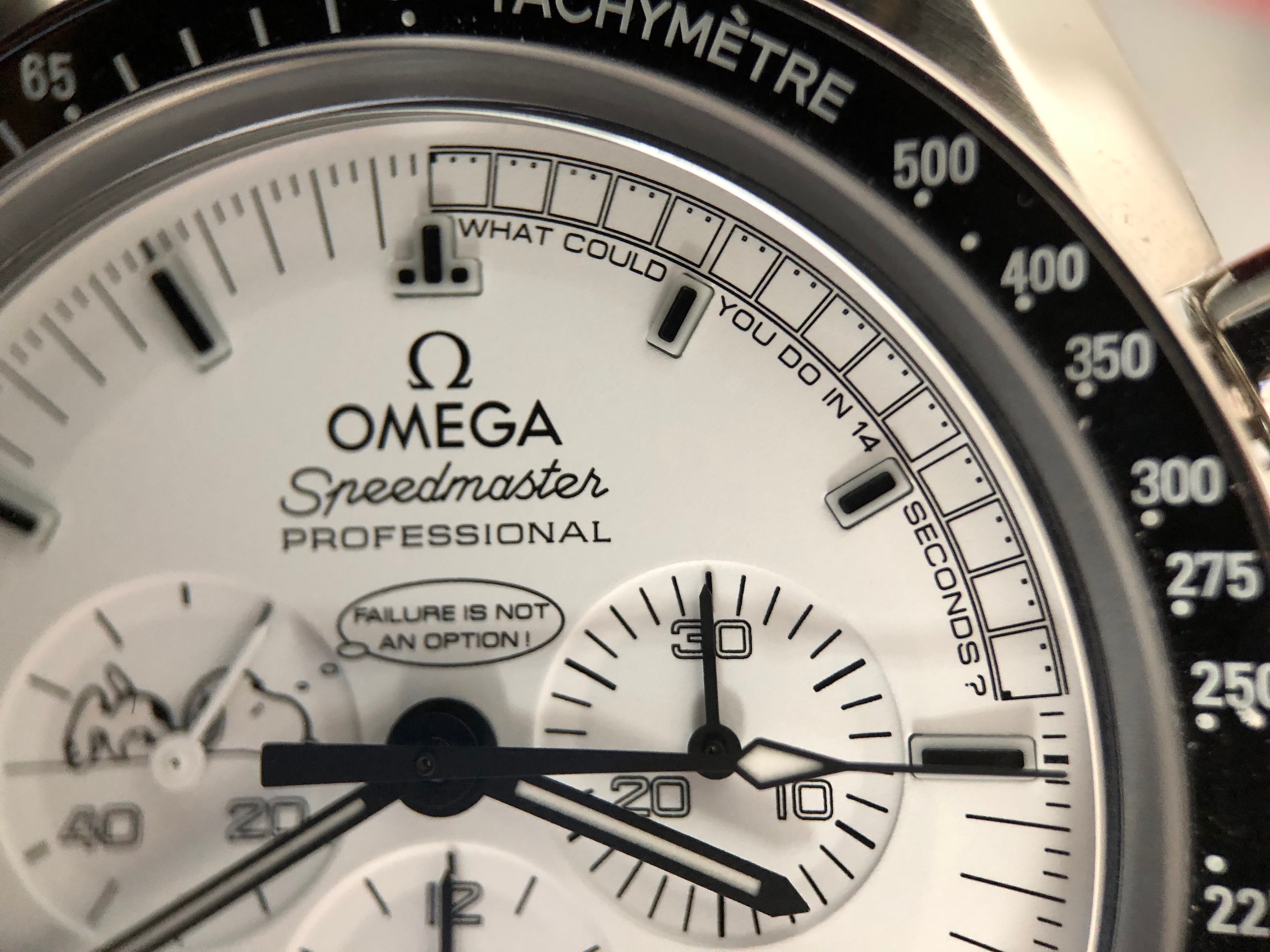 As the Speedmaster Apollo 13 Silver Snoopy Award Chronograph was introduced by Omega back in late 2015, some of you were maybe not aware of the heritage of this rare watch. Now you know why the dial shows those 14 small squares between zero and 14 seconds combined with the text “what could you do in 14 seconds?”. 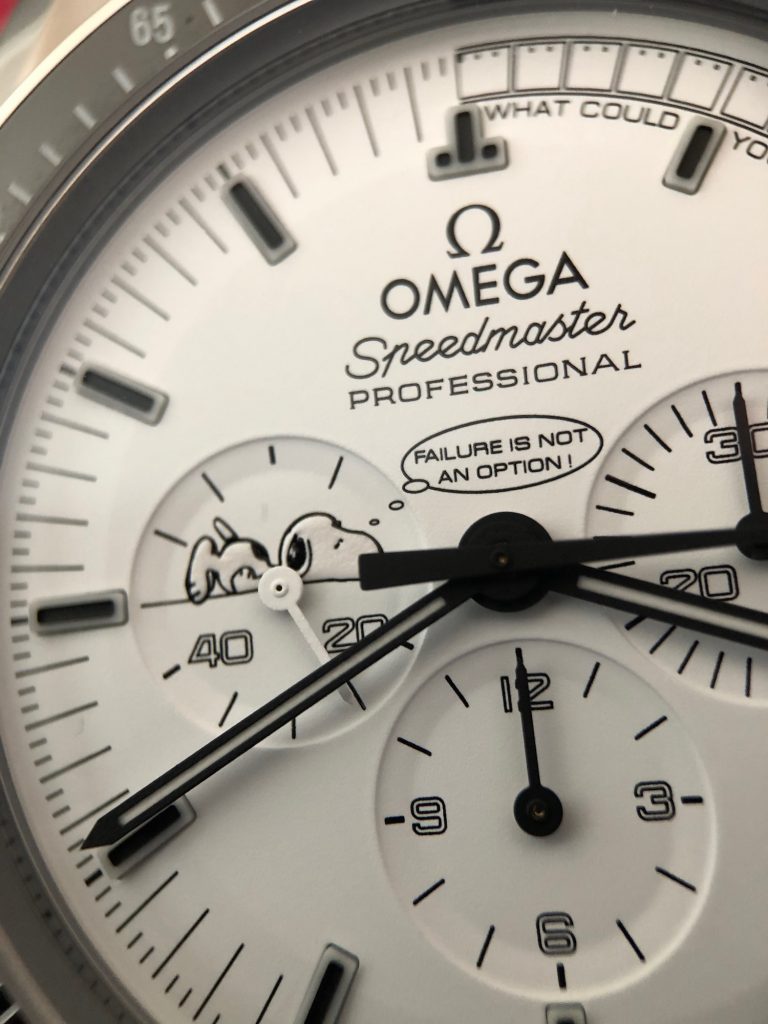 But why is Snoopy, flat-out on his belly, showing that text balloon with “`Failure is not an option”? Well, that’s only a reference to what actor Ed Harris said, playing flight director Gene Kranz, in the 1995 Apollo 13 movie. There’s no evidence that these words were actually spoken by Kranz at the Houston control center during the Apollo 13 mission. 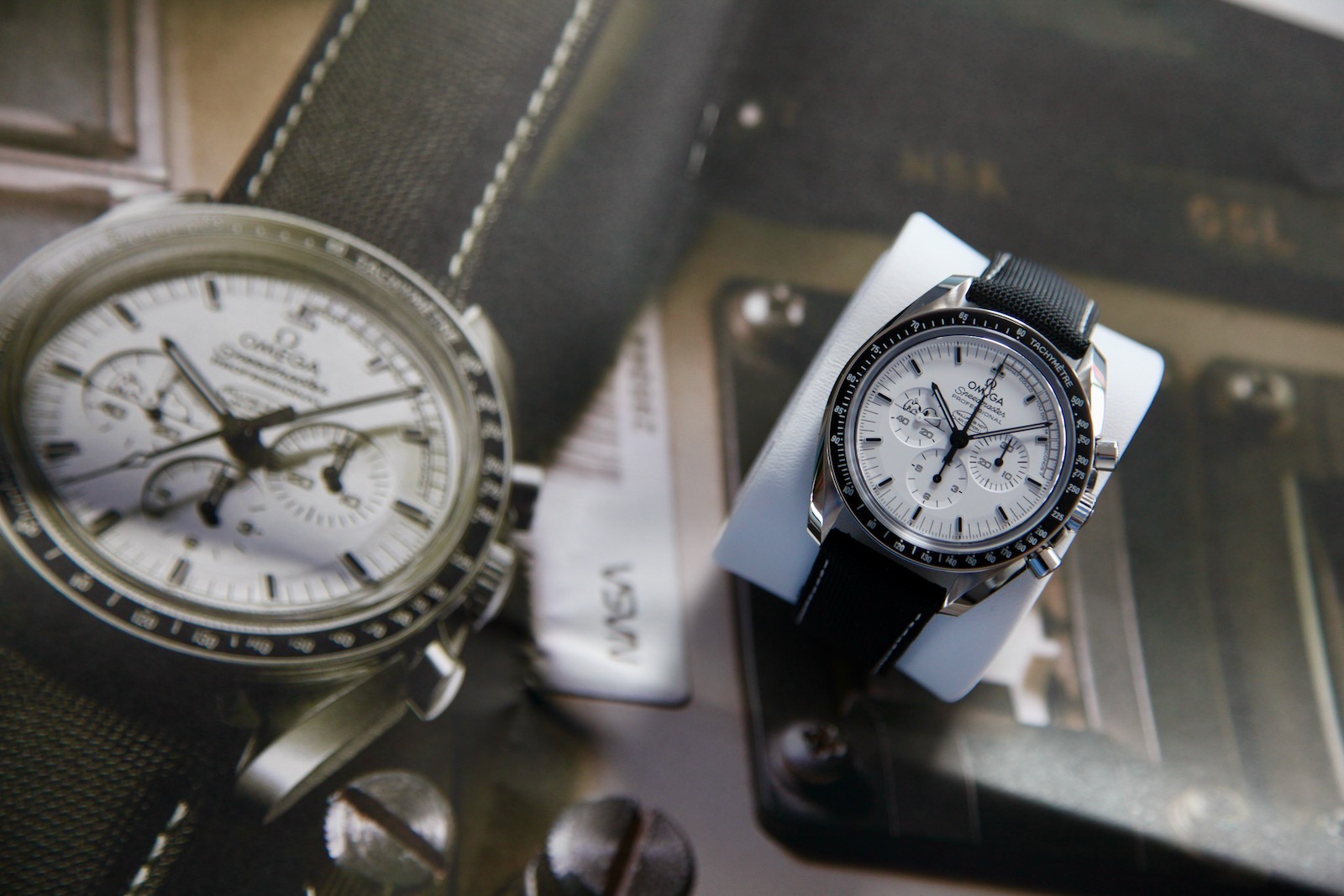 It does however add extra charm to the Super-LumiNova filled Snoopy pictured at 9 o’clock. In combination with the ultra white dial and the black varnished hands, this Speedmaster has a black ceramic bezel with a Super-LumiNova tachymeter scale. It’s renders the Speedmaster into a wonderful example of monochrome power. 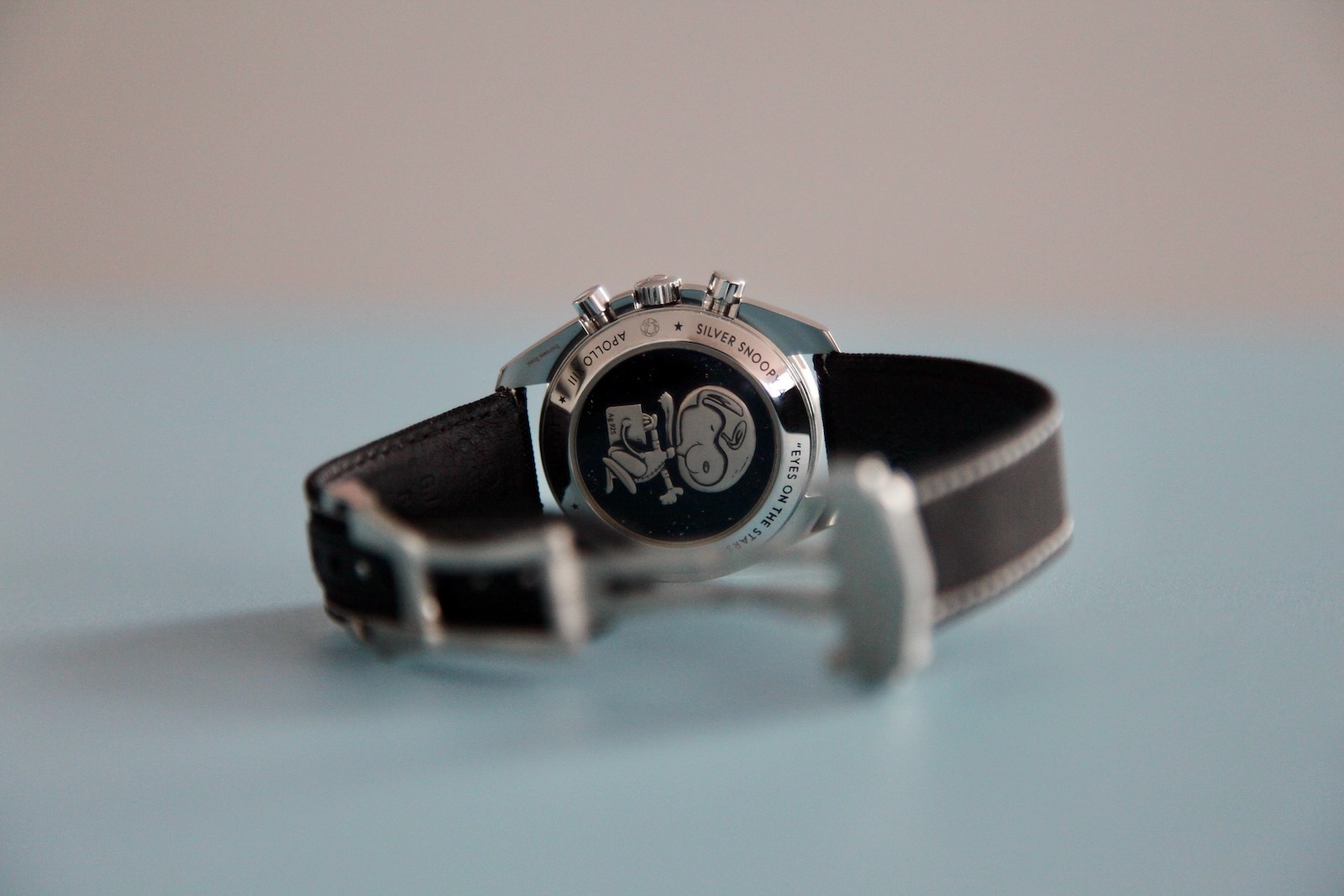 And then there’s still the enamelled case-back. It contains a 925 sterling silver medaillon depicting exactly the same Snoopy that can be found on the official Award pin. Snoopy is wearing a space suit and carrying a portable air conditioning. 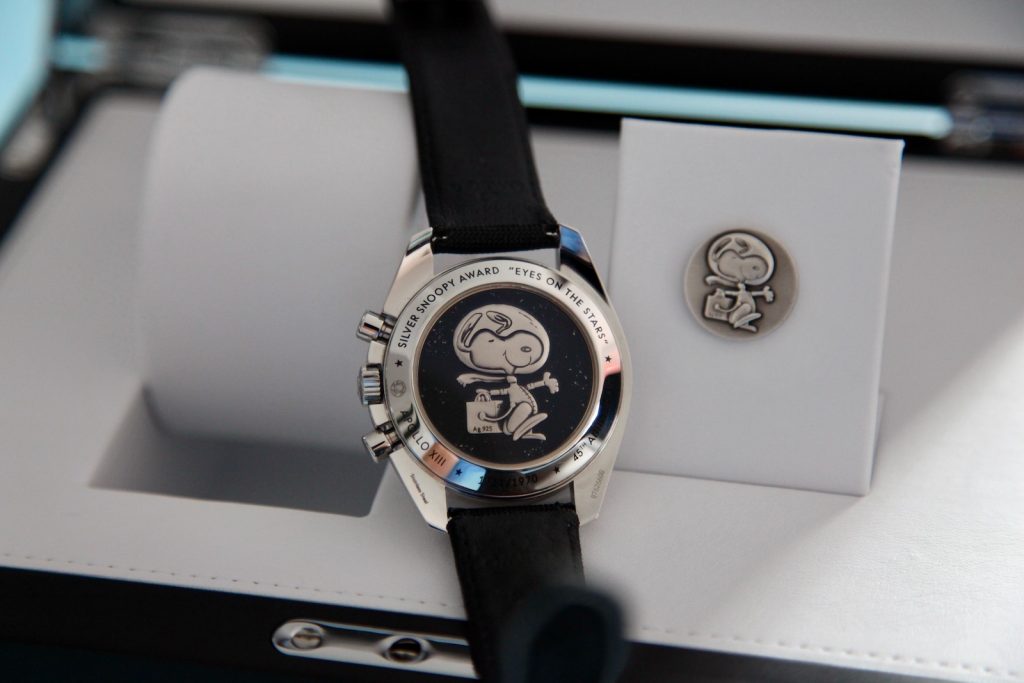 This partial handcrafted case-back adds a lot to the uniqueness of this watch and is circumvented with some text fragments making reference to Apollo 13 and “eyes on the stars”, probably referring to President Roosevelt’s famous quote “Keep your eyes on the stars and your feet on the ground”.

Furthermore the back also shows which of the 1970 produced pieces you are proudly wearing. 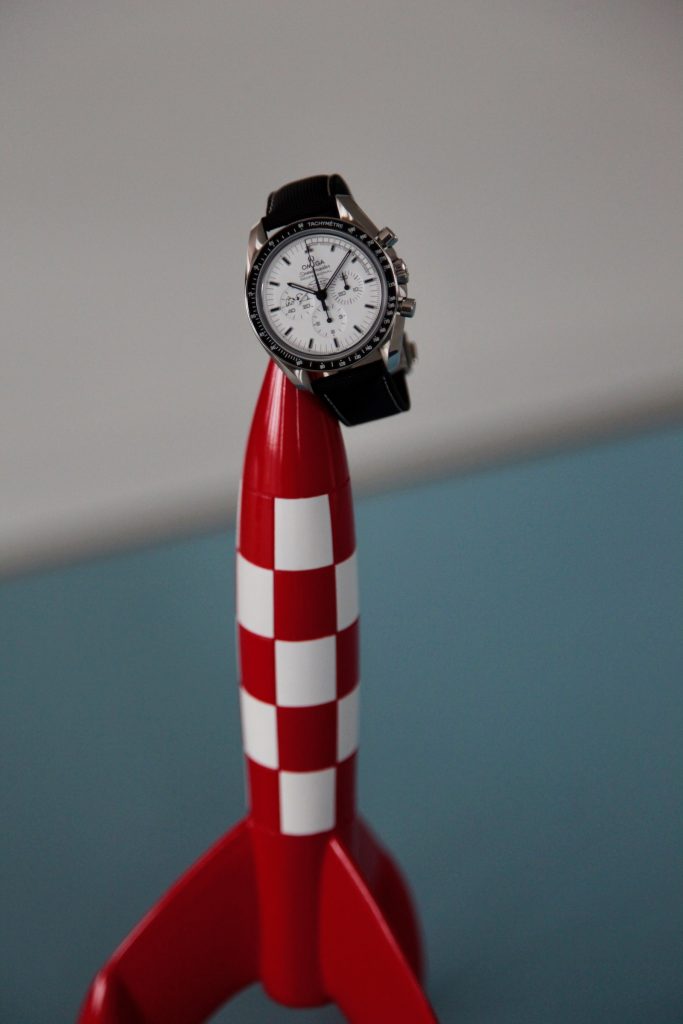 Five years after its introduction the Silver Snoopy is definitely one of the most sought after Speedmaster variations.