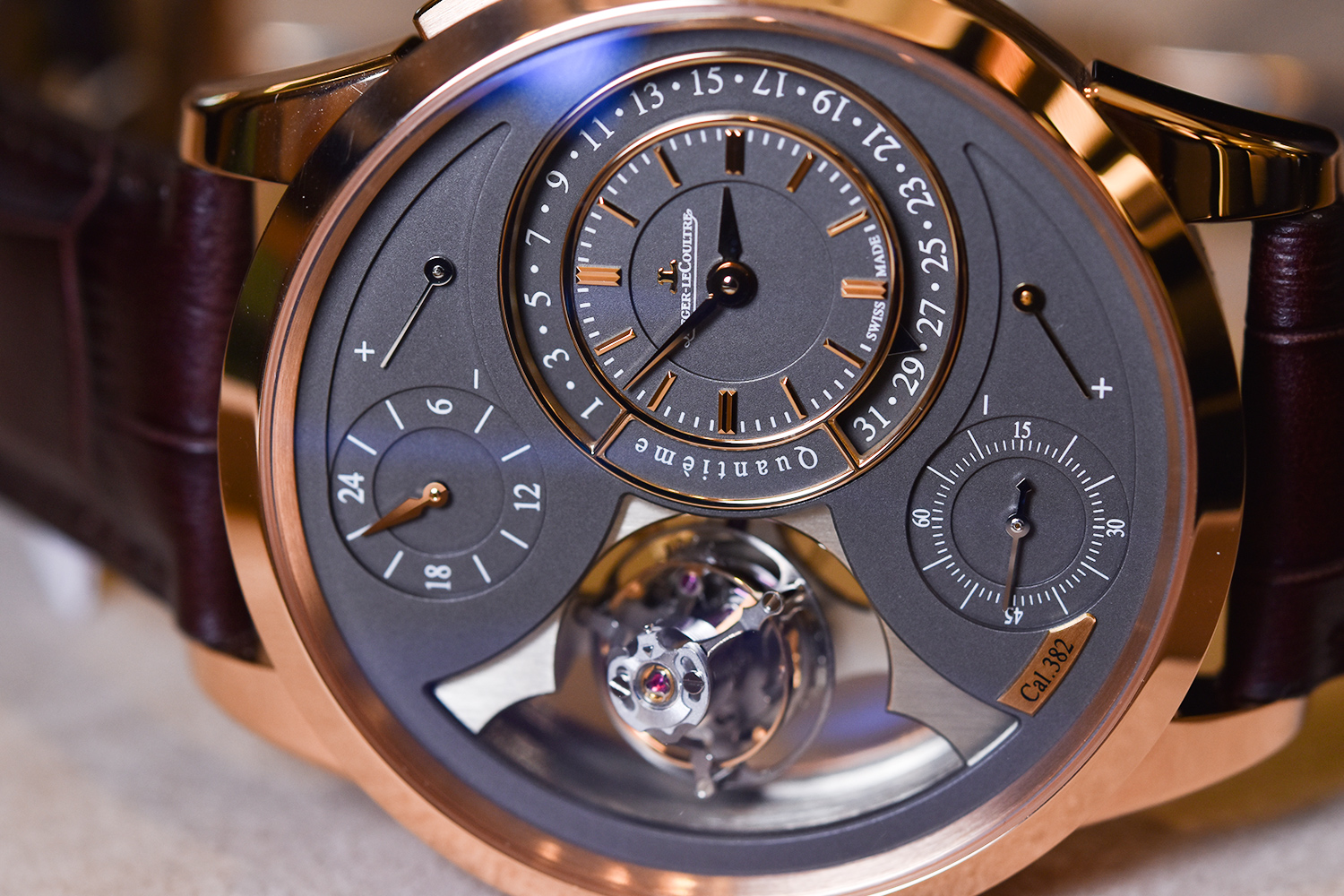 One glance at the dial and you immediately see you’re dealing with an extraordinary timepiece here.

First, thing you’ll notice is the tourbillonTourbillon A tourbillon is a complication in a mechanical watch that is designed to improve the accuracy of the watch by compensating for the effects of gravity on the balance wheel and escapement. It consists of a rotating cage that holds the balance wheel and escapement, which rotates on its own axis once per minute. This rotation helps to average out the positional errors caused by gravity, making the watch more accurate [Learn More] which  “rotates on two axes, in line with the carriage and at a second angle of 20°. By combining the two, the negative effects of gravity are diminished.” When moving it looks very much like the movement you would see when observing a spinning-top spin away. At the core of the tourbillon you’ll find a rather extraordinary cylindrical balance springHairspring The hairspring is a thin spring in a mechanical watch movement that is connected to the balance wheel. The balance wheel oscillates back and forth at a consistent rate, and the hairspring helps regulate these oscillations. The hairspring works by applying a restoring force to the balance wheel, which helps to keep the balance wheel oscillating at a consistent rate. The hairspring is also known as a balance spring. [Learn More] for further accuracy. The tourbillon is just as impressive when looked at through the back. 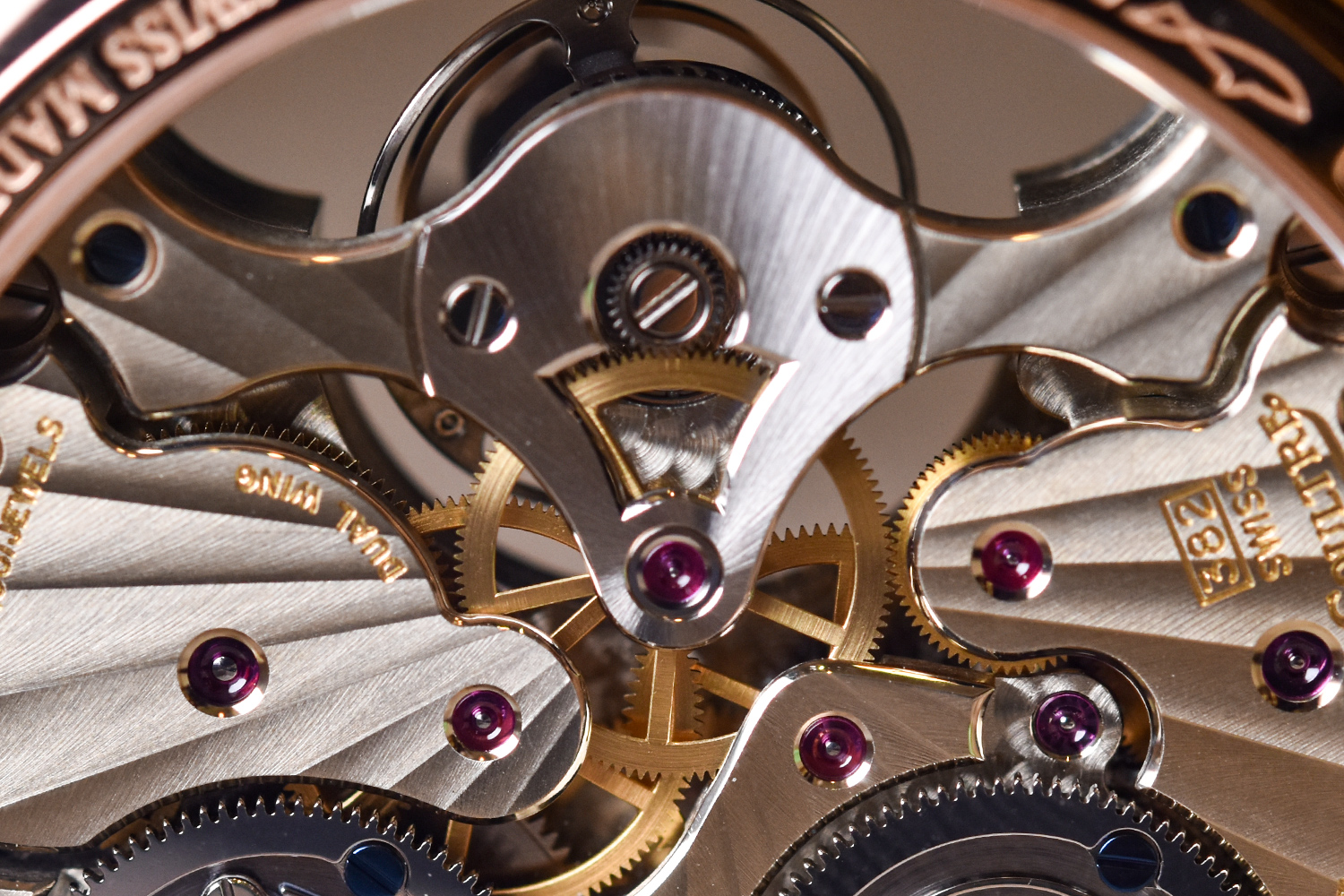 Notice also the very highly finished movement & details. Make no mistake about it, this is watchmaking of the highest order on display. The artistic minds among you will perhaps also have noticed the bridgeBridges The bridges of a watch movement are the metal plates that hold the wheels and other components of the movement in place. They are attached to the main plate of the movement with screws. Bridges are used to support the balance wheel, the escapement, the mainspring barrel and other elements. Combined with the main plate they are the foundation of any watch movement. [Learn More] supporting the tourbillon has a wing-like shape. This is a nod to the ‘Dual Wing’ concept.

The Dual wing concept centers around two energy sources, double barrelBarrel The barrel is a cylindrical container that holds the mainspring. The barrel is connected to the winding mechanism. The winding mechanism rotates the barrel, which in turn winds the mainspring. [Learn More] if you will. However, you can tell that it isn’t a standard double barrel setup by the indication of two (and not one) power reserveRéserve de marche Also known as Power Reserve. A watch's power reserve refers to the amount of time a mechanical watch can run without being wound. The power reserve of a mechanical watch can vary depending on the size of the mainspring, the efficiency of the gear train, and the rate at which the mainspring releases energy. If a watch has a Power Reserve 'complication' it simply means that the status of the power reserve can be seen on the watch itself (either on the dial or movement side of the watch). [Learn More] indicator on the dial. One barrel is focused on powering the regulating organ (the tourbillon) and the other on the complications. This further increases the overall accuracy of the watch. For this watch, there are no half measures when it comes to achieving highest possible accuracy. On the dialside the power reserves are smoothly integrated. Those two symmetrically positioned power reserve indicators somehow elevate the dial without overcrowding it, which is often the case with even a single power reserve indicator. That’s also the reason why I prefer a power reserve to be indicated on the back of the watch. Here however, it looks dashing on the front and the overall dial symmetry is just perfect. 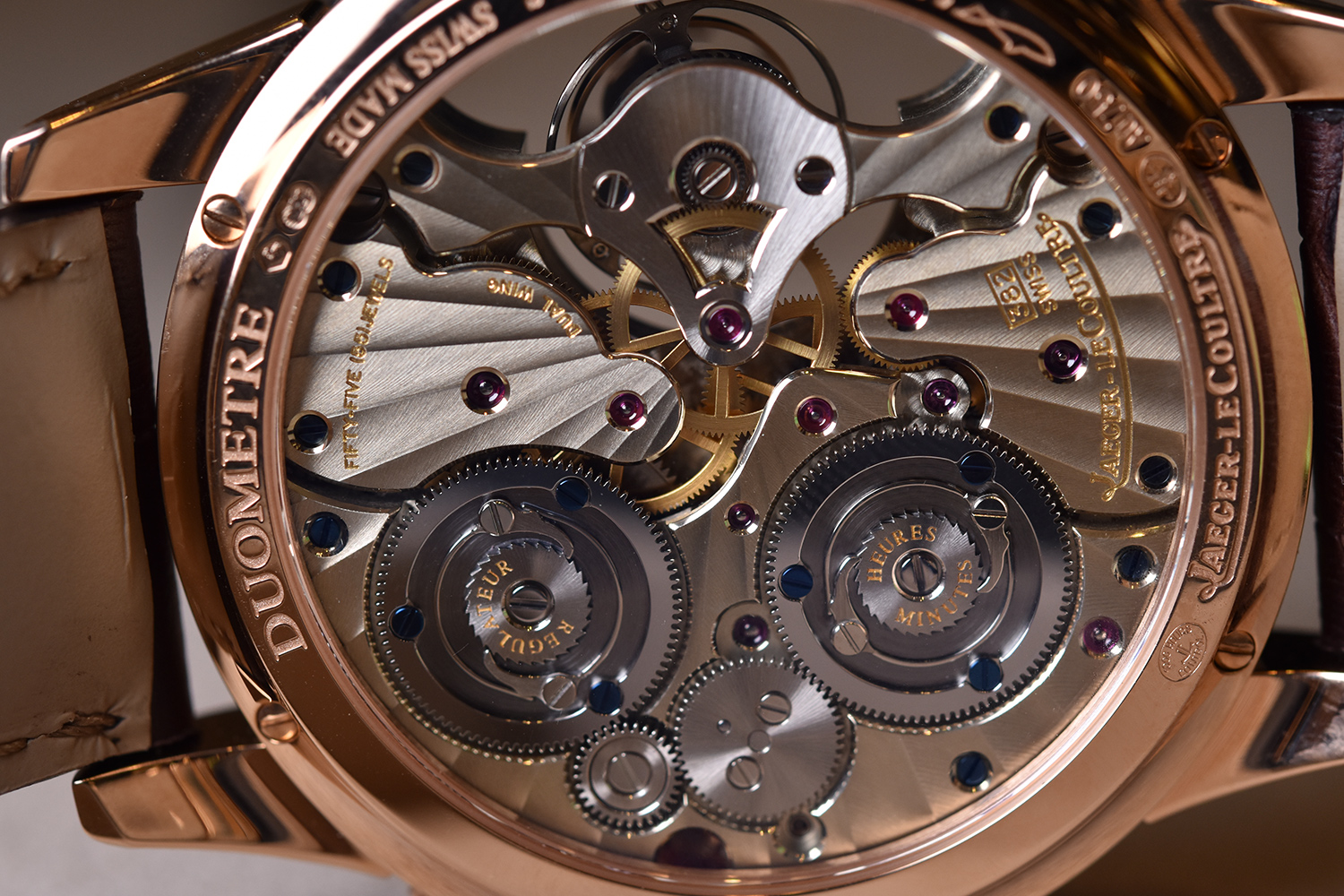 The movement is beautifully designed and really shows you just how much JLC masters the art of watchmaking. Small detail but I think the côtes soleillées add quite a bit of grandeur to the already grand calibre. Much to nobody’s surprise, the anglageAnglage Anglage is a decorative technique used in the finishing of mechanical watch movements. It involves beveling, polishing, and chamfering the edges of various movement components, such as the main plate, bridges, and gears, to create a smooth and polished look [Learn More], the polished sinks, the blued screwsBlued Screws Not all blue screws are equal. Traditionally heat-blued screws, involves... heat! The blue color is achieved by heating the screws to a high temperature in a controlled and clean environment. This process produces a thin layer of oxide on the surface of the screws, which gives them their distinctive blue color. It is not uncommon to find blue screws on a watch movement that were simply chemically treated, and not heat-blued. [Learn More] and all, are of the highest grade. C’est beau! Take also for example the barrels, usually not a great deal of fun to look at in most calibres. Absolutely gorgeous here. I also appreciate that the JLC wizards indicate what exactly each barrel powers in the lovely gold text.

When looking at the dial with that extra bit of background knowledge, I think you can appreciate how well integrated & designed everything is. There is a LOT happening on the dial, yet, it all feels superbly balanced. The date, the time & the travel time – perfectly executed. The twin power reserve indicators, gloriously well done, especially set in the slightly lower segments wrapping around the time display circle. And then, that tourbillon dancing away. Money can perhaps not buy you happiness, but it sure can buy you a very fine Jaeger-Lecoultre.