Skip to content
This is as much a Hands-On as it is a Throwback article, because the 5101P isn’t a new watch by any stretch. This understated and salmon dialed beauty was released 15 years ago. The 5101P belongs to Patek’s family of Grand Complications, and discretely yet resolutely defines their take on Haute Horlogerie. 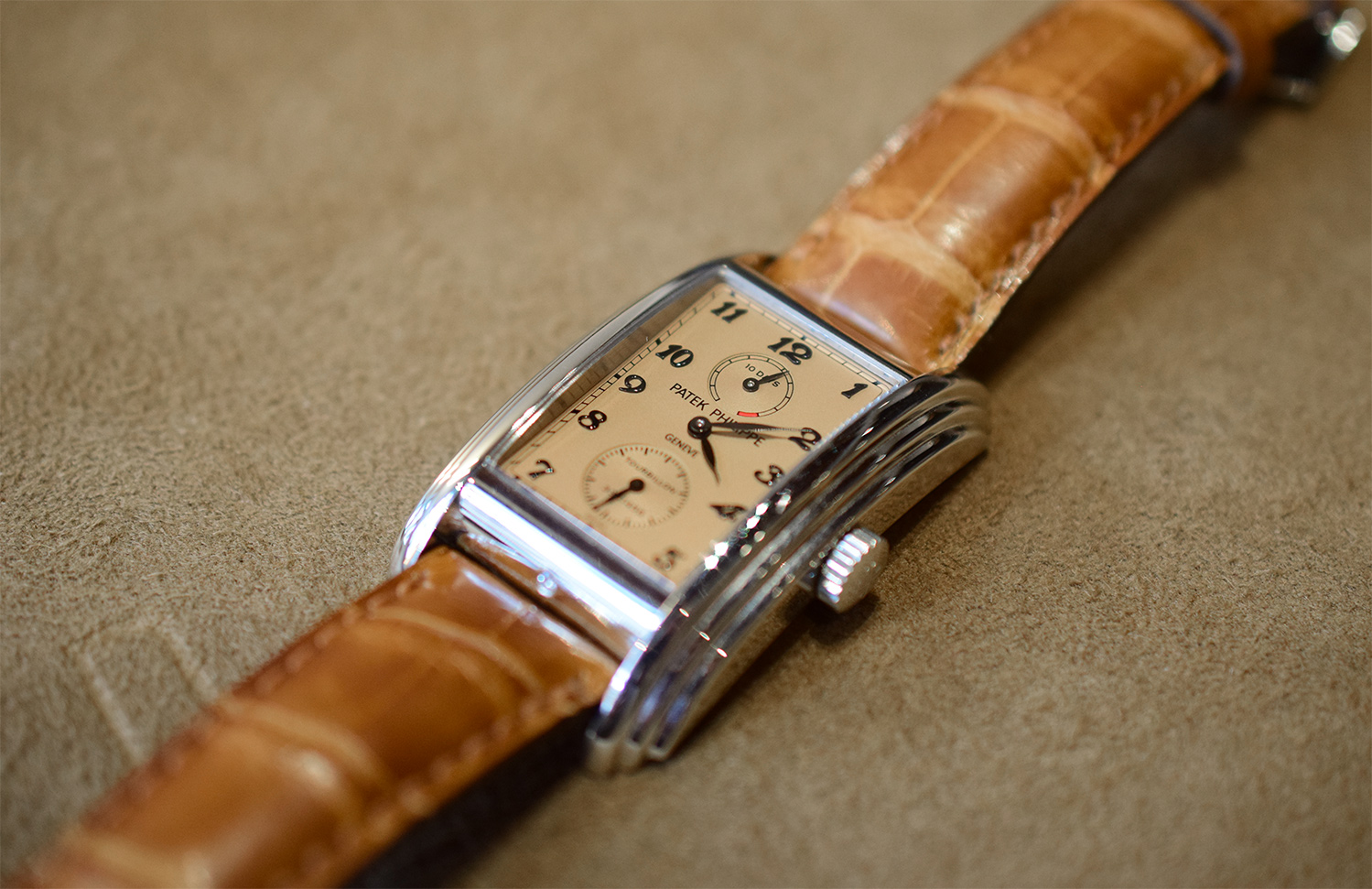 Let’s begin with the dialside. First thing you’ll notice is that it has a Salmon dial. What is not at all obvious from any reasonable distance, is that on the dial it discretely states that it houses a 10 day Power ReserveRéserve de marche Also known as Power Reserve. A watch's power reserve refers to the amount of time a mechanical watch can run without being wound. The power reserve of a mechanical watch can vary depending on the size of the mainspring, the efficiency of the gear train, and the rate at which the mainspring releases energy. If a watch has a Power Reserve 'complication' it simply means that the status of the power reserve can be seen on the watch itself (either on the dial or movement side of the watch). [Learn More] TourbillonTourbillon A tourbillon is a complication in a mechanical watch that is designed to improve the accuracy of the watch by compensating for the effects of gravity on the balance wheel and escapement. It consists of a rotating cage that holds the balance wheel and escapement, which rotates on its own axis once per minute. This rotation helps to average out the positional errors caused by gravity, making the watch more accurate [Learn More]. This watch, as you can see above, is by no means an oversized piece. Yet both a 10 day power reserve and a tourbillon generally take up quite a bit of space. Patek however managed to fit both of these complications in a small & wearable package, very noteworthy indeed. 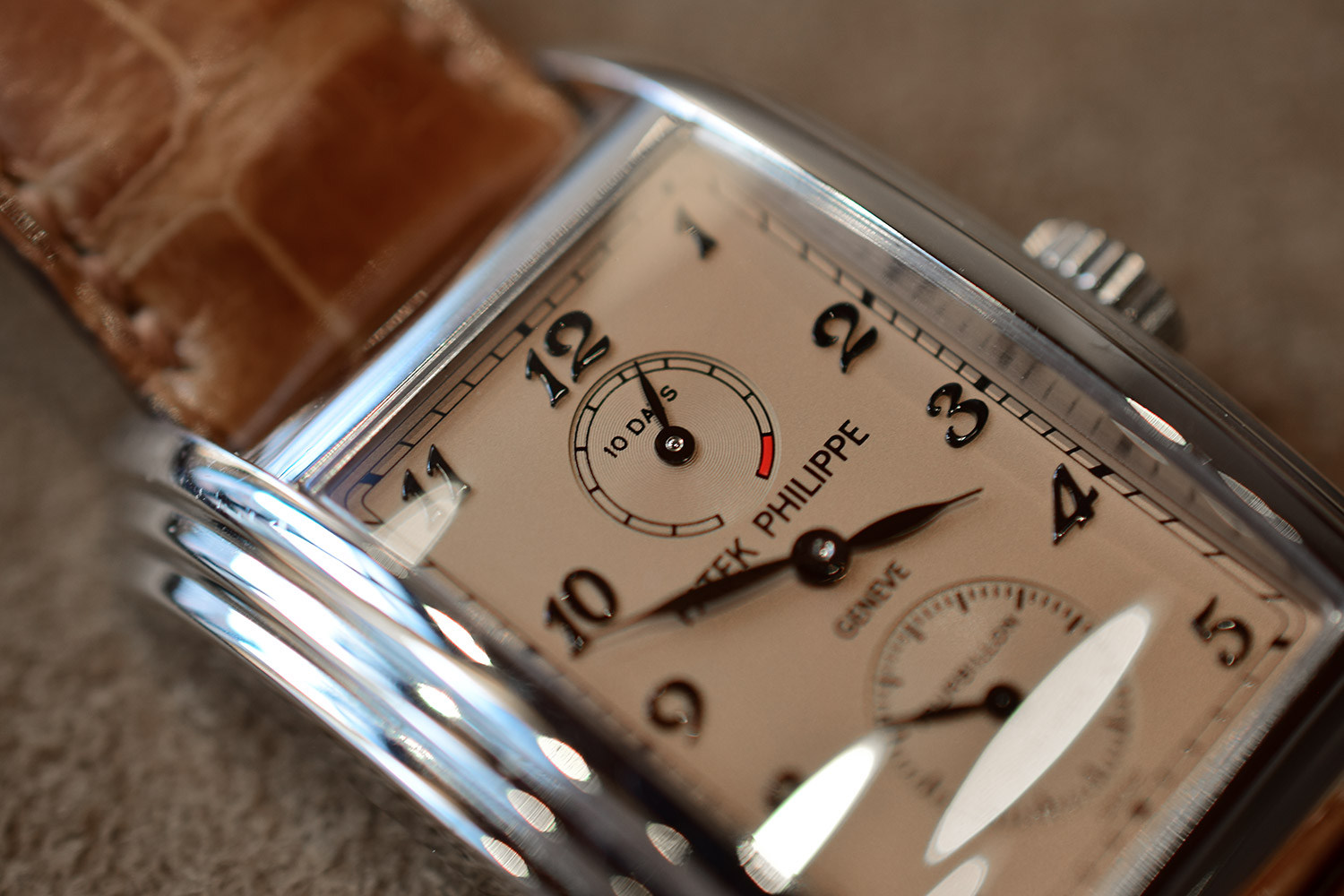 Where most tourbillon watches will show the tourbillon through the dial, the tourbillon here is only visible when you flip the watch over. A little treasure, hidden below the dial. I’ll keep it hidden from you just a little longer, as we first spend some time with the dialside. The dial has all the whistles & bells you’d want on such a watch. The Breguet numerals aren’t just painted on. These are applied Black oxidized gold numerals and are flanked by black oxidized feuille hands. It works extremely well and fits the overall dial and watch design. Combining these details twith the case shape, you really do get an Art Deco vibe. 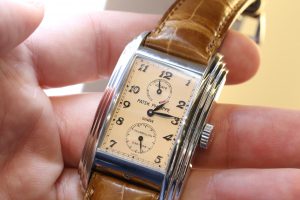 Salmon dials at Patek tend to go hand in hand with precious metal cases (Platinum in this case), so there’s that too. If you’re wondering how you can easily tell if you’re dealing with a Platinum Patek, you can easily tell as they’ll have a diamond set in the case/bezel: 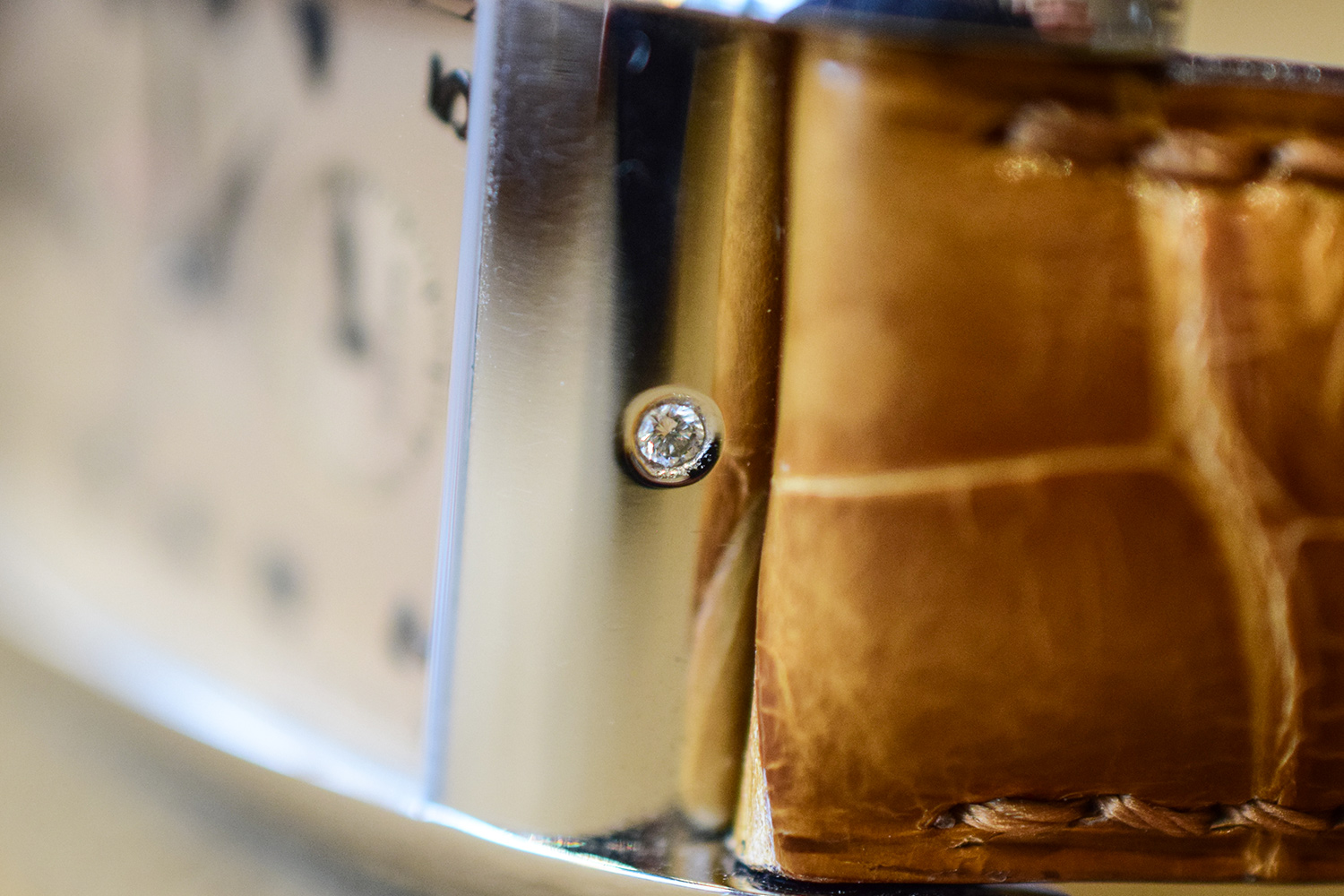 The real magic happens when you flip this watch over, and then take a few minutes to absorb all the extravagance that is on display. Everything, is finished to such a high standard. Most visible are the gold chatons which are plentiful, the Geneva stripesGeneva Striping Geneva Striping is a decorative technique used in the finishing of mechanical watch movements, it's also known as "Côtes de Genève". It is a type of linear graining that involves making small, parallel lines on the surface of  movement components, such as the main plate using a specialized tool. [Learn More] shining bright, and all the edges which are gorgeously finished. Also keep in mind that there are all the others parts hidden under the bridgeBridges The bridges of a watch movement are the metal plates that hold the wheels and other components of the movement in place. They are attached to the main plate of the movement with screws. Bridges are used to support the balance wheel, the escapement, the mainspring barrel and other elements. Combined with the main plate they are the foundation of any watch movement. [Learn More] you can’t even see – these are all finished to the same high level: 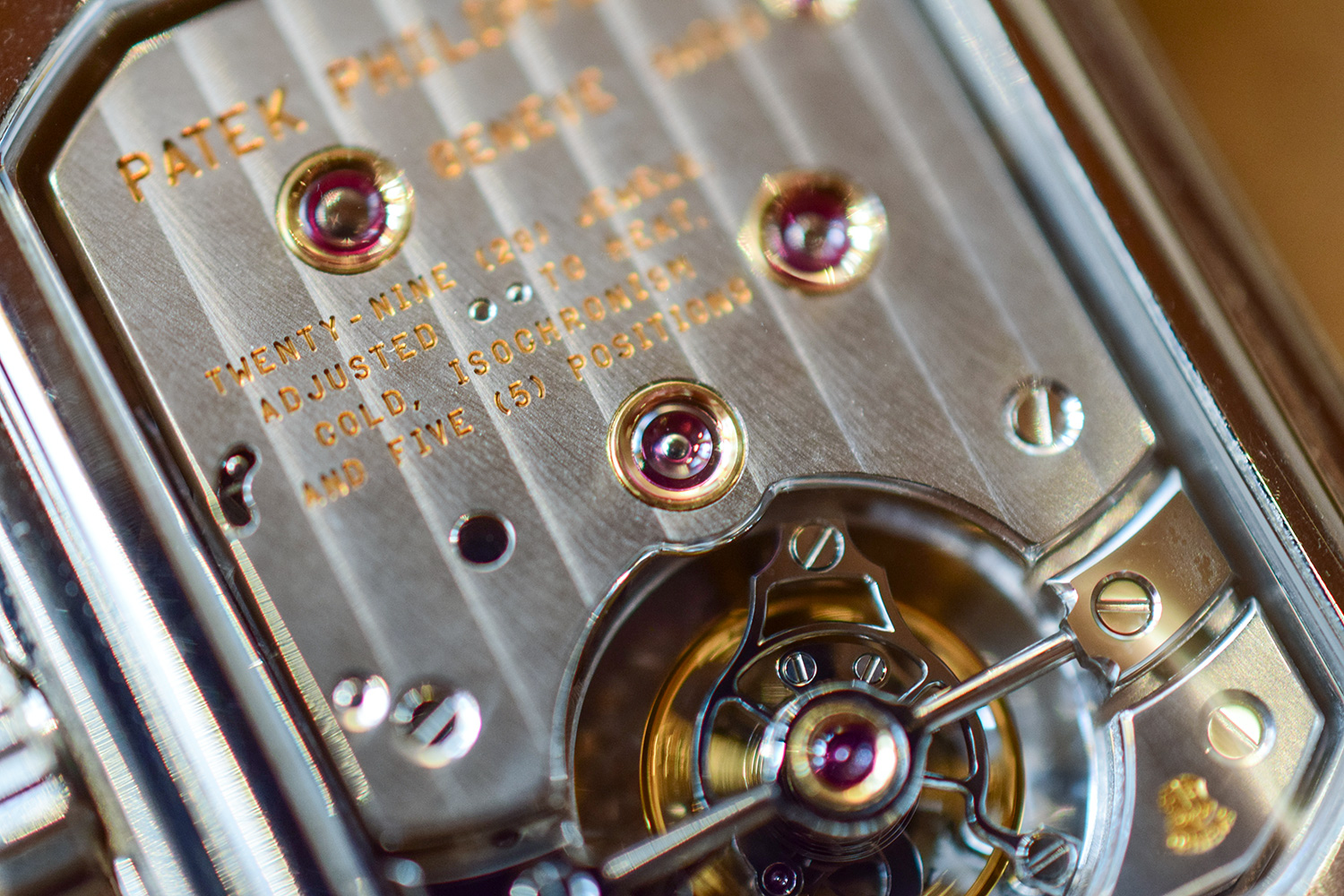 Visibly, the star of this watch is the Tourbillon. And when looking at it under magnification it’s absolutely astonishing and a real testament to true craftsmanship. But before we go there, you may wonder ‘Tourbillon, what’s so special about that?’. Well, you have to keep in mind this was 2003. Tourbillons were not what they are today, and Patek had to essentially rework the entire base movement (28-20/220) to somehow accomodate a Tourbillon. In addition, in those days a 10 day PR Tourbillon in a wristwatch was pretty much cutting edge watchmaking. 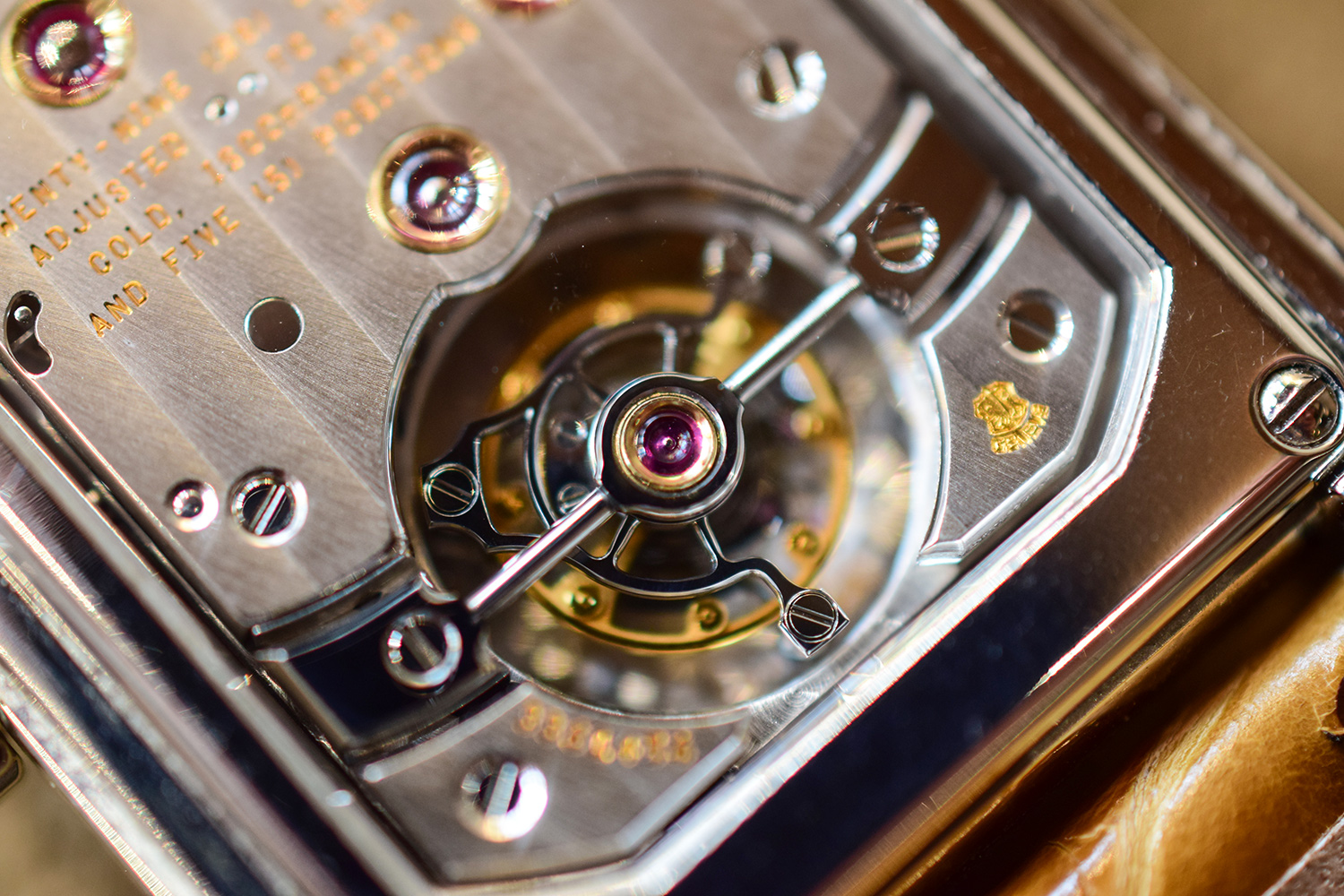 Notice how Patek goes the extra mile (and then some) when it comes to finishing. Check out those black polished Tourbillon bridgesBridges The bridges of a watch movement are the metal plates that hold the wheels and other components of the movement in place. They are attached to the main plate of the movement with screws. Bridges are used to support the balance wheel, the escapement, the mainspring barrel and other elements. Combined with the main plate they are the foundation of any watch movement. [Learn More]. And how about that nearly superhuman finishing of the tourbillon cage. Keep in mind that they achieve this result (including the rounding) by hand. This is the type of finishing you don’t see every day, to say the least. Notice also how this Patek still has the Geneva Seal. The Patek Seal was introduced about six years later. 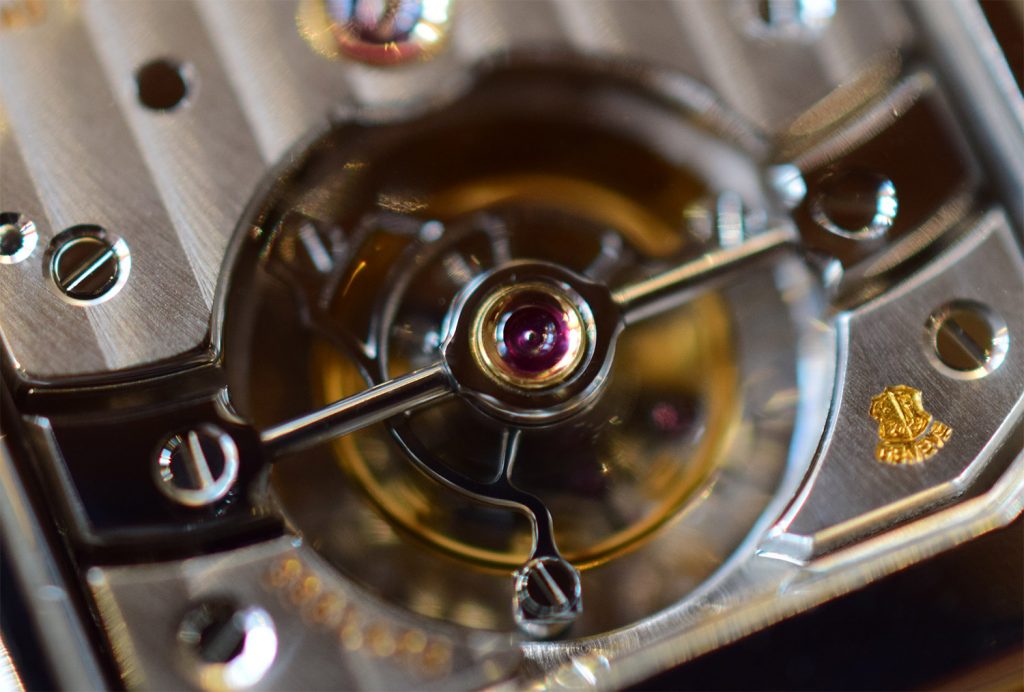 One can only wonder how many hours, days & weeks it took exactly to get every single piece finished at such a high & precise level. Not to mention the time spent figuring out how to ‘upgrade’ the movement with the 10 day PR Tourbillon in a time where a Tourbillon in a wristwatch was new territory (as it was for Patek).

This is quite simply a rare piece of watchmaking history, and it’s oh so glorious. 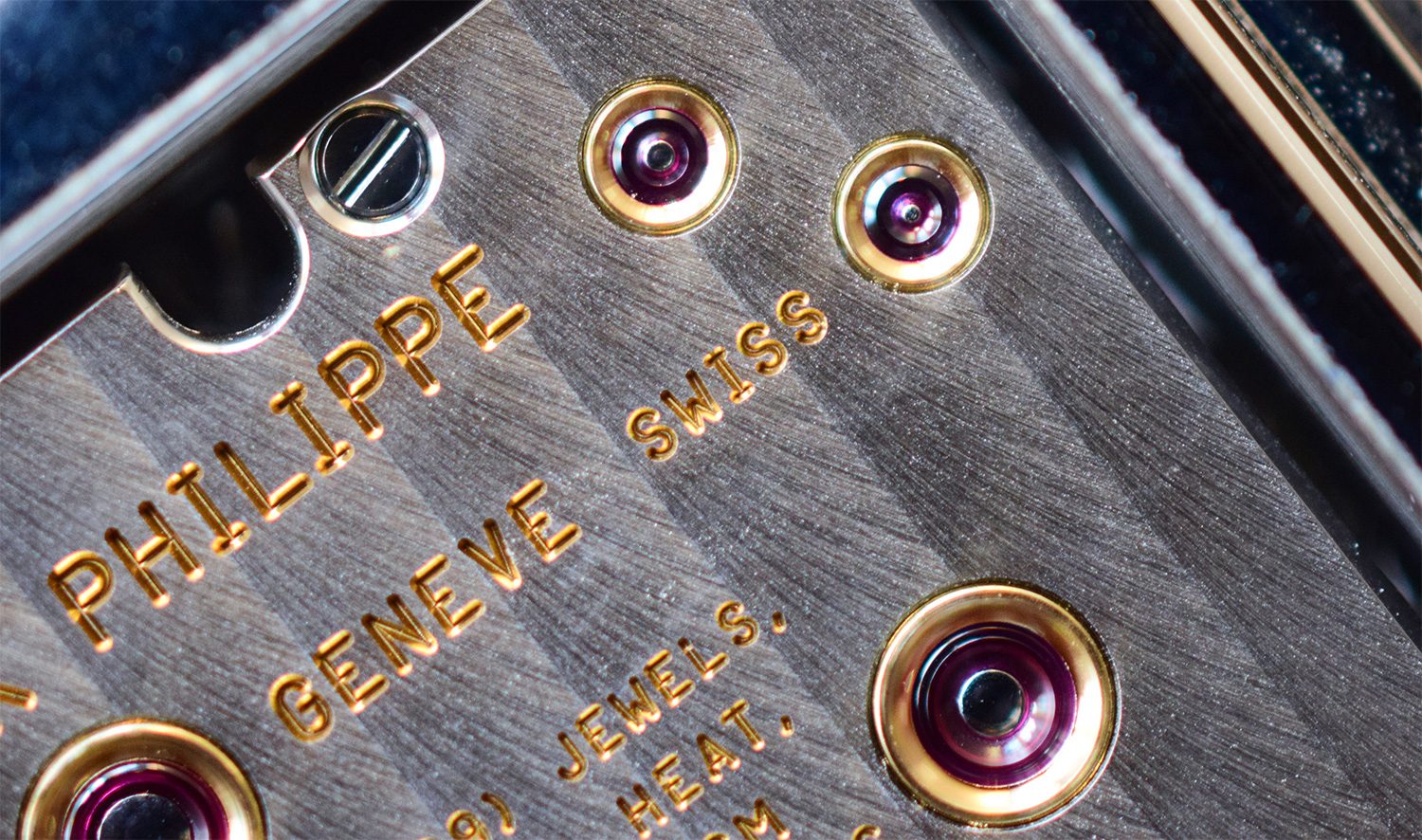